Alfred Neubauer (1891-1980), also known as Friedl, was the racing manager of the Mercedes-Benz Grand Prix team for almost thirty years, between 1926 and 1955, leaving a trail in motorsport which is still visible today in every single race all over the world.

He is most known as a ‘father’ of ‘Silver Arrows’, what was a nickname for Mercedes-Benz and Auto Union Grand Prix cars during the 1930s and then the nickname of Daimler/Mercedes team in the 1950s. This term is still in use today for Mercedes F1 team’s cars.

Besides leading Silver Arrows through F1 and sports car races, Neubauer revolutionized racing events by inventing a system which is today normal in all races, with flags and boards which give informations to drivers during the race. 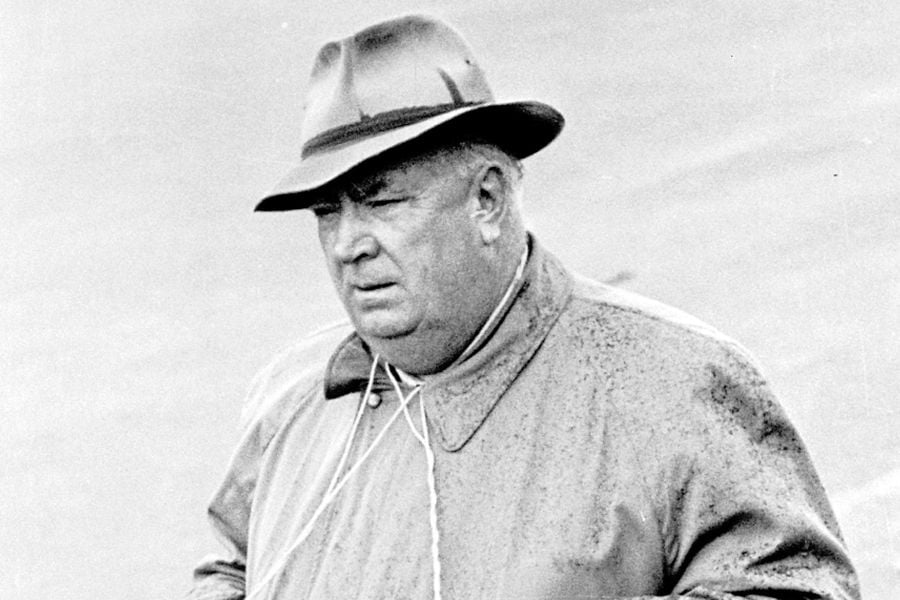 Neubauer was working together with Ferdinand Porsche

Alfred Neubauer was born on March 29, 1891, in Neutitschein in the Austro-Hungarian Empire. That town is today Novy Jičin in the Czech Republic. Alfred, who was also known as Friedl among friends and family, was a son of a furniture maker but he develops an interest in motor vehicles while he was serving in the Imperial Austrian army.

After the World War I, he gets a job as a chief tester in the Austro-Daimler. His chief was Ferdinand Porsche. In 1923, they moved together to the Daimler Works in Stuttgart, what later became Daimler-Benz in 1926. 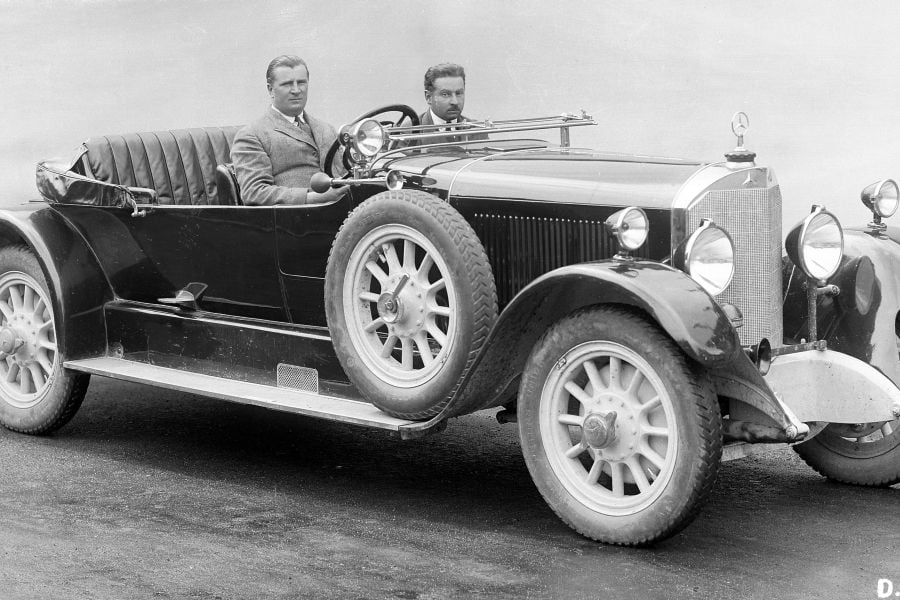 In 1922, Neubauer started to race but he wasn’t successful so he decided to stop his racing career in 1926 and to become a team manager. He was calling his position the ‘Rennleiter’, what literary means the ‘racing manager’, not a team manager.

Because of that, he confused everybody at the Solituderennen at Solitudering near Stuttgart in September 1926  when he said that he was the ‘Rennleiter’. The chief steward of the race ordered him to leave the track. 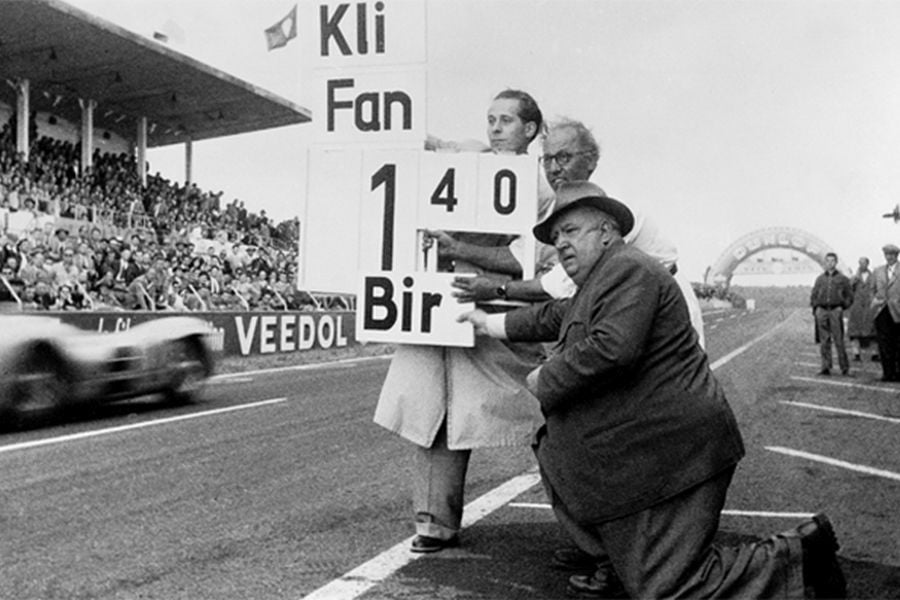 Revolutionary inventor on the race track

What was Neubauer doing at Solituderennen was a revolution in motorsport because he was inventing a new system of giving informations to drivers. In those days, racing drivers were just driving and trying to survive until the end of the race, not having a clue what is happening around them and not knowing what is their position in a race.

Neubauer changed that by inventing a thought-out system with boards and flags, giving informations to drivers. First, only the Mercedes-Benz drivers were using that system but soon it spread all over the racing community. 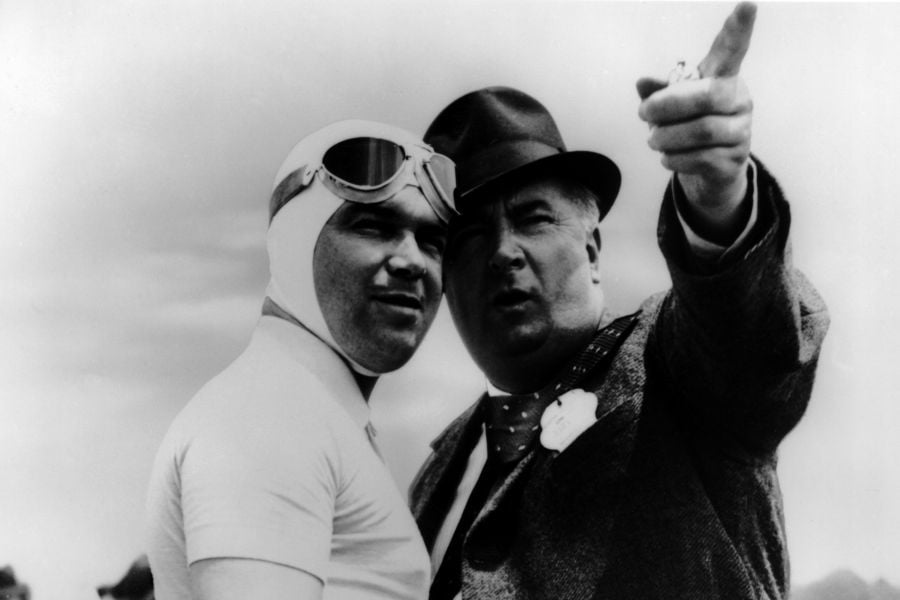 In the late 1920s and early 1930s, Mercedes-Benz team was using SS and SSK race cars. Afer that, the W25, W125 and W154 came. Probably the greatest driver of that time was Rudolf Caracciola, who raced with Mercedes since 1926.

Not always was everything going well. Mercedes-Benz officially withdrew from racing in 1931, citing the global economic downturn as the main reason. However, the company continued to support Caracciola and a few other drivers, retaining Alfred Neubauer as a chief of the ‘independent team’. That year, Caracciola won Mille Miglia in a Mercedes-Benz SSKL, what was the first win for German manufacturer in the famous race.

The rise of the Nazi Party in January 1933 gave German manufacturers, notably Mercedes-Benz and Auto Union, an opportunity to return to premium racing competitions. They were developing their racing projects during 1933, returning to racing in 1934. Then the term of ‘Silver Arrow’ was born. 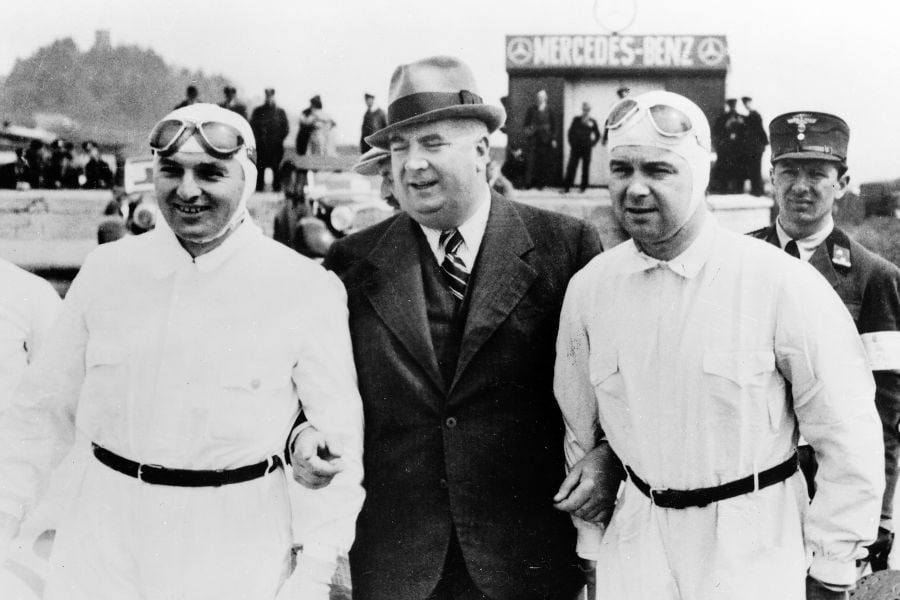 How the term ‘Silver Arrow’ was born

Alfred Neubauer explained how the term ‘Silver Arrow’ was born in his biography, which was published in 1958. The story says that in 1934, they were forced to strip some weight off the brand-new Mercedes-Benz W25 before the scrutineering prior to the Eifelrennen at the Nürburgring.

Neubauer and his driver Manfred von Brauchitsch (who also wrote his memoirs) claimed that they had the idea of removing all the white paint from the bodywork. The silver-coloured aluminum-bodied W25 won the race and the nickname Silver Arrow (German: Silberpfeil) became popular.

Soon after that, Auto Union also raced with silver cars, so the cars of both companies were called ‘Silver Arrows’. The usage of polished and non-painted aluminum panels was understandable because they were really saving the weight, so the aircraft industry also built planes out of aluminum. 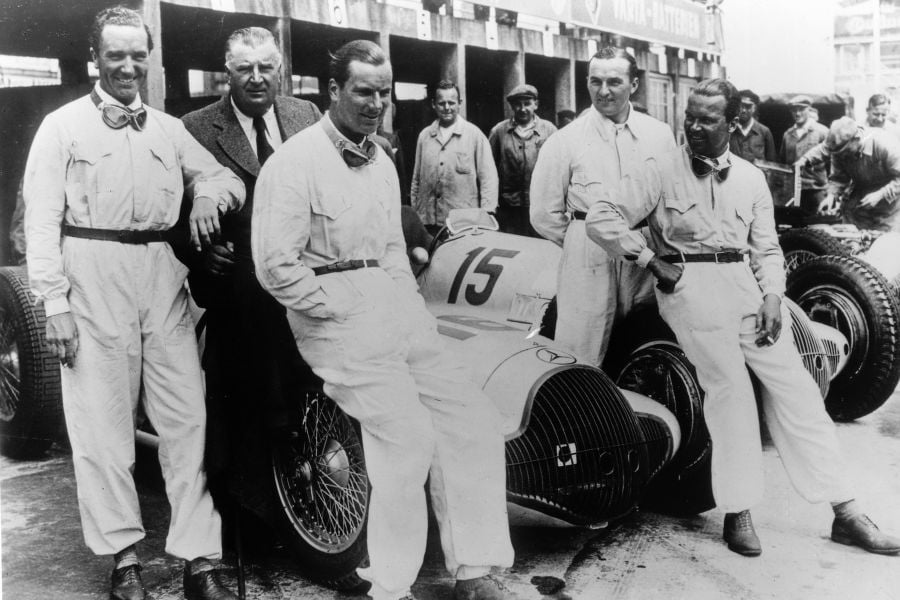 From 1935 to 1939, Mercedes-Benz and Auto Union dominated in the European Championship and non-championship Grand Prix races. Rudolf Caracciola brought three titles to Mercedes, Bernd Rosemeyer was a champion in 1936 for Auto Union while the shortened 1939 championship ended controversially with Hermann Lang’s title for Mercedes.

During all those victorious years, Alfred Neubauer built an impressive organisation, gathering not just fantastic drivers but also having trained individuals in a pit crew, what gave the team an advantage over its rivals many times. 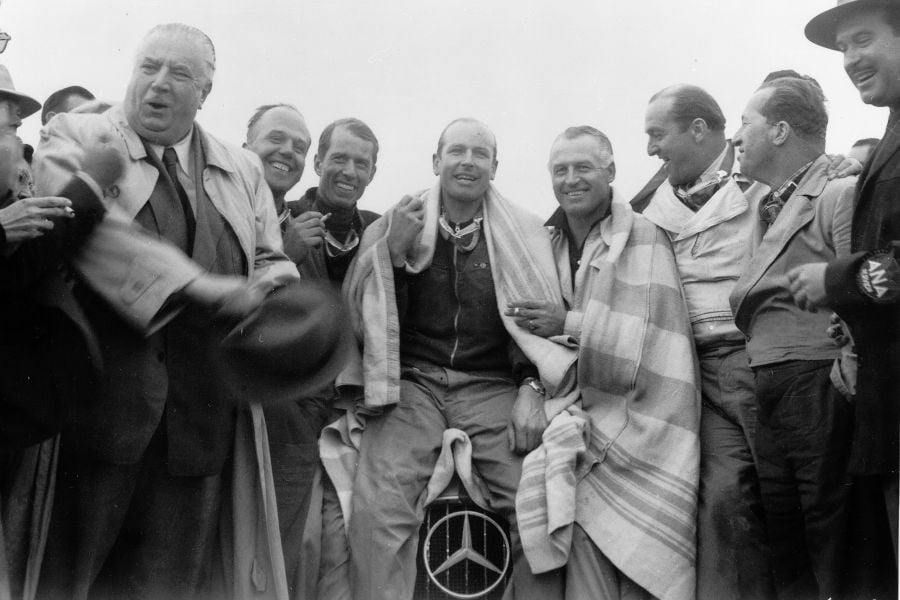 Victorious return to racing in 1952

From 1939 until 1945 Neubauer was responsible for organizing the company’s repair workshops. After the World War II, Mercedes-Benz resumed with racing in 1952, running with 300SL (W194) race car in the sports car events. The come-back results were fantastic. In June, Neubauer’s team scored a 1-2 victory at 24 Hours of Le Mans. The first ever Le Mans wins for Mercedes was scored by Hermann Lang and Fritz Riess in the #21 car, ahead of Theo Helfrich and Helmut Niedermayr in the #20 car.

One more great win that year was at Carrera Panamericana with Karl Kling and Hans Klenk in a Mercedes-Benz 300SL (W194). It was a famous race which they won despite having a crash with a vulture.

Preparing for a big entry to Formula 1 Championship

In 1953, Mercedes-Benz skipped Le Mans but team’s drivers Karl Kling and Fritz Riess served as Alfa Romeo entrants in the #23 Alfa Romeo  6C/3000, also having Alfred Neubauer with then in the pits. They retired with transmission problems after twelve hours.

After a domination of Italian manufacturers in the first years of the Formula One World Championship, with Alfa Romeo and Ferrari drivers taking four titles between 1950 and 1953, Mercedes-Benz was ready to enter the championship in 1954. 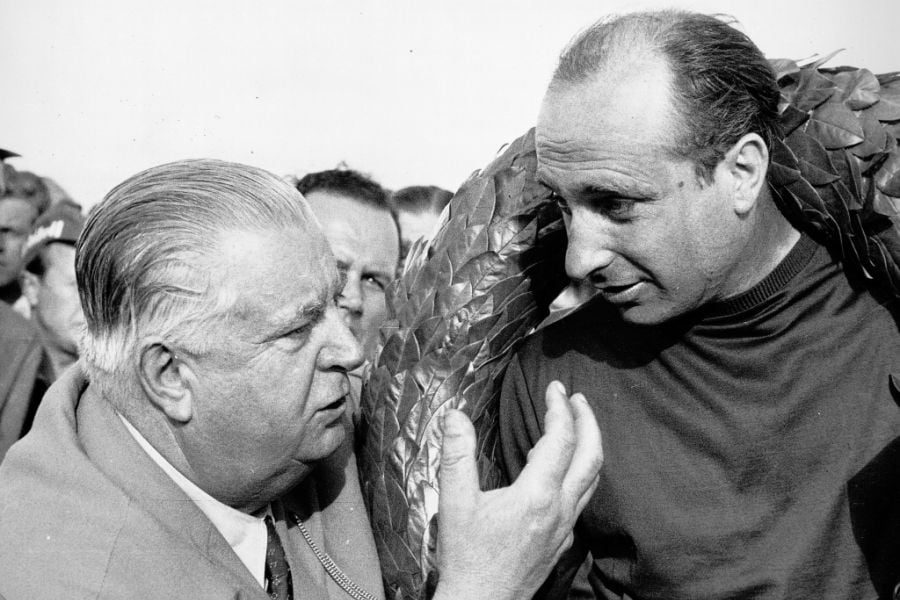 Mercedes-Benz entered the 1954 Formula One Championship with streamlined Mercedes-Benz W196, equipped with a 2.5-litre turbocharged engine. The first race was the French Grand Prix at Reims in June. Juan Manuel Fangio moved from Maserati to Mercedes and won the first race with the new team, ahead of teammate Karl Kling. The third driver was Hans Herrmann, who set the fastest lap but retired with a broken engine.

After that, Neubauer led Fangio to three more wins (Germany, Switzerland, Italy) and his second championship title. The victorious streak continued in 1955, with four wins for Fangio and one victory for his new teammate Stirling Moss. Fangio dominantly won his third championship title.

That year, Mercedes recorded one of the most known wins in sports car racing history, with Stirling Moss and his navigator Denis Jenkinson winning at Mille Miglia in a Mercedes-Benz 300SLR (W196S). 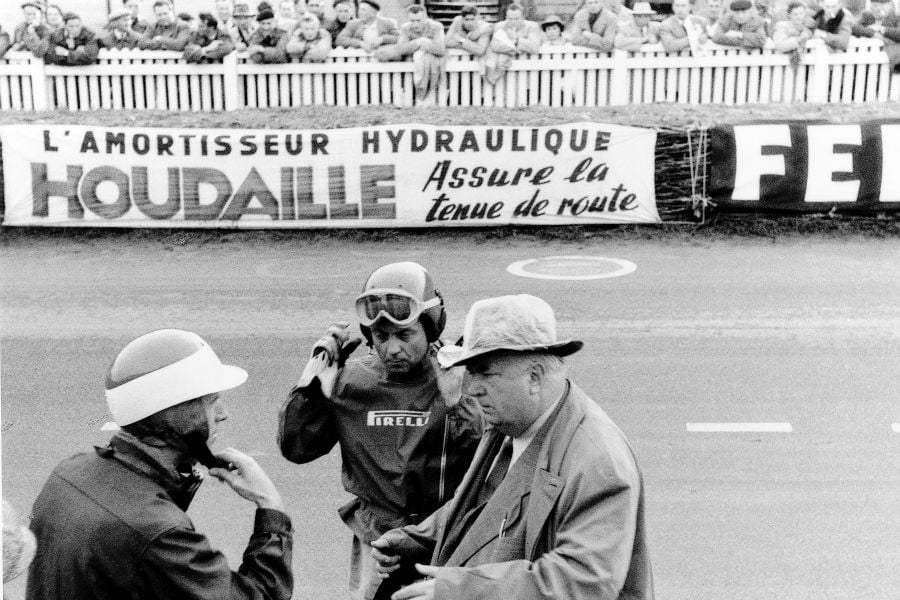 Withdrawal and retirement from racing after Le Mans tragedy

Unfortunately, a dominance of Silver Arrows was marred by a tragedy at 1955 Le Mans 24 Hours in which Mercedes driver Pierre Levegh lost a life in a catastrophy which took lives of more than 80 spectators. Although the race had been continued, Neubauer withdrew the remaining cars from the event soon after the catastrophic wreck.

The team stayed in the F1 Championship until the end of the season but then withdrew from racing completely. The end of the team was also the end of Alfred Neubauer’s career and he retired. He died on August 22, 1980. 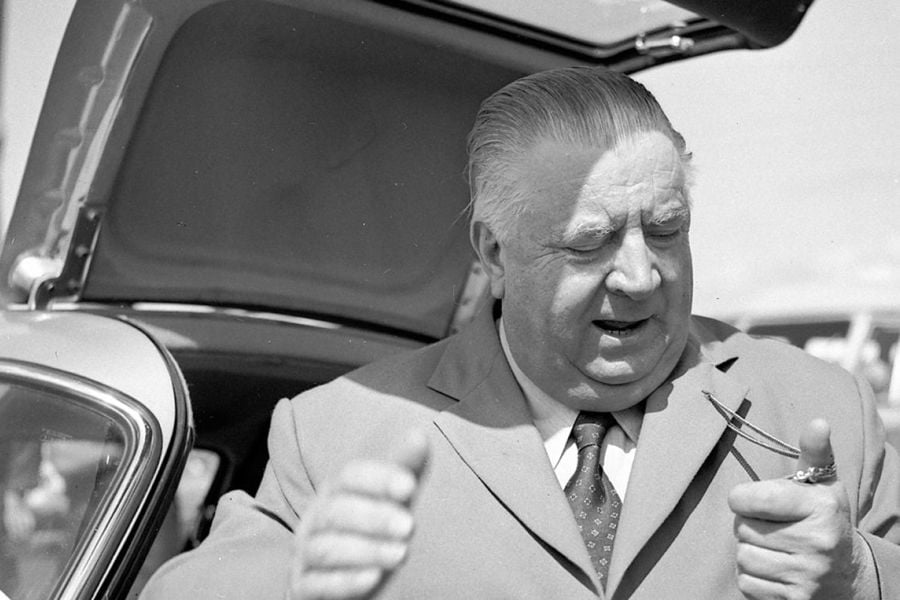