Kyle Busch is an American racing driver and a team owner who recorded more than 1000 race starts and more than 200 victories in three NASCAR national series since 2001 when he debuted in the NASCAR Truck Series. He's the only driver in NASCAR's history with more than 200 wins. 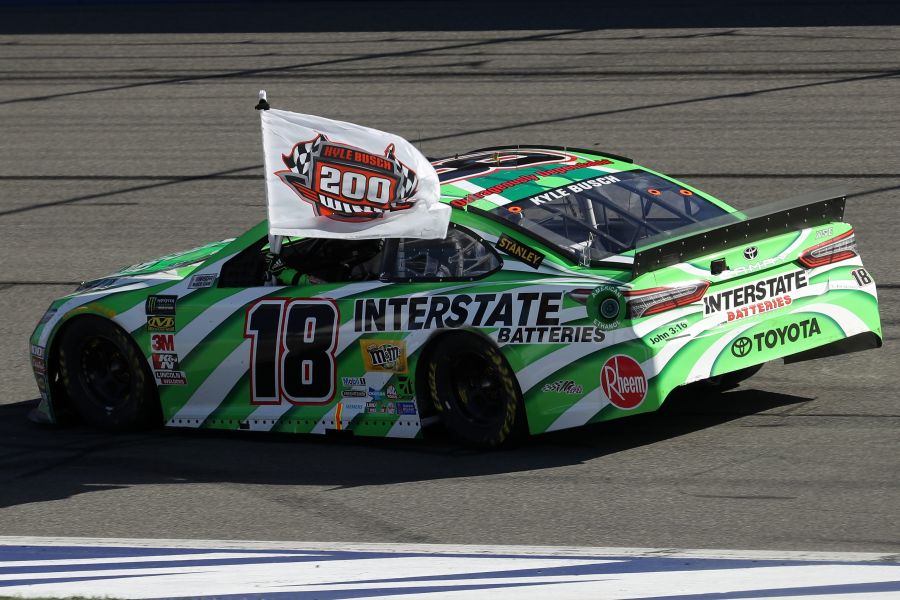 NASCAR debut at the age of 16

Kyle Thomas Busch was born on May 2, 1985, in Las Vegas. Busch began his driving career in 1998, competing with legends cars. He won two track championships at the Las Vegas Motor Speedway Bullring short-track, before moving to late models and winning the 2001 title with 10 victories in 15 races.

At the age of 16, Busch debuted in the 2001 NASCAR Craftsman Truck Series, driving the #99 Ford F-150 for Roush Racing at Indianapolis Raceway Park. He finished 9th in his first NASCAR race. Busch was the fastest in practice for a Truck Series race at California Speedway, but he was not allowed to race because Marlboro was a sponsor of some races at the track the same weekend, and the law forbade to people under 18 years to participate in events sponsored by tobacco companies. Busch competed in a total of six races in his debuting NASCAR season.

Kyle had to wait until 18th birthday

For the 2002 season, NASCAR defined a minimum age of 18 years for starters in their races, which is why the 17-year-old Busch switched to the American Speed Association National Tour, still driving Ford for Roush Fenway. He competed in 20 races and finished 8th in the standings.

In 2002, Busch graduated from Durango High School in Las Vegas and after that, he completely focused on his racing career. Busch entered the 2003 season as a development driver for Hendrick Motorsports and he ran seven races with Chevrolet Monte Carlo in the ARCA RE/MAX Series, winning two times at Nashville and Kentucky.

In May 2003, after he turned 18, Busch resumed his NASCAR career, joining the Nemco Motorsports in seven races. He was driving the #87 Chevrolet and finished second in his debut at Lowe's Motor Speedway and once again at Darlington Raceway.

The 2004 season began with a victory in the ARCA Re/MAX Series, at the 200-mile race at Daytona International Speedway. It was his last ARCA race, he graduated as the full-time driver of Hendrick Motorsports' #5 Chevrolet in the Busch Series. Busch scored his first NASCAR career pole in the fifth race of the year at Darlington Raceway and his first ever NASCAR win at Richmond International Raceway. He added four more victories and finished 2nd in the final classification behind Martin Truex Jr.

During 2004, Busch also made his debut in the Nextel Cup Series driving the # 84 Chevrolet for Hendrick Motorsports. He debuted at his home track at Las Vegas Motor Speedway. He qualified for six races, finishing best in 24th place at California Speedway.

In 2005, Busch stepped in the #5 Chevrolet of Hendrick Motorsports to compete for the full season in the NASCAR Nextel Cup Series. Kyle won his first career Nextel/Sprint Cup race at California Speedway in September. He was the youngest winner in the history of the series, at an age of 20 years, 4 months and 2 days. He won the penultimate race of the season at Phoenix International Raceway to finish 20th in his debuting season and to win the Rookie of the Year title.

Kyle also competed in selected races in other NASCAR series in 2005, winning one race in the Busch Series and three races in the Craftsman Truck Series for Billy Ballew Motorsports. He became the youngest winner in the Truck series history.

Kyle Busch, among the drivers who qualified for the Chase in 2006

First winner with the Car of Tomorrow

In 2006, Kyle Busch competed full seasons both in the Nextel Cup Series and Busch Series. He won one Nextel Cup race at New Hampshire and qualified for the Chase, to finish 10th at the end of the season. In the NASCAR Busch Series, he won at Bristol and finished seventh in points. In the Craftsman Truck Series, Kyle again competed in selected events, winning two times.

In 2007, which was his last season with Hendrick Motorsports, Kyle Busch won just once, but his previous results brought him the 5th place in the final classification. He won with the new Chevrolet Impala at Bristol Motor Speedway in March, as the first winner with a new generation of cars named the Car of Tomorrow.

Partnership with Joe Gibbs Racing since 2008

In June 2007, it was announced that Kyle Busch would be leaving Hendrick Motorsports at the end of the season. Dale Earnhardt Jr. replaced Busch, who signed for Joe Gibbs Racing.

Kyle Busch had a good debut in the JGR #18 Toyota by leading the most laps in the season-opening Daytona 500, but he finished fourth. He took first Sprint Cup victory for Joe Gibbs Racing at Atlanta Motor Speedway. He won seven more times to set the career record of eight wins in one season. He entered the Chase leading in the points, but after a few bad races, he dropped to 10th place at the end.

In the 2008 Nationwide Series, Kyle Busch won 10 of thirty races, helping Joe Gibbs Racing to win the Nationwide series owners' championship. Busch himself finished 6th in the points. His ten wins tied the Nationwide series record for most wins in a season. He added two wins in the Truck Series, driving #51 Toyota for Billy Ballew Motorsports.

Kyle Busch started his 2009 season with a win at Daytona in Gatorade Duel qualifying race for the Daytona 500. At Daytona 500, he led the most laps, but retired after an accident. The next week at Auto Club Speedway, Busch became the first driver in NASCAR history to win two national series races in the same day, winning the Truck Series and Nationwide Series.

In the 2009 Sprint Cup Series, Busch won four races and finished 13th in the points after he missed to qualify for the Chase. His first season's victory at Richmond was scored at his birthday.

He had a successful season in the 2009 NASCAR Nationwide Series, winning his first NASCAR title. The #18 Toyota was victorious in nine races, with a total of 25 top 5 results in 35 races.

Kyle also won seven races in the Camping World Truck Series, in the last season with Billy Ballew Motorsports. For the 2010 season, he founded Kyle Busch Motorsports and entered the Truck Series with his own Toyota. Except Busch, the #18 Toyota Tundra was driven by Johnny Benson Jr and Kasey Kahne.

In August 2010, Busch became the first driver in NASCAR history to win all three NASCAR national series races in a single weekend. He achieved that at Bristol Motor Speedway, winning the Camping World Truck Series races with his #18 Toyota and other two races with JGR #18 Toyotas.

Record-breaking 13 wins in the Nationwide Series

He finished 8th in the final classification of the Sprint Cup Series after three wins. In the Nationwide Series, Busch won 13 races in 2010, breaking the all-time record for most wins in a season he previously shared with Sam Ard. In the Truck Series, Busch won eight races and his # 18 team won the 2010 owners' championship in the series.

The 2011 season started with a wreck in the Budweiser Shootout at Daytona International Speedway. At Daytona 500, Busch finished eighth. Later in the season, he scores four wins and finished 8th in the final standings.

In the 2011 Nationwide Series Busch scored eight victories and surpassed Mark Martin for the most Nationwide series wins ever. With his own Toyota, Kyle won six Truck Series races in 2011.

Kyle and Kurt together in Kyle's team

The 2012 Sprint Cup Series season began with a win in the Budweiser Shootout at Daytona, but after that Kyle Busch won only one race at Richmond and finished 13th in the points at the end of the season, failing to enter the Chase.

The season of 2013 was better and Kyle won four Sprint Cup races. With twelve more top 5 finishes, he was fourth in the final standings. It was his career-best result at the time.

In the 2013 Nationwide Series, Busch merged his #54 team with Joe Gibbs Racing as part of a multi-year contract extension with the team. His second car, the #77 Toyota, was driven by Parker Kligerman. Busch almost tied his record of wins in the Nationwide Series but achieved 12 wins in the season. He added five Truck Series victories with the #51 Tundra.

The 2014 Sprint Cup results were poor, with just one victory during the season at Auto Club Speedway. Despite that, he entered the Chase and finished 10th in the points at the end of the season.

In the Nationwide Series, he scored seven wins in the #54 JGR Toyota, which he shared with Sam Hornish Jr. In the Truck Series, Kyle has won seven of ten races he competed. The team won the owner's championship.

The most successful year started with a nasty crash

And then the championship winning year came. It started catastrophically, with a serious accident during the Xfinity Series race at Daytona International Speedway, on February 21st. Busch crashed into a concrete wall with no SAFER barrier.

With multiple fractures, he paused from racing until May. He returned to the track at the NASCAR Sprint All-Star race at Charlotte on May 16th.

In order to make the Chase in 2015, Busch needed to be in the Top 30 in points and have one win in the Sprint Cup Series. He succeeded by winning four races, including three races in a row in July.

Step by step, he entered the final phase of the Chase and with the victory at the final event of the season, at Miami-Homestead, he won his first Sprint Cup title. Two days earlier, Erik Jones won the Truck Series title in the Kyle Busch Motorsports' Toyota, making Busch the owners champion.

Kyle Busch drives Toyota in the Cup Series since 2008

Regularly among the front-runners

In 2016, Kyle Busch remains with Joe Gibbs Racing and continued to race in the Cup Series and Xfinity Series with the #18 Toyota. He also put back the number 18 on his Truck Series Toyota in a victorious race at Martinsville. In the Cup Series, he was a race winner four times to finish third in the final standings.

In 2017, he was again among the front-runners. He waited twenty races for his first win but then he collected five wins until the end of the season, entering the season's finale as one of four title contenders. In the final race, he was beaten by Martin Truex Jr. 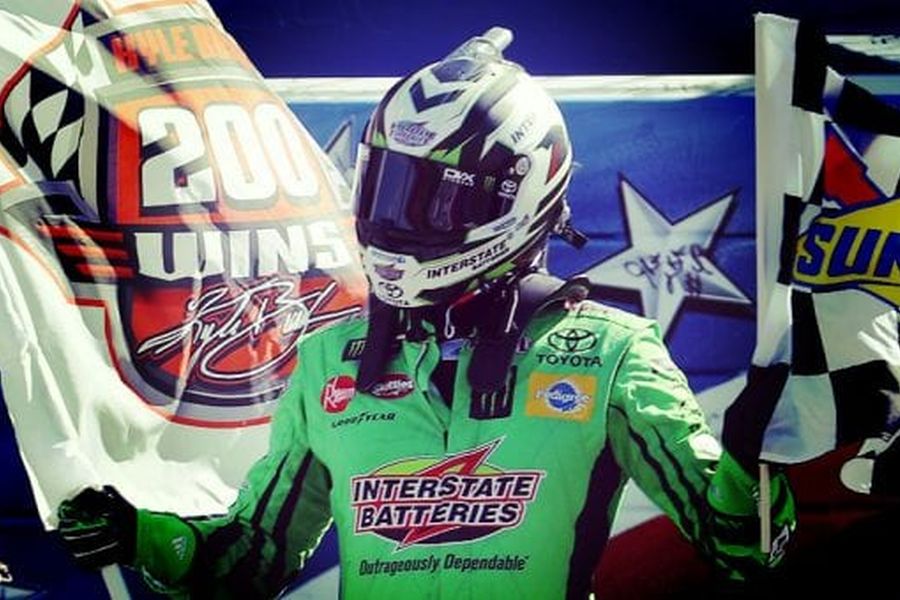 In 2018, Kyle Busch was again among the front runners in the Cup Series, scoring eight wins and finishing fourth in the championship. He continued to race occasinally in other two national series, adding one Xfinity Series win and two Truck Series wins to his account.

In 2019, he started a season with 200th NASCAR victory on his mind, the number that only Richard Petty has. Busch continued to race in all three national divisions and reached that number in March at Auto Club Speedway where he won Cup Series race in the #18 Toyota Camry.

Later during the regular Cup Series season, Busch scored two more wins (Bristol and Pocono), then entering the Playoffs and winning the most important race, the season's finale at Homestead-Miami Speedway.

In 2019, Busch also won four times in the Xfinity Series and five times in the Truck Series, ending the season with 208 NASCAR victories on his account.

In addition to his aggressive nature and often problematic behavior, Busch is a strong charitable person. He formed the Kyle Busch Foundation (KBF), committed to empowering children, families and communities to overcome hardship by providing essential tools (financial, material and experiential) to allow them to live their best lives possible. In addition to children’s homes his foundation supports, Busch and his wife, Samantha, also supporting other charity projects.