British GT at Oulton Park: Victories for Bentley and Lamborghini

In the GT4 class, HHC Motorsport took the victory in Race 1 with Callum Pointon and Dean MacDonald driving the #57 McLaren 570S GT4. The winners of the second race were Seb Priaulx and Scott Maxwell in the #15 Ford Mustang GT4 of Multimatic Motorsports.

The 2017 champions Seb Morris and Rick Parfitt Jr made the perfect start to their new partnership with JRM Racing by claiming victory in the first race of the day. Barwell Motorsport’s Phil Keen and Adam Balon finished second, while Bradley Ellis and Ollie Willkinson brought Optimum Motorsport’s #96 Aston Martin V8 Vantage GT3 to the third place.

RAM Racing’s Ian Loggie started the Race 1 from pole position in the #6 Mercedes-AMG GT3. He was in the lead for just a lap-and-half before Team Parker’s Ryan Ratcliffe hit the Mercedes and ruined the race for the pole-sitter. Rick Parfitt, who passed Sam de Haan’s Barwell Lamborghini at the start, inherited the lead and stayed in front until the end of his sting, handing the car to Seb Morris.

In the GT4 class, Team Parker Racing was close to the victory but Nick Jones spun out in the closing minutes and lost a lead, dropping to P4. Scott Maxwell inherited the lead in the #15 Ford Mustang which he was sharing with Seb Priaulx. Balfe Motorsport’s Graham Johnson and Michael O’Brien finished second in the #20 McLaren 570S GT4. Matt George and Steve McCulley completed the GT4 podium in the #44 Jaguar F-Type SVR GT4 of Invictus Games Racing. 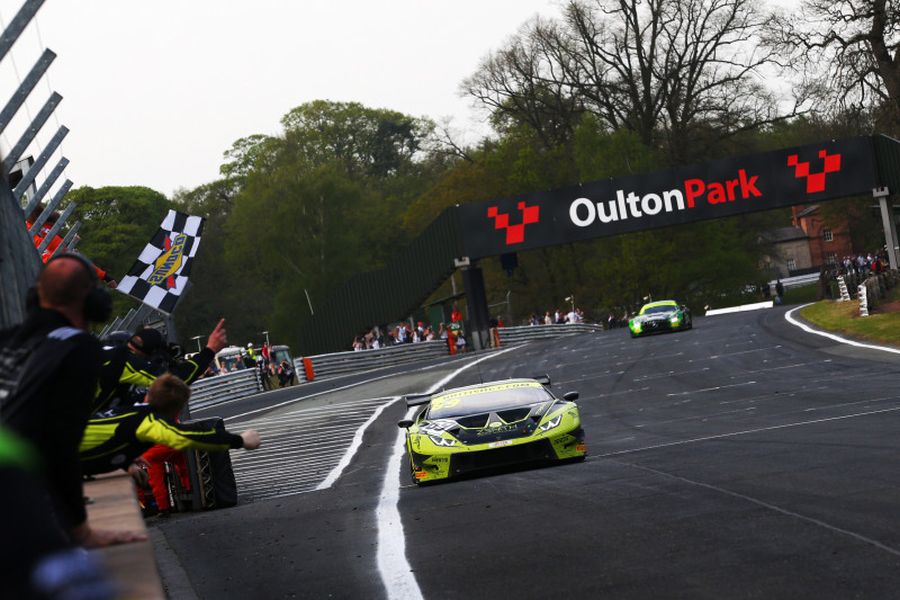 Barwell’s #69 Lamborghini at the finish line of Race 2