World War II was a black period in the world’s history, but also a time when all motorsports activities were stopped. In the post-war period, all manufacturers involved in races continued to develop their pre-war models or build some new cars. British racing company ERA wasn’t strong enough to face the European rivals, especially Italians and Germans, so the new project was launched with the intention to create a new racing car which would be able to compete against the rivals at the highest level.

British Racing Motors was founded in 1945

The new company, founded in 1945, was named British Racing Motors (or BRM). The founders were Raymond Mays and his long-time associate Peter Berthon, who worked together in the pre-war ERA project. They wanted to build an all-British grand prix car for the post-war era as a national prestige project, with financial and industrial backing from the British motor industry and its suppliers.

A factory was set up in Spalding Road, Bourne, Lincolnshire, behind Eastgate House, Mays’ family home, in a building called ‘The Maltings’. Several people involved with ERA returned to the firm to work for BRM, including Harry Mundy and Eric Richter. The team also had access to a test facility at Folkingham aerodrome. 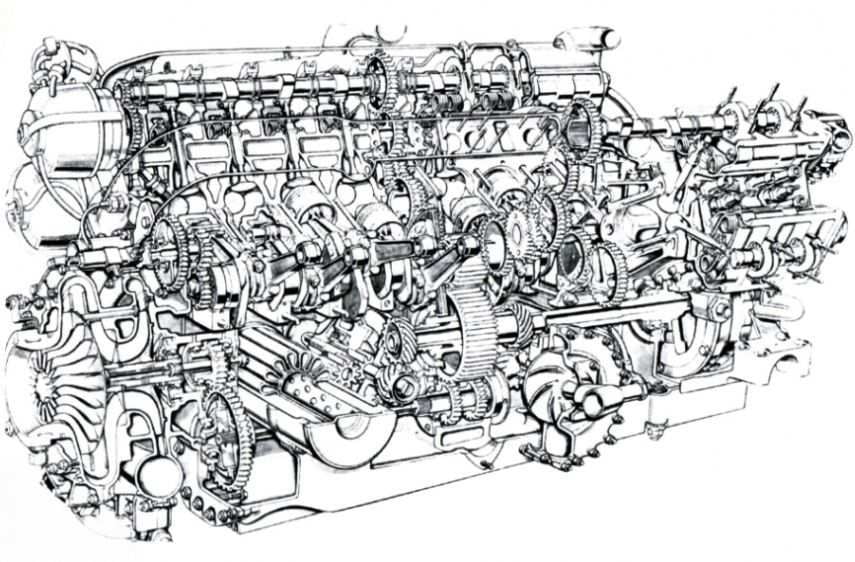 Components were manufactured by various British companies, including Rolls-Royce, English Steel, Standard Motors, David Brown, SU Carburettor etc. Eventually, there were around 350 companies that provided support to the project. The famous Rolls-Royce company designed and manufactured the two-stage centrifugal supercharger, rather than the more commonly used Roots type.

The design concept of the V16 had not been used extensively on automobiles before so there were many manufacturing problems and the engine did not fire for the first time until June 1949. It proved to be outstandingly powerful but its output was produced over a very limited range of engine speed.

Raymond Mays claimed in his book that the power curve went to a maximum of 600 bhp at 12,000 rpm. The power came on suddenly if the throttle was applied carelessly, resulting in wheelspin as the narrow tires proved unable to transfer the power to the road. This made the car very hard to drive. 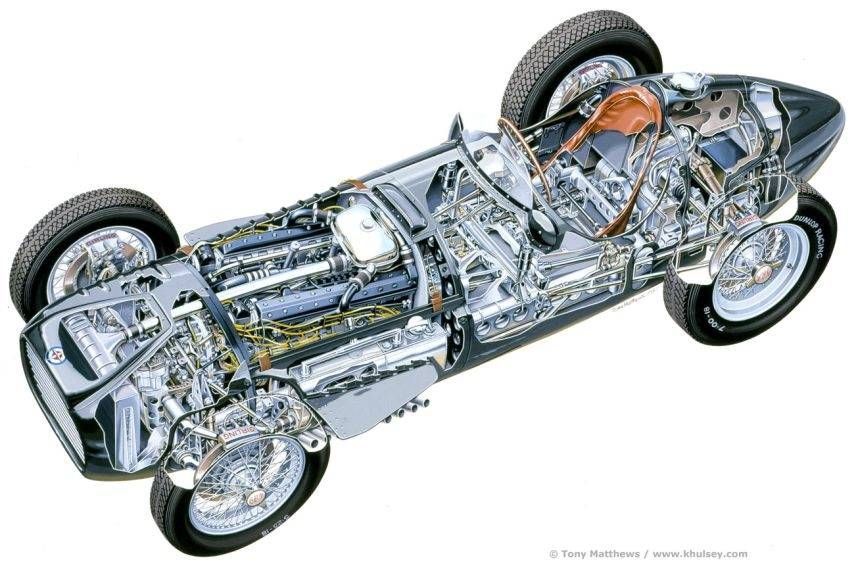 The car which was produced for V16 engine was named BRM Type 15 (or BRM P15). The chassis was designed by Rubery Owen, whilst the gearbox was designed by Harry Mundy, based on the one from the German pre-war 1.5 liter V8 Mercedes-Benz W165 car. The rear suspension of the new BRM also derived from Mercedes-Benz, and trailing arm front suspension from the Auto Unions. The special three-leading-shoe drum brakes were used, along with Lockheed air-struts incorporating silicon oil/air pocket adjustable springing/damping on all four wheels. The body panels and styling of the car were designed by Walter Belgrove of Standard Motors. The design of the car and all engineering drawings had been completed by the Spring of 1947.

In many cases, parts were produced in the form of donations to the BRM team. That reduced the overall costs, but on the other hand, caused many delays, so the car wasn’t completed until May 1949. The completed car/engine combination was first run on the aerodrome at RAF Folkingham in December 1949, driven by Raymond Mays. 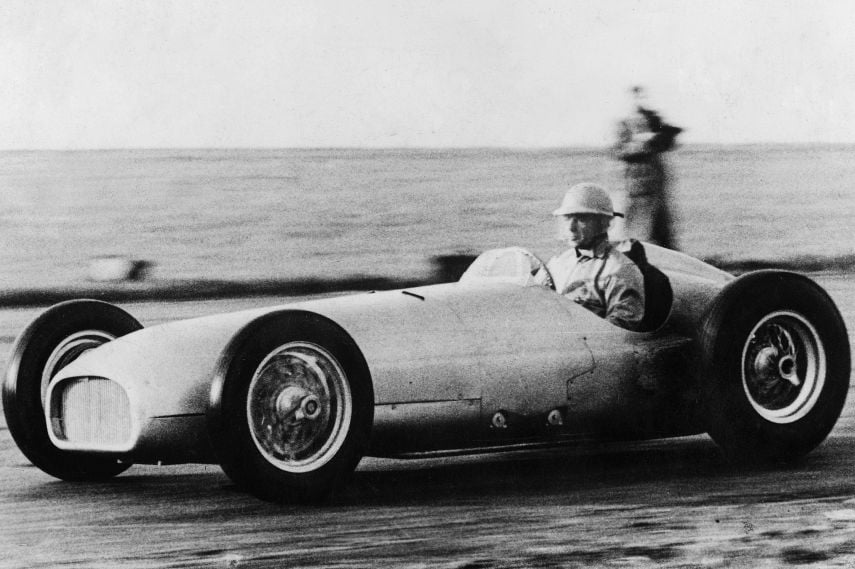 The only demonstration run in front of the future Queen

It had been intended to debut the car at the 1950 Formula One Grand Prix race at Silverstone, the first race of the new Formula One Championship, which was held on May 13th. The plan failed because of a few problems with the engine. BRM P15 V16 wasn’t ready for racing, but instead, the car was displayed in front of the audience and Mays drove several laps. The demonstration was witnessed by Princess Elizabeth, later Queen Elizabeth II, and her husband, Prince Philip, Duke of Edinburgh.

The car stalled at the starting line

The second attempt was another failure. The car entered the 1950 Daily Express non-Championship race at Silverstone in August. It missed the practice sessions but, after three proving laps driven by the Frenchman Raymond Sommer, it was allowed to start from the back of the grid. When the flag dropped at the start of the race, the BRM with number 8 stalled at the start line. The car was pushed over to the side of the track and had withdrawn. 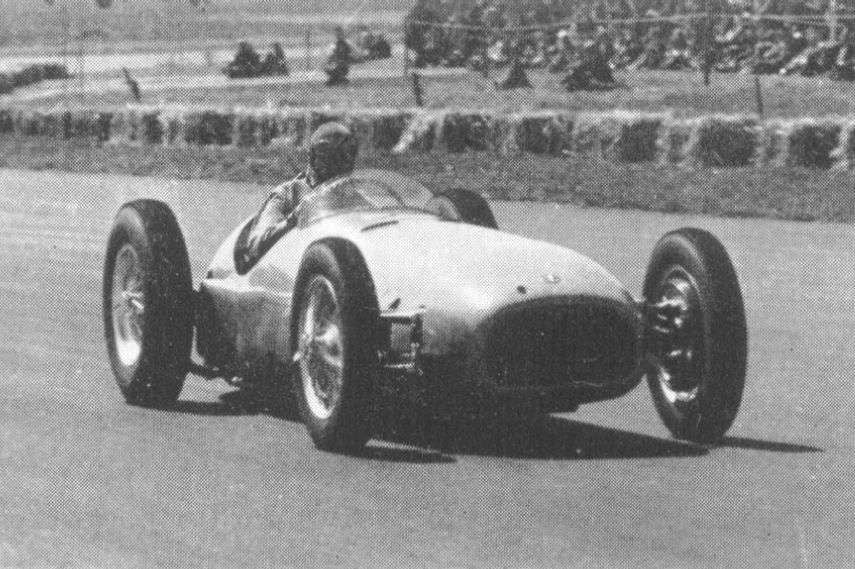 Raymond Mays during demonstration run at Silverstone in 1950

The third outing of the car was finally successful. Reg Parnell drove BRM P15 V16 at September’s sprint event at Goodwood and he won two races. Reg Parnell and Peter Walker started one more race in 1950, Gran Premio de Penya Rim at Pedralbes Circuit in Barcelona, Spain, but both retired during the race.

Season 1951 seemed to be better than the previous one, according to results at British Grand Prix at Silverstone. Two new cars were built with improvements to the brakes, steering, and fuel tanks. BRM team nearly missed the race, but they arrived at the last minute and had to start from the back of the grid, in the 19th and 20th positions. Reg Parnell and Peter Walker were in pursuit of the leaders, despite the fact that they were suffering from hand and feet burns because the exhaust pipes were routed inside the bodywork. Parnell and Walker finished fifth and seventh respectively. 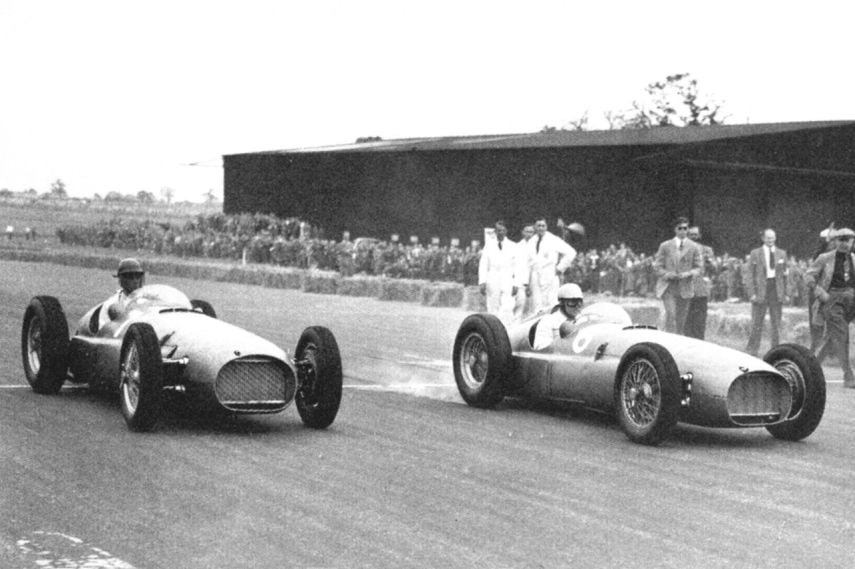 The brightest moment for BRM V16 was 1951 British Grand Prix

Unfortunately for BRM, the race at Silverstone was just a one-off good moment. At the next F1 race at Monza, BRM’s engineer and development driver Ken Richardson qualified 10th, while Parnell was 8th. Before the race, Richardson’s entry was cancelled because he had insufficient racing experience, so Hans Stuck had to replace him. However, gearbox trouble in one car led to Berthon anticipating a similar problem in the other, withdrawing both cars.

Disappointed, Mays’ team returned home, but one car was able to remain at Monza for further testing due to the generosity of the track’s owners, who allowed the team to run the car on the circuit and use the circuit’s facilities at no charge. There were no further races in 1951. 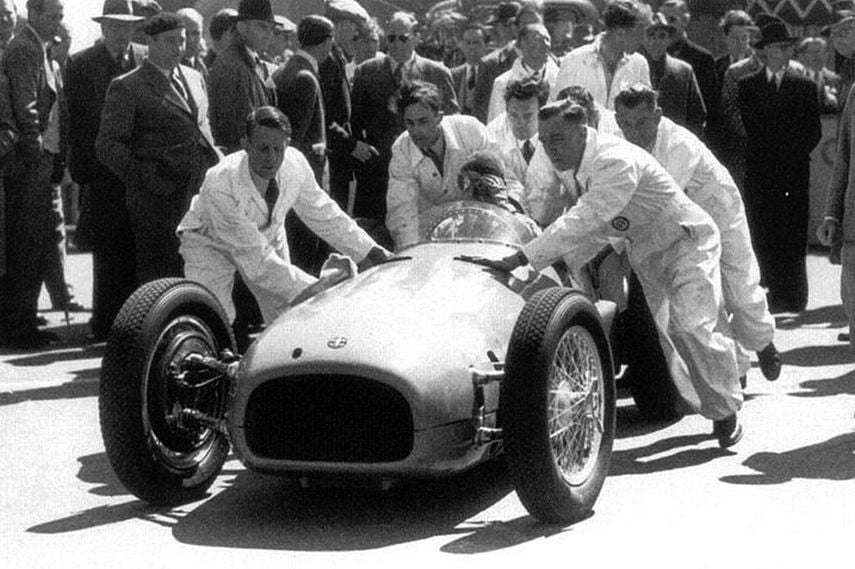 The lack of reliability ruined the image of BRM V16

Juan Manuel Fangio was a fan of BRM V16

At the start of 1952, Alfa Romeo announced the withdrawal of their Alfettas from the World Championship. BRM also skipped the Gran Premio de Valentino in Torino, Italy, in April. FIA was faced with the fact that only Ferrari entered the Formula One championship, so the rules were changed so that the Championship would be raced according to Formula Two regulations. FIA wanted to fill the grid, but BRM Type 15 wasn’t admissible.

With no car eligible for the championship, BRM had to focus on non-championship races, Formula Libre and minor British races. World champion Juan Manuel Fangio was a free agent after Alfa Romeo withdrew from the championship, so he agreed to drive for BRM.

At the non-championship Grand Prix race at Albi Circuit on June 1, Fangio and Jose Froilan Gonzalez took the two BRM’s to the front of the grid in qualifying, but retired in the race because of overheating problems. A week later at Ulster Trohpy at Dundrod circuit, Fangio and Stirling Moss drove BRMs, but both retired. Later that year, Gonzalez and Ken Wharton participated at Daily Mail Trophy at Boreham and they also retired. Because of all of those retirements, Moss said that the car was one of the worst he ever drove. On the other hand, Fangio loved to race with BRM V16. 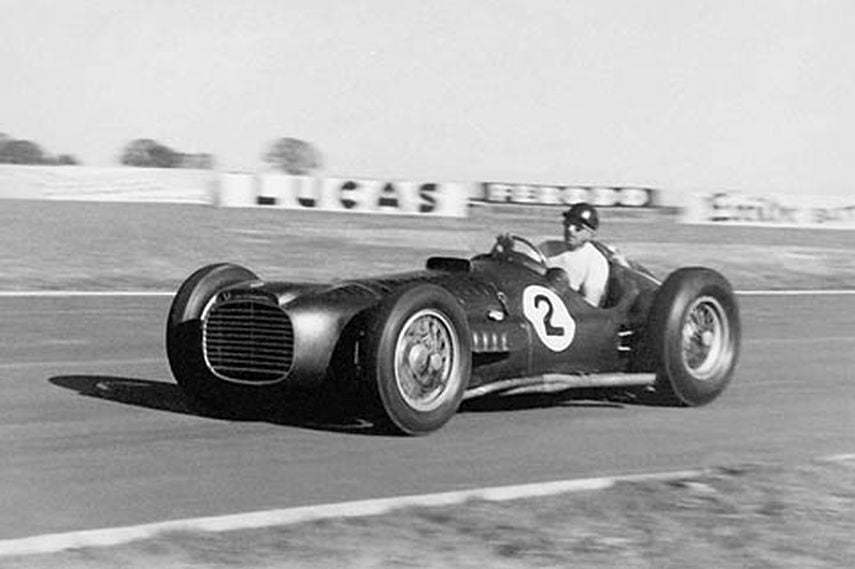 Bad image was too much for many of BRM’s backers and they decided to sell the team to Alfred Owen. With the new team in place in 1953, the Type 15 finally started to produce some consistent results. It was still in non-championship races, because regulations for the 1953 Formula One World Championship remained the same as in 1952.

At the Easter Goodwood races, Wharton was second in the first race ahead of Parnell in fourth, with Wharton winning the second race. He also finished third at Charterhall. At Albi Grand Prix, the BRM P15 V16 managed first, second, and fifth in the qualifying heat, with Fangio, Wharton, and Gonzalez as drivers. Jose Froilan González finished second in the finals as the other two cars dropped out.

At Silverstone, Fangio came second, with Wharton third. Wharton had then won three races in succession at Snetterton and Charterhall, and after three podium places in two races for the team at Goodwood, Wharton won the last race of the year at Castle Combe. 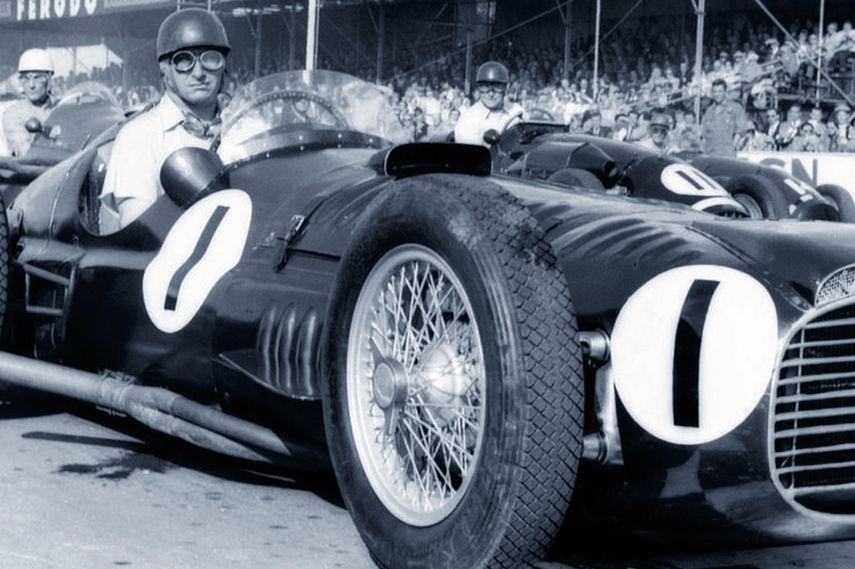 For 1954, an updated version of the Type 15 was produced. The car weighed about 90 kg less than the original car and featured a shorter wheelbase and a much smaller fuel tank. Wharton raced the old car in two races in New Zealand but could do no better than two third places because of car problems.

The two new cars named P30 or P15 Mk.2 appeared in thirteen races at ten different meetings in 1954, driven by Wharton and Ron Flockhart. Between them, they had won five of the first six races, but various spins and problems prevented them from more winning. During 1955, the team was preparing a new P25 car with 2.5-litre straigt-4 engine to get back into Formula One, so it was the last season for V16 engine. Peter Collins took a few wins, Ron Flockhart picked up a few podiums and that was the end of the story.

In the following years, BRM produced many successful cars and engines, even won constructors’ title and drivers’ title with Graham Hill in 1962, so the V16 was stored in an archive as a project to forget. 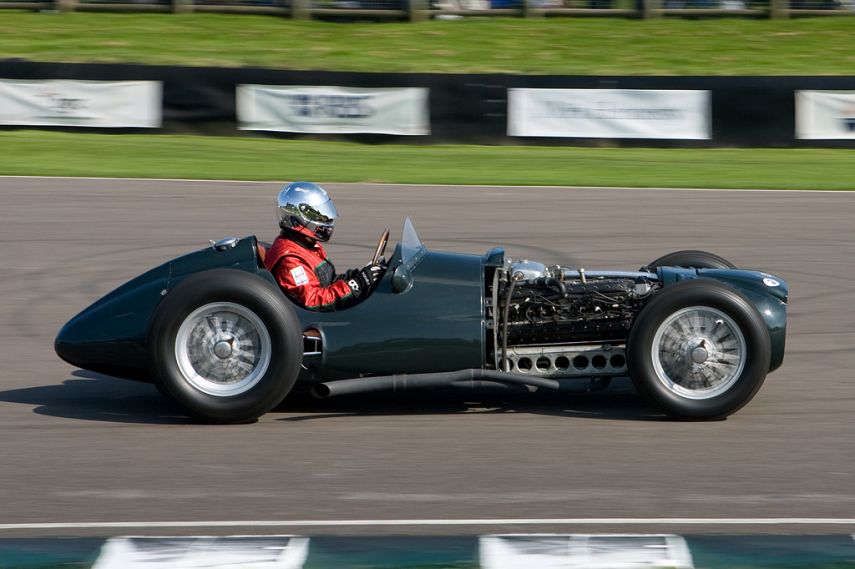 Only four cars were produced

A total of four V16-engined Type 15s were produced. One was written off after a collision during the 1953 Glover Trophy and salvaged for spares. Another car that crashed at Albi on May 1953 was used as the basis for one of the two P30s produced.

One Type 15 is on display at the National Motor Museum in Beaulieu, the other is on display as part of the Donington Grand Prix Exhibition in its original light green paint scheme alongside a P30 and a cutaway V16 engine. The fourth surviving car, another P30, is in the ownership of Bernie Ecclestone, having previously been owned by Pink Floyd drummer Nick Mason. The cars can sometimes be seen in action at various historic racing events such as the Goodwood Festival of Speed.

Is that the most beautiful sound ever? Just listen

After all not-so-good things about BRM V16, there is something that makes this car beloved among motorsports fans. That’s its sound. Many people said it’s the most beautiful sound of a racing car. Well, we agree that V16 sounds impressive, it’s music for the ears of every racing car lover, so let’s watch the videos and listen…