Lotus 49 - a Formula One Car That Changed the Game Forever

A change of regulations for the 1966 Formula One season had a great effect on Colin Chapman and Lotus who were forced to use the 2-liter engine while other teams and manufacturers switched to the new 3-liter engine. Without an engine of its own, Lotus switched to BRM. However, the H16 V8 engine was only good on paper, but disastrous in reality with lots of reliability issues, so Jim Clark drove his 3l-powered BRM-Lotus to just one victory at Watkins Glen. That forced Chapman to explore other solutions for 1967. In the end, he turned to Cosworth. Ex-Lotus engineers Keith Duckworth, Mike Costin, and Bill Brown already had experience in preparing and modifying factory Ford engines into race-winning power plants, so the choice was obvious.

The cost for the development, production, and maintaining of five engines was high, so the team turned to the recently established European wing of Ford, asking for development funding. Ford’s director of public affairs was, of course, well acquainted with both Duckworth’s and Chapman’s racing prowess, so he managed to convince the chairmen in Detroit to allow them the necessary budget. 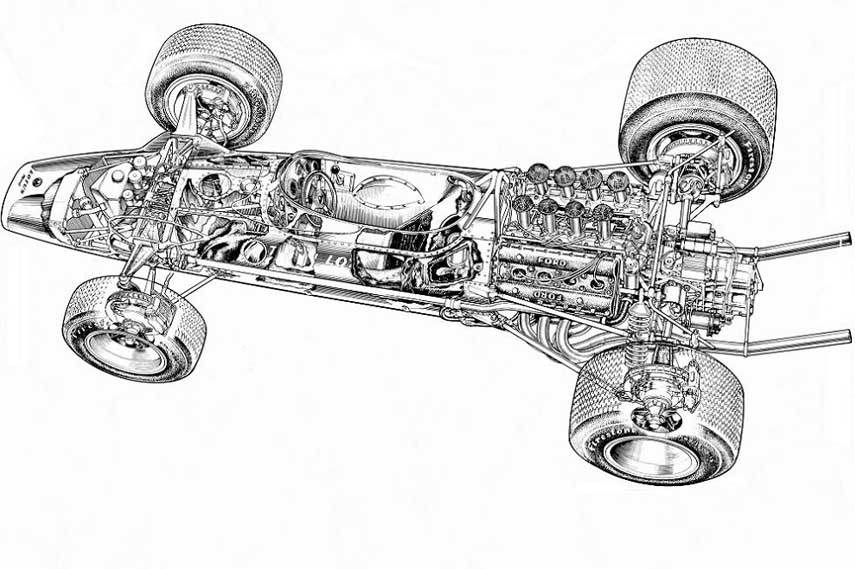 Lotus 49 had an advanced technical layout

To provide the much-needed space and weight reduction, it was decided that the motor should be a V8, mounted to a monocoque chassis, just like in the 49’s predecessor, Lotus 43. The sleek and simple design was carried out by Maurice Philippe, an ex-Lotus racer who became a Lotus designer. One major construction feature of the new Lotus was making the engine its bearing structural member, bolted to the monocoque, suspension, and the gearbox. The Cosworth powerplant itself was a 2.993ccm 90 degrees V8 beast with four valves per cylinder producing little more than 400HP at 9000RPM, with 370 Nm of torque at 7000RPM. 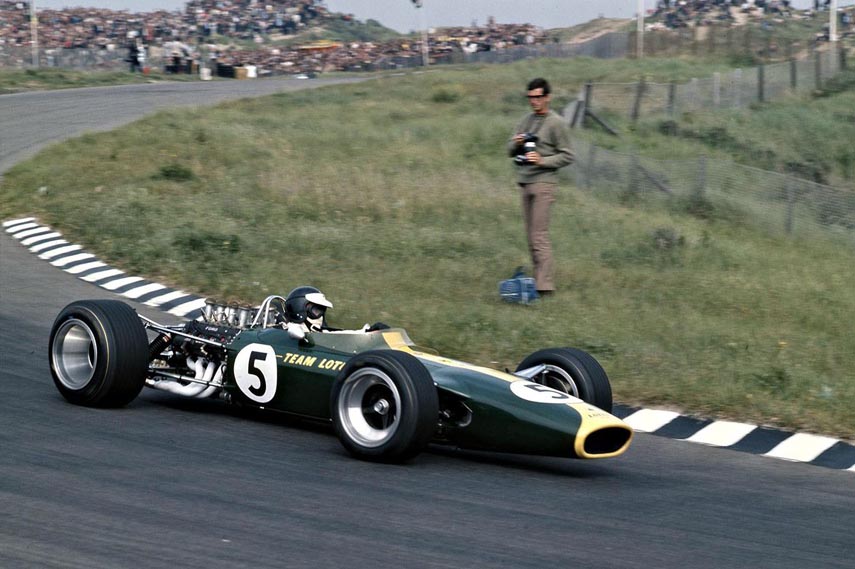 Jim Clark drove the Lotus 49 to its first victory

A successful debut of a revolutionary racing car

The preseason tests were carried out by Graham Hill who returned to Lotus after seven years and one championship title with BRM. After four retirements of the Lotus 43 in the first two races of the season, the green-and-yellow Lotus 49 had its debut at the 1967 Dutch Grand Prix where Jim Clark scored the win, while Hill was forced to retire. At Zandvoort, both cars suffered teething problems: Jim’s car had issues during the qualifying, whereas Hill started from pole, but his retirement was the result of a broken camshaft. 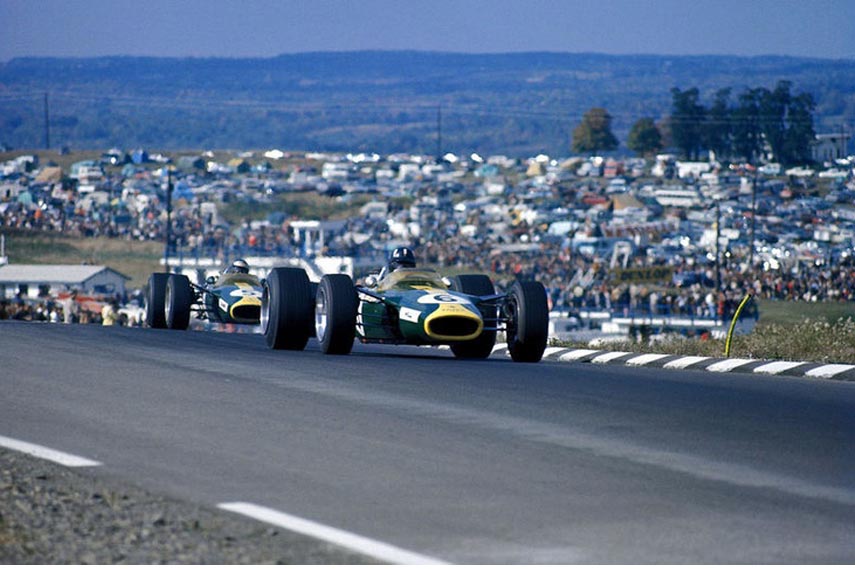 However, its debut wasn’t the most significant event of the season. United States Grand Prix at Watkins Glen was the real proving ground for Lotus 49 because Ford’s chairmen attended the event. They saw their big investment winning in the hands of Jim Clark, followed by Graham Hill who finished second according to team orders. By completing the 1-2 podium, Lotus 49, Clark, and Hill made Ford chairmen proud and assured that they’ve done the right thing by backing up Chapman and the boys from Cosworth.

At the end of the season, Clark finished third overall with four wins and one third place, whereas Hill wasn’t that lucky with just the second place in the US, one fourth, and seven retirements. Lotus 49 started from pole on all nine events it entered that year, but many retirements pulled Lotus down to the second place in team standings, behind Brabham-Repco. Three more racers appeared driving the 49 in 1967: Eppie Wietzes in Canada, Giancarlo Baghetti at Monza, and Moises Solana in the USA and Mexico.

Video : Lotus 49, first time out and a win at Zandvoort

At the start of the 1968 season, Lotus lost its most valuable man

The following season was marked by one disastrous event and a couple of game-changing ones. After winning the 1-2 in South Africa, Lotus started great, but celebrations didn’t last long because on April 7th, 1968, Jim Clark died after a crash in an insignificant F2 race he drove at Hockenheimring mostly because of a contract with Firestone tires. 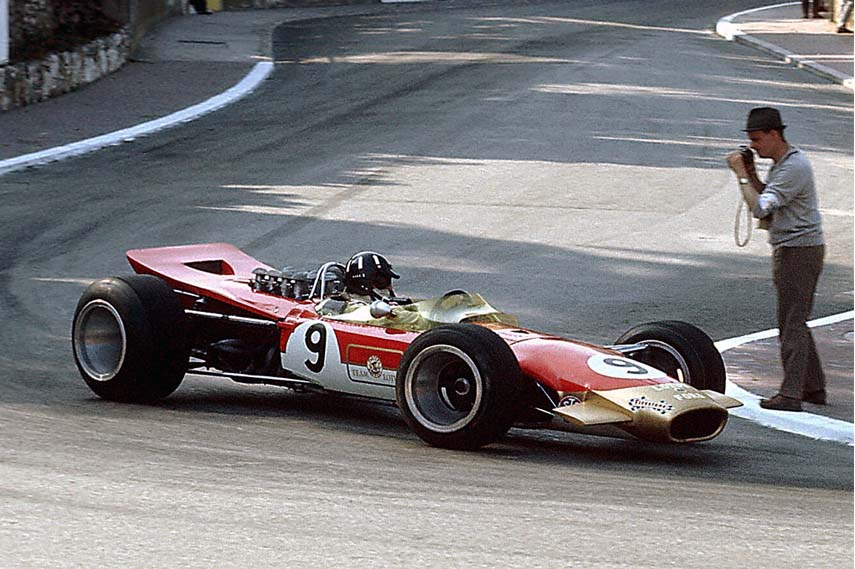 The other revolutionary approach from Chapman was of technical nature – Lotus 49B was the subject of first aerodynamic experiments. What started out as a sleek aluminum tube on four wheels, soon got wings on the front end and a huge rear spoiler bolted to the suspension which was deemed unsafe after several near-fatal accidents and it got banned. In 1968, Graham Hill got his second championship title and led the grieving team to an overall victory in the team category. In the process, he was aided by the young Jackie Oliver. Also, the American Mario Andretti made his Formula One debut in the cockpit of one Lotus 49 at Watkins Glen and Jo Siffert was the fastest of the bunch at Brands Hatch, in the last privateer victory in Formula One history. 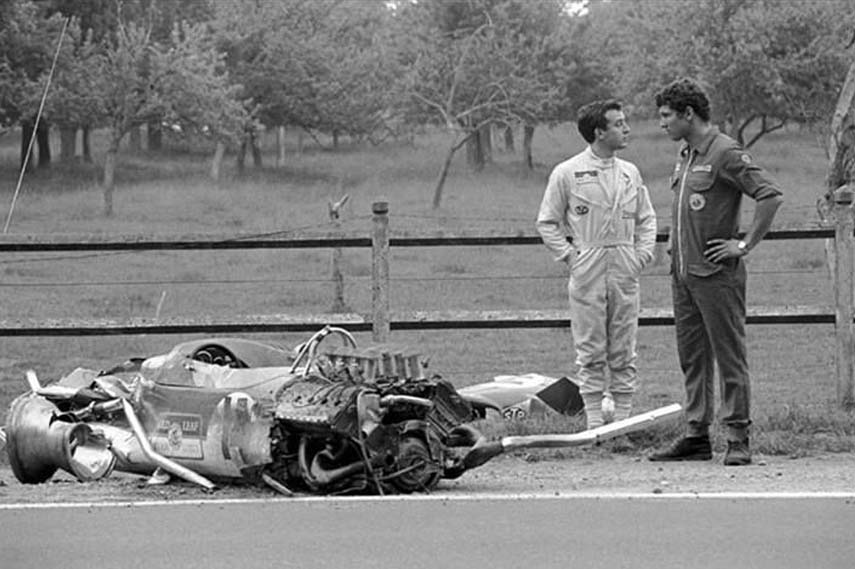 Jackie Oliver (left) casually standing next to his wrecked Lotus 49

In 1969, Graham Hill was joined by the hugely talented Austrian Jochen Rindt and they drove the 49 to two wins, two second places and one third. The season was marked by several fierce crashes caused by tall aerodynamic wings breaking at high speeds. Both of them miraculously survived the 1969 Spanish Grand Prix crashes at Montjuic, walking out of wrecked cars with just minor injuries. After the race, Rindt was particularly furious, blaming Chapman’s lack of judgement for the crash that could have killed him, but luckily left him with just a trademark broken nose.

At the 1969 USA Grand Prix, Jochen Rindt won his first Formula One race, but Graham Hill broke both legs, which forced him to take a break from racing. In constructor championship, Lotus finished the season in third, partly thanks to good results achieved by Jo Siffert. Jackie Stewart earned the championship title, while the Lotus boys Rindt and Hill were fourth and seventh respectively. 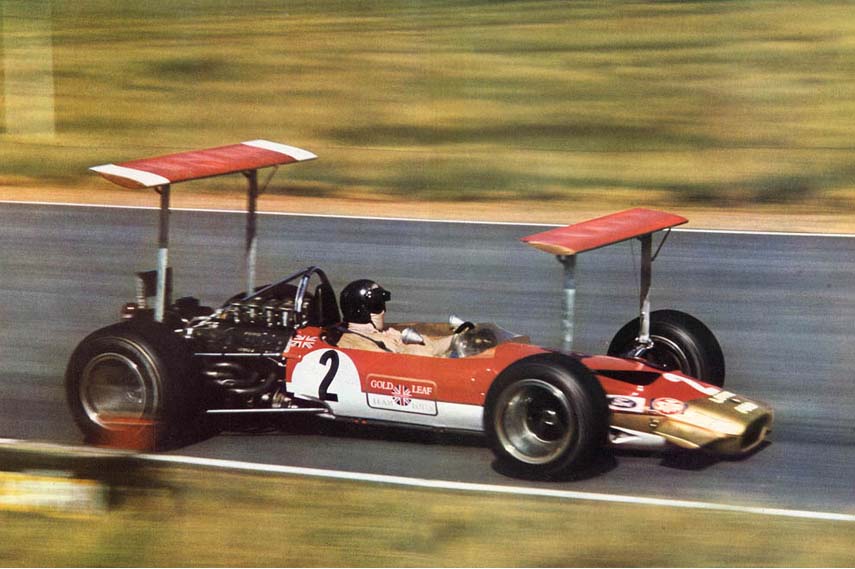 Year 1970 was the last one for Lotus 49, but that wasn’t exactly Chapman’s plan. The 49 was scheduled to be replaced by mid 1969, but as the replacement car was a complete failure, the three-year-old vehicle was improved for the start of the 1970 season, until it was replaced by Lotus 72. Jochen Rindt scored the last win for the 49 at the 1970 Monaco GP, and besides him, the car was driven by John Miles, Emerson Fittipaldi, Alex-Soler Roig, Graham Hill who switched to Rob Walker Racing, and several other privateers like Pete Lovely, the first ever winner at Laguna Seca. The brilliant DVF engine was not discounted, and it had undergone various upgrades, powering many more championship winning cars in Formula One, 24 Hours of Le Mans, Indy 500, USAC, CART, and Formula 3000, up until 1992. 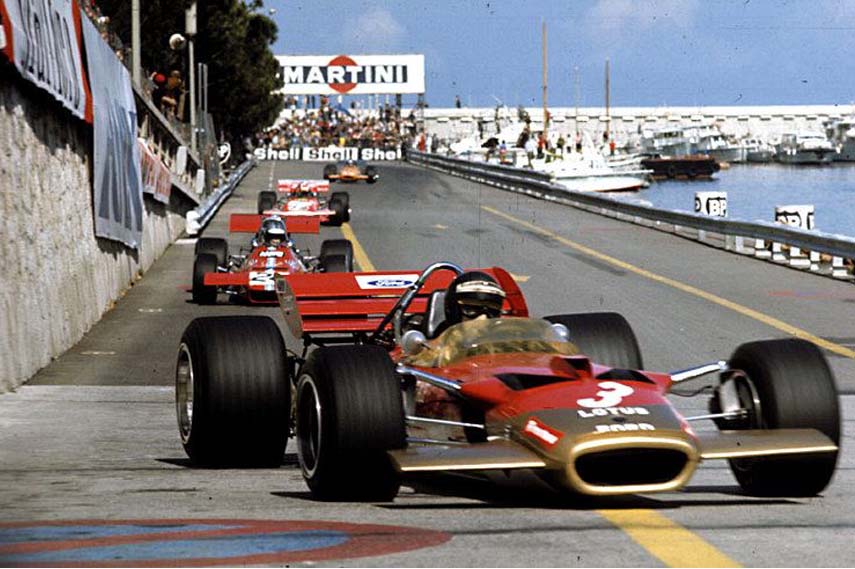 Due to its fragility and unreliability at high speeds, Jochen Rindt stated that “in the Lotus, he can be either dead or a world champion.” In an ironic twist of fate, he became both, albeit in the Lotus 72. After his fatal crash at Monza in 1970, Rindt was awarded the posthumous championship title that was handed over to his wife Nina. Out of twelve produced, seven Lotus 49s survived, and 49 had its last crash at Monaco Historic GP in 2014, when Chris MacAllister lost control of Jim Clark’s 1967 championship winning car and hit the barrier. Luckily, the car wasn’t badly damaged and was restored to its original condition. Undoubtedly, Lotus 49 is, in many ways, a milestone Formula One car and we can thank its fearless pilots, Colin Chapman, Cosworth, and Ford for that.