Alister McRae is a Scottish rally and rallycross driver who is most known as a brother of late Colin McRae and a son of British rally legend Jimmy McRae. Alister himself is also an established rally driver with 78 WRC starts between 1991 and 2012. 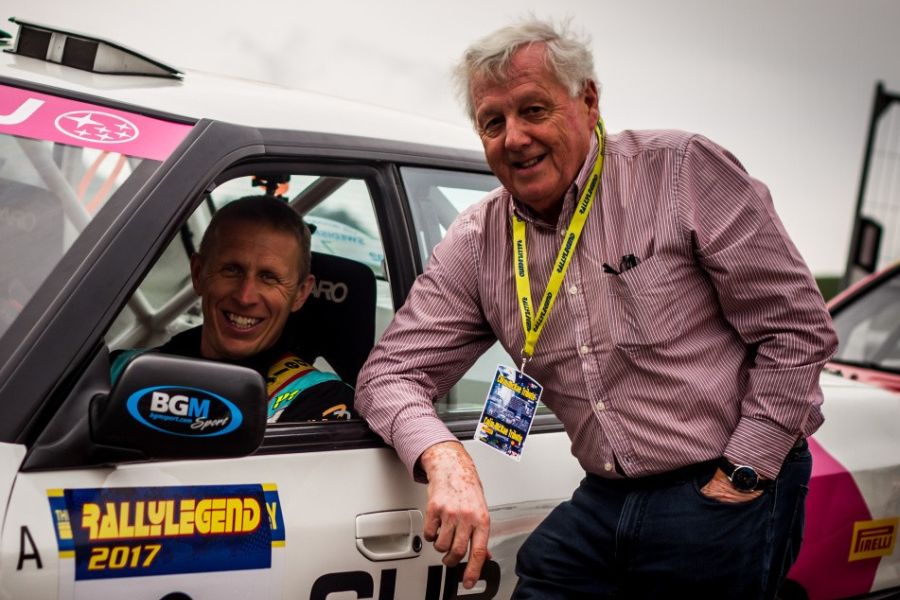 Alister was the third McRae to enter rallying

Born in December 1970 in Lanark, Scotland, Alister McRae had to wait until the age 18 to start his rally career. In that time, his father Jimmy was already the five-time British champion and his brother Colin recorded a couple of WRC attempts.

As a teenager, Alister competed in motorcycle trials and motocross, recording his rally debut in 1988. His first rally car was a Vauxhall Nova.

Rallying in Vauxhall Nova until 1991

Alister intensified his rally activities in 1989, driving a Vauxhall Nova in many national events and scoring several class wins or podiums. He was Class 1300 and Challenger champion. His navigator was David Senior.

In 1990, Alister finished third in the Scottish championship in a Vauxhall Nova and a winner of the 1300 Class. He was also using a Ford Escort RS Cosworth in one event. In 1991, he continued to drive Vauxhall Nova in the British events but also in few rounds of the European Rally Championship.

In November 1991, Alister McRae made his WRC debut, driving the #55 Subaru Legacy RS at Lombard RAC Rally. He retired with a broken turbo.

In 1992, Alister won the prestigious Shell Scholarship and switched to Ford Sierra RS Cosworth 4x4. With that car, he scored five N4 Class victories in the British Rally Championship, winning the N Class title and finishing third in the final overall standings, behind his brother Colin and Trevor Smith.

In November 1992, Alister had won the Production class and finished 14th overall in the British WRC round.

McRae brothers together in the Subaru World Rally Team

In 1993, Alister participated in the Swedish WRC round in a Ford Sierra RS Cosworth but he was excluded. He spent a season combining Subaru Legacy RS and Fords (Sierra or Escort) in British and international events.

In November 1993, both McRae brothers were members of the 555 Subaru World Rally Team at RAC Rally, driving a Subaru Legacy RS. Alister finished 10th in the #12 car, Colin retired in the #2 car. 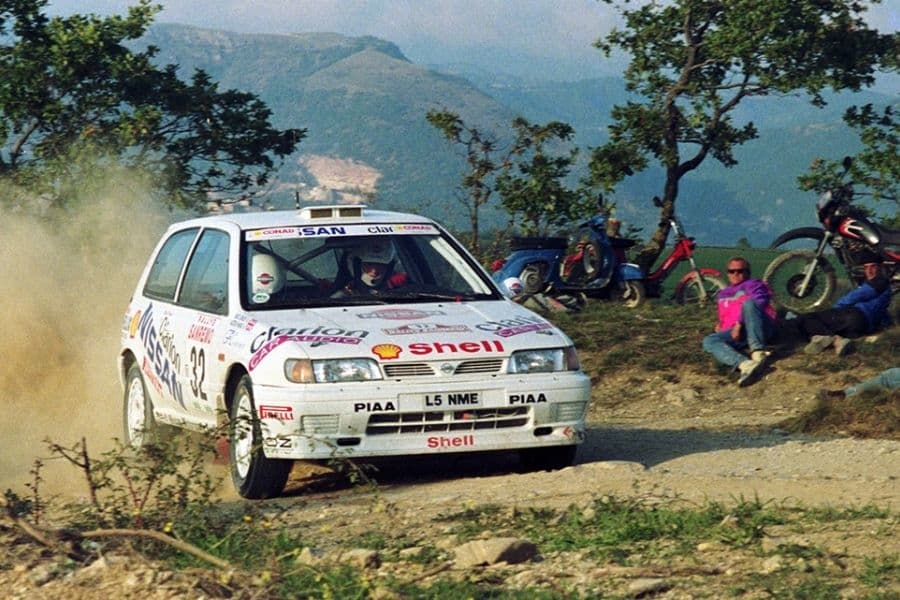 In 1994, Alister started to drive a Nissan Sunny GTi both in the British championship and international events. He recorded three WRC starts (Finland, Italy, GB), finishing best at Rallye Sanremo where he was first in the 2-Litre class.

In 1996, Alister scored two wins in a Ford Escort RS Cosworth, winning the Rally of Wales and Pirelli International Rally. Later that year, he was driving Volkswagen Golf  GTI in several events, including RAC Rally which counted for the 2-Litre WRC.

His only WRC attempt was at Rally Australia in a Honda Civic VTi entered by SanYang MTI Motorsports. He retired with a broken engine.

Four WRC starts with Volkswagen in 1997

In 1997, McRae was driving a Volkswagen Golf III Kit Car for SBG  Sport in five WRC events. His best result was the A7 Class victory at Rallye de Portugal.

He was using the same car in the British Rally Championship, scoring two overall victories and finishing third in the points, behind Mark Higgins and Martin Rowe. 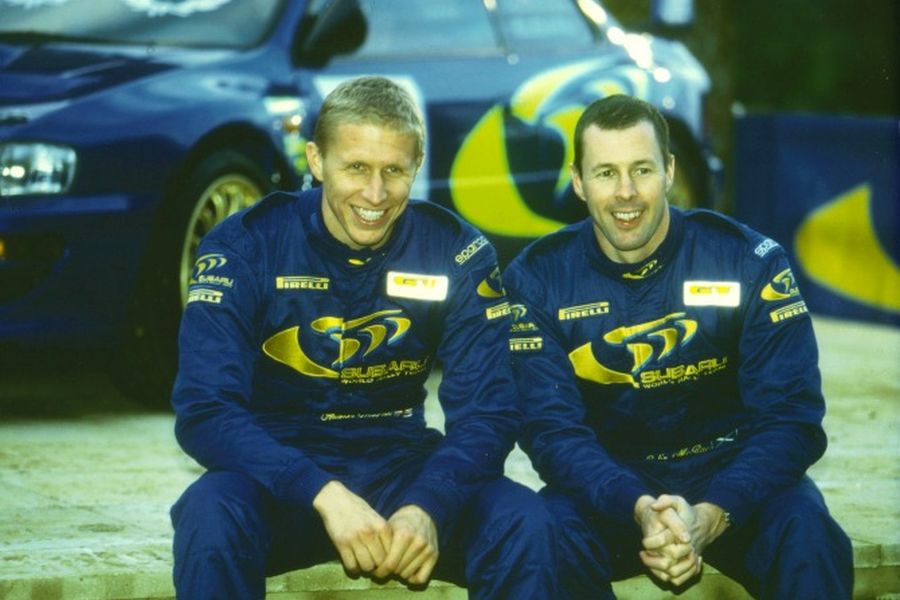 Alister McRae and Colin McRae in 1998

In 1998, Alister McRae joined Hyundai Motorsport, the newest entrant in the World Rally Championship. He was driving a Hyundai Coupe Kit Car in two WRC events (Catalunya, Corsica). For the rest of the season, he continued to drive SBG Sport's Volkswagen Golf III Kit Car, using that car in five WRC events and British championship. He won Scottish Rally to finish third in the national championship.

At the end of the season, at Rally GB, Alister again joined his brother Colin in the 555 Subaru World Rally Team. He was driving the #4 Subaru Impreza S4 WRC against brother in the #3 Subaru. Both of them failed to finish the rally. 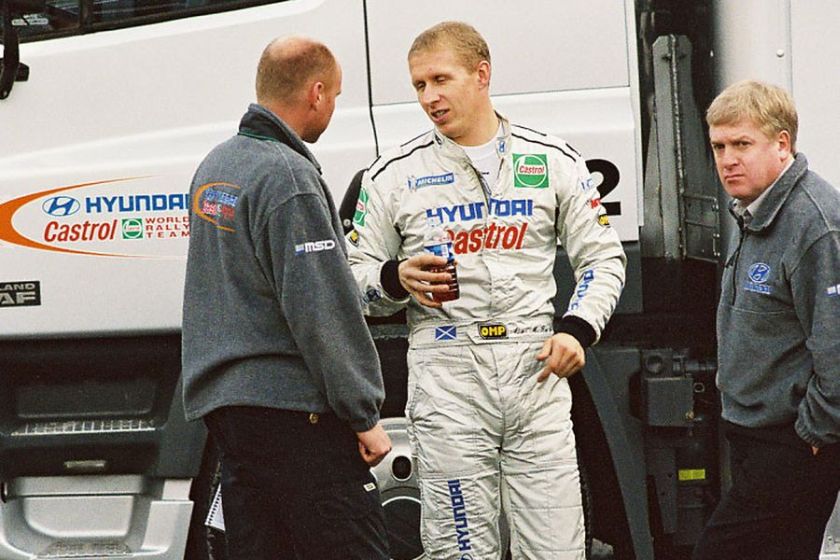 Developing and racing in a Hyundai Accent WRC

In 1999, Alister was exclusively a Hyundai driver, participating in a development of their first World Rally Car. While doing that, he participated in ten WRC events in a Hyundai Coupe Kit Car Evo 2, scoring two A7 class wins (Portugal and China).

In 2000, Hyundai Castrol World Rally Team entered the World Rally Championship with newly-developed Accent WRC, retaining Alister McRae as one of two full-time drivers. The other was Kenneth Eriksson. McRae's best result was seventh place in Argentina. Next year, he and David Senior stayed in a Hyundai Accent WRC, finishing best at Rally GB in fourth place. 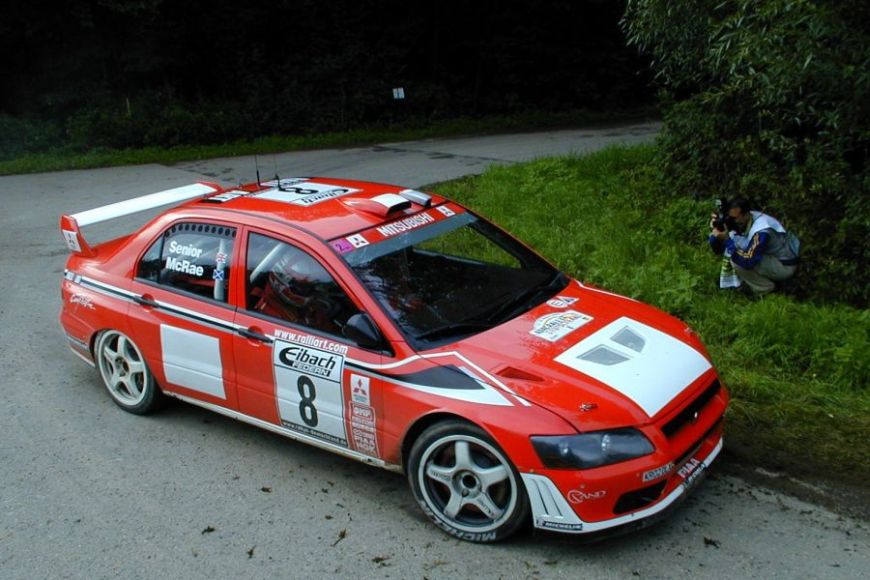 In 2002, Alister McRae was driving a Mitsubishi Lancer WRC

One season with Mitsubishi Ralliart

Following good performances with Hyundai, McRae was hired by Marlboro Mitsubishi Ralliart to drive the #8 Mitsubishi Lancer WRC, with Francois Delecour as a teammate in the #7 car. In eleven WRC starts, McRae's best result was the fifth place at Swedish Rally. He missed the last three rounds of the championship due to injuries suffered in a mountain bike crash.

Mitsubishi pulled out of rallying at the beginning of the 2003 season and Alister stayed without a seat. He recorded just one WRC start that year, driving a Mitsubishi Lancer WRC2 for Mitsubishi Ralliart Europe at Rally New Zealand, finishing in the sixth place.

Production WRC season with Subaru in 2004

He was on a podium four times before season's finale in Australia and still in a contention for the title. In Australia, he retired and dropped to fifth place in the final standings. 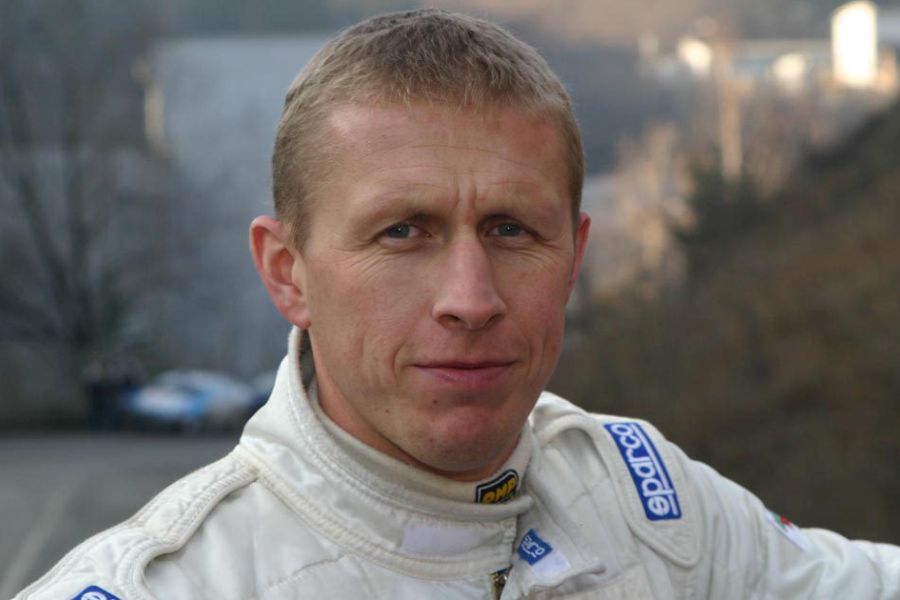 Alister McRae was out of rallying in 2005 and then returned in 2006, participating in the Chinese Rally Championship with Wanyu Rally Team's Mitsubishi Lancer Evo VIII. His new co-driver was Gordon Noble.

In May, McRae was driving Lancer Evo VIII at Zulu Rally of South Africa, which counted for the Intercontinental Rally Challenge, and he won the event. In December 2006, McRae had one-off WRC attempt, driving a Toyota Corolla S2000 at Wales Rally GB.

In December 2007, Alister replaced his brother in the annual Race of Champions event at Wembley Stadium, forming a Team Scotland together with David Coulthard. 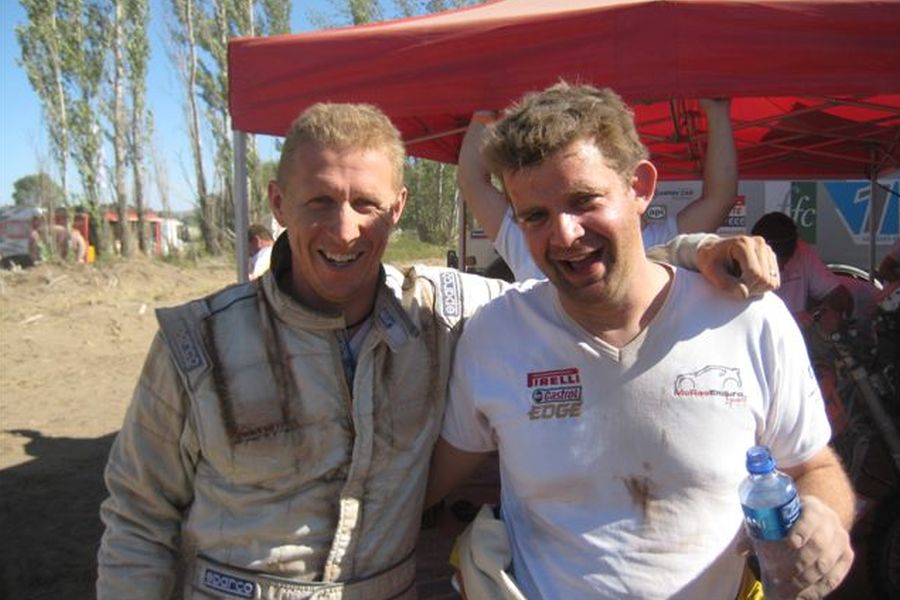 In 2008, Alister was out of rallying, participating only in the Colin McRae Forest Stages memorial event where he was driving a Ford Escort MkII.

In January 2009, Alister traveled to South America to made a debut at Dakar Rally. He participated as a driver of McRae Enduro Team but also as a support to other team members because the team was running four cars.

Later in 2009, Alister joined Malaysian manufacturer Proton to develop their Satria Neo S2000 rally car. After few events in 2009, including the second-place finish at Rally of Scotland, with William Hayes as a navigator, McRae had first full season with Proton Motorsport in 2010.

He competed mostly in the Asia-Pacific Rally Championship and two European rounds of the Intercontinental Rally Challenge. The results were disappointing, with DNFs in most of the events. 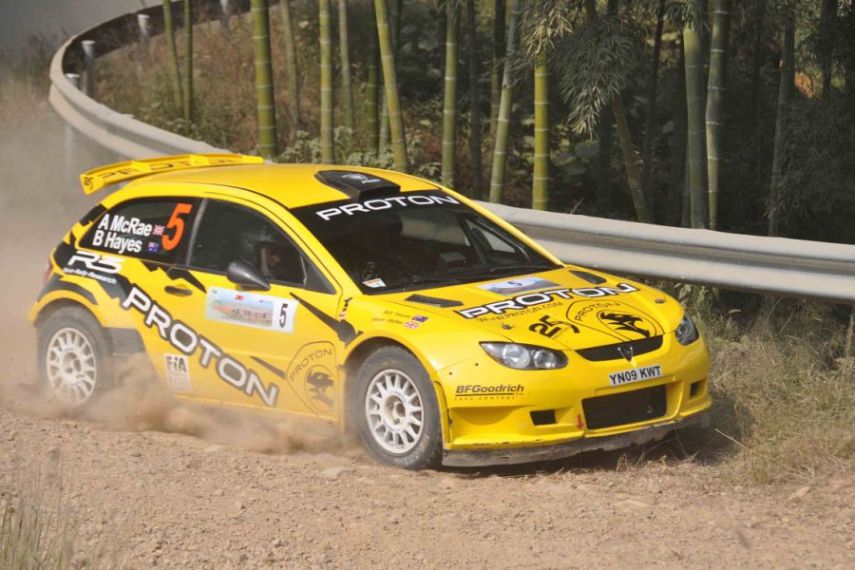 And then, in 2011, McRae managed to finish all APRC events, scoring one victory and three podiums to take the championship title in a Proton Satria Neo S2000. He was also a key driver for Proton to secure Manufacturers' title.

In February 2012, McRae was driving a Proton at Rally Sweden, finishing seventh in the SWRC classification. It was his last WRC attempt so far. In the APRC events, he was a winner two times, finishing second in the championship behind Chris Atkinson. 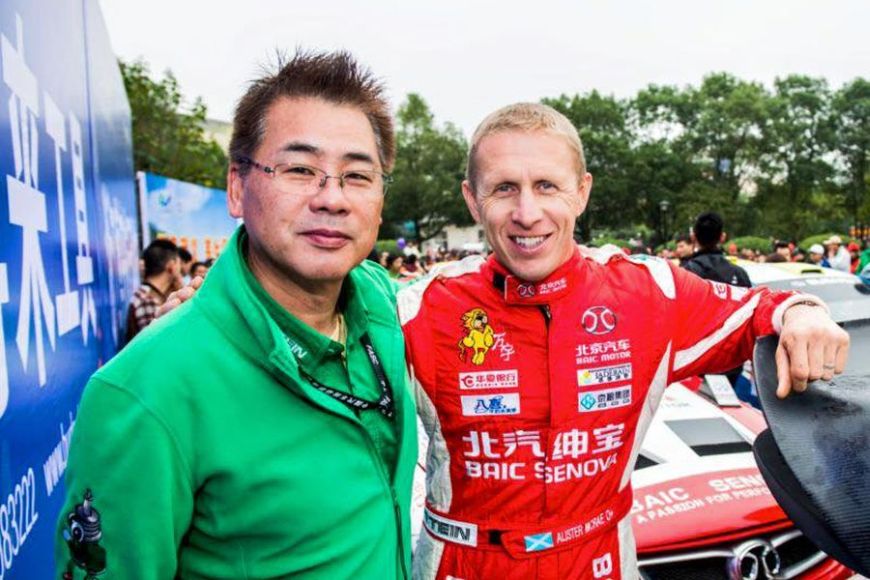 2015 – a season in the Chinese rally championship

In 2014, McRae was out of competitive rallying, participating just in some historic events. In 2015, he returned to full-time competition in the Chinese Rally Championship, driving the #15 BAIC Senova D50 for BAIC Saab Rally Team. He was without wins, scoring two podiums.

From 2016, McRae's rally programme is limited to historical events only. In 2017, he announced a participation in several events of the FIA World Rallycross Championship but he managed to start just once, in the French round at Circuit de Loheac. He was driving the #58 Volkswagen Polo for Loco World RX Team. 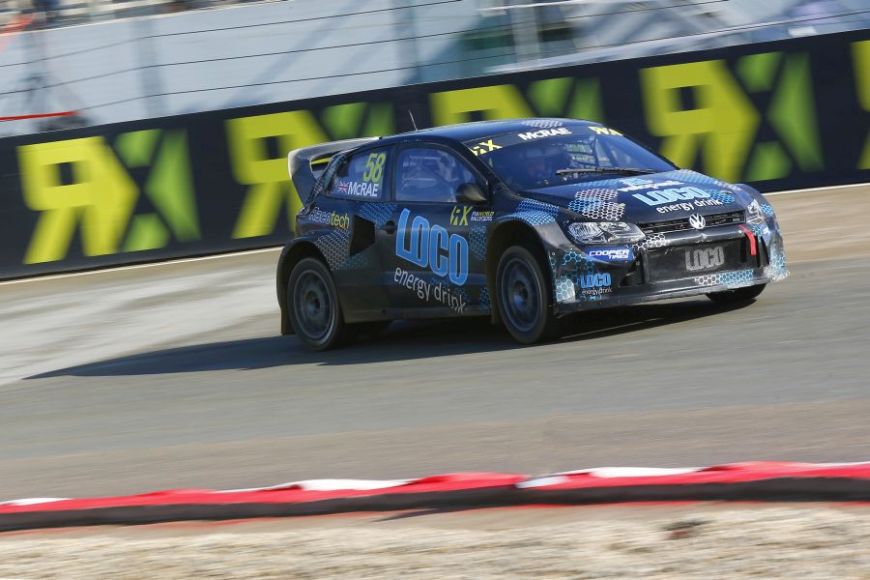