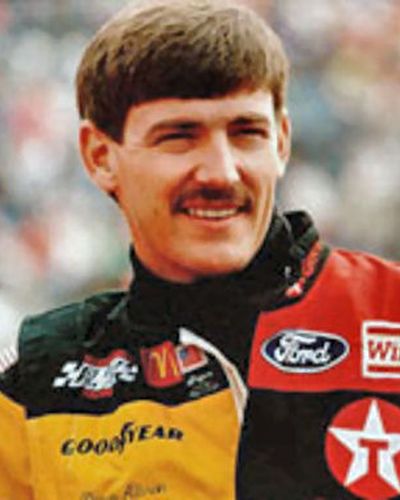 David Carl ’Davey’ Allison (1961-1993) was NASCAR driver, son of the famous champion Bobby Allison. His career was relatively short after he was killed in helicopter crash in 1993. Davey recorded 191 starts in the NASCAR Cup Series, winning 19 times, including a victory at 1992 Daytona 500.

Davey Allison was born on February 25, 1961, in Hollywood, Florida, and as a boy, he dreamt of becoming a racing driver but instead he played football and participated in athletics. After graduating from high-school, Davey started working for the team of his father. In 1979, he slowly began to race and after he made some progress, he entered ARCA Series in 1983.

During his first year in the series, Allison did really well and was named Rookie of the Year while next year he finished as a runner-up in the final standings. He continued to race in the ARCA Series and he was especially successful at his ’home track’ Talladega where he won on four occasions. Davey also debuted in the NASCAR’s lower divisions before he was given a chance to race in the Cup at Talladega. On his debut in the top NASCAR division, Allison finished 10th which was an impressive achievement.

During 1986 Allison was given more opportunities in NASCAR Winston Cup. He replaced his friend Neil Bonnett in #12 Chevy in a couple of races. Interestingly, the two were members of so-called Alabama Gang, a group of NASCAR drivers and their sons who later also became drivers in the most popular American racing series.

Allison and his crew celebrat win at Talladega in 1987

The start of 1987 season was relatively good for Allison. Driving a #28 Ford, Davey qualified second for the Daytona 500, season’s opening race, becoming the first rookie to start from the front row. However, he didn’t finish the race after his tire fell off. Later that year, Davey scored his first Winston Cup win at Talladega, in the infamous shortened race marked by huge accident in which his father Bobby was involved. Allison also added a victory at Dover on his account, ending his rookie season with 22 starts, two wins and nine finishes in Top 5.

Father and son made 1-2 at Daytona

The following year, Allison again started from the first row at Daytona 500 which was for the first time driven with carburetor restrictor plates. Davey struggled with his damaged car over the race, but in the final stage of the race, he moved up to the 2nd place, behind his father who defended well and took his third win at Daytona while Davey finished 2nd.

The rest of 1988 season wasn’t as good as the race at Daytona. Davey’s team had many problems and the results were relatively poor. Besides that, Allison’s father Bobby had an almost fatal crash at Pocono Raceway and battled for his life. However, Davey later won the race at Michigan which was probably the turning point of the season. Victory at newly-opened Richmond was the next success and was followed by a couple of Top 5 and Top 10 finishes. The team then was sold to Robert Yates and Allison was ready for the new start in 1989.

The start with the new team wasn’t good at all. He couldn’t score his first win of the season until the race at Talladega. Later he won Pepsi 400 at Daytona and at the end of the year Allison found himself at 11th position in the championship which was a major setback.

The things weren’t much better in 1990. After six opening races of the season, Allison wasn’t any closer to the top of the standings but with good tactics and a bit of luck, he won the race at Bristol. Until the end of the year, Davey won only once, at Charlotte, finishing the year at the 13th position.

Crew chief change proved to be a perfect move

After two pretty disappointing seasons, Allison wanted to bounce back in 1991. The start was well after he won the pole position for Daytona 500 but finished only 15th in the race after the accident caused by Dale Earnhardt. After the series of poor results, many feuds and disagreements with crew chief caused trouble within a team a Yates decided to fire Davey’s crew chief to keep Allison.

The arrival of Larry McReynolds to the place of a new crew chief revived Allison and he immediately scored some Top 5 finishes. The confidence was at a higher level and the team was ready for bigger achievements. Davey won Coca-Cola 600 race, then at Sears Point International Raceway and finally at Michigan. In the middle of the season, Allison was 5th in the standings which was a huge step forward.

The second half of the year also was good but with a little help of luck, it could have been even better. Allison scored two consecutive wins, had some Top 5 places and before the last race of the season, he was 2nd in the championship standings. The luck wasn’t at Allison’s side in the race at Atlanta after the dead battery in his car threw him back on the grid. He finished the race in 17th place while in the final standings of the season he was 3rd. Despite some bitter taste in his mouth after missing the chance to win Winston Cup, Allison had to be happy as he proved that he was capable of achieving big things.

Allison again missed a chance to win the Cup

In 1992, Davey Allison again narrowly missed the opportunity to become a champion. The start of the year again was excellent after he won Daytona 500 for the second time in his career, leading 127 laps of the race. Later in the season, he was the winner of Winston 500 at Talladega and some other races and became a championship leader at half point of the season.

The second half wasn’t as good. Allison had many Top 5 finishes but could hardly take a race win but was still in charge in the championship before the last race of the year at Atlanta Motor Speedway. However, other five racers had a chance of winning the Cup, so the race was rightfully considered as one of the greatest in the history of NASCAR. Unfortunately, Davey’s title hopes ended on lap 254, when he was in 8th place, which was enough to win the title. Ernie Irvan spun just in front of Allison who spun into the inside pit wall and damaged his car.In the final classification of 1992 NASCAR Winston Cup, Davey Allison was again 3rd.

Despite relatively slow and the unconvincing start of 1993 season, Allison was standing 6th overall after a couple of races, moving up to 5th at the half point, but was too far from the leader Dale Earnhardt. However, Davey was hoping that he can do better in the rest of the season and proved that by finishing 3rd at New Hampshire.

Sadly, Davey Allison lost his life on 13th of July 1993. The day before he and his friends from Alabama Gang went to Talladega Superspeedway, flying in Allison’s newly acquired helicopter. Davey piloted but he wasn’t experienced enough and made a mistake in the attempt of landing, so helicopter crashed. Allison was unconscious and died the next day in the hospital in Birmingham.

Allison was buried in Bessemer, Alabama. During his career, Davey scored 19 wins, 66 Top 5 and 92 Top 10 finishes. He also won 14 poles and earned more than $6.7 million He is survived by his wife, Liz, and two children, daughter Krista Marie, and son Robert Grey.