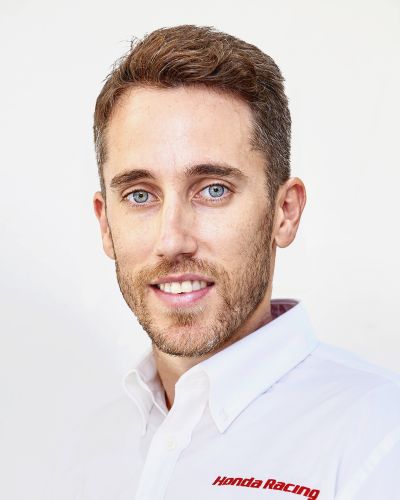 Esteban Guerrieri is a racing driver from Argentina who spent the most of his career in various formula racing categories, scoring the greatest success in the North American Indy Lights series where he was a vice-champion for two years in a row (2011 and 2012). Earlier in a career, he was the Argentinean Formula Renault champion in 2000 and Formula Renault Eurocup champion in 2003.

Most recently, Guerrieri spent a couple of seasons in world's premier touring car competitions (WTCC and WTCR). He was most successful in 2019, scoring four wins in a Honda Civic Type R and finishing second in the championship.

Start from the lower ranks of formula racing

He was born on January 19, 1985, in Buenos Aires and as a boy raced karts with a considerable success. In 2000, Esteban became Formula Renault Argentina champion and in the following years competed in various Formula Renault Series.

In 2001, Guerrieri moved to Formula Renault 2000 Eurocup but he failed to settle in the new environment and finished 10th overall after he failed to finish half of the races. In the following year, he raced in Formula Renault Germany with Jenzer Motorsport and did a fine job. The Argentian driver won 4 out of 14 races before finishing 3rd in the championship.

The season of 2003 was even better. Driving for Cram Motorsport, Guerrieri was a runner-up in the Italian Formula Renault 2.0, losing to Franck Perera, while Formula Renault 2000 Masters he became a champion after scoring three race wins and beating some well-known names like Simon Pagenaud, Giedo van der Garde, Pastor Maldonado, etc.

Ups and downs were frequent in the following years

Esteban’s progress through the ranks of formula racing continued with a move to Formula 3000 International series. Driving for BCN Competicion, he scored only one podium finish before taking the 7th place in the standings. The same year Guerrieri had a one-off appearance in the Formula Renault V6 Eurocup.

In 2005 Argentinian racer moved to Formula 3 Euro Series with Team Midland. The results were below the expectations as he didn’t score a podium finish out of 20 races, so he finished 16th overall. However, Guerrieri stayed in the series for another year and the results improved a lot. As a driver of Manor Motorsport, he scored two wins and a total of six podiums before finishing 4th in the championship, behind Paul Di Resta, Sebastian Vettel, and Kohei Hirate.

The following season wasn’t nearly good as the previous one. Esteban shared his duties between various series but the priority was British Formula 3. As a member of Ultimate Motorsport, he finished 13th overall, without a podium finish. In 2007 Esteban also appeared as a guest in Formula 3 Euro Series and Formula Renault 3.5 Series, while in the Macau Grand Prix he was 15th driving for Signature Team.

In 2008 Guerrieri raced with Signature Team in two championships. In Formula Renault 3.5 Series he won the season-closing race in Barcelona before finishing 8th in the Drivers’ Championship. While in the British Formula 3, where missed most of the season, Argentinian driver took the 12th place with one podium finish on his account.

In 2009, Guerrieri drove for various teams in the Superleague Formula series, winning two races in the process. For 2010 he has returned to Formula Renault 3.5 full-time and did a good job driving ISR Racing. He scored six wins and other two podiums but that wasn’t enough for the title. Even after missing three races due to a tight budget, Guerrieri finished 3rd overall, behind Mikhail Aleshin and Daniel Ricciardo.

In parallel to his Formula Renault duties, Guerrieri also appeared as a guest in Auto GP and TC 2000 racing series at his home in Argentina. He desperately tried to secure a drive in 2011 Formula 1 with Virgin Racing but failed in an attempt to raise around $8 million, so his dream of making a debut in the most popular championship faded away.

Departure to the US and good results in the Indy Lights

Guerrieri decided to try his luck in the United States and in 2011 he raced in the Indy Lights with Sam Schmidt Motorsport. The results were above all expectations. He scored three wins, was the best rookie driver and finished the season as a vice-champion, losing to his teammate Josef Newgarden.

Move to the IndyCar in the following season looked logical. Guerrieri had a test with the KV racing Technology team but again failed to raise the money. That’s why in 2012 he stayed in Indy Lights with Sam Schmidt Motorsport and for the second year in a row scored three race wins before finishing again as a vice-champion, this time narrowly losing to Tristan Vautier.

Return to Argentina in 2013

Unable to secure a seat in the US, Guerrieri in 2013 returned to Argentina. He raced in the Top Race V6 Series and Turismo Carretera but without too much success. In the following year, he switched to Super TC2000 with Toyota Team Argentina and finished 16th overall, with one podium finish on his account.

Esteban Guerrieri as a member of Toyota Team in Super TC2000

The season of 2015 was much better. Esteban moved up to the 8th position after scoring one victory and another one podium. In 2016, the results he scored in the Super TC2000 were pretty the same and Guerrieri finished 7th in the standings but what was the highlight of the year was a debut in the FIA WTCC.

He raced as a guest for Campos Racing in the Race of Argentina and after he has retired from the opening race, Esteban scored points in the main race after taking the 6th place.

In 2016, Guerrieri debuted in the WTCC and then spent full season in the championship in 2017

In 2017, Guerrieri continued to race in the Super TC2000 but his main focus was in the FIA World Touring Car Championship. He was driving the #86 Chevrolet RML Cruze TC1 for Campos Racing in seven rounds, scoring two victories in Morocco and China. For the last three rounds, he replaced injured Tiago Monteiro in the Honda factory team, scoring one more victory with #86 Honda Civic in season's finale at Losail International Circuit. At the end of the season, he was fourth in the overall standings. 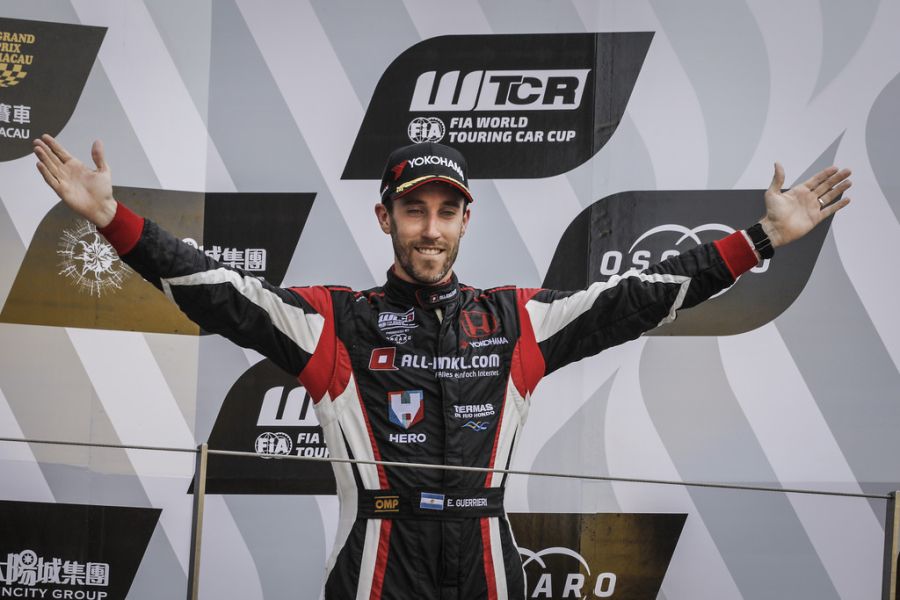 Guerrieri is celebrating a victory at Macau Guia Circuit

In 2019, Guerrieri stayed with ALL-INKL.COM Münnich Motorsport, continuing to drive the #86 Honda. He started the season with a victory in the season-opening race in Morocco.

Later in the season, he was among the front-runners and championship contenders, winning three more races, including one victory in season's finale at Sepang, but he stayed short behind Norbert Michelisz, finishing second in the points.