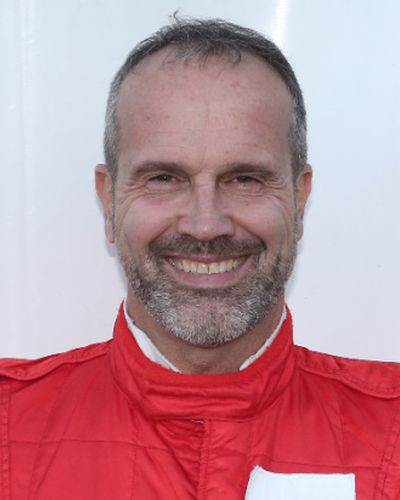 Fabrizio Giovanardi is an Italian former racing driver, one of the best European touring car drivers ever and one of the Top 10 BTCC drivers of all time.

In a career, which lasted until 2018, Giovanardi has won nine major touring car championship titles - three European titles, three time in Italy, two British trophies and one championship title in Spain. Six of nine titles he won driving Alfa Romeos, two with Vauxhall and one sole title with Peugeot.

Fabrizio Giovanardi, nicknamed Gio, was born on December 14th, 1966, in Sassuolo, Italy. As usual for many racing drivers, he started his career with karts, being successful in the Italian and international competitions. In 1987, Fabrizio moved to bigger racing cars, entering the Italian Formula 3 Championship with Prema Racing. In eleven races of his debut season, he scored one podium and finished 11th in the championship.

Gio and Naspetti travel to the USA

He stayed one more season with Prema in Formula 3, finishing third in the 1988 championship with two wins in twelve races. The champion was Emanuele Naspetti, who was Giovanardi' co-driver in the one-off appearance next year in the race of the 1989 IMSA GTP Championship. In September, Giovanardi and Naspetti traveled to the USA to compete in the 2 hours of San Antonio, driving the Alba AR9 for DeBlasi Racing. They didn't reach the finish due to engine failure.

Three season in the International Formula 3000

Giovanardi's career turned into another direction in 1991, after he debuted in the Italian Touring Car Championship, driving the factory-backed Peugeot 405 Mi16 and winning five races in S2 class. In 1992, he expanded his activities to a full season and with eleven victories in 20 races he won the S2 class title, his first of many touring car titles.

Second in the championship, behind Ravaglia

With the victorious car, the Peugeot 405 Mi16, he entered the main class of the 1993 Italian Touring Car Championship and immediately became one of the title contenders, winning five races. The champion was BMW's Roberto Ravaglia, Giovanardi was seven points short and finished second, ahead of Alfa Romeo's  Gabriele Tarquini. Giovanardi stayed one more season with Peugeot Italia, scoring seven podiums in 1994, but without victories. He was third in the final standings.

After four seasons with Peugeot, Fabrizio moved to Nordauto Engineering to drive Alfa Romeo 155 TS in the 1995 Italian Touring Car Championship. It was the most important move in his career because he stayed with Alfa until 2005 and won six titles driving the cars of the Italian manufacturer.

He won no titles in first two seasons with Alfa Romeo, despite winning many races. In the 1995 Italian championship, he won one race and finished third, behind two Audi drivers Emanuele Pirro and Rinaldo Capello. He also had one guest appearance in the DTM, driving Alfa Romeo 155 V6 Ti at Norisring. He retired in the first race and didn't start the second race.

In 1996, Giovanardi had the double program, driving Nordauto's Alfa in both Italian and Spanish touring car championships. He participated in 30 races in both countries, winning five times, to finish 5th in the Italian championship and 6th in the Spanish championship.

The classification was converted in 1998 when Giovanardi won the Italian Touring Car Championship ahead of Naspetti. In 20 races with new Alfa Romeo 156, Giovanardi had an impressive score of nine wins and 18 podiums. Driving the Alfa Romeo 156, he had a guest ride at Norisring in the German Supertouring Championship but didn't get any points.

In 2001, Giovanardi participated in Ferrari's test

Alfa continued to dominate in the European touring series

In 2000, the Italian Supertourismo was upgraded and became the European Supertouring Championship. Giovanardi's Alfa Romeo 156 was again the dominant car and he took the championship trophy ahead of Peter Kox in the Honda Accord. In 20 races, Giovanardi won five times and added seven more podiums.

The newly crowned ESCT champion had the opportunity to test Ferrari Formula One car early in 2001.

The fantastic streak of six consecutive titles with Alfa was stopped in 2003 when Giovanardi joined Ravaglia Motorsport to drive the BMW 320i. He wasn't successful in the conversion to rear-wheel drive and finished only ninth in the European Championship, with three podiums in twenty races.

One season with BMW wasn't successful

Return to Alfa and ETCC season in the factory team

No luck with BMW, he said, and returned to the wheel of Alfa Romeo in 2004, joining Autodelta team, which was in a fact his old team with a new name. Giovanardi managed to win just one race (in Valencia) to finish 5th in the 2004 championship standings.

In 2005, the ETCC was converted to the World Touring Car Championship and Giovanardi became the part of the Alfa Romeo's four-driver factory team, alongside Gabriele Tarquini, James Thompson and Augusto Farfus. Giovanardi was the most successful of four, winning four races and finishing third in the final classification, behind BMW's Andy Priaulx and Dirk Muller.

Alfa Romeo pulled out of the WTCC after the 2005 season, so Giovanardi had to find a new team. In late 2005, he tested a Vauxhall Astra Sports Hatch for the Triple Eight/VX Racing BTCC team and he joined the team for the 2006 British Touring Car Championship season.

Giovanardi was the 2007 BTCC champion with Vauxhall Vectra

In 2007, the new Vauxhall Vectra was introduced and it became Giovanardi's championship-winning car. The #5 Vectra was victorious in ten races but the championship fight was resolved in the very last race at Thruxton. Seat Sport's Jason Plato entered the final round with nine points advantage over Giovanardi. After Giovanardi has won two races at Thruxton, the Plato's advantage with one race to go was just one point. In the last race, Giovanardi crossed the finish line behind winner Mat Jackson, Plato was fourth, and Giovanardi won the championship by three points.

One more exciting BTCC season followed in 2008, but this time, five victories were enough for Giovanardi to take his second BTCC trophy in a row, again in the VX Racing's Vauxhall Vectra. He secured the title two races before the end.

In 2008, Giovanardi traveled to Australia to participate in three races of the V8 Supercars Championship, primarily in the Bathurst 1000, alongside Marc Hynes in the Vodafone/Triple Eight Race Engineering's Ford Falcon. Before Bathurst, he tested the car in two races at Phillip Island. In the famous race at Mount Panorama, Giovanardi and Hynes finished 15th.

In 2009, Giovanardi continued to drive for VX Racing in the BTCC, finishing third in the points after five wins and fifteen podiums. The number of wins and podiums was the same as in 2008, but this time, it was enough for third place in the championship, behind Colin Turkington and Jason Plato. The title fight was again resolved in the very last race and the gap between first and third was just nine points at the end.

As Vauxhall left the BTCC after the season, Giovanardi was once again faced a jobless situation. He secured the sponsorship of Uniq for the season-opening round of the 2010 British Touring Car Championship, driving the Vauxhall Vectra for Triple Eight at Thruxton. He won two of three races. The sponsor pulled out before the second championship round and Giovanardi had to leave BTCC.

Giovanardi was driving Porsche in the 2010 Superstars International Series

Driving Porsche in the Superstars Series

During 2010, he joined the N.Technology team to compete part-time in the Italian-based Superstars Series. He won four of six races, driving the Porsche Panamera S, to finish fifth in the points.

Gio has won ETCC at Salzburgring

In 2011, Giovanardi had no full-time job and he participated occasionally in few different competitions. He joined Hartmann Honda Racing in two races of the Scandinavian Touring Car Championship and two races of the European Touring Car Cup. He won one race in the STCC and one race in the ETCC (at Salzburgring), taking the ETCC crown ahead of Pepe Oriola.

In 2011, Giovanardi has won European Touring Car Cup at Salzburgring

Two participations at 24 hours of Nürburgring

Giovanardi also appeared in the 2011 Italian GT Championship, scoring one podium with AB Motorsport's Porsche. At 24 hours of Nürburgring, he was hired by Scuderia Cameron Glickenhaus to drive revolutionary P4/5 Competizione. His co-drivers were Mika Salo, Luca Cappellari and Nicola Larini. They rounded 133 laps around Nordschleife circuit to finish 39th in the overall classification.

Giovanardi returned to Nürburgring Nordschleife in 2012, partnering Nicola Larini and Manuel Lauck in the #1 Ferrari P4/5 Competizione of the Global Partner Enterprise. They finished 12th overall and first in the E1-XP class.

Giovanardi reactivated in 2013, competing half season in the Superstars Series, driving Porsche Panamera S for Petri Corse team. He scored no wins and podiums in eight races to finish 12th in the points.

Gio in the cockpit of the 2014 Airwaves Racing Ford Focus

One more BTCC season before retirement

When everybody expected that his career is over, 48-year-old Giovanardi entered 2014 British Touring Car Championship to compete full season in the Airwaves Racing's Ford Focus ST, prepared by Motorbase Performance. In 30 races, he recorded eleven Top 10 finishes, including his only podium and third place at Thruxton. He finished the championship in the 13th position.

Giovanardi reactivated himself in 2018

He was hoping that he would continue to race for one more season, but the main sponsor Airwaves pulled out and he was again without a drive. At the age of 49, Giovanardi became the retired race car driver. But not for long.

In 2017, he participated in one round of the Italian TCR championship with Seat Leon and then reactivated himself on a full-time basis to drive an Alfa Romeo Giulietta TCR for Romeo Ferraris/Team Mulsanne in the 2018 WTCR - FIA World Touring Car Cup. Next year, he went to retirement again but, who knows, maybe he will race again.