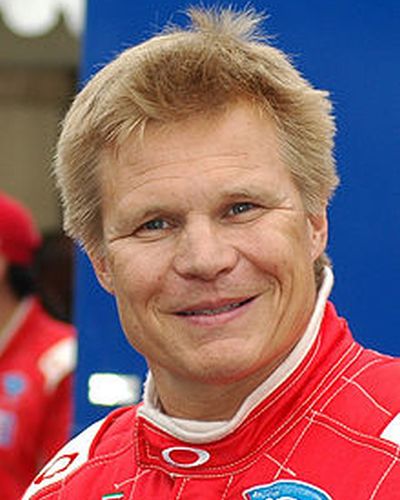 Mika Salo is probably best known as the former Formula 1 driver but his best results were scored in the endurance racing. Mika Juhani Salo (his full name), was born on November 30, 1966, in Helsinki and had a long journey through the ranks of motorsports before he got an unexpected chance to debut in Formula 1.

As almost every racing driver, as a boy he had competed in karting before he moved to Formula Ford, racing across Scandinavia and Europe. Next stop was British Formula 3 championship in which he has competed with another Finn and future F1 champion Mika Hakkinen. Interestingly, the two were main rivals in 1990 when Hakkinen finished first in the standings while Salo was a runner-up.

With Mika Hakkinen during their F1 days

The future looked bright to Salo but everything has changed when he was caught in London driving under the influence, so he was unable to get an FIA Super Licence. His dreams of a swift entry into the Formula 1 was ruined and the Finn had to find a new opportunity.

After four years in Japan, Mika Salo jumps into F1

In 1991, Salo started competing in Japanese Formula 3000. Mika spent four long years in Japan failing to impress but was able to pick some experience. His best result was 7th place in the Drivers’ championship in 1994, his last season in the series.

Surprisingly, he was offered a drive in Formula 1 late in 1994. Lotus team called him only a few days before the Japanese Grand Prix and Salo grabbed his chance even though he didn't have time to test the car. Racing in appalling conditions at Suzuka circuit, he managed to finish 10th, being one of the few drivers who finished the weekend without a spin at the track at some stage.

Lotus team ceased at the end of the year, but Salo stayed in Formula 1 in 1995. He signed with Tyrrell's team and stayed there for three years. During that period he had many ups and downs but to be realistic he did fulfill expectations knowing that Tyrrell wasn’t the team that was ready for high achievements.

As a driver of Tyrrell, 1995 Australian Grand Prix

In his first season with Tyrrell, Mika Salo finished 15th in standings, scoring in three races with 5th places in Italy and Australian Grand Prix races as his best results. The following year was pretty much the same as the previous one. The Finn again picked few points in three races, finishing 5th in Brazil and Monaco, while in Australia he was 6th, eventually moving up to 13th in the final standings. Finally, the season of 1997 was a big downfall. He couldn’t collect a single point so he dropped to the 17th in the championship.

Waiting for the right opportunity

Salo moved to Arrows in 1998 but again couldn’t make a serious impact driving an uncompetitive car. However, Mika was able to finish 4th in Monaco Grand Prix which was the only race in which he scored some points, which unfortunately wasn’t enough to secure a full-time ride in the following year.

Salo had to wait for his chance in 1999. Luckily, it didn’t last long. He was given a chance with BAR-Honda team in three races in which he replaced injured Ricardo Zonta. Finn did relatively well but still failed to win any points and was released when Zonta recovered and returned to the seat.

Ferrari offered him a chance to win the race in Formula 1 Championship but...

Finn sat had to miss three races before he was given another opportunity, this time replacing injured Michael Schumacher in Ferrari. With a proper car, Finn confirmed that he was able to fight for the top. He finished 2nd in 1999 German Grand Prix, losing to his teammate Eddie Irvine by only one second. Salo led most of the race but the team ordered him to allow Irvine to pass him as the British driver was fighting for the title, so Mika missed his biggest chance to finally win the race.

In the Italian Grand Prix, Salo finished 3rd, behind Heinz-Harald Frentzen and Ralf Schumacher. With 10 points on his account, he took 10th place overall what is the best result in his career.

Notable performances with Ferrari persuaded Sauber F1 team officials to sign him for 2000 campaign. Salo again found himself in the small team and with the car unable to compete with big guns but still he was able to finish in points in four Grand Prix. Finn finished 5th in Monaco and Germany, while at Imola and in Austria he was 6th. With six points, Salo finished 11th in the championship.

He left Sauber at the end of the year and joined Toyota. The Japanese team was preparing for the debut in 2002, so Salo missed 2001 season. Finally, the debut with Toyota was very good as he managed to score a point in Australia, finishing 6th. He had the same result in Brazil in the third race of the season but after that, he had a large downfall. He was unable to collect points from the remaining 14 races, so it wasn’t a surprise when Toyota decided not to retain his services.

That was the end of Salo’s Formula 1 career. The following year, Salo appeared in four races of CART series where his best result was 3rd place in Miami. The same year he also debuted in 24 Hours of Le Mans, in the seat of an Audi R8 alongside Frank Biela and Perry McCarthy but failed to finish the race.

Behind a wheel of Risi Competizione's Ferrari at Portland

This was the beginning of his career in endurance racing during in which he had some very good results. In 2004, Salo won two FIA GT Championship races and once finished second behind a wheel of a Maserati. In 2006, he won the class in 24 Hours of Spa, driving a Ferrari F430. In the ALMS he helped his team Risi Competizione to win Teams’ Championship title and also scored a class win in 12 Hours of Sebring.

In 2008, the Finn won the GT2 class at Le Mans for the first time in his career, driving a Ferrari F430. The year of 2009 was probably the best in Salo’s career. Piloting the same car like he drove one year before, this time alongside Jaime Melo and Pierre Kaffer, Mika defended his Le Mans crown but also won Petit Le Mans and 12 Hours of Sebring.

Since 2010, Mika Salo sporadically appeared at events of various competitions. He has competed in the V8 Supercars Championship, GT1 World Championship, International Superstars Series, Volkswagen Scirocco R-Cup and even in the FIA World Endurance Championship. In 2014, Salo added another important trophy to his collection. Driving a Ferrari 458 GT alongside John Bowe, Peter Edwards, and Craig Lowndes, he won 12 Hours of Bathurst.

At one point of his career, Mika Salo also started working as a commentator of Formula 1 races for the Finnish television but also worked as a host of one of the most popular cars TV shows in Finland.