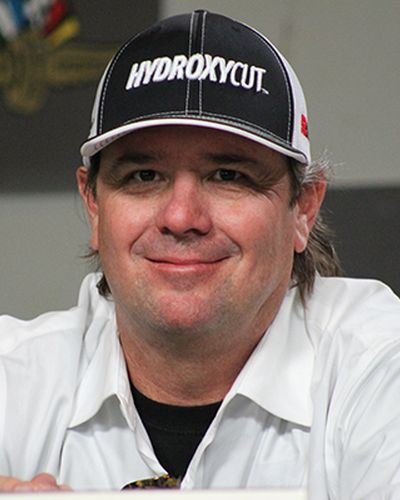 Jimmy Vasser is an American former racing driver and current team co-owner. He recorded 233 starts in the American open-wheel series between 1992 and 2008, winning ten races and achieving his career-best result in 1996 when he was the Indy Car World Series champion.

He was also successful in the sports car racing, reaching two overall podiums at 24 hours of Daytona. Since 2004, Vasser is a co-owner of the PKV Racing team (now KV Racing Technology). The team's greatest result was 2013 Indy 500 victory for Tony Kanaan.

James "Jimmy" Vasser was born on November 20, 1965, in Canoga Park, California. After few years in minor racing series, his first bigger success was a second place in the 1991 SCCA Toyota Atlantic Championship. He won six of thirteen races, losing a title by four points from Jovy Marcelo.

After his Daytona 24h class victory, Jimmy debuted in the PPG Indy Car World Series, driving the Lola-Chevrolet for Hayhoe/Cole Racing and finishing 22nd in the points. His best result was seventh place at Long Beach. He qualified for his debut at Indianapolis 500, starting 28th and finishing 21st after he crashed out on Lap 94. It was the race in which his rival from the previous year Jovy Marcelo lost his life in the practice crash.

During 1993, Vasser had two guest appearances in the NASCAR Busch Series, driving the #30 Dodge for Todd Braun at Daytona International Speedway and Milwaukee Mile. In the CART competition, Vasser spent two more seasons with Hayhoe/Cole Racing. In 1993, he reached his first podium, finishing third at Phoenix International Raceway. In 1994, he finished in the fourth place two times, at Surfers Paradise and Indianapolis 500.

Joining Chip Ganassi Racing in 1995, winning the championship in 1996

In 1995, Vasser joined Chip Ganassi Racing and became one of the front-runners, scoring four podiums with #12 Reynard-Ford. He finished eighth in the points. At 1995 Indianapolis 500, Vasser started 9th and crashed out on Lap 170.

The infamous CART-IRL split followed in 1996. Chip Ganassi Racing stayed in the CART Indy Car World Series, with Jimmy Vasser and Alex Zanardi as drivers. Vasser has won four races in the first part of the season, adding only one more podium later in the season, to take his first and only championship title in a career. He won the title with a 22-point advantage over Michael Andretti and Alex Zanardi.

Alex Zanardi and Jimmy Vasser were teammates for three seasons

Vasser was among leading drivers for two more seasons, finishing third in 1997 and second in 1998. His teammate Alex Zanardi was a champion in both seasons, securing three consecutive CART titles for Chip Ganassi Racing.

In 2000, Vasser's last season with Chip Ganassi Racing, he finished sixth in the points with one victory (Houston) and three more podiums.  In May 2000, Vasser returned to Indianapolis 500, which was the part of the Indy Racing League. He was seventh. Next year, he repeated his best result at Indy 500, finishing fourth in the Chip Ganassi Racing's #44 car.

For 2001 CART Championship season, Vasser moved to Patrick Racing, to drive alongside Roberto Moreno. Without wins and podiums, Vasser finished 12th in the points. Another change of team followed in 2002 when Vasser was driving for Team Rahal. On November 3, Vasser scored his last CART victory, at California Speedway, Fontana. He was seventh in the points at the end of the season.

Without sponsorship at Rahal for 2003 season, Vasser had to find an available seat in another team. He joined Stefan Johansson's American Spirit team. The team ran an old Reynard chassis while the most of the teams had a new Lola chassis. Vasser's best result was third place at Surfers Paradise and he finished 11th in the points. In May 2003, Vasser reunited with Rahal Letterman for his final run at Indianapolis 500, retiring after 102 laps.

In 2004, Vasser became co-owner of PKV Racing along with Dan Pettit and Kevin Kalkhoven. He was also driving the teams' #12 car, scoring a second place in Toronto as his best result, to finish 8th in the points. He was even better in 2005, scoring two podiums (Las Vegas and Surfers Paradise) to finish sixth in the points.

Vasser's last race was Grand Prix of Long Beach, the season-opening race of the 2006 Champ Car World Series season. He finished 14th. After that race, he retired from professional racing and focused on his ownership role.

He didn't retire completely, as he switched his activities to the sports car racing, including regular appearances at 24 hours of Daytona. In 2006, he participated in three races of the Grand American Rolex Series season with GAINSCO/Blackhawk Racing. He was driving the #99 Riley-Pontiac prototype, sharing the car with Alex Gurney, Bob Stallings, Rocky Moran Jr and Jon Fogarty. In 2007, he again drove for the renamed GAINSCO/Bob Stallings Racing in two races (Daytona 24h and 1000 km Miller).

Vasser clinched his second Daytona 24h podium in a career in January 2008. He finished second overall, sharing the #99 Riley-Pontiac with Alex Gurney, Jon Fogarty and Jimmie Johnson. The same crew returned to Daytona two more times, finishing seventh in 2009 and retiring in 2010.

Vasser's team was renamed to KV Racing Technology in 2008. As a team co-owner, Vasser witnessed to Tony Kanaan's victory at 2013 Indianapolis 500. Since 2014, the team's main driver is Sebastien Bourdais, who scored four wins in three seasons.

Besides leading IndyCar team, Jimmy Vasser is selling cars is Napa, California. He owns Toyota and Chevrolet dealership. He is also an owner of the V12 Vineyards.