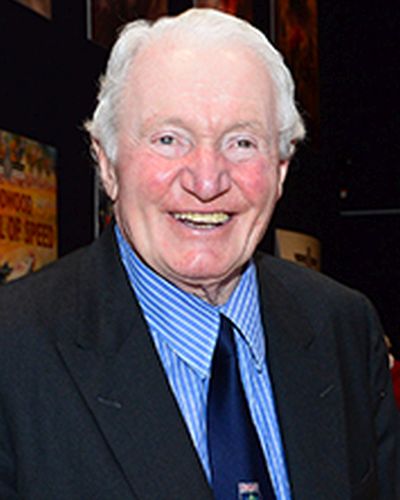 Paddy Hopkirk is a former rally driver from Northern Ireland, who was active in the world of rallying during the 1960s and 1970s. He is best known for winning the 1964 Rallye Monte-Carlo in a Mini Cooper S. He was also among the first four inductees into the Rally Hall of Fame, together with Rauno Aaltonen, Erik Carlsson and Timo Mäkinen.

Patrick Barron Hopkirk was born on April 14th, 1933 in Belfast. He started racing at the age of 22 with his first rally car - a Volkswagen Beetle. In the late '50s, he switched to Sunbeam Rapier, with which he entered his first rally in Monaco in 1961. He finished 13th, but scored the podium in the following year, achieving 3rd place.

He was a member of the Sunbeam Talbot team at the 24 Hours of Le Mans two years in a row. In 1961, Paddy and Petter Jopp were driving the #35 Sunbeam Alpine and retired from the race after 130 laps. They suffered the engine problems and stopped in the pits but they were disqualified after the mechanics addead some oil before the allowable minimum distance had been reached. One year later they retired again, after 187 laps.

Sixth at Rallye Monte-Carlo in the first attempt with Mini

In 1963, Paddy finally succeeded in finishing the race at Le Mans, sharing the MG MGB with Alan Hutcherson and finishing 12th overall and best in the class. In the same car, Paddy and Andrew Hedges finished the 1964 24h Le Mans ranking 19th overall and 6th in the class. Hopkirk and Hedges improved their performance up to the 11th place overall and 2nd in the class at the 1965 Le Mans. In 1966, the duo changed cars, switching to an Austin-Healey Sprite Le Mans, and weren't able to finish.

The  year 1963 brought the start of Paddy's connection with the British Motor Corporation. At the rally stages he got a new revolutionary car, the Morris Cooper, and finished 6th at Monte-Carlo.

In 1964, he continued his good performance and together with his co-driver Henry Liddon snatched a legendary victory! They won the world's most popular rally in the #37 Mini Cooper S, with the registration number 33 EJB. Years later, Hopkirk's team-mates Timo Makinen and Rauno Aaltonen won the Rallye Monte-Carlo with Minis, while he was more successful at other events including the Alpine Rally, Circuit of Ireland Rally and Rally Acropolis.

Among rallies and Le Mans, Paddy participated in circuit racing at the famous Bathurst 500 race in Australia. As a member of the BMC Works Team, he contested three times at the Mount Panorama Circuit. He drove at Bathurst in a Morris Cooper S from 1965 to 1967, obtaining a best overall result of 6th and 3rd in class, together with Timo Mäkinen.

Paddy was representing Mini at the famous Bathurst race

7000-miles race from London to Sydney

In 1968, Paddy Hopkirk participated in the London - Sydney Marathon, driving a BMC Austin 1800. The race crossed the 7000-miles course over United Kingdom, France, Italy, Yugoslavia, Bulgaria, Turkey, Persia, Afghanistan, Pakistan, India and went by boat to Australia, where the competitors had another 2600 miles to race.

He saved lives, but lost the race

At the end of the penultimate stage, with only 98 miles to Sydney, the leading French crew Lucian Bianchi / Jean-Claude Ogier was involved in a head-on collision which wrecked their Citroën DS. Hopkirk and co-driver Tony Nash arrived first on the scene and stopped to pull the injured people out of the flaming car. With that heroic act, Hopkirk saved lives but lost the chance to win in the race. He finished second, behind Andrew Cowan.

Paddy and Tony Nash raced in one more marathon event – the 1970 London - Mexico World Cup Rally. They contested with the Triumph 2.5 PI and finished fourth. That year, Hopkirk retired from active racing after scoring one more podium at the Scottish Rally with Mini Clubman.

Seven years later he re-activated himself to race at the revived edition of the London – Sydney Marathon, this time driving a Citroen CX 2400, with co-driver Mike Taylor. They finished 3rd overall.

Winner in a classic events

Post-retirement, his active racing career was replaced with participation in various historic events where Paddy had a chance to show his skills and display his impressive speed a few more times. He won the RAC Golden 50, a historical anniversary race celebrating the 50th RAC Rally. He was driving a Mini Cooper with which Timo Mäkinen had won the 1965 Monte-Carlo Rally.

In 1990, he won the Pirelli Classic Marathon with co-driver Alec Poole. In 1994, he entered the Rallye Monte-Carlo again, driving a Rover Mini Cooper, with a registration number almost identical to the victorious 1964 Mini (L33 EJB).

The 77-year old Paddy has had the honour of being among the first inductees into the Rally Hall of Fame, when it was open in 2010 at the automobile and road museum Mobilia at Kangasala, Finland.

Video : The story about Paddy Hopkirk