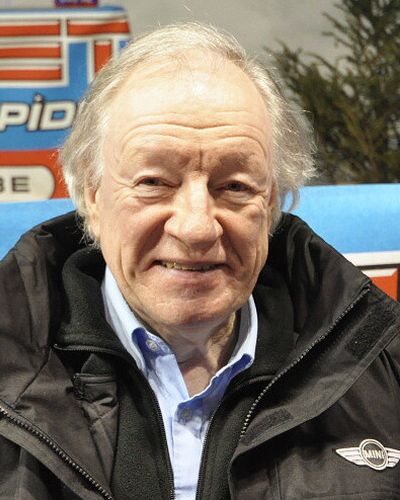 Rauno Aaltonen, also known as the Rally Professor, is a Finnish rally legend and one of the original 'Flying Finns' who started his career sixty years ago, in the late 1950s, but he is still active in the historic rally events. Aaltonen was the most successful during the 1960s, becoming two-time Finnish rally champion (1961, 1965) and European rally champion (in 1965). His most remembered victory was at the 1967 Rallye Monte Carlo with legendary Mini Cooper S.

Outside rallying, Aaltonen was also successful in other motorsports disciplines – circuit racing with cars and motorcycles, speedway and motocross. His greatest victory was at 1966 Gallaher 500 race (now Bathurst 1000) with Mini Cooper S.

Rauno August Aaltonen was born on January  7, 1938, in Turku on the southwest coast of Finland. The young Aaltonen was a diverse racer, having a career in the speed boat racing, motorcycle road racing, speedway and motocross. He even competed in the Grand Prix motorcycle races, becoming the first Finn who gained a victory.

Rauno's rally career started in the late 1950s. He entered the Jyväskylän Suurajot (later known as 1000 Lakes Rally or Rally Finland), for the first time in 1958. He was driving Saab 93 B and didn't finish the race. Next year, with the same car, he expanded his rallying activities to more events. Year by year, he was improving, reaching the top podium spot at 1000 Lakes Rally in 1961, driving the Mercedes-Benz 220 SE. In the same year, he became the Finnish rally champion for the first time.

Parallel to rallying career, he occasionally competed in circuit races, mostly in Finland, but it was also recorded that he entered one race in the 1961 German Formula 3 Championship.

In 1962, Morris Mini Cooper became one of the cars Rauno was using. With that car, he entered the Rallye Monte Carlo for the first time, alongside navigator Geoffrey Mabbs. The race ended with a fiery accident in which Rauno almost lost his life.

Other cars which Aaltonen was using in that period were Saab 96, Austin Healey 3000, MG 1100... In that time, there was no world championship established, so the European Rally Championship was the top competition.

He was victorious in many other events instead, clinching both European and Finnish rally championship titles in 1965. Among other wins, he won at British RAC Rally and Rajd Polski. At Rally of 1000 Lakes, he was third.

Battle of Minis at Mount Panorama

The season 1966 was marked by a controversial exclusion of all Mini crews at Rallye Monte Carlo. In that year, Aaltonen gained his biggest non-rallying success on the other side of the world, at Australia's Mount Panorama Circuit in Bathurst.

Together with Bob Holden, Aaltonen won the Gallaher 500, the biggest Australian endurance race which later became the Bathurst 1000.

In those years, Aaltonen was a regular competitor (mostly with with Mini) at some world famous road and circuit races, such were Targa Florio, Tour de France or Sebring 12 hours. One more notable result was the second place overall at 1964 24h Spa, where he was sharing the BMW 1800 Ti with Hubert Hahne.

In June 1965, Aaltonen debuted at 24 hours of Le Mans. He was sharing the #48 Austin-Healey Sebring Sprite with Clive Baker. They retired after a gearbox failure.

And then, in January 1967, the victory came which marked Aaltonen's career. The #177 BMC Mini Cooper S, driven by Aaltonen with a help of navigator Henry Liddon, was among front-runners, battling against Ove Andersson in the Lancia Fulvia HF and Vic Elford in the Porsche 911 S. After a dramatic last stage, on which Aaltonen had some off-road driving, he won with five-second advantage over Andersson.

The rest of the season wasn't so good, so Aaltonen wasn't well placed in the ERC standings. One more podium at Rallye Monte-Carlo followed in 1968 when he finished third behind two Porsches of Vic Elford and Pauli Toivonen.

In November and December 1968, Aaltonen participated in the 1st London – Sydney Marathon, driving the BMC 1800 MkII, as a teammate to Paddy Hopkirk. Aaltonen finished in the fifth place. It was Rauno's last race for British Leyland Cars, next year he joined HF Squadra Corse Lancia.

With Lancia, Aaltonen participated not only in rallies but also in the 1000 km of Nurburgring and at Targa Florio, driving the Lancia Fulvia F&M Special and sharing the car with Sandro Munari.

A season with Ford in rallying and BSCC

One more change of the manufacturer followed in 1970 when Aaltonen was driving for Ford at some notable rally events but also in the British Saloon Car Championship.

The highlight of the year was Aaltonen's third place at London – Mexico World Cup Rally. He was driving the Ford Escort Twin Cam alongside his longstanding partner Henry Liddon.

For the last event in 1970, it was the RAC Rally, Aaltonen joined Nissan Datsun to drive Datsun 240Z. He continued to compete with that car in 1971, entering few events of the International Championship for Manufacturers. One of the events was Rallye Monte Carlo, where he finished in the seventh place.

In 1972, Aaltonen returned to Rallye Monte Carlo with Jean Todt as a co-driver in the #5 Datsun 240Z. They finished third overall, behind Sandro Munari (Lancia) and Gerard Larrousse (Porsche).

During 1972, Aaltonen was also driving Citroen SM Maserati and BMW 2002 Ti in few events. He continued that way in 1973, changing three manufacturers during the first season of the World Rally Championship. He was driving Datsun 240Z, Fiat 124 Abarth and Opel Ascona.

In May 1973, at Acropolis Rally, Rauno Aaltonen and Robin Turvey finished second in the #12 Fiat 124 Abarth, behind Jean-Luc Therier in the Alpine-Renault A110 1800.

After many international wins, it was officially the first WRC podium for Aaltonen. Later in a career, he scored five more WRC podiums but never scored a WRC victory. All five podiums he reached at Safari Rally, one of the most demanding events in a WRC calendar.

There was some special connection between Rauno Aaltonen and Safari Rally. Many European drivers were skipping that event but Aaltonen was a regular competitor there from 1967 to 1987. The 1987 Safari rally was his last WRC event.

In twenty years of his African adventure, Aaltonen participated at Kenyan event with thirteen different cars from five different manufacturers. He scored his first podium in 1977, driving the Datsun 160J alongside Lofty Drews and finishing second behind Bjorn Waldegard. Aaltonen and Drews added two more podiums using the same car in 1978 (third) and 1980 (second). In 1981, they were second with Datsun Violet GT.

The last podium for Aaltonen and Drews came in 1984, with Opel Manta 400. They finished second for the fourth time, Bjorn Waldegard was the winner again. Aaltonen's last WRC event was the 1987 Safari Rally with Opel Kadett GSI when he finished ninth.

At Rallye Monte Carlo, Aaltonen participated for the last time in 1981, driving the Datsun Violet GT and finishing 13th overall.

Professor has a school for driving on ice and snow

After leaving professional rallying, at the age 49, Aaltonen participated at some historic rallying events, such were Legend Boucles de Spa or Goodwood Rally Stage. He returned to the Mount Panorama race track one more time in 1991, reuniting with Bob Holden at Bathurst 1000. They were driving Toyota Corolla.

In recent years Aaltonen's focus was, according to his nickname (Rally Professor) on teaching the people how to drive on ice and snow, and how to race successfully. Together with his son Tino, Rauno is running the Aaltonen Motorsport, the company which organizes various driving events and trainings. When competing, Aaltonen was one of the first proponet of the left-foot braking, the revolutionary technique which is today a must-know technique to be a successful rally driver.