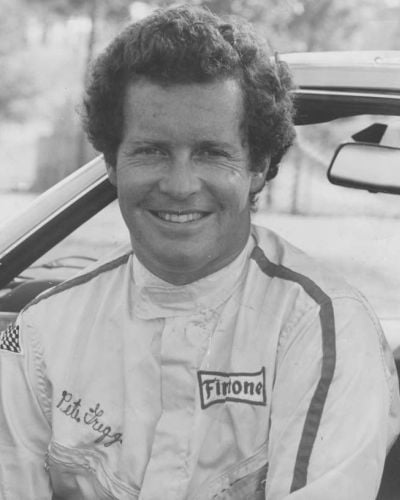 Peter Holden Gregg was an American racing driver and also the owner of the Brumos Racing team. As a four-time winner, he is one of the most successful drivers in the history of Daytona 24 Hours race.

Harvard student and US Army officer

He was born on May 4, 1940, in New York City and during his high-school days, Gregg began to compete in gymkhana racing. While he was a student at Harvard, Peter started to compete in hill climb events and later joined the US Army as an Air Intelligence Officer. In 1963, he attended the Scuderia Centro Sud Racing School in Italy and that was a moment when he definitely decided that cars and racing will be his main occupation.

He left the Army in 1965 and settled in Jacksonville, Florida. Gregg bought the local Porsche dealership after the death of the owner and in 1971, he formed the famous Brumos Racing team. In the meantime, he competed with a considerable success in amateur categories. Peter was 1967 SCCA’s Southeastern Division champion, two years later he scored six wins in Trans-Am Series and also became SCCA Sedan National champion.

Behind a wheel of Brumos Porsche

He was quite successful as a businessman, too. In 1968, he acquired a Mercedes-Benz dealership, while two years later he opened another dealership, selling MG and Fiat cars.

Ready for a higher level

In 1971, the new competition was formed – IMSA. Behind the steering wheel of the Porsche 914 alongside Hurley Haywood, Gregg won the very first race of the new championship. They also won two races en route to the IMSA GT title. That was the beginning of the very successful career. During his career Peter won many titles and races, including two Trans-Am championships in 1973 and 1974.

With Hurley Haywood after winning the Daytona 24h

However, Gregg is best remembered for his achievements in the IMSA. In 1973, he won Daytona 24 Hours for the first time, driving Porsche Carrera RSR alongside Haywood. They also won Sebring 12 Hours before winning another IMSA title. The New York-born was again the IMSA champion in 1974 and again won the Daytona 24 Hours in 1975.

After his excellent performances, Gregg earned a nickname ’Peter Perfect’. The stream of successes continued in 1976 when he triumphed in Daytona 24 Hours for the third time. That year he shared a seat of BMW 3.0 CSL with Brian Redman and John Fitzpatrick. The event was stopped for nearly three hours when a bad fuel began to plague the cars.

Winner of the 1976 Daytona 24h behind the wheel of BMW

Next year, Gregg was Trans-Am Series runner-up with the Porsche 934 and finished third in a class at Le Mans 24 Hours, driving the JMS Racing Team’s Porsche 935. In 1978, he won the Daytona 24 Hours for the fourth and the last time, behind a wheel of Brumos’ Porsche 935. His co-drivers that year were Rolf Stommelen and Toine Hezemans. Like in the previous year, Peter was again 3rd at Le Mans, this time in the seat of Martini Porsche 936. He also defended his IMSA title in 1978 and won it again in 1979.

The season of 1980 probably was the worst in Gregg’s career. He failed to win a single race and was also unable to drive in Le Mans 24h after having a traffic accident near Paris and he wasn't able to race.

In the seat of Martini Porsche at Le Mans

In December of 1980, he married for the second time. Even though it was clear that his career is not moving in the right direction, especially after he was diagnosed with diplopia, Gregg was considered as one of the greatest and most successful road racers in the US, with 152 wins out of 340 races he has started.

Just nine days after the wedding, he committed a suicide. His body was found at the beach near his house in Florida, with a suicide note and revolver. Fame, fortune, wealth, and success obviously weren’t enough for him.

The legacy of Peter Gregg

Gregg was an art lover and the owner of the only BMW Art Car not owned by the factory. Deborah, Peter’s widow and a racer herself, sold the car in 1990. The car was later donated to the Guggenheim Museum and in 2011 sold at the Bonhams auction for $854.000.

Deborah Gregg also took over the Brumos Racing, with a help of Hurley Haywood, but in the mid-1990s she sold the dealerships when she remarried. His son, Simon, later competed as a driver in Trans-Am, the American Le Mans Series, and the Grand-Am Series with a considerable success.