Force India, or Sahara Force India what is the current full name of the team, is an Indian Formula 1 team, based at the Silverstone Circuit, UK.

The team was formed in the autumn of 2007 by a consortium led by controversial Indian businessman Vijay Mallya and Dutch businessman Michiel Mol. They bought Spyker F1, the team which existed under many names since 1991, for around 90 million euros and already in 2008 Force India was able to compete in the FIA Formula1 World Championship. 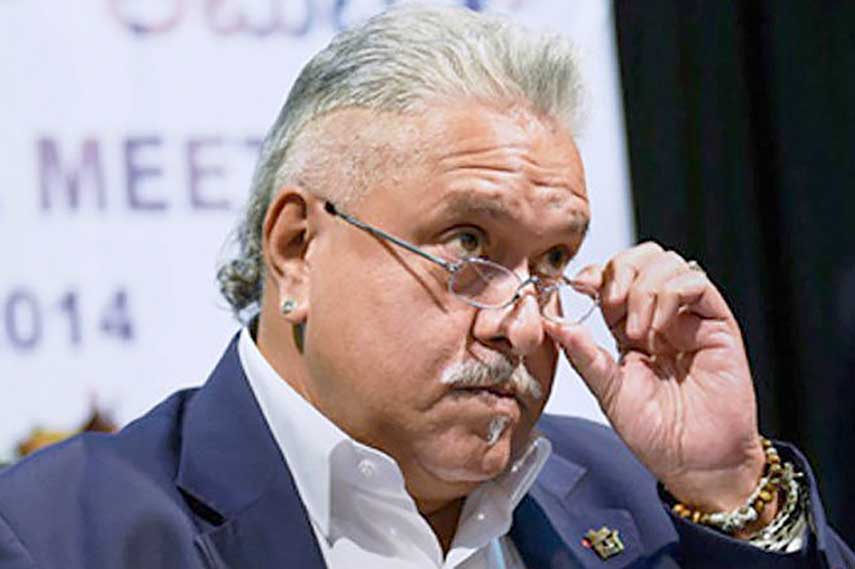 Force India was ready for quick debut in the most popular racing competition as inherited the entire infrastructure of Spyker F1 team. Adrian Sutil remained with the team as a first driver while experienced Giancarlo Fisichella filled the second seat. Unfortunately, the old car which was powered by Ferrari engine and had only minor updates comparing to the previous year. wasn’t competitive enough. Sutil and Fisichella couldn’t win a single point and the 10th place of the Italian driver at Catalunya Circuit was the best result. 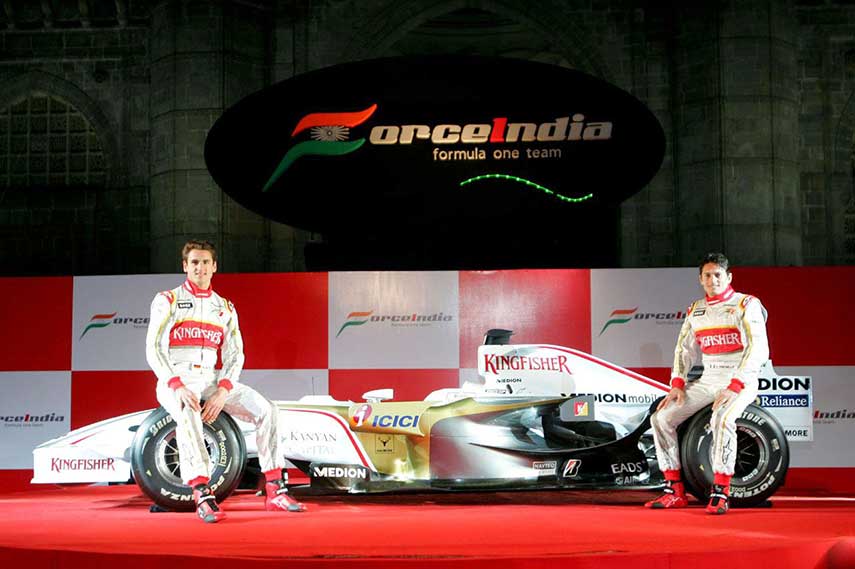 The following year was a significant step forward as the team scored not only the first points but also the first podium. Team has switched from Ferrari to Mercedes engines what proved to be a good decision. The pair of pilots remained unchanged but the first half of the season wasn’t a good one. Both Sutil and Fisichella couldn’t score points and they best result was 9th place. However, the Italian surprised many when he finished 2nd, less than a second behind Kimi Raikkonen, in Belgian Grand Prix at Spa after he has started from pole position. 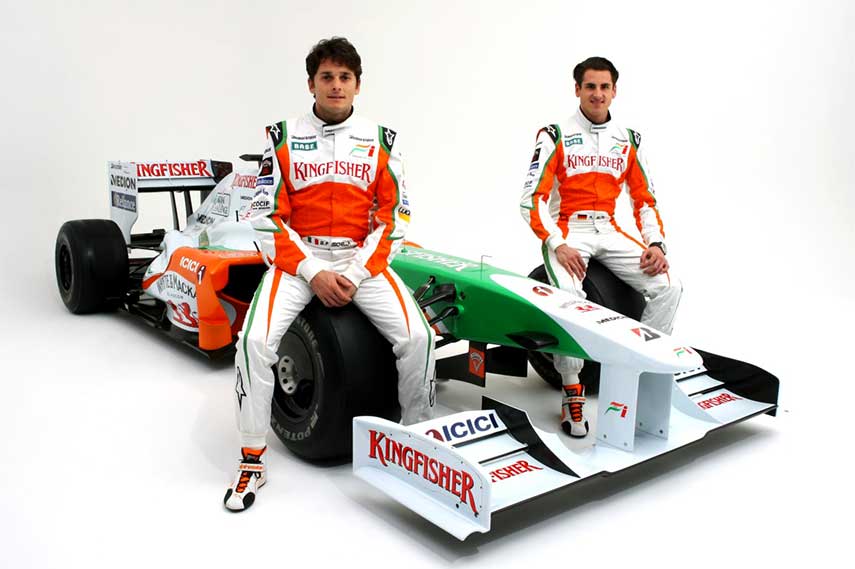 Fisichella left the team after that race and moved to Ferrari. He was replaced with the reserve pilot Vitantonio Liuzzi. Fisichella’s departure didn’t affect team a lot. In the following race, the Italian Grand Prix at Monza, Sutil finished 4th after he was 2nd in qualifying. At the end of the campaign, Force India finished 9th in the Constructors’ championship with 13 points.

Progress has continued in 2010

The Force India team now had more confidence and experience, and a solid foundation for further progress. Sutil and Liuzzi were confirmed as the pilots for the 2010 campaign while Paul Di Resta arrived to be a test and reserve driver. The new VJM03 car proved to be more competitive and the results could be seen even in the season’s opening race when Liuzzi finished 9th and earned two points. 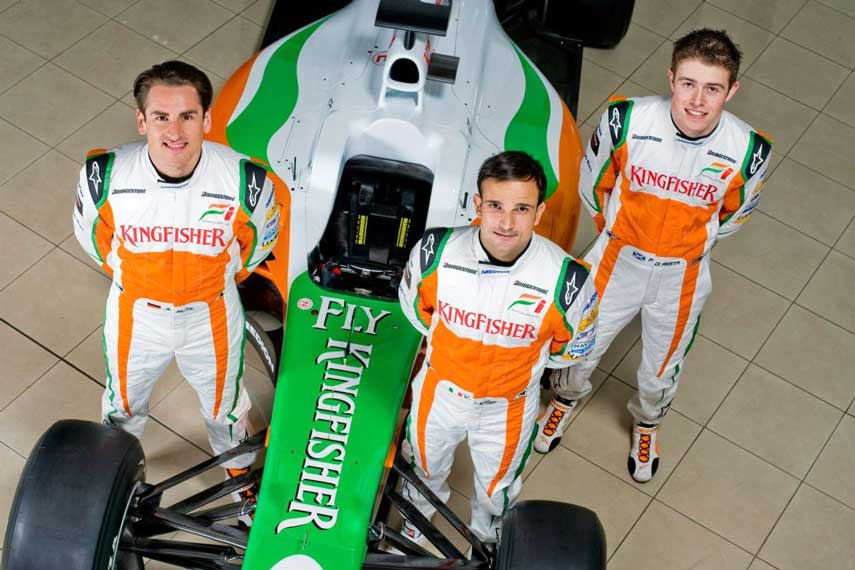 Over the season Force India drivers failed to score points in just five races. Sutil was in more consistent form and collected more points than his teammate. His best results were 5th positions at Sepang and Spa while Sutil’s best performance was in Singapore – 6th place. Finally, the team moved up to 7th in the Constructors’ championship with 69 points.

Many changes for the 2011 F1 campaign

The new season brought some new faces to the team. Andrew Green became new technical director while Di Resta was promoted to the race driver instead of Liuzzi. Both pilots, with a bit of luck, scored points in the season’s opening race in Australia what was an encouragement for the rest of the campaign.

The season of 2011 was pretty similar to the previous one in the terms of results. Both racers were solid but more experienced Sutil collected more points than the Scot. The best result of both drivers was a 6th place (Di Resta in Singapore, Sutil in Germany and Brazil) and the team also finished 6th in the championship with 69 points, ahead of teams like Renault, Williams or Toro Rosso.

With a new VJM05 car, Force India entered the season of 2012 with a moderate optimism. The drivers line-up again was changed after Sutil was replaced with a reserve driver from the previous season Nico Hulkenberg. Talented Jules Bianchi from Ferrari got the role of test and reserve driver. The start of the season was relatively good but some problems occurred before the 4th race of the season in Bahrain. Force India wanted to withdraw from the race because of the revolution in the Middle-Eastern country. However, team’s officials confronted to F1 boss Bernie Ecclestone who threatened to punish the team if not take a part in the race. At the end, Force India entered the race and Paul Di Resta finished 6th. 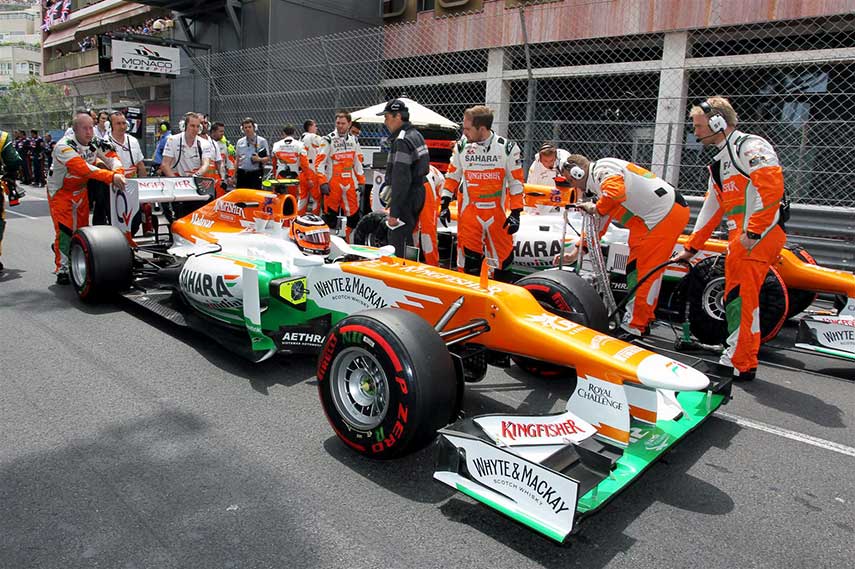 Di Resta and Hulkenberg missed points finish only in two races that year. Force India had 109 points in his books at the end of the campaign but was enough only for the 7th place in the Constructors’ championship. Even after they failed to secure a podium finish in any of 20 races both drivers did a good job. Paul’s best result was the 4th place in the German Grand Prix while Nico finished 4th in Belgium.

Interestingly, in 2013 Force India scored 32 points less than in the previous year, but moved up to 6th place in the championship. Paul Di Resta stayed with the team for the third season and was accompanied with Adrian Sutil who returned to the team after a one-year absence. 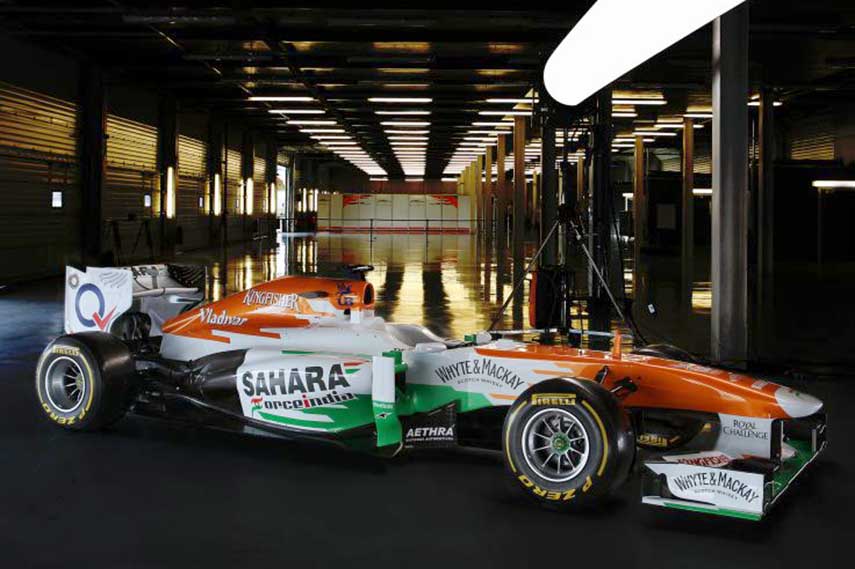 Di Resta did a much better job than his teammate, especially in the first half of the season when he collected points on a regular basis. His best result again was the 4th place, this time in Bahrain, while Sutil impressed in Monaco finishing 5th.

The following season brought another shuffle in the drivers line-up. Nico Hulkenberg returned to the team while Di Resta was replaced with a Mexican hot prospect Sergio Perez. During 2014 Force India collected a record number of points (155) but still couldn’t finish better than 5th in the Constructors’ championship. 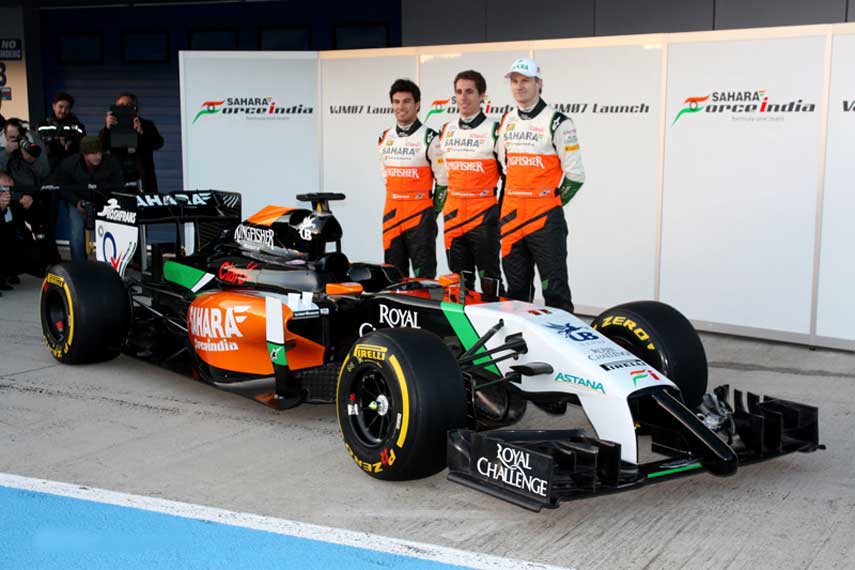 However, that season was a good one for the team which showed what can be done with a relatively tight budget. Perez’s arrival proved to be an excellent move as he finished 3rd in the Bahrain Grand Prix and picked points in 11 other races. Hulkenberg also did well. The German scored in the opening 10 races and later on five other occasions but couldn’t go further than the 5th place, the result he achieved in four races that year.

The start of 2015 wasn’t a good one. The team retained services of Hulkenberg and Perez but struggled with a preparation of the new VJM08 car. It wasn’t a surprise when both Nico and Sergio couldn’t fulfill expectations in the first part of the year. 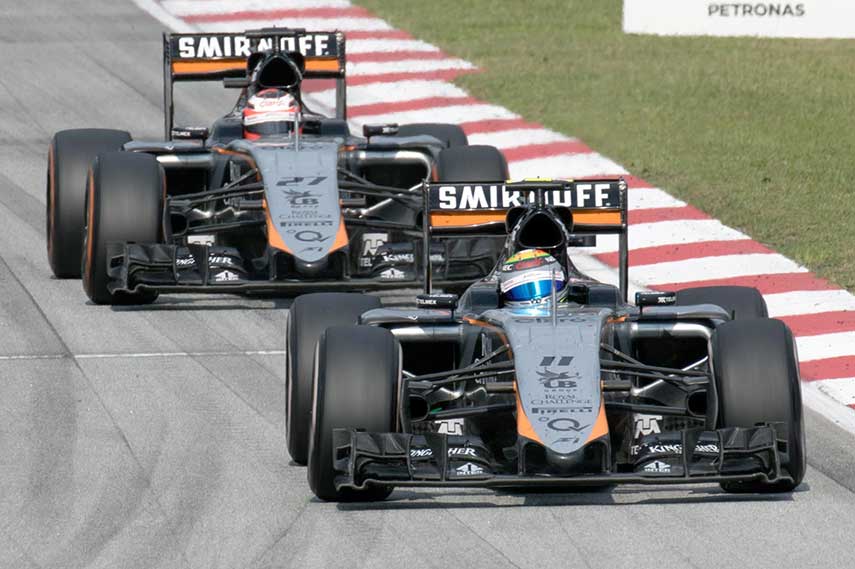 Fortunately, the things improved with a new VJM08B car which was introduced in the British Grand Prix at Silverstone, the team’s base. Both drivers scored points in that race what was a springboard for the second half of campaign. And again Perez was the one who impressed more as he scored another podium. With 136 points, Force India finished 5th in the championship what is the best result in the team’s history.

Those results weren’t unnoticed and Force India became a very desirable bride. Many well-known names and brands became interested in buying the team in 2016, with Aston Martin mentioned as the main candidate, but the whole story ended as a speculation. Vijay Mallya confirmed that he has negotiations with some interested buyers but the Indian businessman is obviously waiting for the best groom for his cosset.