The Porsche 907 was a prototype sports car built by Porsche during 1967 and 1968 and the first Porsche car that won Daytona 24 Hours race.

This racing car was revolutionary in design, with a completely new long tail body, designed specifically for endurance events. This car probably looked like a bit out of proportion because of the unusual fighter plane looking roof of the cockpit. That’s why the height of the car was a bit bigger than it has needed to be. The low-drag body was reduced comparing to its predecessor Porsche 910. The position of the driver seat was moved to the right what was supposed to be an advantage on the clockwise run circuits. 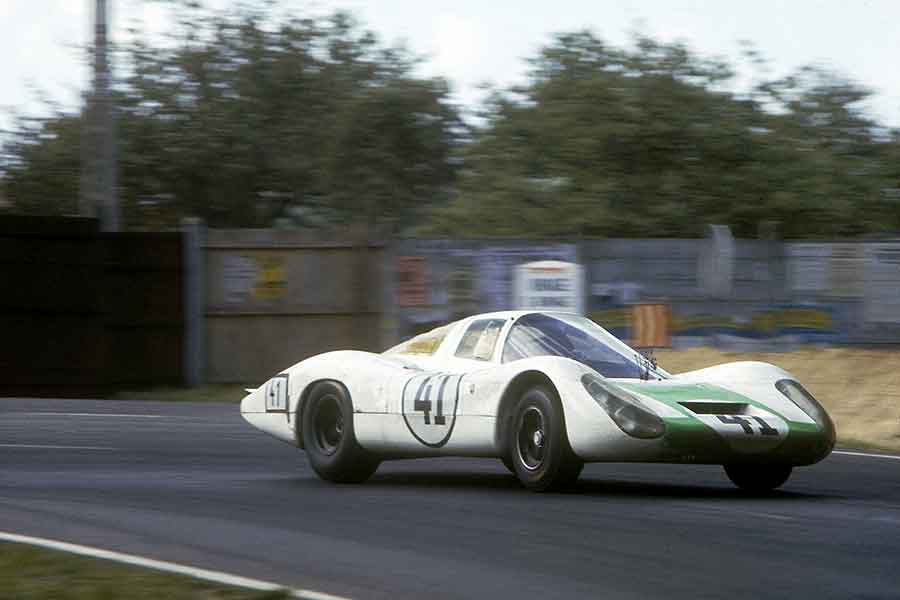 The design approach was revolutionary but the body of the car was built around the chassis pretty similar to the one used fro Porsche 910. Steel tubular monocoque was light, the suspension was quite conventional while the engine was, probably a bit surprisingly, a V6 engine which was more reliable than the V8 2.2-liter engine that was used in 1968 and produced 278 horsepower. Even with the less powerful engine, Porsche 907 was able to reach the speed over 300 km/h at Mulsanne Straight.

The new car was presented in the 1967 Le Mans 24h test. The engineers weren’t happy after Porsche 907 was unstable at speed, the rear wing had to be modified and there were many more small things that had to be developed. Porsche fielded two cars in the race. The first car #40, with Jochen Rindt and Gerhard Mitter as drivers, retired after six hours due to an engine failure. The second car #41, driven by Hans Herrmann and Jo Siffert finished 5th, behind two Fords and two Ferraris. 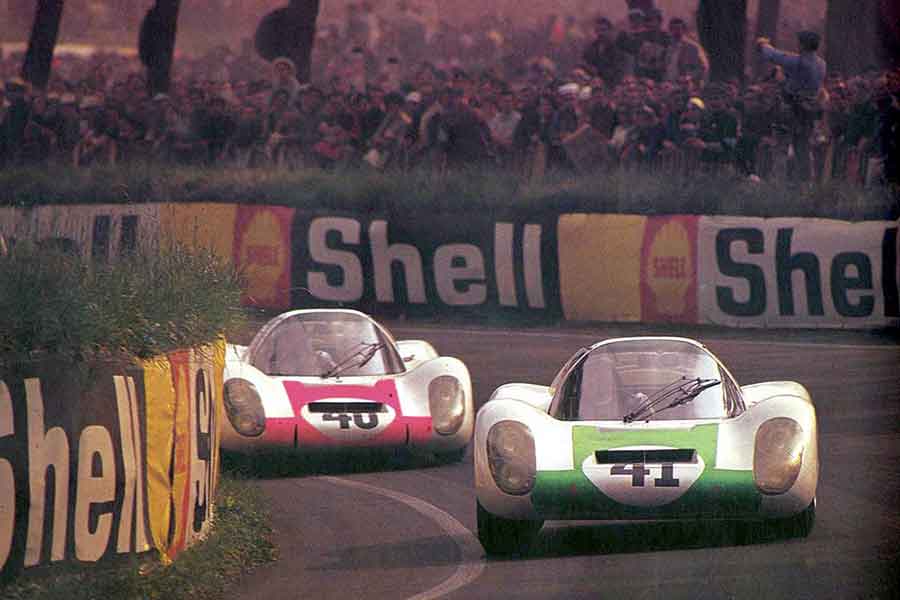 The Porsche 907 raced just once more in 1967 and finished 4th at Brands Hatch 6 Hours, driven by Jochen Neerspach and Hans Herrmann.

The regulations changed in 1968 and Porsche had an advantage to Ford and Ferrari who previously used big and more powerful V8 and V12 engines. Italian manufacturer wasn’t able to prepare the car under new regulations and sat out the whole campaign. Porsche’s appetite grew and was resolute to win World Sportscar Championship and to triumph at Le Mans. 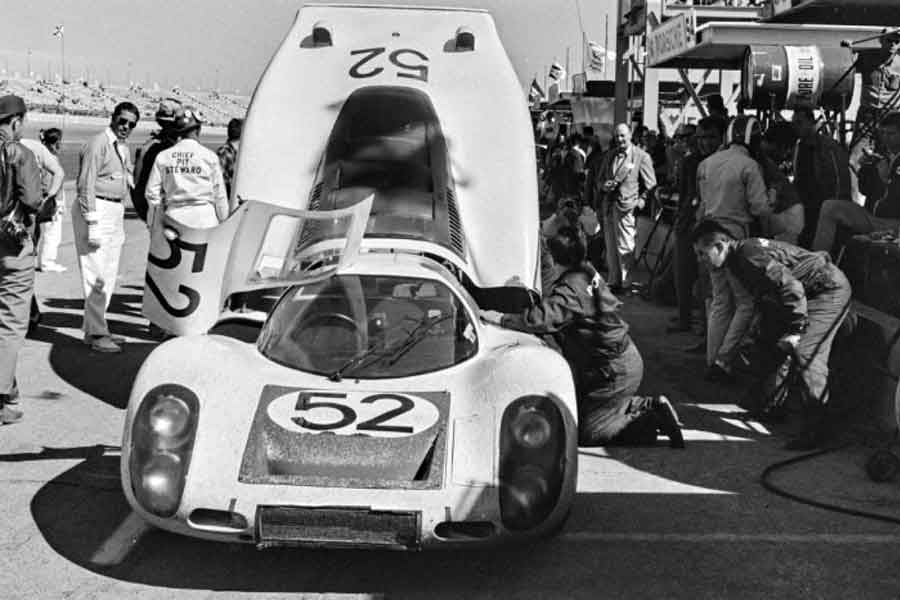 Porsche fielded no less than four Porsche 907L cars at Daytona 24 Hours. Equipped with the new flat engines and with a couple of small changes in design, modified 907 was lighter and ready to conquer tracks worldwide. At Daytona, one of the cars crashed while was leading the race, while the other three impressed with 1-2-3 finish what was Porsche’s first victory at Daytona and also maiden win in any 24-hour race. Drivers of the winning car were Vic Elford, Jochen Neerspach, Rolf Stommelen, Jo Siffert, and Hans Herrmann.

The next success was a victory at Sebring 12 Hours, with Siffert and Herrmann sharing the seat of Porsche 907, while later in the year Vic Elford and Umberto Maglioli triumphed in notorious Targa Florio race. That was the last big win for Porsche 907 as it was replaced with a new 3-liter Porsche 908. 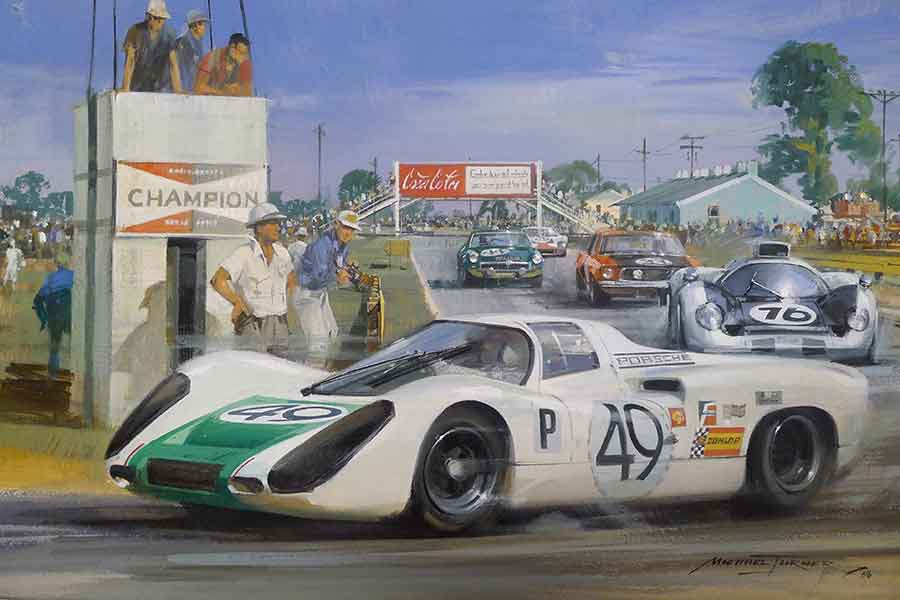 However, 907 continued its life for a while. After Porsche factory team began to race with 908s, remaining 907s were used by private teams. In 1968 Le Mans 24 Hours, Porsche 907 prepared by Squadra Tartaruga finished 2nd in the race, a lap ahead of 908 run by the factory team. Some private teams continued to use Porsche 907 until 1971, occasionally scoring notable results, like podium finish in 1000 km of Monza in 1969 and 7th place at the 1971 Le Mans 24 Hours.