Supercars: Scott McLaughlin is back to the winning rhythm

After not winning two races in a row, the defending Supercars champion Scott McLaughlin (DJR Team Penske) continued his domination in the 2019 Virgin Australia Supercars Championship by sweeping the second race of the Ipswich SuperSprint at the Queensland Raceway.

McLaughlin started from pole in the #17 Shell V-Power Ford Mustang, set the fastest lap and won the race. It was his 13th pole position and 14th victory in twenty races of the season, making him a step closer to the back-to-back Supercars title.

Thanks to his fantastic performance, Ford already secures Manufacturers’ Championship title. McLaughlin was celebrating that achievement on a podium with a poster, receiving a $10,000 fine for taking a “non-permitted item” onto the podium. Before that, he gets a penalty of $3,000 for breaching end of race procedures with his burnout. Scott McLaughlin at the finish line

In the race, Scott McLaughlin McLaughlin led fr all 65 laps. However, he had to hold off a charging Shane van Gisbergen (Triple Eight Race Engineering) in a thrilling finish, crossing the finish line just 0.7 seconds ahead of another Kiwi in the #97 Red Bull Holden Commodore. Tickford Racing’s Chaz Mostert finished in the third place for the second consecutive race in the #55 Supercheap Auto Racing Ford Mustang.

After twenty races, McLaughlin leads the championship standings by 433 points ahead of teammate Fabian Coulthard, who finished just 18th in Sunday’s race. Shane van Gisbergen is third in the standings, 87 points behind Coulthard and twenty points in front of Mostert. 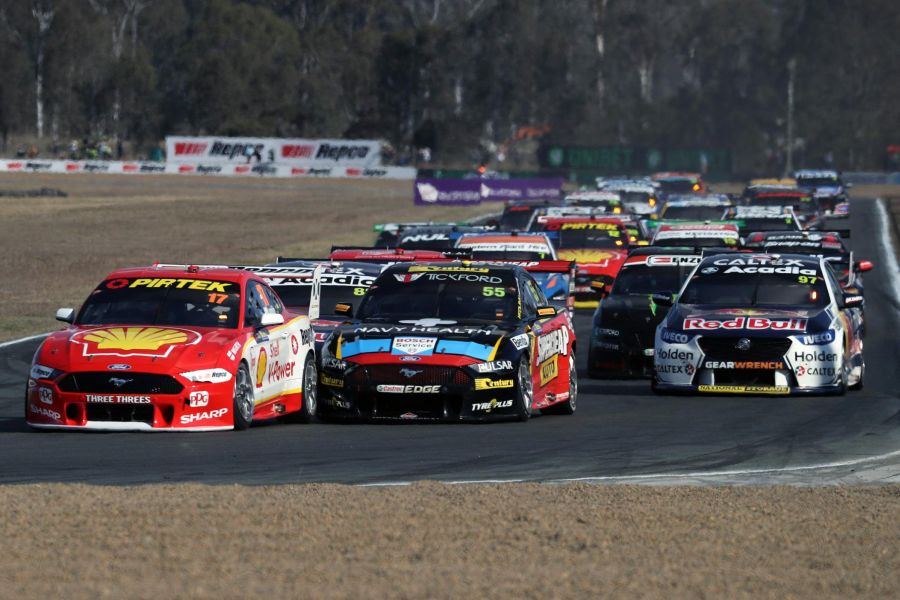 Check the results of the Ipswich SuperSprint