The evolution of Andretti Autosport

The team was founded in 1993 by Barry Greene and Gerald Forsythe and competed under the name Forsythe-Green Racing. Michael Andretti had purchased majority interest in the team in 2003. He restructured the team and renamed it to Andretti Autosport in 2009.

Formula Atlantic Championship was the first in which the new team entered, while in the following season switched to the CART Series with Jacques Villeneuve as a driver. The rookie did very well and won the race at Road America and also finished 2nd in Indianapolis 500. 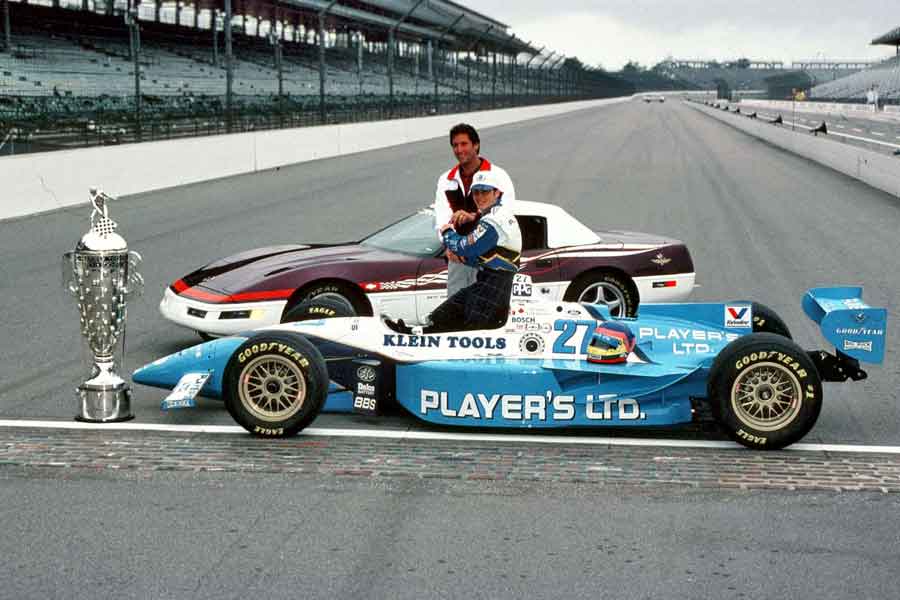 After Forsythe and Green parted ways, in 1995 team began to race under the name Team Green. That year was very fruitful after Villeneuve won the Drivers’ championship and also triumphed at Indy 500 before making a move to Formula 1.

The following two years weren’t successful. Raul Boesel and Parker Johnstone were unable to achieve notable results, but the situation became better in 1998 when the team expanded its involvement in the CART Series to two cars. With KOOL as a major sponsor, and with two new drivers – Dario Franchitti and Paul Tracy – team have returned to the winning path. 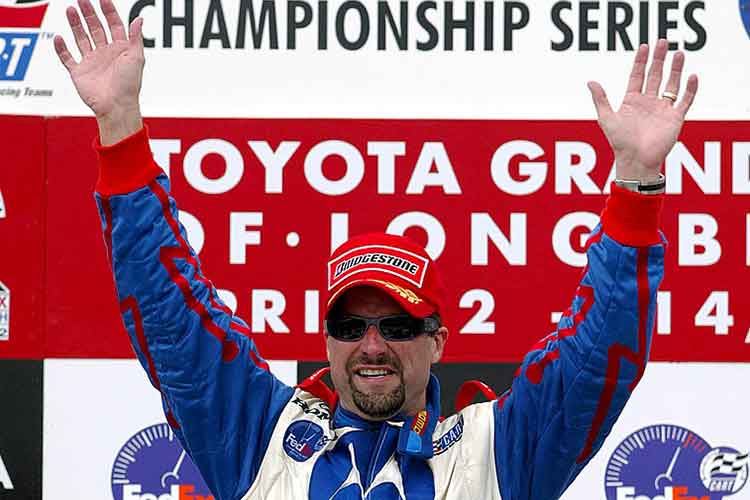 The two were teammates for five years and the did pretty good job. Franchitti proved why he is considered as one the rising stars as he scored wins each year, except in 2000. In 2001 operations expanded to three cars after Michael Andretti joined the team. The same year team scored its second triumph at Indy 500 after Tracy won the race. In 2002 at Long Beach, Michael Andretti won his last race as a driver. At the same moment, Team Green has been preparing for another change.

In 2003, Michael Andretti purchased the majority of the team, renamed it to Andretti Green Racing, and due to the troubles in the CART Series, switched it to the rival IndyCar Series. Tony Kanaan was the team’s leading driver that year, while Michael Andretti retired after Indy 500 and was replaced by Dan Wheldon.

The following season was one of the best in team’s history. Andretti Green Racing fielded four cars with Kanaan, Wheldon, Franchitti, and Bryan Herta as the drivers, and only the latter one failed to win the race that year. Kanaan won the title after being triumphant at Indianapolis and setting a record by completing all 3.305 possible laps, the first IndyCar driver in modern history to do so, while Wheldon finished as a runner-up.

The same driver line-up was in 2005 and again it was a very fine season after each pilot won at least one race. Now Wheldon was the one who conquered Indy 500 before taking the championship title, Kanaan was a vice-champion, while Franchitti finished 4th in the standings. 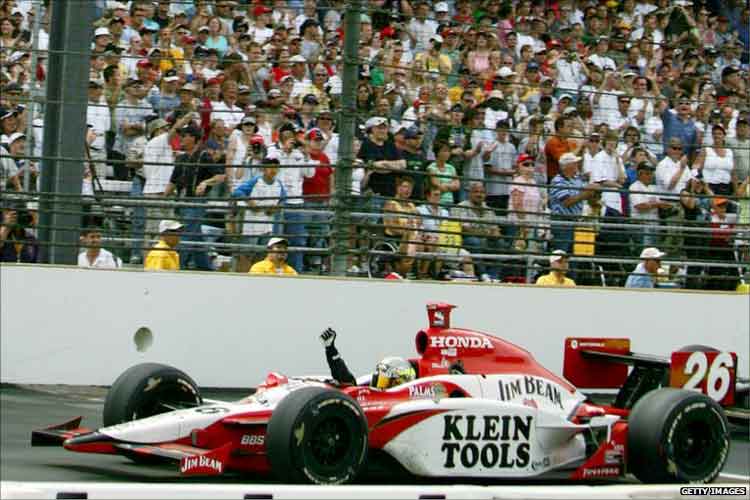 When Wheldon left the team in 2006, he was replaced with Marco Andretti who managed to win the race at Sonoma Raceway. The only other victory that year was scored by Kanaan at Milwaukee, while Michael Andretti finished 3rd at Indy 500 in his one-off appearance.

After unconvincing 2006 season, the team bounced back in 2007 when Dario Franchitti became a champion. For the first time in his career, British driver triumphed at Indy 500, scored other three wins and had numerous top 3 finishes before winning tight championship battle with Scott Dixon. Kanaan also scored four wins that year before finishing 3rd overall, while Danica Patrick was 7th in the standings after having three podiums and numerous strong finishes. 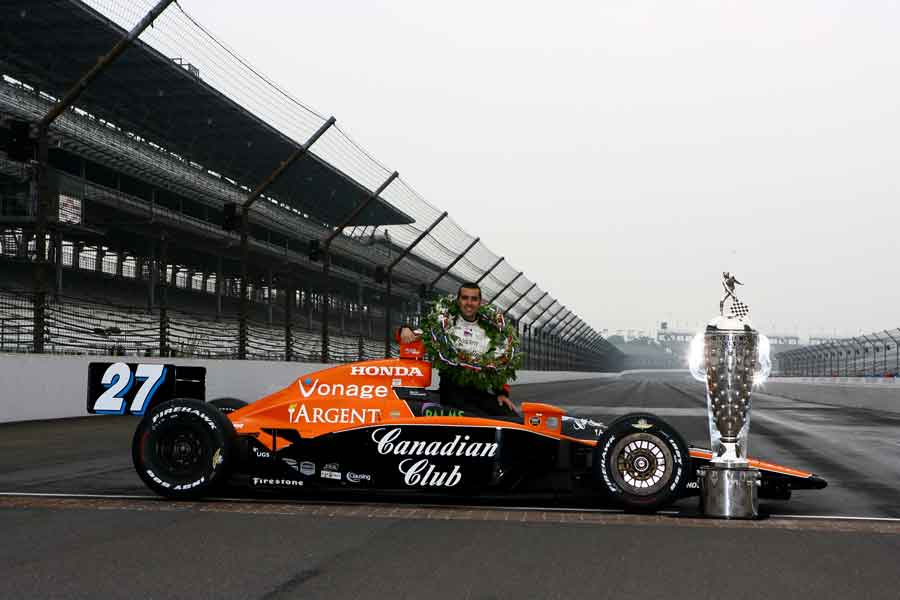 In 2008, Japanese Hideki Mutoh joined Tony Kanaan, Danica Patrick, and Marco Andretti as a driver and was named Rookie of the Year. However, the results weren’t as good as in the previous season but Kanaan again was among the best and finished the season at the 3rd position.

The same line-up was in 2009 but that year was one to forget. For the first time since 2003, the team failed to win the race. Danica Patrick was leading figure as she finished 5th in the championship. It was obvious that team is in the crisis but soon new energy will shake up the situation.

Since 2009 team’s name is Andretti Autosport

Late in 2009 team was restructured and Michael Andretti became the sole owner and changed the name to Andretti Autosport. For the squad that carries such a great name, all but a win would be a failure. The arrival of Ryan Hunter-Reay was fresh blood and he scored first win for the team in IndyCar Series since 2008. Kanaan scored another win at Iowa what was a solid achievement for the new beginning. Experienced Brazilian Kanaan left the team in 2011 and was replaced by the British racer Mike Conway. He won the Long Beach Grand Prix, Marco Andretti triumphed at Iowa, and Hunter-Reay triumphed at New Hampshire. Danica Patrick was the team’s only driver who failed to win the race that year, her final with Andretti Autosport.

Hunter-Reay joined the club of champions

A bit unexpectedly, the Andretti Autosport was running only three cars in 2012 after departure of Danica Patrick, while Conway wasn’t brought back. James Hinchcliffe joined the team and had a solid campaign. Andretti Motorsport changed the engine supplier that year and was running Chevrolet-powered cars what proved to be a good decision after Ryan Hunter-Reay became new IndyCar Series champion.

He won three consecutive races in the middle of the season (Milwaukee, Iowa, Toronto) and later added a triumph at Baltimore what was enough to win the title, only three points ahead of Will Power. 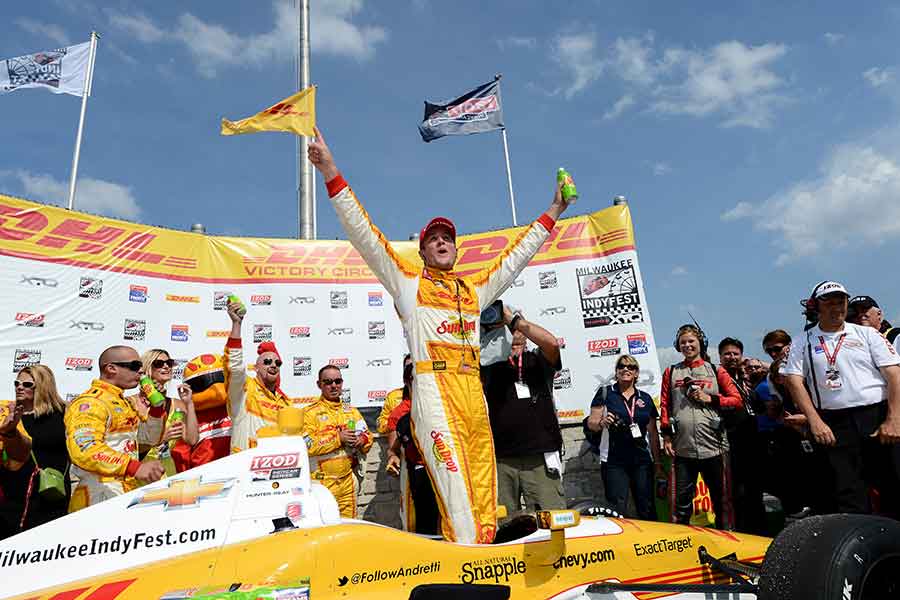 In 2013, Hunter-Reay failed in an attempt to defend the title. He finished 7th in the standings, while Marco Andretti was team’s leading driver that season. The son of team owner finished 5th overall although not recording a victory.

Carlos Munoz joined Hunter-Reay, Andretti, and Hinchcliffe as a full-time driver in 2014. The Colombian did fine as he finished 8th overall and won Rookie of the Year Award. Hunter-Reay was the team’s best pilot that year with three wins on his account, including the triumph at Indianapolis.

The season of 2015 was a small step backward. Hunter-Reay again was team’s leading driver as he finished 6th overall with two race wins on his account, while Munoz won once. Only three cars were fielded for full-season, while Simona De Silvestro and Justin Wilson each joined for races throughout the season. Sadly, Wilson was killed in an accident during the race at Pocono.

In 2016, a single victory was the one scored by the newcomer Alexander Rossi. Former Formula 1 driver was triumphant at Indy 500 and deserved Rookie of the Year award. The other three drivers did somewhat below the expectations, especially Andretti who had just three Top 10 finishes.

In 2017, Takuma Sato triumphed at Indianapolis 500, bringing the third Indy 500 victory to the team in four years and the fifth win in team’s history.

Present in Indy Lights since 2008

In its first year in the Indy Lights Series, Andretti Green Racing with AFS Racing was able to win the Teams’ Championship title, while Raphael Matos became the Drivers’ champions. The title was defended in the following campaign when the drivers were JR Hildebrand, who also won the Drivers’ title, and Sebastian Saavedra, who finished 3rd in the standings. 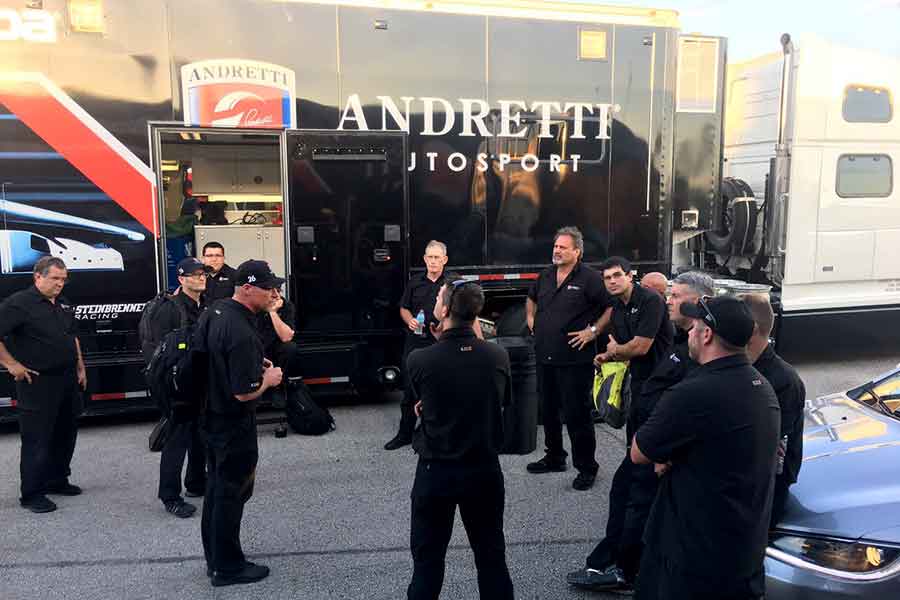 Charlie Kimball and Martin Plowman were engaged as the drivers in 2010, and they finished 4th and 3rd respectively what wasn’t enough for another Teams’ title. Despite regularly having drivers among the frontrunners, Andretti Autosport is still waiting for its third Teams’ title

FIA Formula E is another Andretti’s area of interest

Andretti Autosport is present in the FIA Formula E World Championship since the first day. Even after this competition not being the team’s priority, some notable results were scored from 2014. Interestingly, during the first campaign of the series, no less than eight drivers raced for the team that scored four podiums – two by Jean-Eric Vergne, and one by Franck Montagny and Scott Speed. 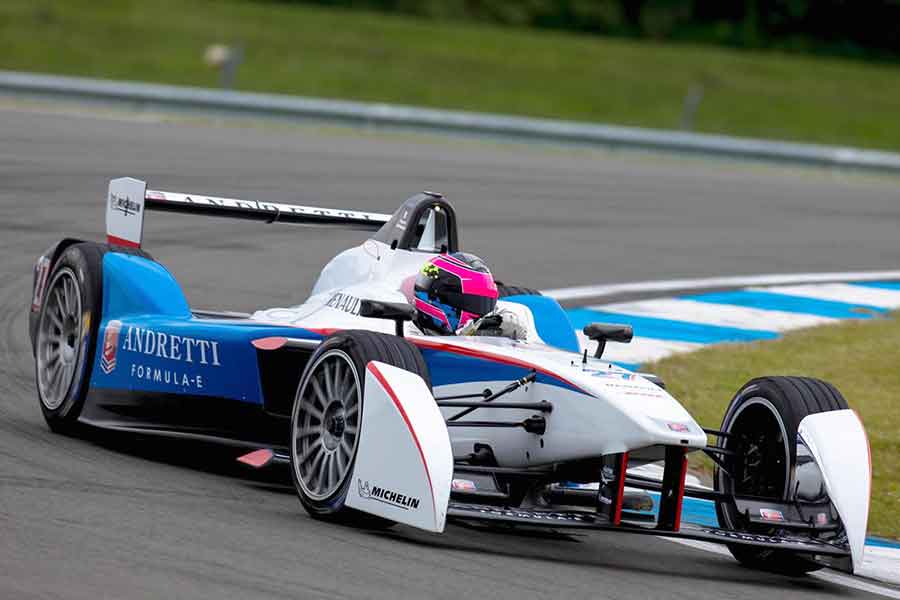 After finishing 6th in the first season, Andretti Autosport dropped to the 7th position in a 2015-2016 season when drivers were Robin Frijns and Simona De Silvestro. Dutch racer scored the only podium that season after finishing 3rd at Putrajaya ePrix.

Frijns stayed with the team for a 2016-2017 campaign and was teamed with Antonio Felix da Costa. The start was good after both drivers picked points in the season-opening race in Hong Kong, but later in the season, the results declined. In the fourth FE season (2017-2018), Andretti opted for Antonio Felix da Costa as the main driver while Kamui Kobayashi, Tom Blomqvist and Stephane Sarrazin were invited to fill up the second seat.

For the fifth season the new Gen2 cars were introduced and Andretti Autosport became an official partner of BMW in Formula E,forming the BMW i Andretti Motorsport with Antonio Felix da Costa and Alexander Sims as drivers.

The titles in the Global Rallycross Championship

Form 2014 to 2017, Andretti Autosport has been involved in the popular Red Bull Global Rallycross Championship. The team was represented with two Volkswagen cars, first Polo then Beetle, dominated in the championship in the last three seasons. 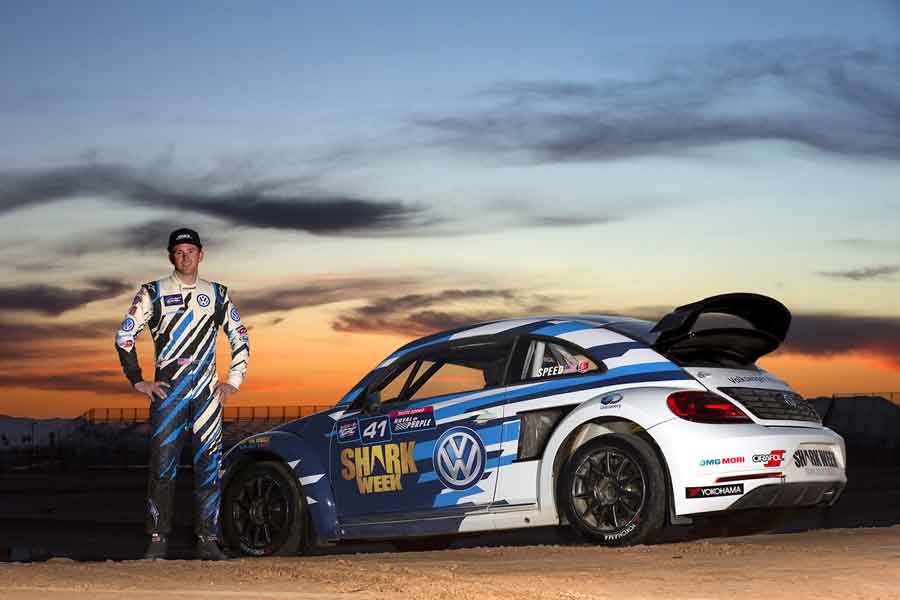 In 2018, the championship was converted into the ARX Americas Rallycross and Scott Speed took the fourth consecutive championship title with Andretti.

American Le Mans Series also was one of the championships in which team tried its luck. It was in 2008 when Andretti Green Racing was selected by Honda Performance Development to be one of the factory-backed teams for Acura LMP program.

The debut was very good after the new car finished 2nd in 2007 12 Hours of Sebring, with Tony Kanaan, Bryan Herta, and Dario and Marino Franchitti as drivers. The rest of the campaign wasn’t as good and the team finished 5th in the championship. 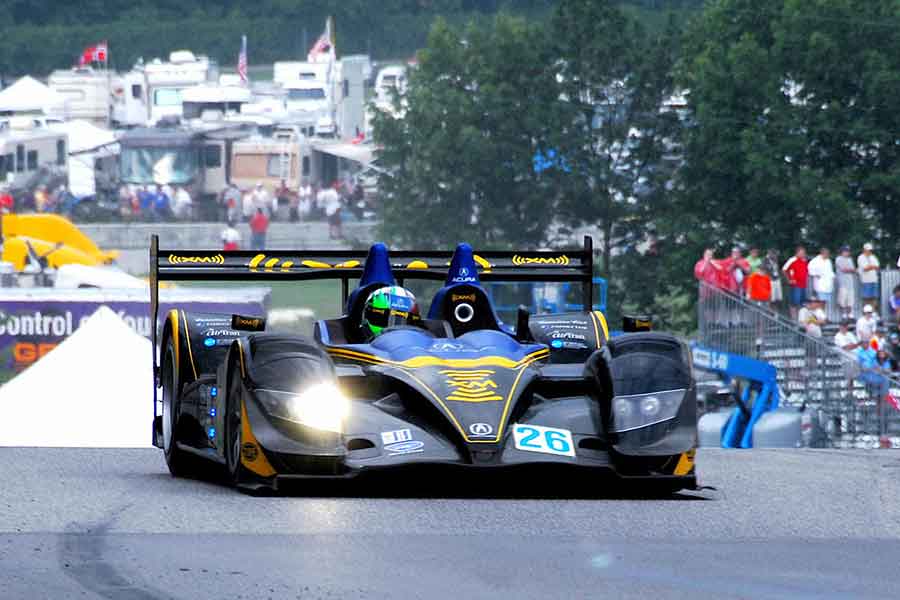 In 2008, second and the last year in the ALMS, Andretti Autosport’s Acura ARX-01b with driver line-up of Christian Fittipaldi, Kanaan, and Herta, did well during most of the season, scored a couple of wins, and finally finished 4th in the final standings. However, Acura wasn’t happy with ups and downs and parted ways with the team.

Andretti Autosport was responsible for setting the Unites States team for the short-lived A1 Grand Prix Series in the 2008-2009 season. Marco Andretti was the main driver, while JR Hildebrand and Charlie Kimball raced in two rounds. 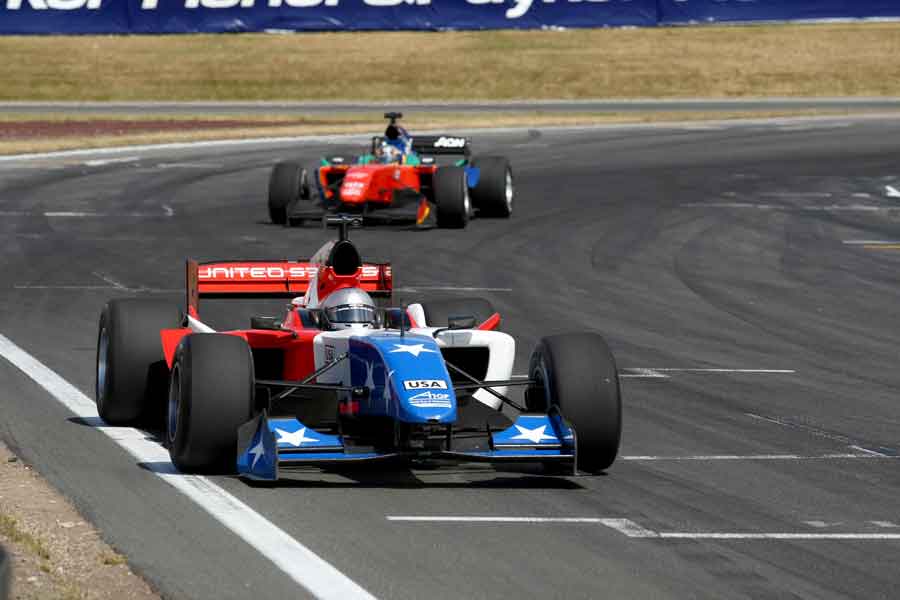 However, the results achieved with the modified chassis of legendary Ferrari F2004 powered by V8 Ferrari engine weren’t impressive. The only podium finish was scored by Andretti in the feature race in Malaysia and the US Team finished 11th in the standings.

In 2010 Andretti Autosport joined the US F2000 National Championship. Sage Karam became the champion that year, while the team also won the title and defended its crown in the following year, while Spencer Pigot was a vice-champion in the Drivers’ Championship.

Andretti Autosport stayed in the series for another two seasons and continued to promote young drivers. Interestingly, in 2012 and 2013 team finished 4th in the standings. In 2014, Andretti Autosport decided to leave the championship with an aim to focus at Formula E.

Always opened to new challenges, Andretti Autosport moved its operations to Australia in 2018. Together with the Australian team Walkinshaw Racing and the British team United Autosports they created the Walkinshaw Andretti United, announcing a participation in the Supercars Championship with two Holden Commodores.

“I’m very excited to announce our new partnership with Walkinshaw Racing and United Autosports. I have always set a goal for Andretti Autosport to diversify and succeed across multiple platforms, and this opportunity is a natural next step for the team as we continue to expand globally. Together with Walkinshaw Racing and United Autosports, we now have three iconic organisations working together. We are determined to succeed, and I have full confidence that this new venture, Walkinshaw Andretti United, will become a leading Supercars team,” said Michael Andretti, CEO and Chairman of Andretti Autosport.