United Autosports - step by step towards the top of the world

United Autosports is a British racing team, based in Garforth (West Yorkshire) and founded in 2009, which currently competes in the European Le Mans Series with LMP2 and LMP3 prototypes. The team was founded by an American businessman and race car driver Zak Brown and his partner, the British racer Richard Dean. 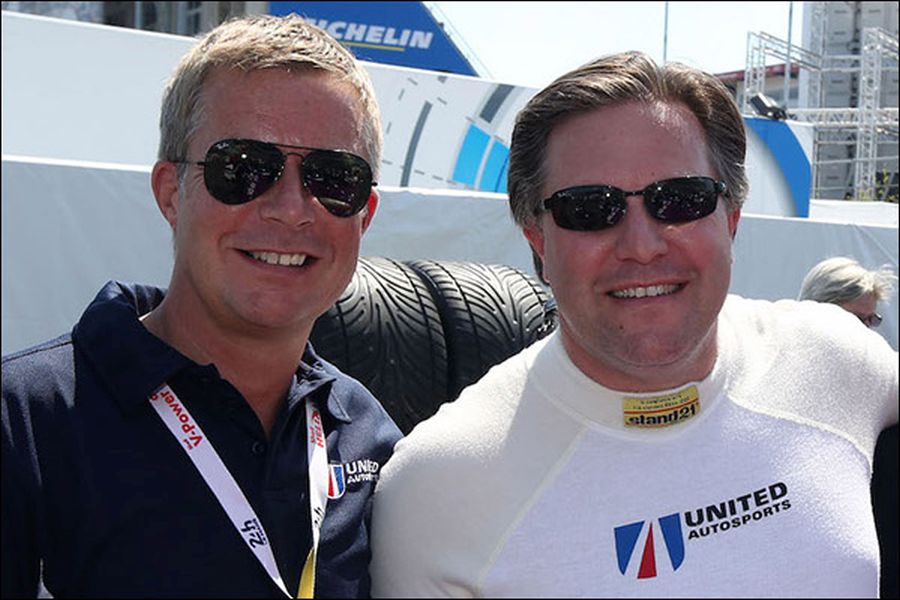 Before founding his own team, Zak Brown competed in various single-seater and sports car competitions. He was also a founder and CEO of US-based Just Marketing International (JMI), the world’s leading motorsports marketing agency. United Autosports’ on-track efforts will be supported with JMI’s full-service resources, applied principally to promoting the team’s sponsors on both sides of the Atlantic. Zak Brown is also an Executive Director of the McLaren Group Ltd, which includes their Formula One team.

Richard Dean also has an impressive motorsport CV. In addition to a distinguished career as a driver, including a GT2 class victory at 2006 Le Mans 24h, Dean has additionally served as managing director of Ginetta Cars and as the Director of Zytek Engineering. 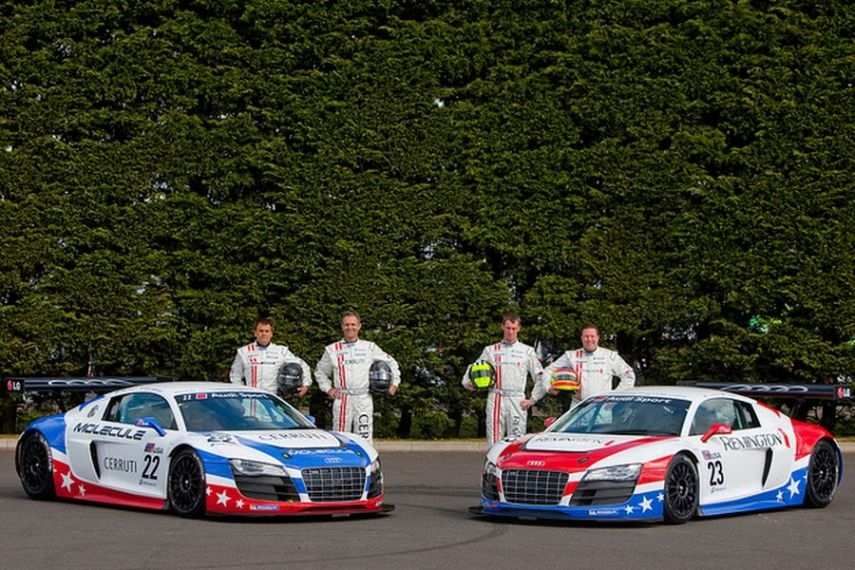 The first competition for the team was the 2010 FIA GT3 European Championship. The team fielded two factory-assisted Audi R8 LMS race cars, the #22 for Mike Guasch and Mark Patterson, the #23 for Zak Brown and Matt Bell. The best result for the team was a third place for #23 car at Autodromo Algarve and the team finished 12th in the final standings.

Maiden victory for the team with Ginetta G50

The team also participated in selected rounds of the 2010 British GT Championship, in the GT3 class with Audi R8 LMS and in the G4 class with Ginetta G50. The first victory came in August at Silverstone, where Matt Bell and Rob Bell clinched a win in the G4 class.

In November 2010, United Autosports fielded two cars in the third (last) round of the Intercontinental Le Mans Cup, at 1000 km of Zhuhai. The #97 Audi R8 LMS, driven by Henri Richard and Alain Li, finished third in the GTC class. The #96 Audi, driven by Danny Watts, Richard Meins and Frank Yu, didn’t finish the race. 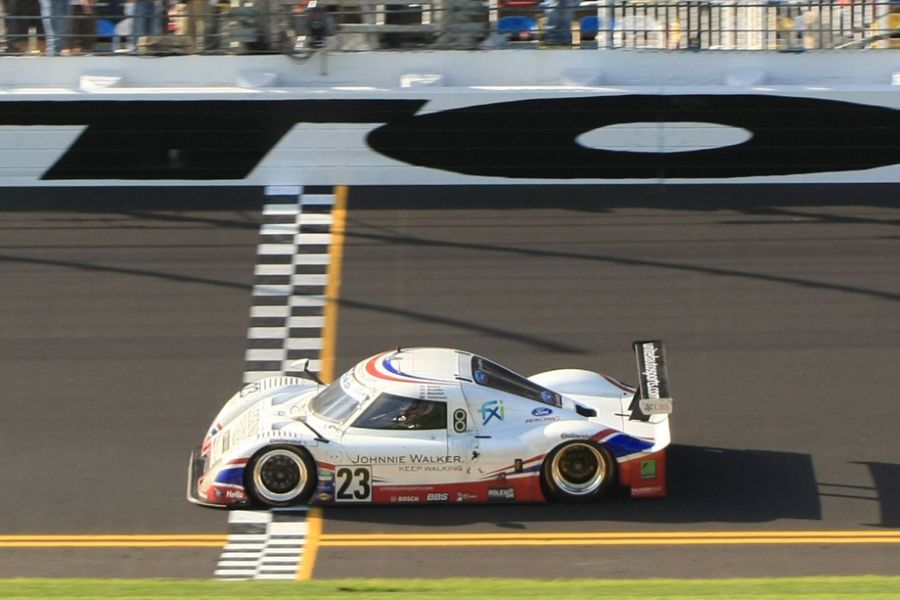 In January 2011, the team partnered with Michael Shank Racing for the Rolex 24 at Daytona. Their car was the #23 Riley Mk XX-Ford. The drivers were Zak Brown, Mark Patterson, Mark Blundell and Martin Brundle. They finished 4th in the Daytona prototype class.

In 2011, United Autosports continued to run two Audis in the FIA GT3 European Championship, with the slightly changed line-up, as Joe Osborne joined Mark Patterson in the #22 car. The season was not so successful, so the team ended a year at the back of the championship standings.

The team was more successful in the British GT Championship, where Matt Bell and Mike Guasch scored one win (Snetterton) and two podiums, to finish sixth in the final standings. 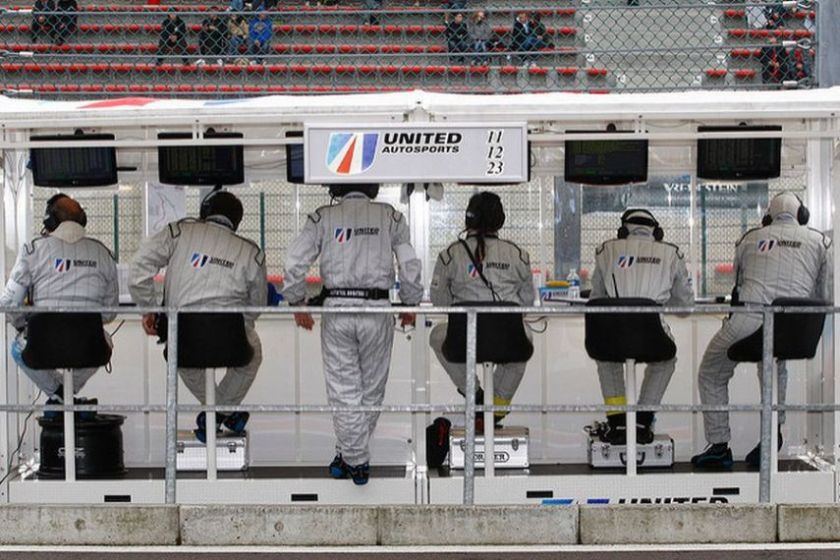 The highlight of the season was the team’s debut at 24 hours of Spa in July. The race was a part of the Blancpain Endurance Series and the team had three cars involved. Alongside regular drivers, there were some world famous racing stars and former F1 drivers in United Autosports’ Audis: Mark Blundell, Eddie Cheever, Arie Luyendyk, Johnny Herbert and Stefan Johansson.

The best-placed car was the #23 Audi in the 13th place, driven by Zak Brown, Richard Dean, Johnny Herbert and Stefan Johansson.

McLaren joined Audi in a garage in 2012

In 2012, the big change happened in United Autosports’ garage, as Audi R8 LMS was replaced by McLaren MP4-12C GT3. The team was using McLarens from in the first three rounds of the Blancpain Endurance Series, with #22 car in the Pro class and #23 car in the Pro-Am class. At 24 hours of Spa, the team participated with #23 Audi, not finishing the race.

In the 2012 British GT Championship season, the new car came in the middle of the season, immediately scoring a maiden victory in the first race at Snetterton. The victorious #24 McLaren was driven by Matt Bell and Charles Bateman. Until the end of the season, they added one more victory to the team’s account and finished third in the final standings. 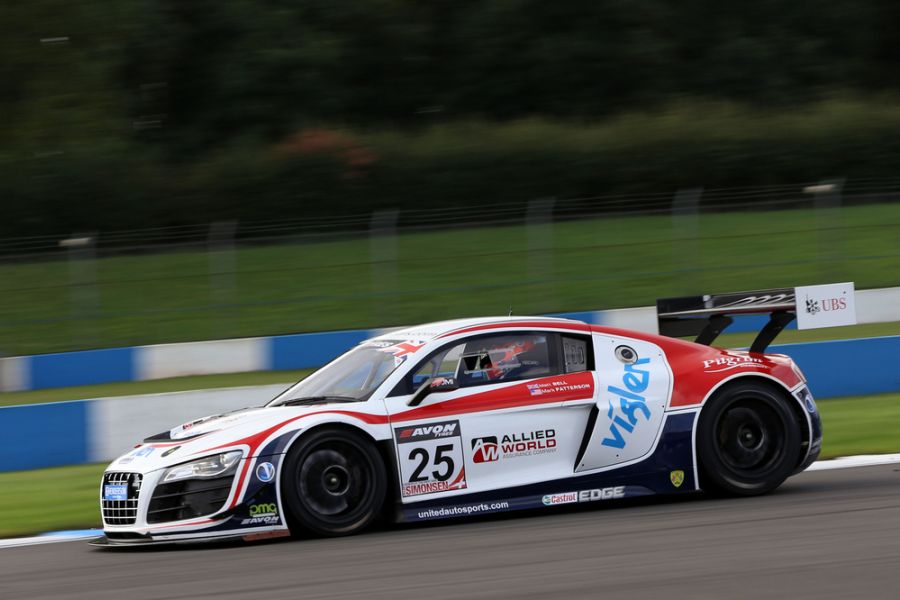 In the 2013 British GT Championship, United Autosports had two McLarens and one Audi in the GT3 class. The only victory was achieved by Matt Bell and Mark Patterson in the #25 Audi at the season’s finale at Donington Park. Bell and Patterson finished as the championship runner-ups, losing a title by one and a half point to Beechdean’s Andrew Howard.

In the 2013 Blancpain Endurance Series, United Autosports participated only at Spa 24 hours. The #125 Audi, driven by Mark Patterson, Alain Li, Glynn Geddie and Will Bratt, didn’t finish the race.

In 2013, United Autosports clinched its first championship title, Glynn Geddie became the Super GT class champion in the Supercar Challenge, the sports car racing series. He was driving the McLaren MP4-12C GT3 together with his father Jim Geddie. They won three of fifteen races. 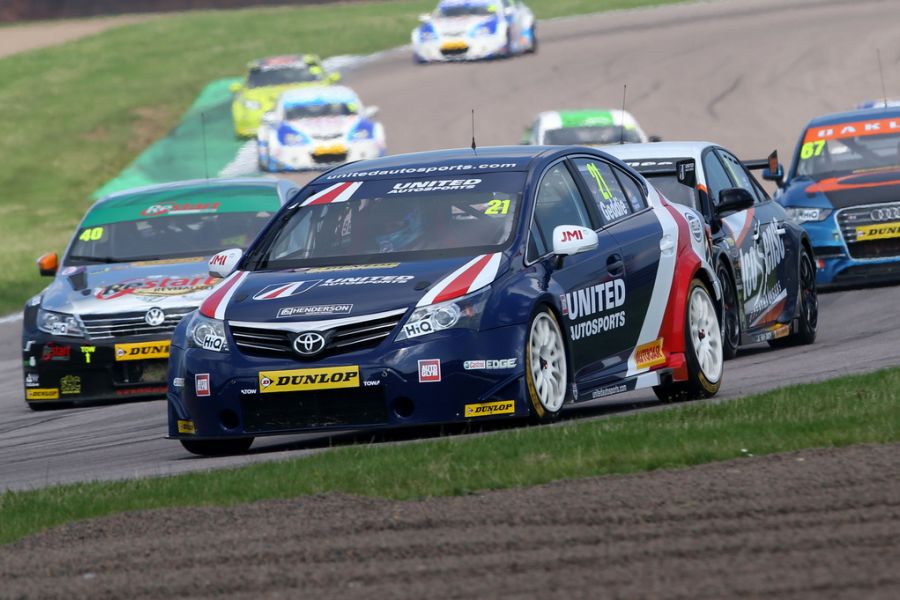 A season in the British Touring Car Championship

The new challenge for the team followed in 2014 when United Autosports entered the British Touring Car Championship. The team was running #20 Toyota Avensis for James Cole and #21 Toyota for Glynn Geddie. In the last two rounds, Geddie was replaced by Luke Hines. 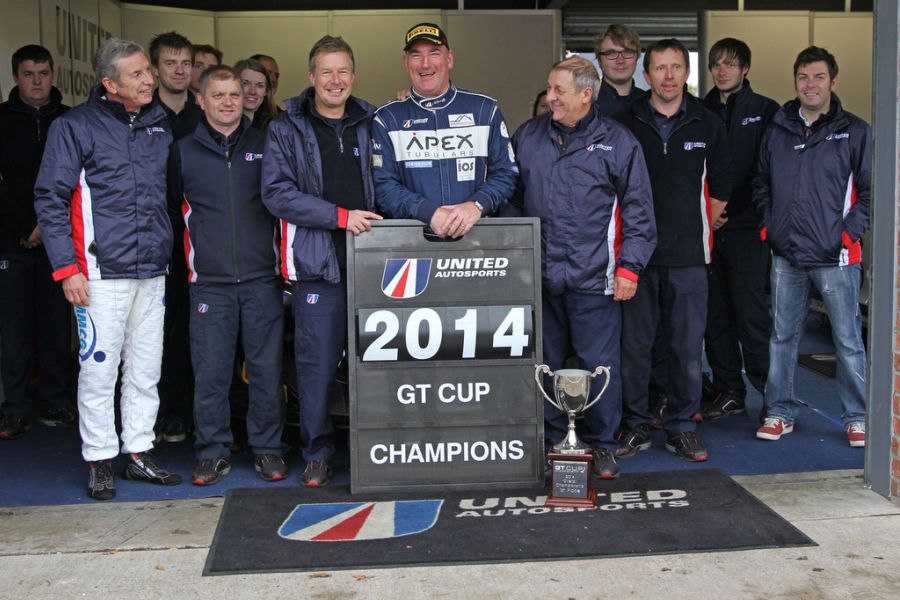 While racing with Toyota in the BTCC, United Autosports continued to compete in the British sports car championships. In the 2014 British GT Championship season, the team scored just one podium with the #23 Audi R8 LMS, driven by Matt Bell and Mark Patterson, at season-finale at Donington Park. The team finished 8th in the points.

On the other side, Jim Geddie brought one championship title to the team. He was the GT Cup UK champion in the GTO class, driving a McLaren MP4-12C GT3. The team also won the championship title in the 2014 Ginetta GT4 Supercup, with Carl Breeze and Luke Davenport driving two cars for United Autosports. In drivers’ standings, Breeze was third, Davenport sixth. 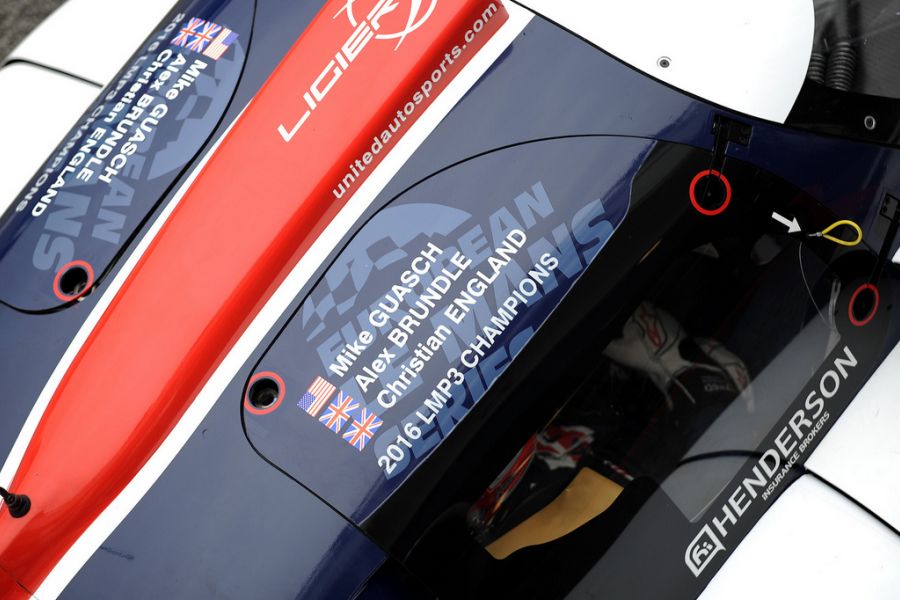 At the start of the season, the #2 crew had won three races in a row, at Silverstone, Imola and Red Bull Ring. They added two more podiums at Circuit Paul Ricard and Spa to cement their championship lead before season’s finale in Portugal. The #3 crew scored three podiums and finished fifth in the LMP3 standings. 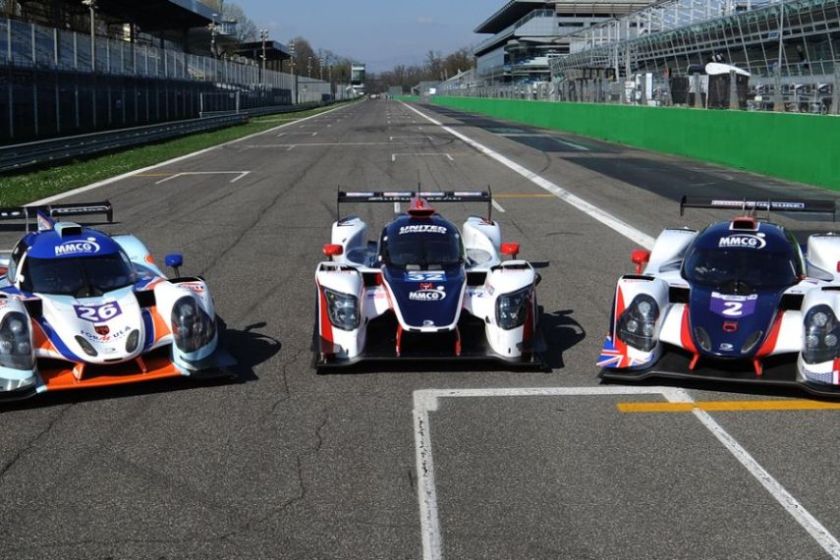 For the 2017 sports car racing season, the appetite was even bigger, so United Autosports entered three cars for the European Le Mans Series. They managed to defend the LMP3 title with #2 Ligier JS P3, driven by Sean Rayhall and John Falb. The #3 car finished third in the LMP3 standings.

In the ELMS LMP2 class, the team was running the #32 Ligier JS P217, finishing second in the class. The same car participated at 24 hours of Le Mans, driven by Will Owen, Hugo de Sadeeleer and Filipe Albuquerque. They were fifth overall and fourth in the LMP2 class.