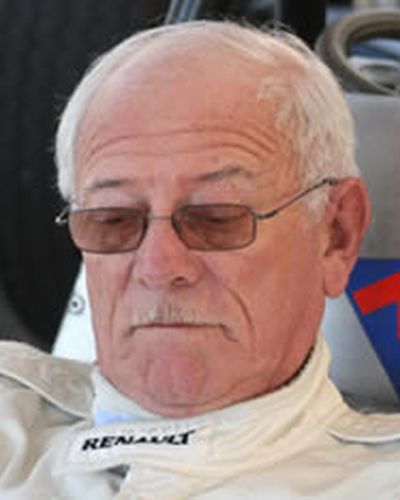 Jean-Pierre Jaussaud is a former racing driver from France, who was active for almost thirty years, between 1964 and 1992, competing with single-seaters, touring cars, sports cars/prototypes and rally cars.

His greatest achievements are two podiums and two overall victories at 24 hours of Le Mans, in 1978 together with Didier Pironi in the Renault-Alpine A442 and in 1980 together with Jean Rondeau in the Rondeau M379 prototype.

Besides winning at Le Mans, Jaussaud was a successful Formula 3 and Formula 2 competitor but he never entered Formula One. He gained some success in touring car races and he was a French production class champion in 1979 and in 1982, at Dakar Rally he finished third.

Jean-Pierre in the Le Mans-winning Alpine A442

Jean-Pierre Jaussaud was born on June 3, 1937, in Caen in northwestern France. Jaussaud started racing in 1962, attending courses in the Jim Russell Drivers School and the Winfield Racing School. His first racing competition was the French Formula 3 Championship in 1964. He was immediately among the front-runners, finishing third in the championship.

Next year, Jaussaud joined Matra factory team, finishing second in the championship behind Jean-Pierre Beltoise. In 1966, besides driving for Matra in the Formula 3, Jaussaud participated in selected sports car races, including 24 hours of Le Mans.

Jaussaud had Le Mans debut in June 1966, alongside Henri Pescarolo in the #43 Matra M620. They retired after just 38 laps due to engine failure. At 1967 Le Mans race, Pescarolo and Jaussaud were teammates again, sharing the #30 Matra M630. A suspension failure stopped them after 55 laps.

Jaussaud continued to compete in Formula 3 races, gaining some notable successes, such as the victory in the 1968 Monaco Grand Prix. He was second in the French championship two times (1967 and 1969), before clinching the title in 1970, driving privately-entered Tecno 69 and Martini Mk5.

In 1973, Jaussaud spent one more season in Formula 2, driving for Motul Rondel Racing. After that, he occasionally competed in F2 races until 1978, but his career had another direction, as he focused on endurance races.

In 1973, Jaussaud rejoined Matra to participate at 24 hours of Le Mans, together with Jean-Pierre Jabouille in the #12 Matra MS670B. They finished third in the overall classification. The race winners were their teammates in the #11 car Henri Pescarolo and Gerard Larrousse.

Jaussaud's fourth and last Le Mans participation with Matra followed in 1974 when he was sharing the #8 Matra MS670B with Jose Dolhem and Bob Wollek. The French trio didn't finish the race due to engine failure.

In 1975, Jaussaud participated in several Formula 2 races but the highlight of the season was his participation at Le Mans 24h, where he reached his second podium. Jaussaud was sharing the #10 Mirage GR8-Ford prototype of the British Gulf Research Racing, alongside Australian Vern Schuppan. After 24 hours of racing, they finished third, six laps behind the winners Jacky Ickx and Derek Bell, who were driving the #11 Gulf Mirage.

For the 1977 Le Mans race, Jaussaud was invited to drive for Renault Sport. He and Patrick Tambay started fourth on the grid, but their #7 Renault-Alpine A442 stopped after 158 laps with a broken engine.

In 1978, in the eighth participation at Le Mans, Jaussaud finally reached the top podium spot. He was sharing the #2 Renault-Alpine A442B with Didier Pironi. They made 369 laps around Circuit de la Sarthe, five more than the second-placed Porsche crew. It was the first and only victory for Renault at Le Mans, after that the company left endurance racing to concentrate on Formula One.

With Renault out of the grid, Jaussaud joined Ford at 1979 Le Mans race. Ford Concessionaires France and Grand Touring Cars Ltd. entered the race with #10 Ford-powered Mirage M10, driven by Jaussaud, Vern Schuppan and David Hobbs. Starting fifth on the grid, they made 121 laps only, which was insufficient to be classified in the final standings.

In 1980, Jaussaud and Jean Rondeau were partners again, in another Rondeau's prototype. It was the #16 Rondeau M379B, powered by Cosworth V8 engine. After 338 laps, they won the race with a 2-lap advantage over Jacky Ickx and Reinhold Joest in the Porsche 908.

During his years with Rondeau, Jaussaud took a new challenge in 1982, joining Rondeau's team at 1982 Dakar Rally. He was driving Mercedes 280 GE and sensationally finished third overall. Jaussaud returned to Dakar Rally with Mercedes three more times, later switching to Mitsubishi and then to Hino trucks. His last Dakar participation was in 1992.

As a versatile driver, Jaussaud also participated in many touring car races and competitions. His only triumph was in the 1979 French championship when he was the winner of Production class with Triumph Dolomite.

Jaussaud was a regular competitor at 24 hours of Spa between 1978 and 1988. It was the main endurance race for touring cars in that period of time. He competed with different cars (Ford Capri II, Triumph Dolomite Sprint, Ford Capri III, BMW 635 CSi, Mercedes-Benz 190 E, Ford Sierra RS500) but without notable results. His last race at Spa was in 1988 with Ford Sierra RS500.

Never too old to have fun on the race track

Gentlemen driver who don't know for the retirement

As a man who adored racing, Jaussaud didn't stop even when he turned 50 in 1987. In that time, he was regular in some French circuit racing cups, driving Porsche 944, Peugeot 505/Peugeot 309 or Citroen AX. In 1991, he appeared in the French Porsche Carrera Cup as a guest driver.

He officially retired from racing in 1992 and became a racing instructor, but he was never actually retired because he was spending days and nights on the race tracks. His last official appearance was at 24 hours of Barcelona in 2011, when Jean-Pierre (he was 74 then) raced with Renault Clio RS of Auto Sport GP2 team.