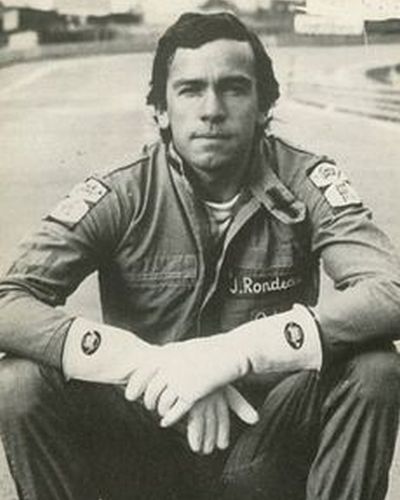 Jean Rondeau (1946-1985) was the French racing driver, team owner and a constructor of the race cars who has a special place in motorsport history as the only man to win at 24 hours of Le Mans with a car that he constructed and which was bearing his name. It was the Rondeau M379B in which he won Le Mans race in 1980.

Besides that overall victory at Le Mans, Rondeau scored two GTP class Le Mans wins in 1977 and 1978, the first one with Inaltera LM and the second one with Rondeau M378. His last big result at Le Mans was the overall podium in 1984 when he finished in the second place with Porsche 956.

Jean Rondeau with one of his racing prototypes

Jean Rondeau was born on May 13, 1946, in Le Mans. He started a racing career in the early 1970s, participating in different competitions, such were French Circuit Championship or Formula Renault. At 24 hours of Le Mans, he debuted in 1972, together with Brian Robinson in a Chevron B21-Cosworth. They retired after 76 laps.

In 1973, he planned to race at Le Mans with Christian Poirot's Porsche 908 but the team failed to qualify for the race. They returned in 1974 with the same car, finishing in 19th place overall and 7th in the S3.0 class. The third Le Mans participation with third different car followed in 1975 when Rondeau was sharing a Mazda RX-3 with Claude Bouchet. They failed to finish the race.

In 1975, Jean Rondeau became a race car constructor, wanting to fill a gap in the motorsport field after some French factory teams (Matra, Ligier) withdrew from the competition. He decided to use Ford-Cosworth DFV V8 engine, which had powered a Mirage M8, the winning car in the 1975 24h Le Mans.

He built a Group 6 car which was eligible to compete in the GTP class at 24 hours of Le Mans. After picking up sponsorship from the French wallpaper manufacturer Inaltera, Rondeau named his car Inaltera LM.

Class win and podium for Inaltera LM in 1976

In February 1977, Rondeau fielded two cars at 24 hours of Daytona but both retired. He and Jean-Pierre Beltoise were driving the #20 car. The all-female crew was in the #21 car - Christine Beckers and Lella Lombardi.

Le Mans class win for Rondeau in his car

Inaltera withdrew its sponsorship at the end of 1977, so Rondeau continued to build cars which were bearing his name. The first one was the Rondeau M378. With that car, Rondeau finished ninth overall and clinched another GTP class victory at Le Mans, sharing a car with Bernard Darniche and Jacky Haran.

And then the 1980 race came, in which the #16 Rondeau M379B of Jean Rondeau and Jean-Pierre Jaussaud battled against #9 Porsche 908/80 of Jacky Ickx and Reinhold Joest. After 338 laps in heavy conditions, the French crew claimed a victory. It was the first Le Mans win ever for a driver in a car which bears his name.

It was, in a fact, a double triumph for Rondeau's team because the #17 Rondeau M379B finished in the third place. Drivers were Jean-Michel Martin, Philippe Martin and Gordon Spice. The third car, driven by Henri Pescarolo and Jean Ragnotti, didn't reach the finish.

In 1981, Rondeau's team entered five cars at Le Mans, finishing second and third behind race-winning Porsche 936. Jean Rondeau himself was driving the #58 car, together with Jean-Pierre Jaussaud. They retired after 58 laps.

However, the good results of the team were overshadowed by the death of Jean-Louis Lafosse. He was driving the #25 Rondeau M379, crashing out on Lap 29 at Hunaudieres straight.

In 1982, Jean Rondeau participated in selected races of the FIA World Endurance Championship, driving a Rondeau M382. His best result was the 8th place at 1000 km of Spa. At 24 hours of Le Mans, Rondeau was sharing the #12 with Jean Ragnotti and Henri Pescarolo. They retired after 146 laps. There were six Rondeau M382 cars in that race, three of Rondeau's team and three of other private teams.

In 1983, Rondeau participated at 24h Le Mans under the banner of Ford France, sharing the #26 Rondeau M482 with Alain Ferte and Michel Ferte. They retired after 90 laps. There were seven Rondeau cars in that race, both M382 and M482 models.

1984 - debut at Sebring and Le Mans podium with Porsche

Rondeau's team was disbanded at the end of 1983 but many private teams continued to use Rondeau prototypes in the following years.  In March 1984, Jean Rondeau debuted at Sebring 12 hours, driving the #41 Rondeau M382 for Silver Lake Plantation. His co-drivers were Gary Belcher and John Gunn. They retired with electric failure.

In June 1984, Rondeau returned to Le Mans to race as a member of Preston Henn's T-Bird Swap Shop team. He and John Paul Jr. were driving the #26 Porsche 956, sensationally finishing the race in the second place, behind Joest Racing's Porsche 956.

At 1985 Le Mans race, Jean Rondeau was driving the WM-Peugeot P83B while other teams were using cars built in his factory. Sharing the #42 car with Michel Pignard and Jean-Daniel Raulet, Rondeau finished in the 17th place.

It was his last race. He was killed on December 27, 1985, near Champagne, France, in a traffic accident at the railway crossing. His legacy continued to live through his cars, which were returning to Le Mans until 1988. In total, 19 Rondeau chassis were built.