Daytona International Speedway is one of the most popular race tracks in the United States. Situated in Daytona Beach, Florida, the track was opened in 1959.

The most known race at the 2.5-mile oval is Daytona 500, which is part of the NASCAR Cup Series. The sports car course, constructed inside the oval, is the venue of the 24 Hours of Daytona, the most known American endurance race.

The primary layout at Daytona is a 2.5-mile (4.0 km) tri-oval. Besides the oval, there is a 3.56-mile sports car course, a 2.95-mile motorcycle course and a quarter-mile karting and motorcycle flat track. Lake Lloyd, the venue for powerboat racing, is also situated inside the speedway. 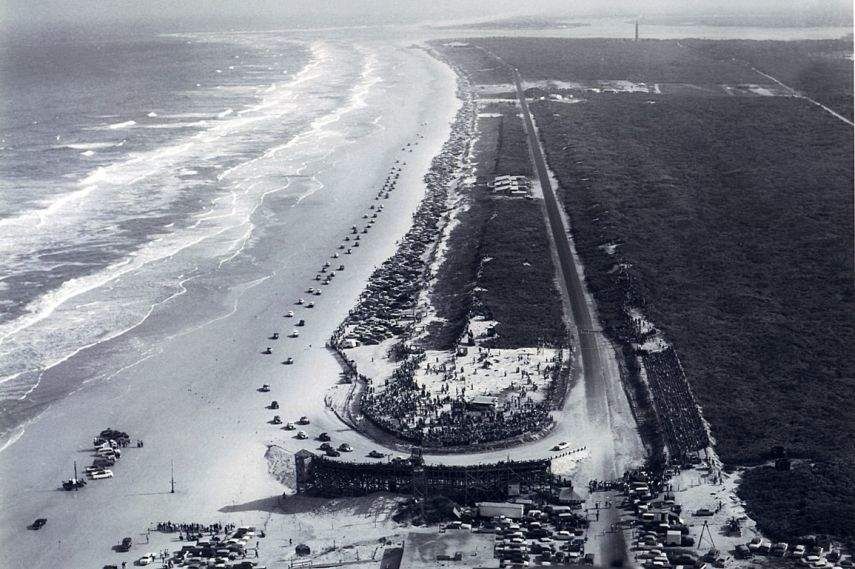 The track was built in 1959 by the NASCAR founder William “Bill” France Sr., as a replacement for Daytona Beach Road Course, which was the venue of NASCAR races since the beginning in 1948.

Since the opening, the speedway has been renovated four times, with the infield renovated in 2004 and the track repaved in 1978 and 2010. The last renovation, named Daytona Rising, was completed in January of 2016. The project featured redesign of the grandstands, with capacity of 101,500 permanent seats and the ability to increase that number to 125,000. 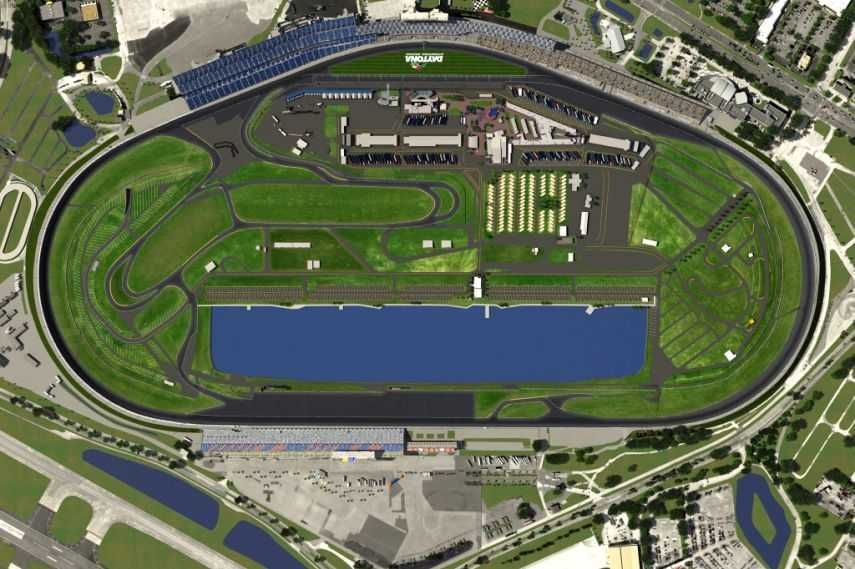 The idea of building a new track was conceived in 1953 by William France. He hired the engineer Charles Moneypenny, who took the engineering reports of the Ford Proving Ground’s high speed test track and applied it for the new Daytona track with high banked corners. France wanted to allow the cars to reach high speeds and to give the fans a better view of the cars on track.

Daytona Beach city commission leased the land to Francehe collected the money and the construction started in November 1957. Constructors had to dig out millions of tons of soil from the track’s infield. The hole was filled with water and a lake was created. The Lake Lloyd was named after Joseph “Sax” Lloyd, one of the original six members of the Daytona Beach Speedway Authority.

Because of the extreme degree of banking, constructors had to use new building procedures. Moneypenny had to come up with a way to pave the incline. He connected the paving equipment to bulldozers anchored at the top of the banking. This would allow the paving equipment to pave the banking without slipping or rolling down the incline. Moneypenny patented his construction method and later designed the Talladega Superspeedway and Michigan International Speedway. 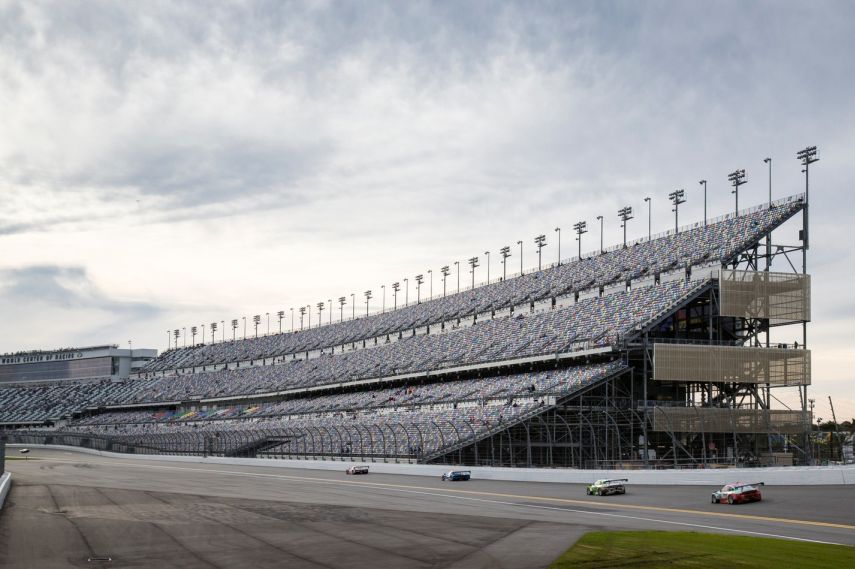 One of two circuits with restrictor plates

Daytona’s tri-oval is 2.5 miles (4.0 km) long with 31° banking in the turns and 18° banking at the start/finish line. The front straight is 3,800 feet (1,200 m) long and the back straight (or superstretch) is 3,000 feet (910 m) long. The tri-oval shape was revolutionary at the time as it greatly improved sight lines for fans. It is one of the two tracks in the Cup Series on which restrictor plates is used to slow the cars down due to the high speeds, the other being Talladega Superspeedway.

Absolute speed record is set on October 9, 2013. Colin Braun drove a Daytona Prototype car prepared by Michael Shank Racing to set a single-lap record on the tri-oval configuration of 222.971 miles per hour (358.837 km/h). NASCAR Cup Series record holder is Bill Elliot, who needed 42.783s to round a lap in a qualifying session, with an average speed of 210.364 miles per hour (338.548 km/h). Elliott set the record in 1987, before restrictor plates became obligatory.

At the 3.56-miles long road course, the record holder is PJ Jones, who set the record lap time of 1m33.875s in 1993, driving Toyota Eagle in the IMSA GT Championship. 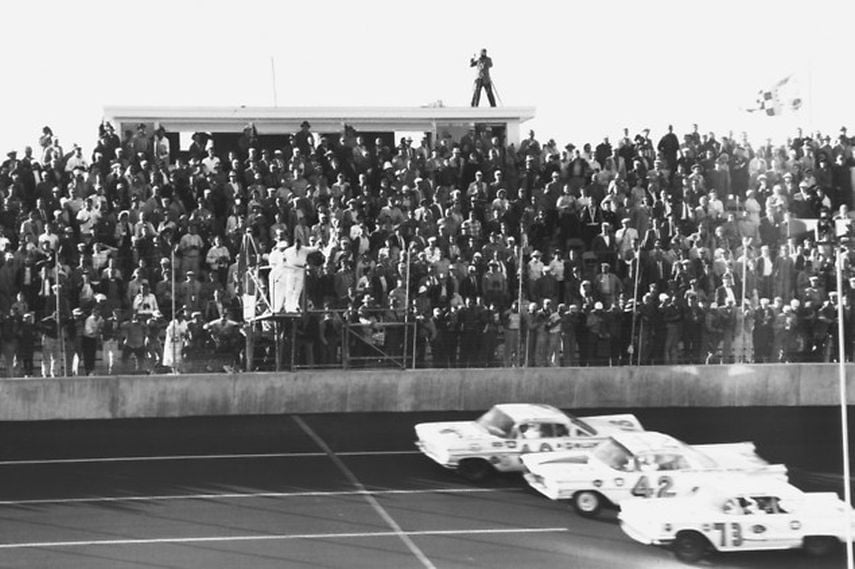 Lee Petty – the winner of the first ever Daytona 500

The first racing cars attended Daytona Speedway on February 6th 1959, during the practice run for the inaugural Daytona 500 race which was held on February 22. The first race was incredible: Lee Petty beat Johnny Beauchamp in a photo finish that took three days to adjudicate. Petty had an average speed of 218.10 km/h, which made Daytona Speedway the fastest stock race track, until Talladega Superspeedway was opened 10 years later. A total of 59 cars competed at the first Daytona 500, 20 of them were convertibles.

Sports cars also debuted at Daytona Speedway’s infield course in April 1959, with the 1000-km race won by Roberto Mieres in Porsche RSK. In April 1959, Daytona also hosted the 100-mile Champ Car race, in which Jim Rathmann won with an average speed of 274 km/h. At the time, it was the fastest motor race ever.

In the same race, Daytona Speedway took its first fatal victim during the race, when George Amick hit a wall and was killed. He wasn’t the first driver who lost his life at the new circuit. Marshall Teague was killed during the USAC-supervised test session on February 11th, just five days after the inaugural race. 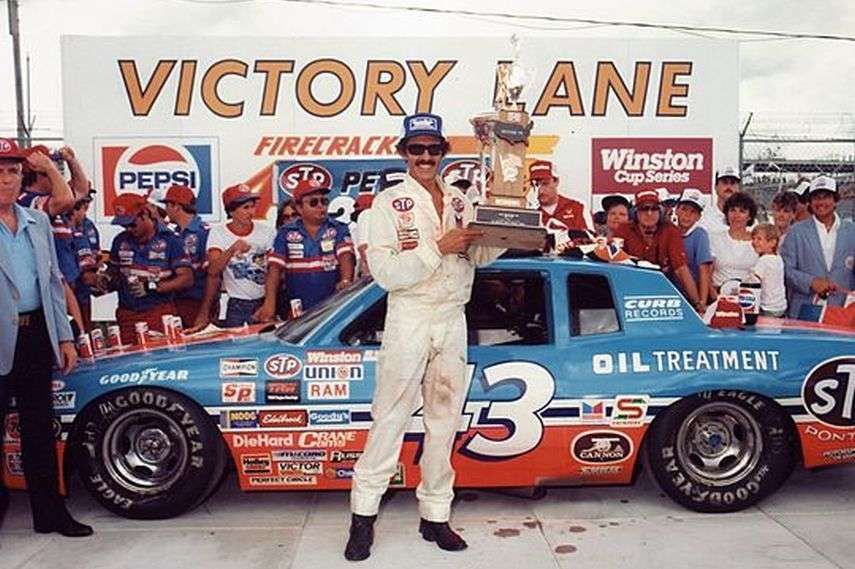 During the following decades, Daytona 500 became the most important and most prestigious race in the NASCAR calendar. Since 1982, the race has been the season-opening race of the Sprint Cup Series.

Dale Earnhardt Sr. won the Daytona 500 in 1998, after 20 years of trying. Three years later, he was killed in an accident which became probably the most memorable moment in the history of NASCAR, known as the Black Sunday. In the final lap of the race, Dale Earnhardt was third, behind Michael Waltrip and his son Dale Earnhardt Jr, when he lost control and crashed into the outside wall. A total of 36 people have been fatally injured at Daytona International Speedway: 22 car drivers, nine motorcyclists, three go-kart drivers, one powerboat racer and one track worker. 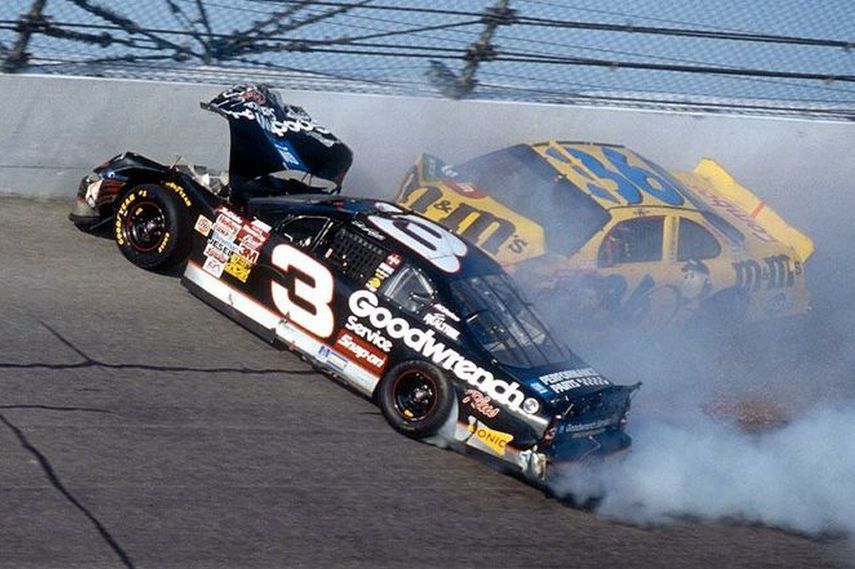 Five NASCAR races during the year

Daytona 500 is one of two annual Cup Series races at Daytona Speedway, the other is the 400-mile race sponsored by Coke Zero, previously named Firecracker 400 or Pepsi 400. The record holder for that race with five wins is David Pearson, ahead of the four-time winners Cale Yarborough and Tony Stewart.

Other NASCAR Series (Xfinity and Truck) also competed at Daytona, Xfinity even with two races in one season. ARCA Series had a 200-mile race since 1964. 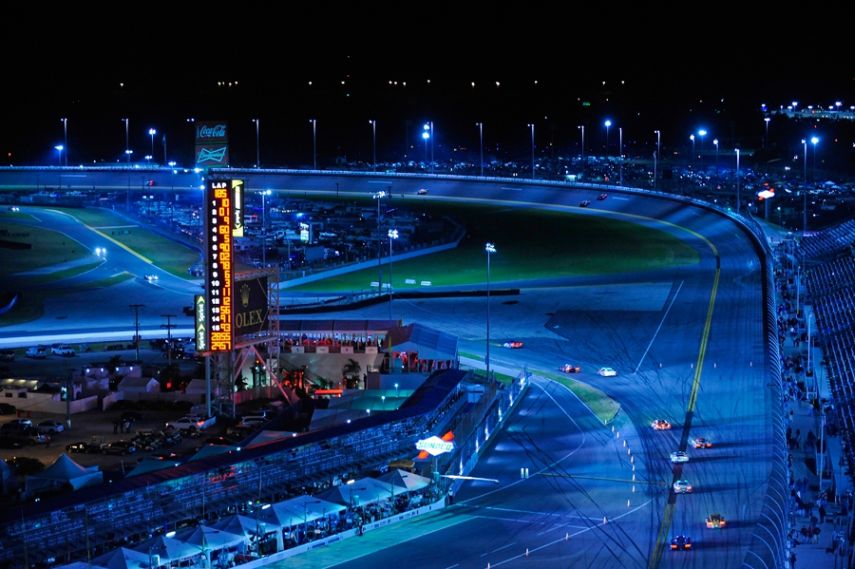 Racing during the night is usual at Daytona since 1996, and the first 24-hour race

The second major event at Daytona Speedway and the biggest race at Daytona’s sports car course is the 24 Hours of Daytona, or Rolex 24, named after sponsor. The biggest American endurance race started as a 3-hour race in 1962, but since 1966, it lasted for 24 hours, with the only exception of 1972, when a 6-hour race was held because of energy crisis.

The first 24-hour event in 1966 was won by Ken Miles and Lloyd Ruby, driving a Ford GT40 Mk II. In 1967, Lorenzo Bandini and Chris Amon led the Ferrari’s 1-2-3 victory with Ferrari 330 P4. To commemorate that victory, the road-legal model 365 GTB/4 was given the unofficial name Ferrari Daytona. 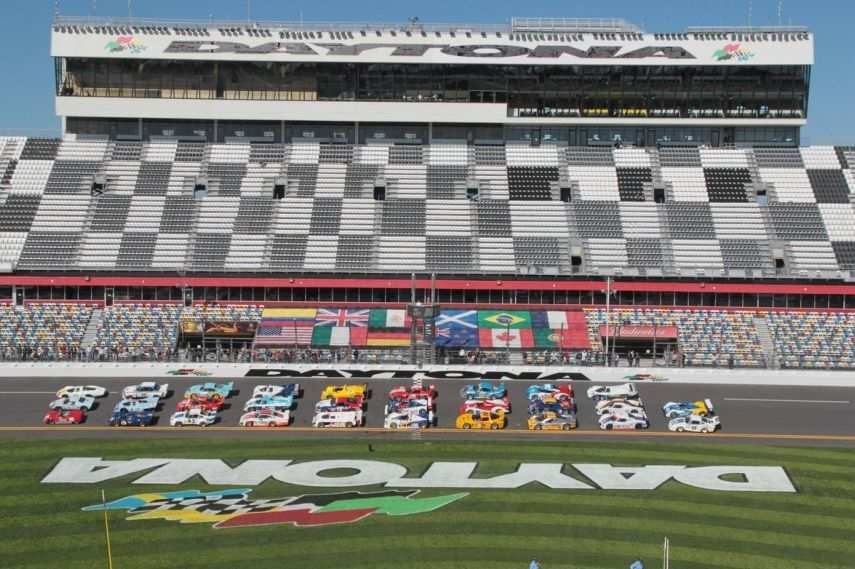 Daytona’s endurance race was a part of different championships during the years, and many Formula One champions and legends competed and scored victories in it. Among the others, the winners were Dan Gurney, Pedro Rodriguez, Phil Hill, Jo Siffert, Hans Herrmann, Mark Donohue, Mario Andretti, Jacky Ickx, AJ Foyt, Juan Pablo Montoya, etc. 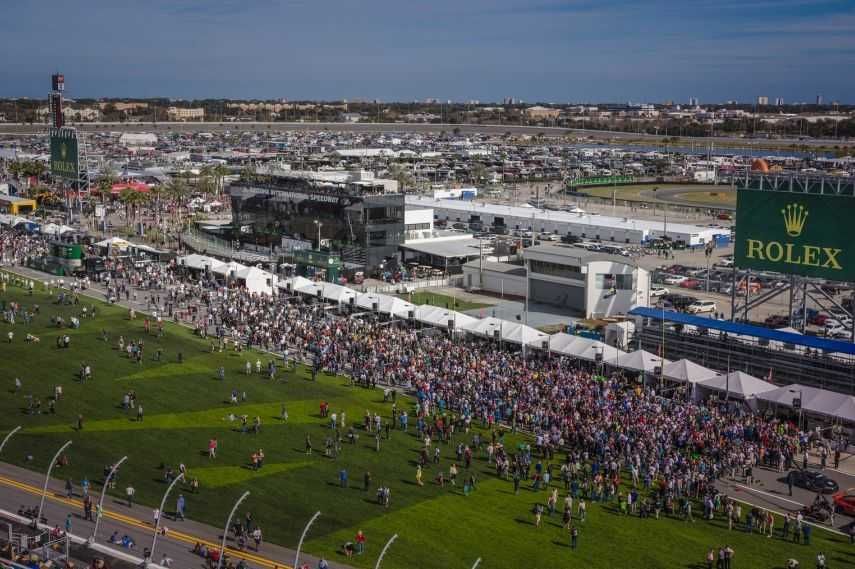 Fans adore the Daytona Speedway. Sprint Fanzone was established in 2004

Daytona International Speedway is very popular among the fans. One of the reasons is The Sprint Fanzone, built in 2004 as part of the renovations. That facility offers fans to get closer to drivers and race teams. Fans are able to walk on top of the garages and view track and garage activities. Fans can also view the race teams working in the garage, including technical inspection, through windows. The garage windows also include slots for fans to hand merchandise to drivers for autographs. The fanzone also includes a live entertainment stage, additional food and drink areas and various other activities and displays.

The most recent Daytona Rising project, worth 400 million dollars, resulted with many more facilities to offer. The makeover of the track, finished in January 2016, included huge concourses with interactive displays, 1,400 television screens, 60 suites, 40 escalators and 17 elevators, and a nose-cone replica of a space shuttle. All that for an unforgettable experience of every attending fan.