Auto Club Speedway is a two-mile superspeedway in Fontana, California, which has been a venue of NASCAR races since its opening in 1997. Drag races and motorcycle races also take place at Auto Club Speedway, and the IndyCar races were held there until 2015.

When it was built in 1996, the name of the circuit was California Speedway, but in 2008, the Automobile Club of Southern California became the title sponsor and the track was renamed to Auto Club Speedway. The track is owned and operated by International Speedway Corporation. 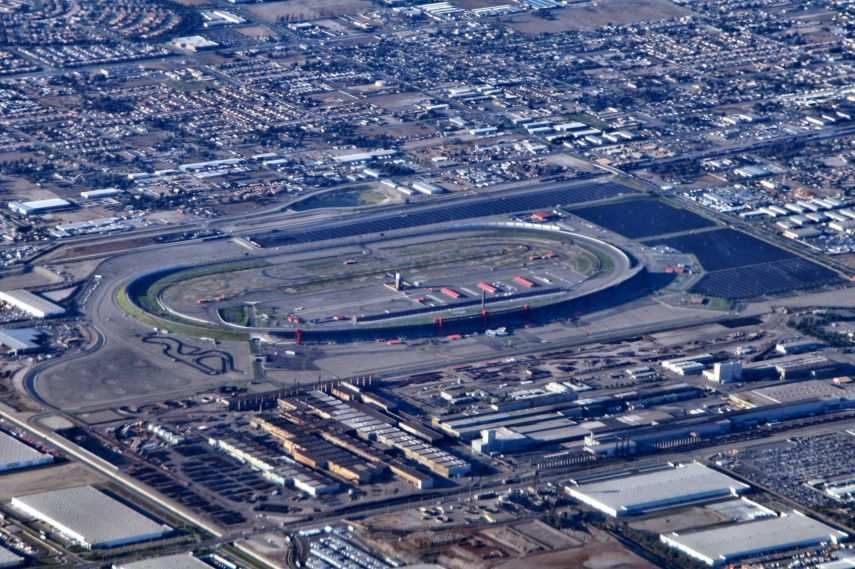 Built on the site of the abandoned Fontana Kaiser Steel Mill

The idea of a new race track was born in 1994 when Roger Penske and the Kaiser company announced that they will build a raceway on the site of the abandoned Kaiser Steel Mill in Fontana. The construction of the site began in November 1995. The 100-foot water tower, a landmark of the Kaiser property, was preserved in the center of the track to be used as a scoreboard. The construction was finished in late 1996.

The main track is a D-shaped 2-mile oval with four turns. In the infield, there is a 2.8-mile road course circuit with a few configurations (for sports cars, motorcycles or test circuit), while a quarter-mile drag strip (built in 2001) is placed outside of the backstretch. In 2003, the lights were installed, so that the night races could be held. Fontana speedway had a grandstand capacity of 68,000 and 28 skyboxes. The capacity was 92,000 in the beginning, but was reduced to 68,000 in in 2014. 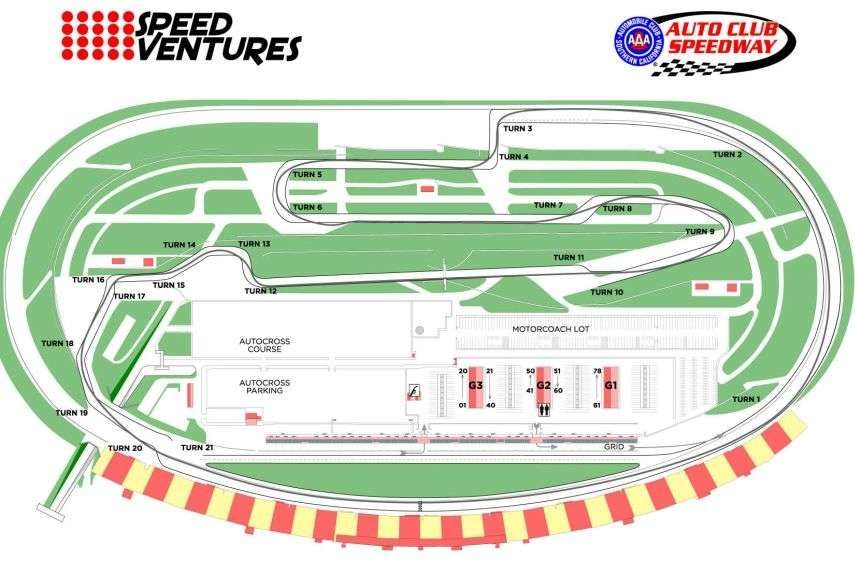 CART and NASCAR announced that they will organize races in Fontana even before the construction was over. First cars appeared at the track in January 1997. After a few months of testing, the opening ceremony was held on June 20, 1997, with the first race of NASCAR West Series held the following day.

The first race of NASCAR Sprint Cup Series (Winston Cup in that time) was held on June 22nd, 1997. The race was called the California 500 and after 21 lead changes, Jeff Gordon finished first in the Hendrick Motorsports’ Chevrolet. 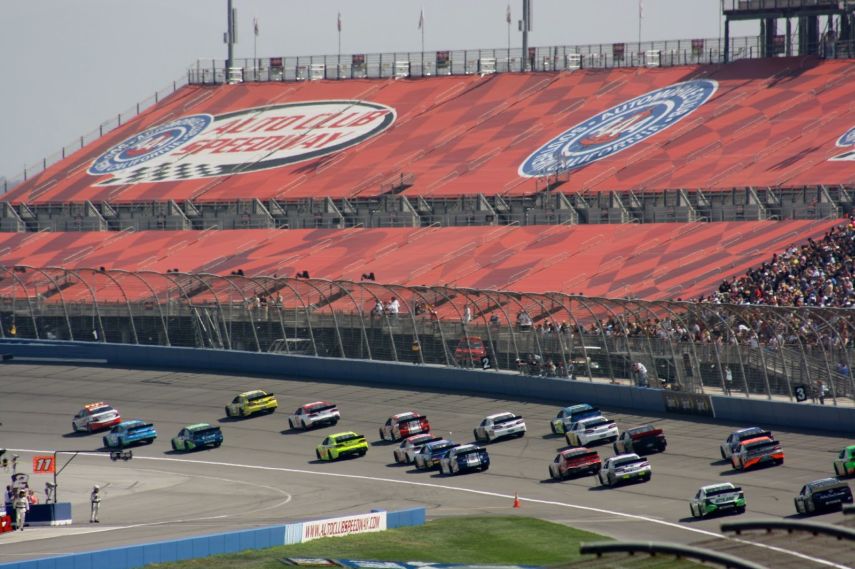 NASCAR started to race at Fontana in 1997

In 19 races between 1997 and 2015, Jeff Gordon and Matt Kenseth scored three victories each, and Jimmie Johnson and Kyle Busch scored two wins each.

Jimmie Johnson won three of seven races held during the expanded schedule, so he became the record holder with the total of five victories at Fontana. Kyle Busch added one victory and increased the number to three. 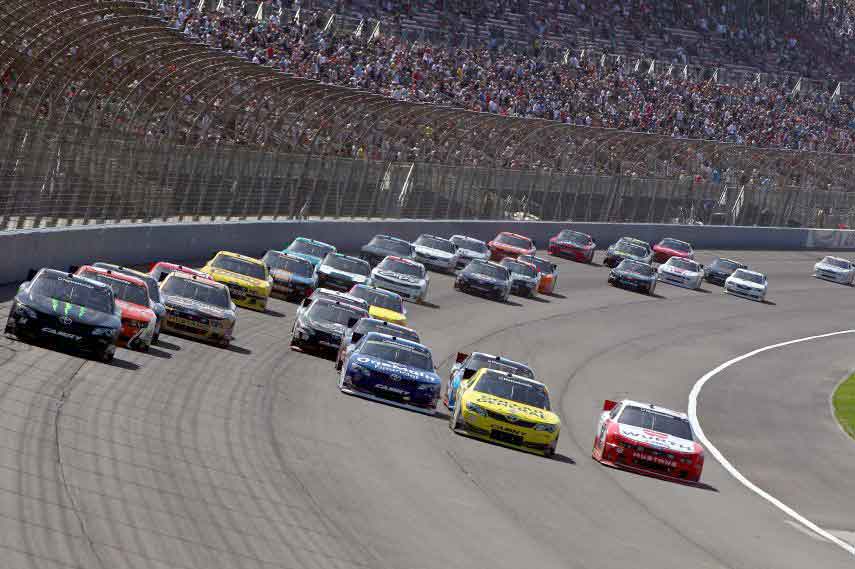 Five NASCAR races annually were held between 2004 and 2009

After the 2010 event, NASCAR announced that Auto Club Speedway will have only one Sprint Cup race starting from 2010. The reason was poor attendance which caused by the lack of interest and unstable weather conditions.

Other NASCAR series also competed at Auto Club Speedway. Xfinity Series (previously Busch Series and Nationwide Series) held its races since 1997, with two annual races between 2004 and 2010. The most successful multiple winners were Kyle Busch with six victories and Matt Kenseth with four wins, so they passed Jimmie Johnson on the list of the drivers with most victories in all NASCAR Series at Fontana.

But that’s not all because Kyle Bush scored two more victories at NASCAR Truck Series races, which were held at Fontana from 1997 to 2009. So, until the end of 2015, Kyle Busch collected a total of 11 victories at Auto Club Speedway. 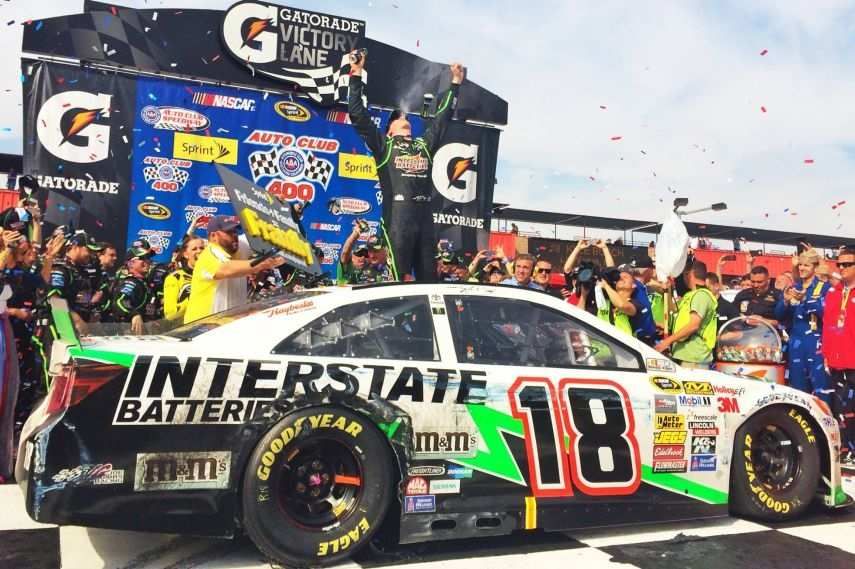 Open-wheelers raced at California Speedway since its opening in 1997. The first CART World Series 500-mile race was held on September 28th, 1997, and the winner was Mark Blundell. In the following years, Jimmy Vasser scored two wins. Other winners were Adrian Fernandez, Christian Fittipaldi and Cristiano da Matta.

In 2002 and 2003, there was a double programme because Indy Racing League also joined the Fontana with a 400-mile race. Sam Hornish Jr. was the winner in both races. Adrian Fernandez scored an Indy Car victory in 2004, and Dario Franchitti was the fastest in 2005.

After that, Indy Car left Fontana but it returned in 2012 with its season finale 500-mile night race. The winner was Ed Carpenter. In the following three events, the winners were Will Power, Tony Kanaan and Graham Rahal. In 2016, Fontana was again dropped from the IndyCar calendar. 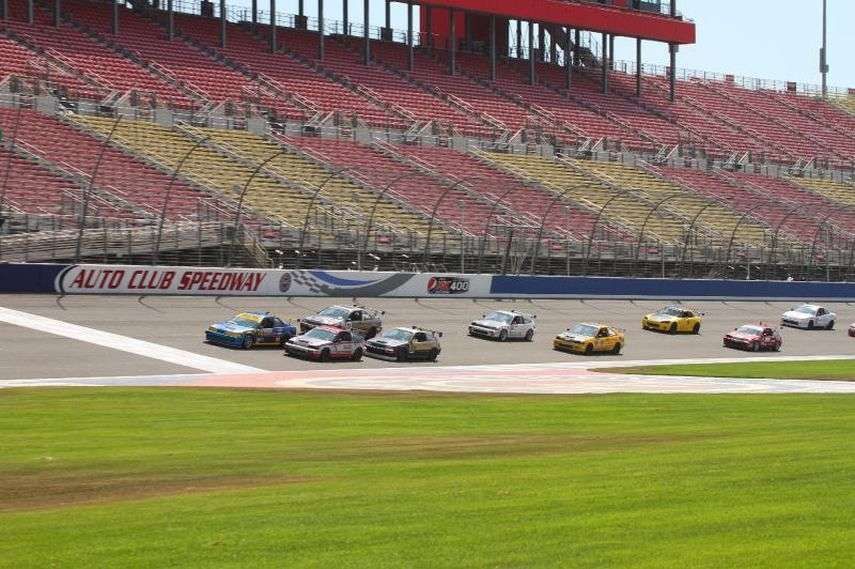 Open-wheelers, GT cars and others were using the combination of oval and infield road course

At the infield road course track, which was reconfigured in 2001, Rolex Sports Car Series held its races from 2002 to 2005. The race was named Grand American 400. The Japanese Super GT championship also had one appearance at Fontana in 2004. It was an exhibition non-championship event during the week before Christmas of 2004.

The only professional race car driver who died at Auto Club Speedway was Greg Moore. He was killed in a crash during the 1999 Marlboro 500 CART. He slid off at the backstretch into the infield grass and hit the edge of the oncoming pavement, which caused the car to flip into a concrete retaining wall. After the incident, the track owners paved the backstretch of both Auto Club Speedway and its sister track Michigan International Speedway in an attempt to prevent similar accidents.

Except for racing, the Auto Club Speedway is also a popular filming facility. Parts of some famous movies were filmed there, such as Charlie’s Angels (2000), Herbie: Fully Loaded (2005), and The Bucket List (2007). A parody of the track was also used in the 2006 Pixar film Cars.