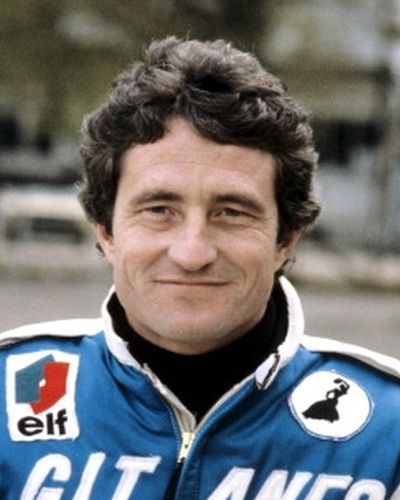 Patrick Andre Eugen Joseph Depailler was a racing driver from France who spent most of his career in the Formula 1 World Championship before being killed in a crash at Hockenheimring.

He was born in August 1944 in Clermont-Ferrand and when he broke into the world of Formula 1 became one of the most popular drivers among his colleagues and team officials, even after his off-road antics. He was one of those passionate drivers who competed purely for the thrill of racing but never was fortunate enough to have a proper car.

At the beginning of his career Depailler raced in both Formula 2 and sports cars championships, making guest appearances in the Formula 1. In 1972 he was a runner-up to Peter Gethin at Pau Grand Prix. The same year he drove two races for Tyrrell F1 team and finished 7th at the US Grand Prix, driving one of the team’s old cars.

That result wasn’t unnoticed but Depailler had to wait until 1974 for another chance in Tyrrell. He was named as one of the full-time drivers, alongside Jody Scheckter. His rookie season in the most popular motorsport championship was quite good. The highlight of the year was pole position at the Swedish Grand Prix. The Frenchman eventually finished 2nd in the race, losing to Scheckter. That year Depailler picked points on five more occasions before finishing 9th in the Drivers’ Championship.

The season of 1975 was pretty similar. The only podium finish he has scores was the 3rd place won at Kyalami circuit. For the second year in a row, Depailler finished 9th overall but it was clear that he has the potential for bigger achievements.

The 1976 Formula 1 season was the best in a career

In his third year with Tyrrell, Depailler finished 4th in the Drivers’ Championship, behind James Hunt, Niki Lauda, and his teammate Jody Scheckter. That was the highest position Patrick has achieved during his relatively short career. Driving the legendary six-wheeled P34, the French racer finished 2nd in five races that year while twice was 3rd. If he hasn't six retirements over the season, he probably could be a title contender, especially considering the fact that he picked points in each race that he has finished during the 1976 campaign.

Unfortunately, the following year wasn’t as good. Depailler again had too many retirements but also scored three podiums. He was 2nd in the Canadian Grand Prix, while in South Africa and in Japan. At the end of the season, Patrick was 9th in the standings.

In 1978, his last year with the Tyrrell, Depailler scored his maiden F1 victory. The start of the season was very good for the French driver who finished 2nd at Kyalami and 3rd in Buenos Aires and Long Beach. The Monaco Grand Prix was the 5th race of the season and Depailler managed to win the most prestigious event on the Formula 1 calendar. He did it in great style, beating the second-placed Niki Lauda by 22.5s.

Unfortunately, after the race in Monaco, Depailler retired from four consecutive races. Until the end of the campaign, he scored only thrice, with the 2nd position in Austria as the most notable result. He again missed the chance to be a title contender and had to settle for the 5th place in the Championship.

Move to Ligier and off-track accident

Before the 1979 season Depailler decided to move to the Ligier team, to drive alongside his compatriot Jacques Laffite. The 2nd position in the Brazilian Grand Prix and triumph in the Spanish Grand Prix at Jarama circuit soon after confirmed that move to Ligier was a good decision.

However, the situation overturned after the Monaco Grand Prix. Depailler broke both legs in a hang-gliding accident. The team was shocked and decided to fire Depailler due to the violated terms of the contract. In a meantime, Patrick went through the nightmare. For a long time there was the possibility of amputation and even after six months it was unclear whether he will be able to continue his career.

Wreck of Patrick's Alfa Romeo after the crash at Hockenheim

Recovery was followed by fatal crash

After long period Depailler finally recovered and before the start of 1980 season signed with the newly-formed Alfa Romeo team. The car was fast but unreliable and Patrick retired from 7 out of 8 races while he wasn’t classified in the South African Grand Prix.

On 1st of August 1980, Depailler was killed in a fatal crash at Hockenheimring while testing the car before the German Grand Prix. The suspension on his car failed and his car hit the barrier at the high-speed. Just a couple of weeks earlier, Depailler talked about poor safety measures on many tracks: "Today we are cornering so quickly that run-off areas and catch fences are necessary, really necessary. Without them, every mechanical failure would mean complete disaster. And surely no one would want that,“ stated the French F1 racer before becoming another victim of the ground-effect era.