Monaco Grand Prix - The most glamorous race in the world

The Monaco Grand Prix is one of the most important races in the world and definitely the most prestigious race on the Formula 1 calendar.

Part of the Triple Crown of Motorsport

The race was held for the first time in 1929 and over the decades was established as one of the season highlights. Together with Indianapolis 500 and 24 Hours of Le Mans, the Monaco Grand Prix forms the Triple Crown of Motorsport. Legendary Graham Hill is the only driver who was able to win it so far and it is very likely that he will stay the only one for many more years. 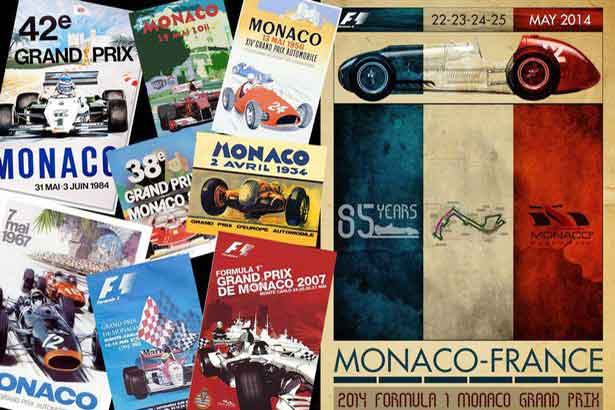 The race on the streets of Monaco always was tough and technically demanding for both cars and drivers.  The narrow and twisty circuit doesn’t allow many opportunities for overtaking so the qualifying often plays an extremely important role. Interestingly, the Monaco Grand Prix is also a home race for many F1 drivers who live there because of a tax haven.

The first Monaco Grand Prix was held on 14th of April 1929. The race organized by Automobile Club de Monaco was an invitation-only event and was won by the British driver William Grover-Williams in Bugatti. During the World War 2, Grover-Williams was a special agent who worked for SOE inside France. 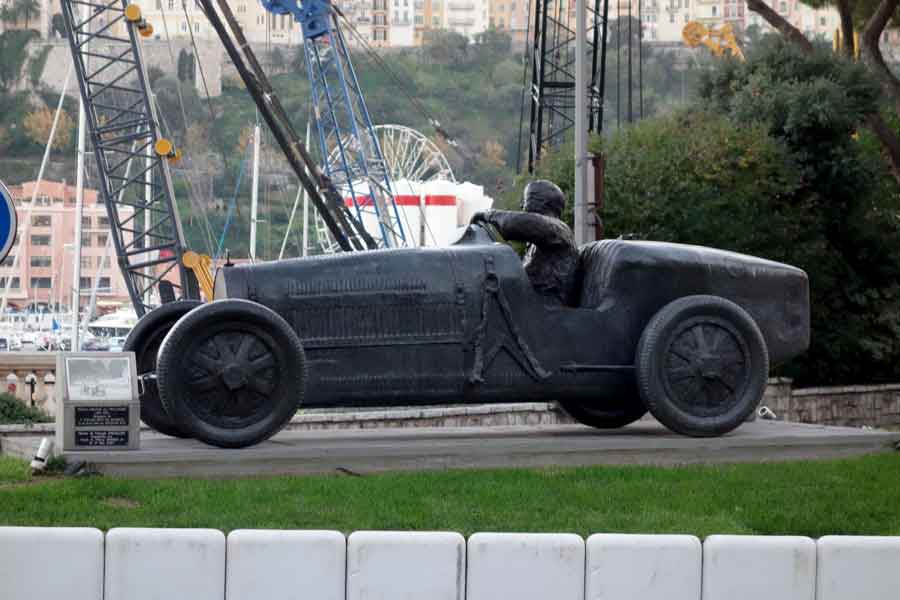 Monument of William-Grover Williams in Monaco

Over the years, the Monaco Grand Prix attracted all leading manufacturers and drivers, so during the pre-WW2 era among the winners were Louis Chiron, Tazio Nuvolari, and Rene Dreyfus. From 1935 to 1937 the Monaco Grand Prix was part of the European Championship and each of three races was won by the Mercedes drivers Luigi Fagioli, Rudolf Caracciola, and Manfred von Brauchitsch. 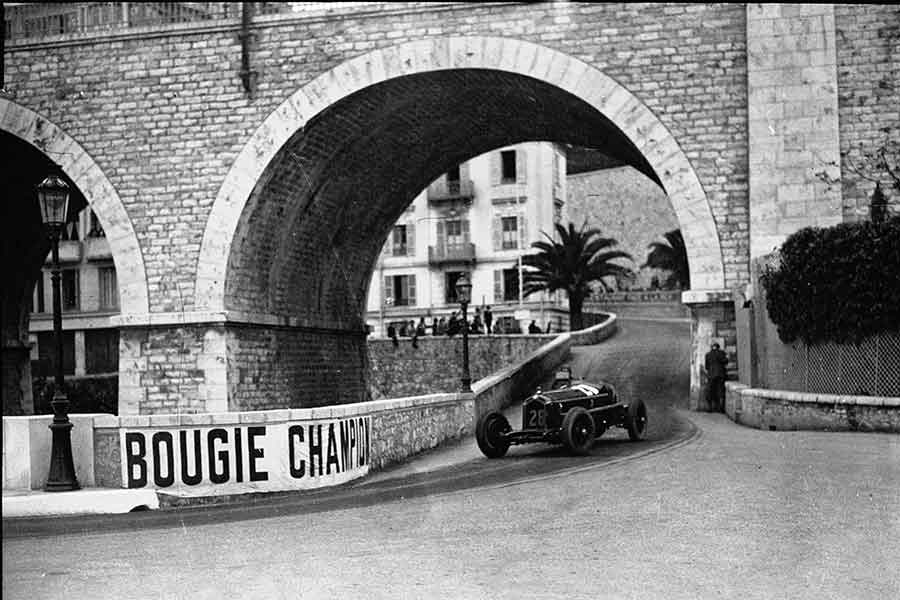 From 1938 to 1947 the race wasn’t held but was reestablished in 1948 when the winner was Giuseppe Farina in Maserati. The 1949 event was canceled due to the death of Prince Louis II while in the following year was included in the newly-formed Formula 1 World Championship. The winner was Juan Manuel Fangio in Alfa Rome and interestingly that was his maiden victory in the series.

Regular on the Formula 1 calendar since 1955 Maserati drivers Stirling Moss and Juan Manuel Fangio won the following two races while Trintignant and Jack Brabham in Cooper-Climax were the winners in 1958 and 1959 respectively.

Graham Hill dominated during the 1960s

Although Stirling Moss won the races in 1960 and 1961 driving a Lotus-Climax, that decade of the Monaco Grand will be best remembered after fascinating Graham Hill. The British driver won on five occasions and earned his place in the history of motorsport. He scored three consecutive wins from 1963 to 1965 driving for BRM, while in 1968 and 1969 he won as a driver of the Lotus team. 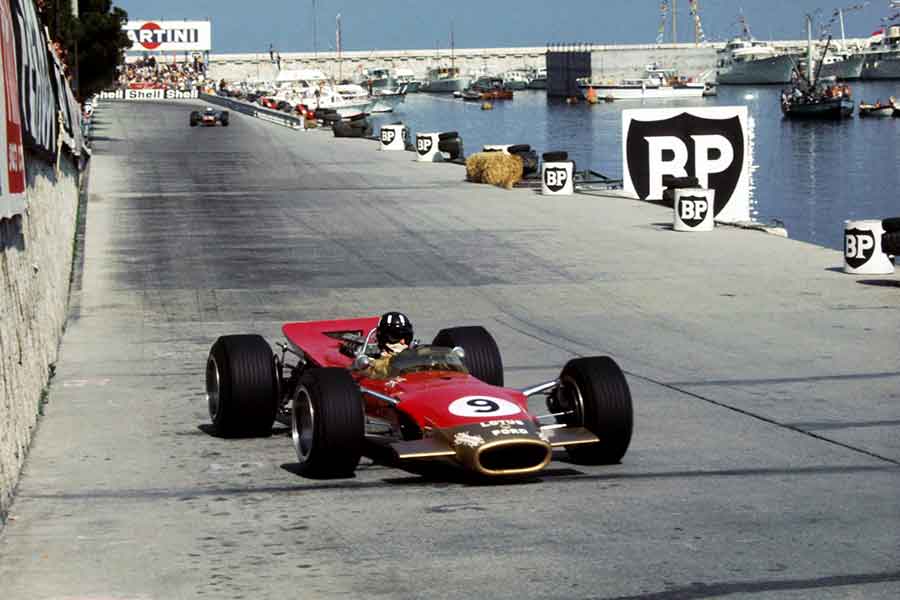 Interestingly, the other winners of the Monaco Grand Prix during the 1960s were drivers from New Zealand. Bruce McLaren won the 1962 race driving a Cooper-Climax while in 1967 Denny Hulme won driving the Brabham-Repco car.

Safety measures became more important so the Monaco circuit went through many modifications before the 1970s as it was one of the most dangerous tracks. Over the years many spectacular crashes had happened at Monaco circuit, including the ones of Alberto Ascari and Paul Hawkins who ended up right in the into the Mediterranean sea because there weren’t any barriers on the road. 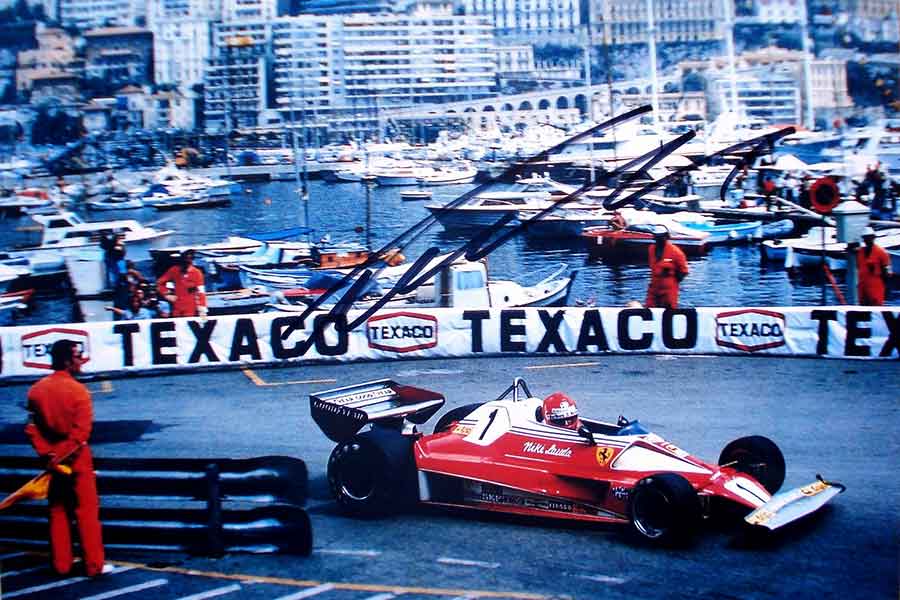 The 1970s probably were the Golden era of the Formula 1 with so many superstars on the grid. During that period the Monaco Grand Prix definitely was established as the most prestigious F1 event. Jackie Stewart in Tyrrell (1971, 1973), Niki Lauda in Ferrari (1975, 1976), and Jody Scheckter as a driver of Wolf in 1977 and Ferrari in 1979, were the most successful drivers at Monaco Grand Prix during the 1970s. Interestingly, the French driver Jean-Pierre Beltoise in BRM scored in 1972 his only F1 victory.

Carlos Reutemann, Gilles Villeneuve, and Keke Rosberg were among the winners in the early 1980s. In 1984, Alain Prost scored his maiden victory at Monaco Grand Prix driving a McLaren and in the following two years “The Professor” also won the race, equaling the record of Graham Hill. Winning streak of the French driver was ended in 1987 when Ayrton Senna in Lotus won the race but Prost, again driving a McLaren, fought back in 1988 what was his fourth and the last victory in Monaco. 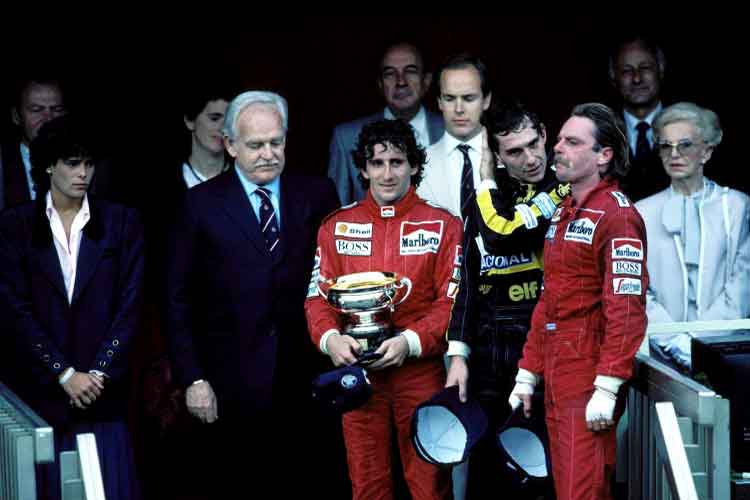 In 1989, Senna won for the second time, now as a driver of McLaren, what was the beginning of his supremacy in the Monaco Grand Prix. The Brazilian did something that hardly can be repeated in the foreseeable future.

The legendary Brazilian won the races from 1990 to 1994, all driving a McLaren cars, setting the new record of five consecutive victories at Monaco Grand Prix. With six wins on his account, Senna still stands as the most successful driver in the history of the race by the Mediterranean sea. 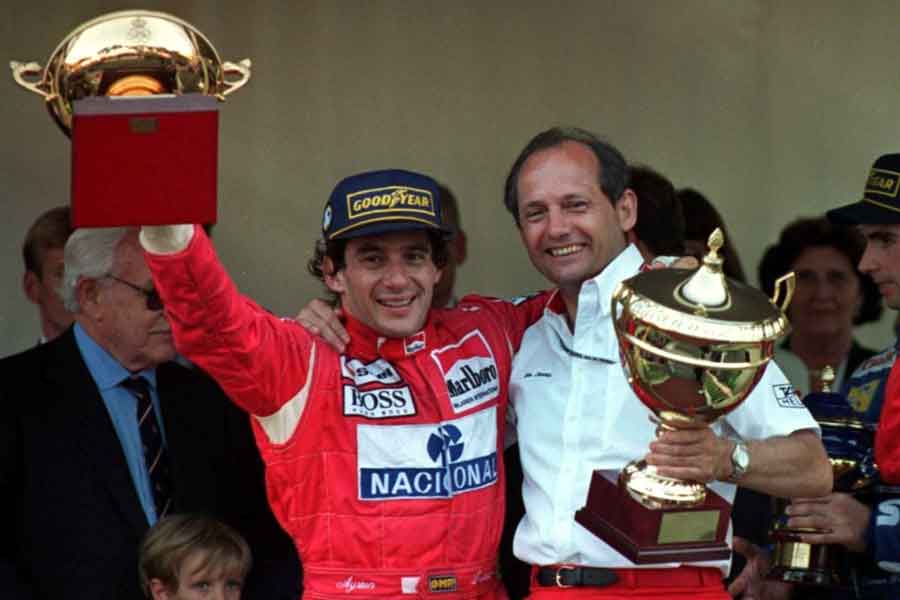 After Senna’s death in 1994, a new name appeared, ready to surpass the glory of the Brazilian. Michael Schumacher in Benetton won the races in 1994 and 1995, while in 1997 and 1999 he won driving a Ferrari. Olivier Panis in Ligier triumphed in 1996 what was the only victory in his F1 career and the last of Ligier team. It was one of the strangest races in the history of Monaco Grand Prix. Panis started from P14 but won the race that only four cars were able to finish. 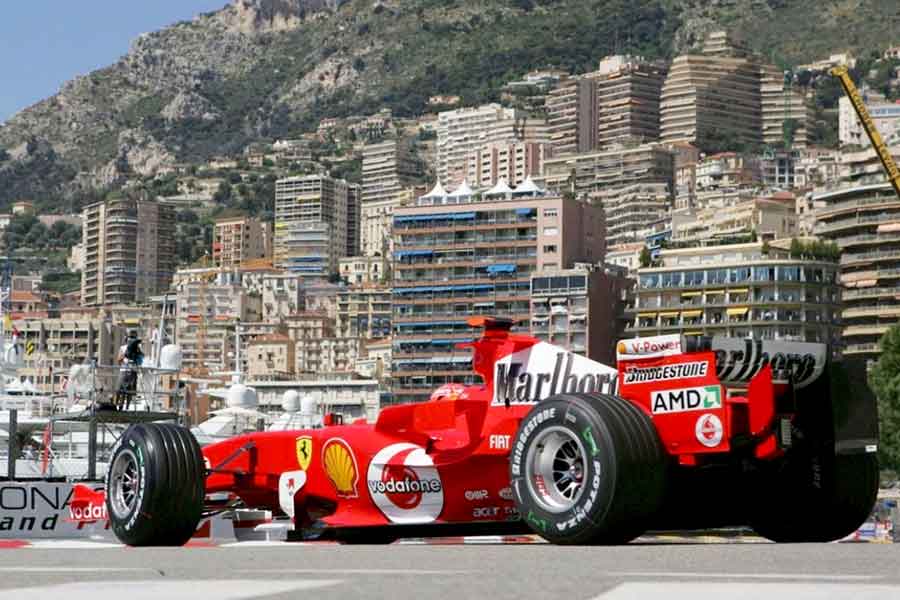 Michael Schumacher is a four-time winner of Monaco Grand Prix

New names for the new century

Michael Schumacher in Ferrari won for the 5th time in 2001 what was his last triumph in the Principality. In the first decade of the 21st century only Fernando Alonso was able to win more than once – in 2006 driving a Renault and in 2007 behind the wheel of McLaren. 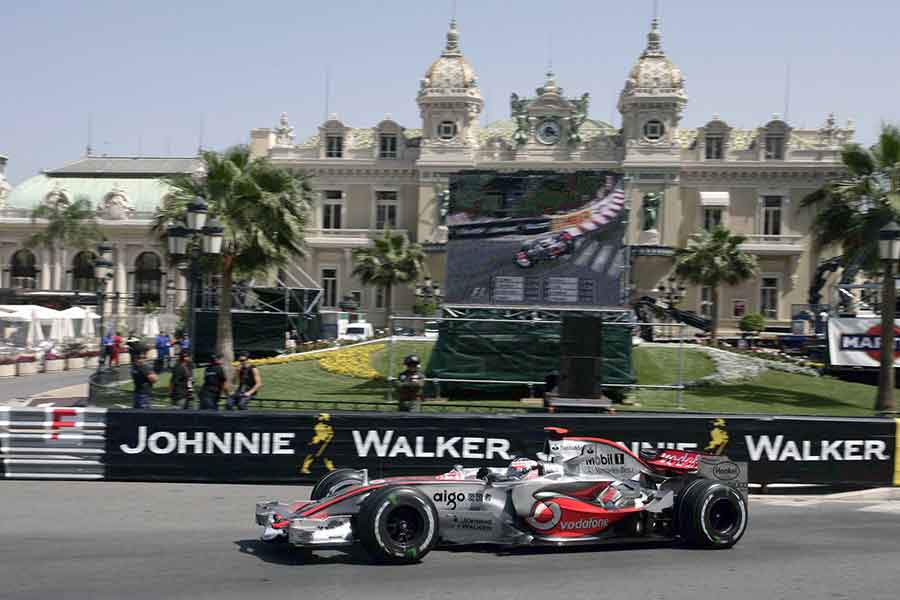 In 2004 Jarno Trulli surprised by winning the race for Renault. That was the first and only F1 victory for the Italian driver. Juan Pablo Montoya, David Coulthard, Kimi Raikkonen, Lewis Hamilton, and Jenson Button also were among the winners of Monaco Grand Prix. 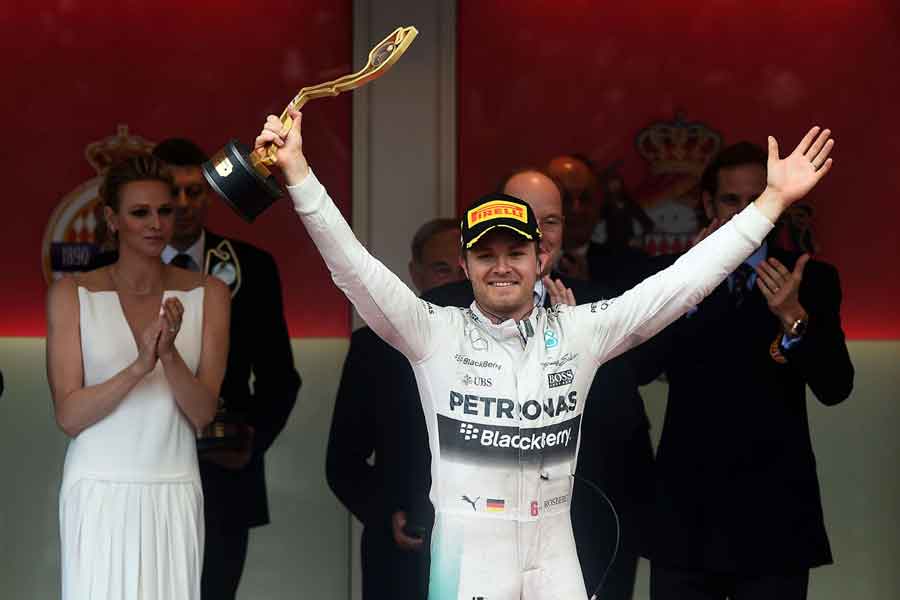 The Red Bull Racing drivers dominated the race from 2010 to 2012. Mark Webber won twice while Sebastian Vettel triumphed once. From 2013 Mercedes is dominant manufacturer at Monaco Grand Prix. Nico Rosberg became the 4th driver who was able to score three consecutive wins in the history of the race after being the fastest from 2013 to 2015. His teammate Lewis Hamilton ended that streak in 2016.

Victory at Monaco Grand Prix always was one of the priorities of most Formula 1 drivers but many famous champions never were lucky (or good) enough to win the most prestigious event. Jim Clark, Emerson Fittipaldi, Nelson Piquet, James Hunt, or Nigel Mansell never won in Monaco. Piquet once commented that a win there was worth two anywhere else and we just can to believe him.