After retiring from a professional racing career, he was successfully leading some racing teams (Euronova Racing and Vincenzo Sospiri Racing) with many wins and titles.

Born in October 1966, in Forli in northern Italy, Sospiri started racing at the age 15. He soon became the world-class karting driver, winning numerous championship titles in Italy, Switzerland and Europe. The highlight was the World championship Class 100cc title in 1987.

After that, it was a time to step in into competitions with big single-seaters. The first choice was the 1988 British Formula Ford Championship, in which Sospiri finished third. He won the annual Formula Ford Festival.

The British Formula 3, Formula Vauxhall Lotus and Formula Opel Lotus Euroseries were next championships for Vincenzo in 1989.

In 1990, Sospiri also made his debut in the Formula 3000 International, driving for with Eddie Jordan Racing at Jerez. Next year, he joined the team as the full-time driver in the Formula 3000, with Damon Hill as a teammate. Sospiri finished 8th in the points, one place behind Hill.

Sospiri wasn't satisfied with uncompetitiveness of his car and he left series in 1991, making a step back to the Italian Formula 3. He finished fifth driving for Traini Corse team.

Returning to F3000 and taking the championship title in 1995

In 1993, Sospiri returned to the Formula 3000, driving the #32 Reynard-Judd for Mythos Racing. After scoring two podiums, he was seventh in the final standings. For 1994 season, Sospiri joined British Super Nova Racing, alongside Japanese driver Taki Inoue as a teammate. Sospiri improved his results, scoring three podiums and finishing fourth in the points.

And then, in 1995, he was a dominating driver in the championship, winning the F3000 title with a big gap over his teammate Ricardo Rosset. Sospiri was a race winner three times, at Catalunya, Pau and Spa.

After a victory in the F3000, the next step was supposed to be a Formula 1. There was no seat available for Sospiri in the 1996 Formula One season,  so he decided to serve as a test driver for the Benetton Renault F1 team.

Ahead of 1997 season, he joined Mastercard Lola project, together with former teammate Ricardo Rosset.  Unfortunately, the team's Lola-Ford was uncompetitive and they failed to qualify for the season-opening Australian Grand Prix. After that race, the team was closed down.

Having no place in Formula One, Sospiri traveled to America to joined Team Scandia in the 1996/1997 season of the Indy Racing League. He had a fantastic debut at Indianapolis 500, securing front-row start as the third-fastest qualifier and the best rookie. In the race, he finished 17th.

Later in the season, Sospiri recorded three top 10 results, including second place at New Hampshire International Speedway. In October and November, Sospiri also participated in two races of the Formula Nippon at Fuji and Suzuka. 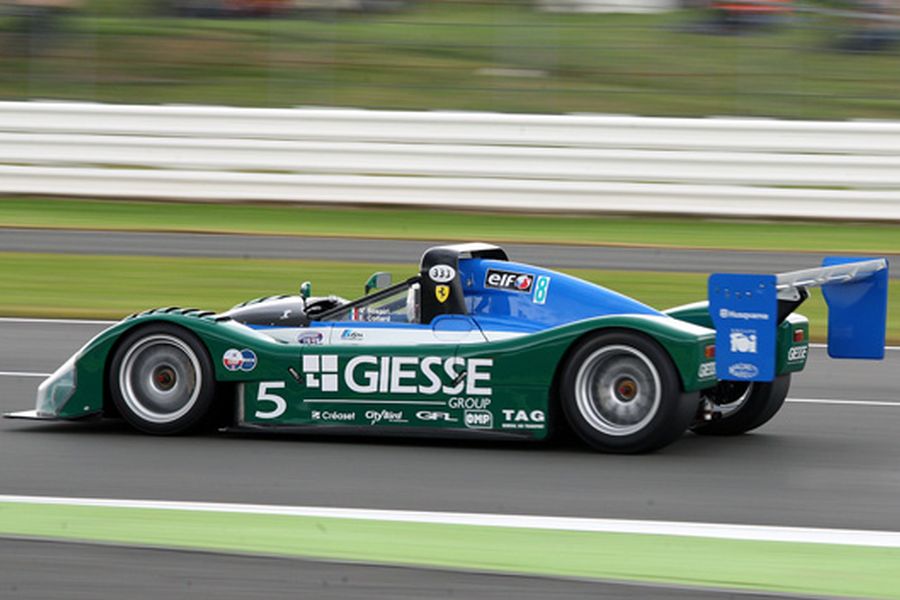 In 1998, Sospiri made a switch to sports car racing, participating full-season in the International Sports Racing Series with JB Giesse Team Ferrari. He and Emmanuel Collard were the race winners six times during a season in the #5 Ferrari 333 SP, dominantly taking a championship trophy.

In June 1998, Sospiri debuted at 24 hours of Le Mans, sharing the #5 Ferrari 333 SP with Jerome Policand and Jean-Christophe Boullion. They retired after 187 laps.

In September 1998, Sospiri was invited by Dan Gurney's All American Racing team to drive for the team in the last four rounds of the CART FedEx Championship Series as a replacement for P.J. Jones. Sospiri debuted in the #98 car at Grand Prix of Monterey at Laguna Seca, finishing 22nd.

He was then 15th at Grand Prix of Houston and at Honda Indy Carnival in Australia's Surfers Paradise. In the last race, at Californica Speedway, he finished 23rd.

In 1999, Sospiri stayed with JB Giesse Team Ferrari in the competition which was renamed to Sports Racing World Cup. This time, he and Emmanuel Collard scored two wins in the #1 Ferrari 333 SP but that was enough both for them and the team to defend championship titles.

In June, Sospiri was hired to drive for Toyota Motorsports at Le Mans 24 Hours, alongside Emmanuel Collard and Martin Brundle. Sospiri took the pole position in the #1 Toyota GT-One but Brundle was forced to retire after 90 laps.

With championship trophy in his hands, Sospiri retired from racing at the end of 1999. He reactivated himself shortly in 2002, in few races of the FIA Sportscar Championship, together with Mauro Baldi in the R&M SR01 prototype. They finished third in all three races, at Brno, Magny-Cours and Spa.

In 2003, Sospiri participated in one race of the British GT Championship and then, ten years after, he had an exhibition outing in the 2013 Formula Ford Walter Hayes Trophy.

After slowing down his racing activities, Sospiri focused on leading racing teams. His first project was the Euronova team, which he created in 2002 by joining forces with David Sears and Fortec Motorsport Italia. The team's first competition was the Euro Formula 3000. Euronova stayed in that series, which was running under a various name, until 2014.

Vincenzo Sospiri with his drivers