Kentucky Speedway - Home of The Best Sight Lines in NASCAR

Kentucky Speedway, located in Sparta, Kentucky, is one of the newest race tracks which hosted the events of three NASCAR national series and IndyCar Series. The 1.5-mile tri-oval speedway was opened in 2000. It was the venue of the IndyCar Series, NASCAR Truck Series and ARCA Series in the opening year. Since 2001, it hosted NASCAR Busch Series (now Xfinity Series) and finally, in 2011, the NASCAR Sprint Cup Series came to Sparta. 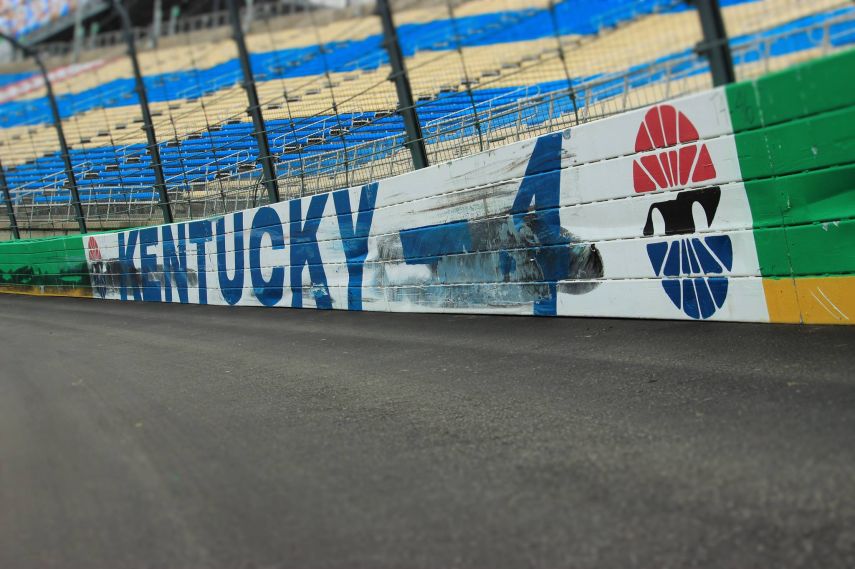 The race track in Sparta was born in 2000

The idea of a racing facility in Sparta, a village about 40 miles from Cincinnati, was presented in January 1998 by Jerry Carroll, who announced that he and four other investors would pay $153 million to build a speedway. The construction started in July 1998.

The 1.5-mile tri-oval speedway with four turns was finished in summer 2000. The seating capacity was 66,000. During the construction of the speedway, it was announced that NASCAR Truck Series, IndyCar Series and ARCA Series would have events at the new race track. But, the track was opened with a minor event, the Slim Jim All Pro Series race on June 16, 2000. The first ever winner at kentucky Speedway was Billy Bigley Jr.

The first major event followed a day later, on June 17. It was the Craftsman Truck Series race named Kroger 225. The first winner was Greg Biffle in the Roush Racing’s Ford. In August 2000, the inaugural IndyCar race took part at Kentucky Speedway. The winner was Buddy Lazier, ahead of Scott Goodyear, a poleman and the man who led for most of the race.

The Busch Series came to Sparta in 2001

For the 2001 season it was announced that the NASCAR Busch Series would include Kentucky Speedway to the calendar. The inaugural Busch Series race, named Outback Steakhouse 300, was held on June 16, 2001, and the winner was Kevin Harvick.

In 2005, as Jerry Carroll wanted to bring a Nextel Cup Series to Sparta, Kentucky Speedway filed an anti-trust lawsuit against NASCAR and the International Speedway Corporation (ISC). The lawsuit continued for three years. In January 2008, a judge dismissed the trial with NASCAR and ISC winning the lawsuit. 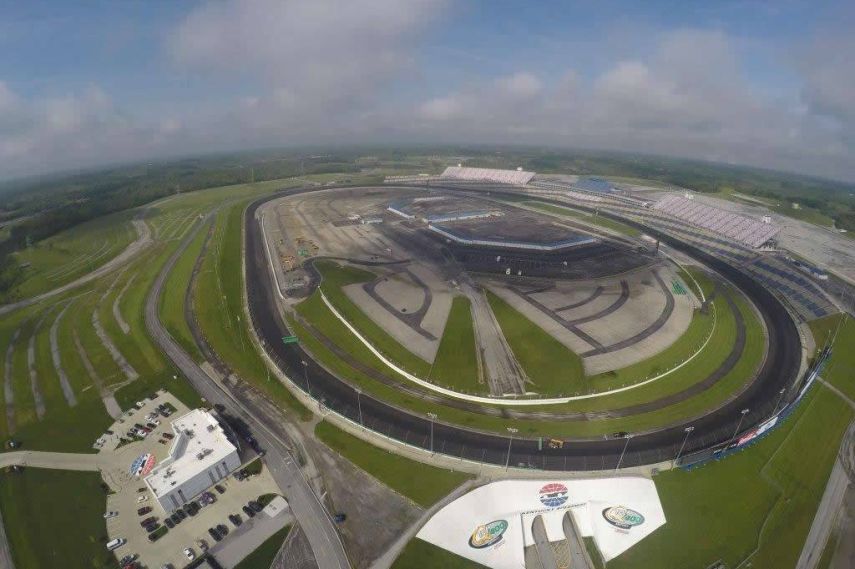 Aerial view of the Kentucky Speedway

The new owner of Kentucky Speedway since 2008

During May 2008, it was announced that Speedway Motorsports Inc. bought the race track. The Kentucky Speedway became the eighth member of the Speedway Motorsports Inc. family. Bruton Smith, the new owner, invested a lot of money because he wanted to bring a premier NASCAR series to the track in the next year. The investment featured the expansion of general parking areas, established more than 200 infield camping spots, augmented track access roads and enhanced the overall guest experience with new entrance areas along with a new restroom/bathhouse facility.

In 2011, Kentucky finally gets a Sprint Cup Series race

And finally, in August 2010, it was announced that the speedway would hold its inaugural Sprint Cup Series event during the 2011 season. Prior to that, the spectator capacity was extended to 107,000 seats and some other improvements were made on the speedway. 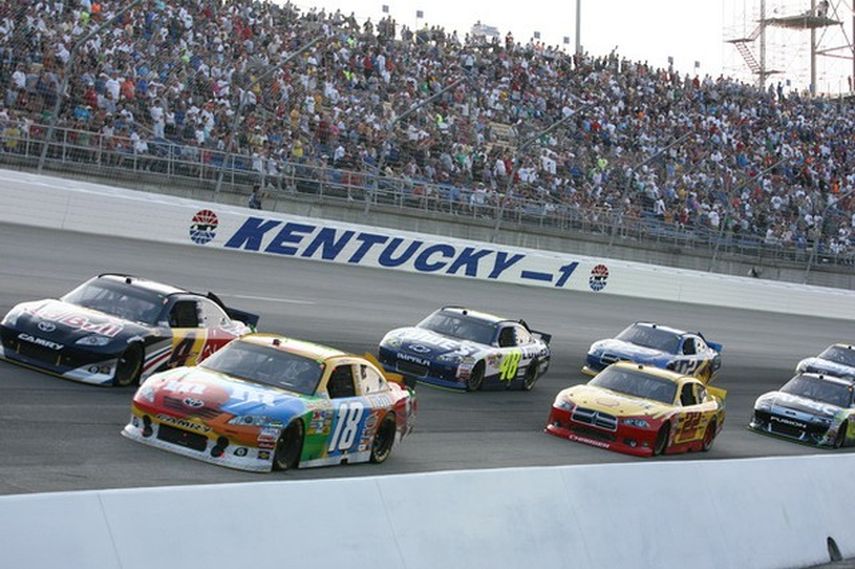 The inaugural Sprint Cup Series race, the Quaker State 400, was held on July 9, 2011. The winner was Kyle Busch. The race was overshadowed by logistical problems, such was a massive traffic jam on Interstate 71 which resulted in as many as 20,000 people being unable to get to the race. Speedway officials apologized and allowed those who didn’t get in to redeem their tickets at Speedway Motorsports’ other tracks for the rest of the season, or the 2012 Quaker State 400. Later in 2011, the speedway purchased an additional terrain to expand parking capacity.

Early in 2016, the one more improvement project started, with a pavement of the track and reconfiguration of the turns 1 and 2. The banking and width of turns 1 and 2 are changed, with the width of the track being narrowed from 72 to 56 feet and the banking increased from 14 to 17 degrees. Turns 3 and 4 remain 14-degree turns. The reconstructed speedway would again host four NASCAR races in 2016 – one race of Sprint Cup Series and Truck Series plus two races of the Xfinity Series. 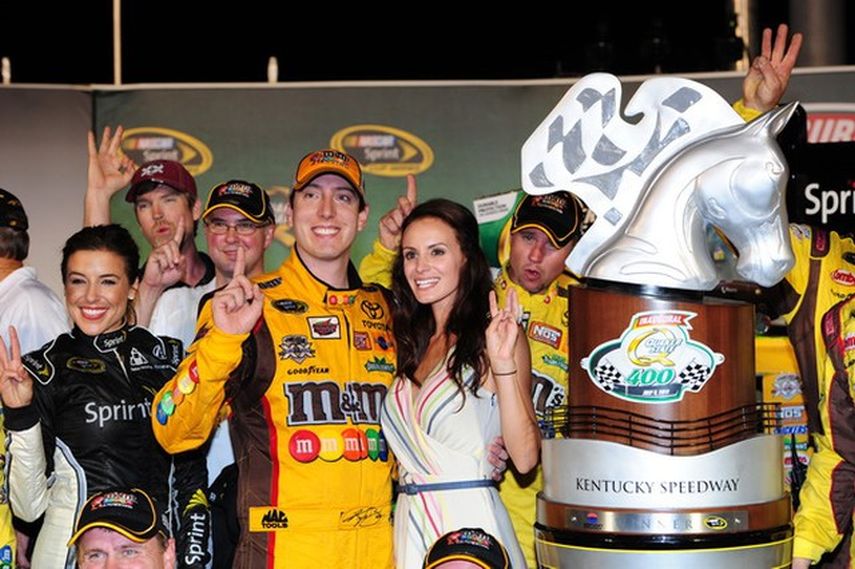 Of other drivers, Joey Logano is a three-time Kentucky winner in the Nationwide Series, with three consecutive wins from 2008 to 2010. Ron Hornaday Jr. has won three times in the Truck Series races (2006, 2009 and 2011).

Joey Logano was the youngest ever Nationwide winner

There were some notable races at the Kentucky Speedway, which would remain in the historic books. In 2008, when Joey Logano won, he was the youngest ever winner in the Nationwide Series history. He was 18 years and 21 days old. In 2006, David Gilliland won the Nationwide Series race in an unsponsored car, in the field full of Sprint Cup regular drivers. Many said it was the biggest upset in NASCAR history. 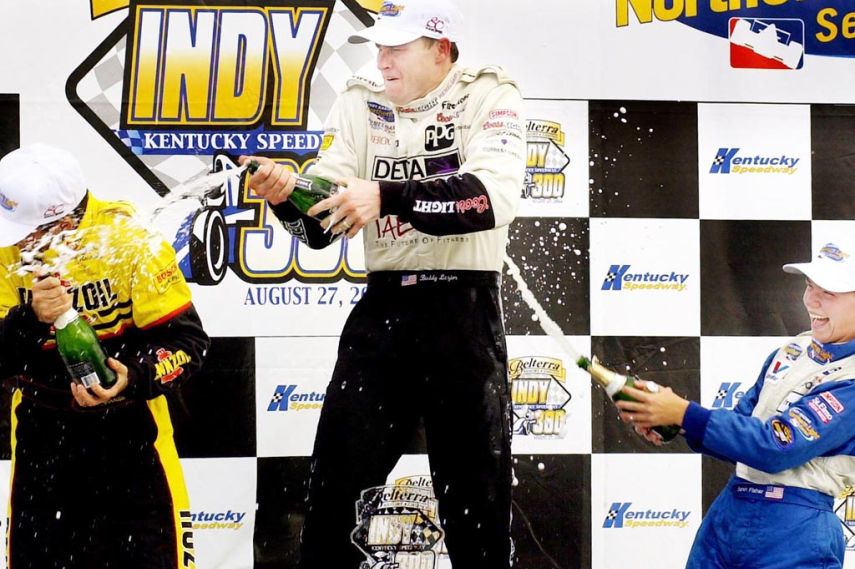 Sarah Fisher is the lap record holder for Kentucky Speedway

In the IndyCar Series, the inaugural winner Buddy Lazier scored one more victory a year later, in 2001. In 2002, Sarah Fisher won the pole position and set the fastest lap time, which is still the record of the Kentucky Speedway. Her record average speed was 221.390 miles per hour. The winner of the 300-mile race in 2002 was Felipe Giaffone.

The 2002 event was also marked by serious accident during the practice for the Infiniti Pro Series event (now Indy Light), when Jason Priestley, the famous actor, suffered a concussion and fractures to his thoracic spine and feet. 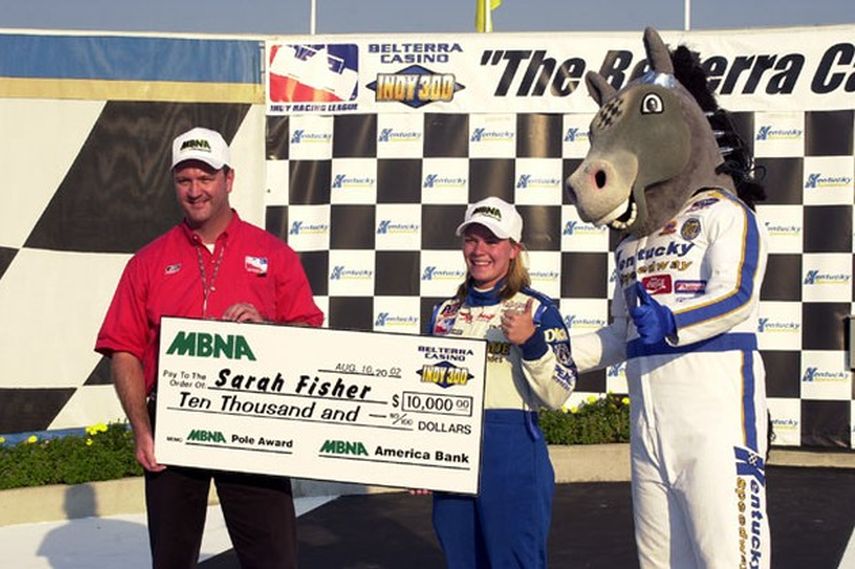 In 2005, Danica Patrick earned her first Kentucky Speedway pole award and became the second female competitor in track history to earn an IndyCar Series pole award. Patrick was awarded the top spot on the starting grid on the basis of combined practice times after traditional qualifying was rained out.