Mike Hawthorn (1929-1959) was a British racing driver, the first British Formula One champion (in 1958) and the winner of the 1955 24 Hours of Le Mans. He clinched the world title driving a Ferrari, while at Le Mans he won behind the wheel of a Jaguar. 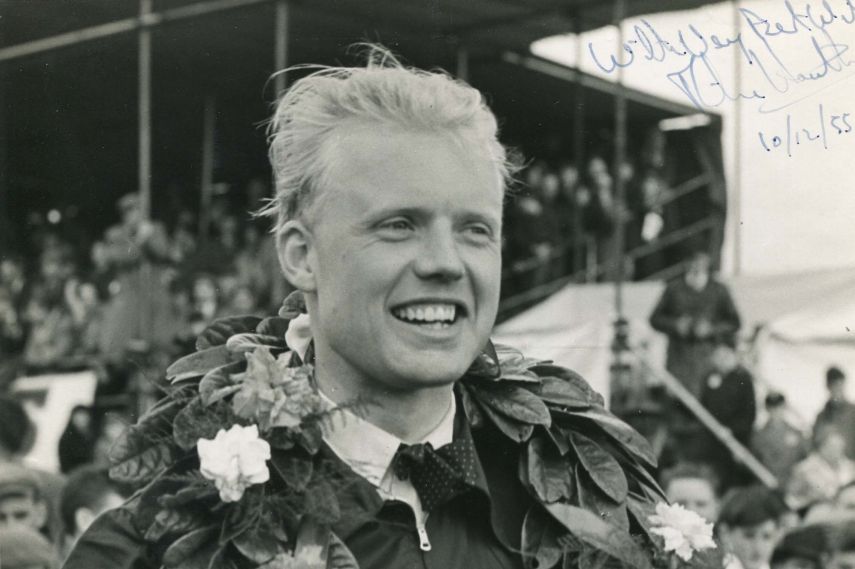 Hawthorn’s Le Mans victory was marked with the biggest tragedy in the history of motorsport, when more than 80 people were killed. Although Mercedes pulled out of the race after the incident, Jaguar’s team chief decided to continue and Hawthorn won the race.

Hawthorn’s 1958 Formula One title was also overshadowed with the death of his rival and teammate Luigi Musso at the French Grand Prix, which Hawthorn also won. 1950s were the deadliest times in racing, but Hawthorn managed to make his way through. He decided to retire from driving after his friend Peter Collins was killed at the 1958 German Grand Prix. However, his luck in avoiding fatal crashes and accidents had eventually abandoned him. He lost his life in January 1959 in a road car crash of his Jaguar and Mercedes-Benz 300SL. 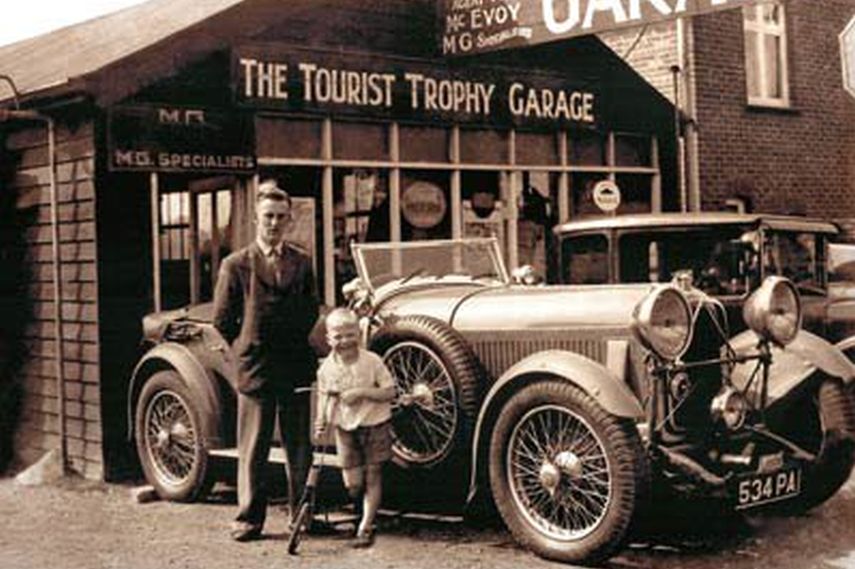 Six year-old Mike and his father

A close connection with cars from the beginning

But, let us go back in time and begin the story with his birth. Mike Hawthorn was born on April 10th, 1929, in Mexborough (Yorkshire, England). His father Leslie owned the Tourist Trophy Garage in Farnham, franchised to supply and service several high performance brands including Jaguar and Ferrari. Leslie Hawthorn raced motorcycles and Mike was infected with racing from his early days. Mike’s father also died unfortunately in a road accident in 1954.

Mike Hawthorn made his competitive debut in September of 1950, winning the 1100cc sports car class at Brighton Speed Trials with his 1934 Riley Ulster Imp. During the following year, he raced at various Trophy races around England, and in 1952, he switched to single-seaters.

With the Bristol-powered Cooper T20, he won his first Formula Two race at Goodwood, driving the same car he was using at his Formula One debut at the 1952 Belgian Grand Prix at Spa-Francorchamps. He finished fourth behind three Ferraris belonging to Nino Farina, Alberto Ascari and Piero Taruffi. 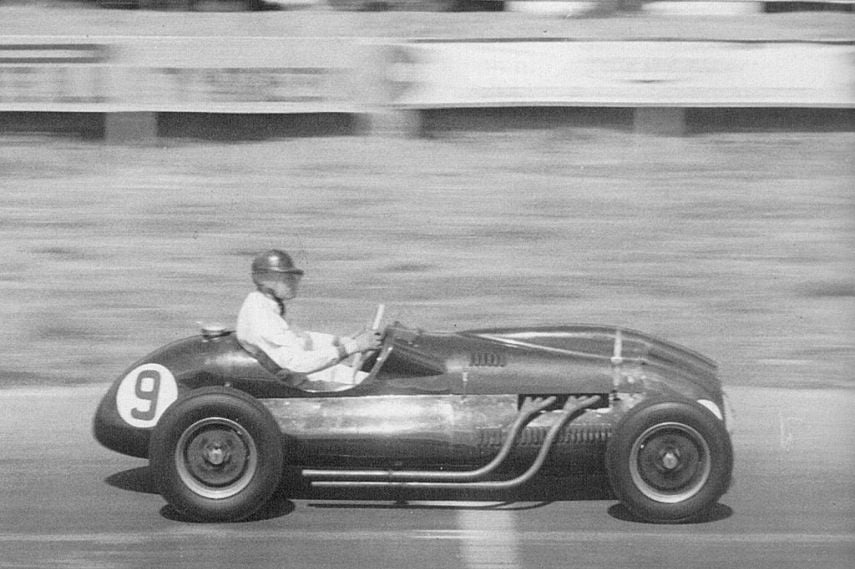 Race of the century: one second gap after 500 km

The first podium finish followed in his third F1 race, at British Grand Prix. Good performances brought him attention of Enzo Ferrari, who hired Hawthorn for the 1953 season. Driving a Ferrari 500, Hawthorn scored his maiden F1 victory at the 1953 French Grand Prix.

Some dubbed it as the race of the century, because of the sixty lap battle between Hawthorn and Juan Manuel Fangio, with the drivers swapping the lead at virtually every corner on the Reims circuit. After 500 km of racing, Hawthorn won by one second, while the first four drivers were less than 5 seconds apart, making it a truly exhilarating and intense event for both the participants and the spectators.

With two more podium finishes, Hawthorn ended fourth in the championship. In 1953, he also won the BRDC International Trophy and the Ulster Trophy, as well as the 24 Hours of Spa-Francorchamps with his Ferrari team-mate Giuseppe Farina. Hawthorn and Farina also participated at 24 Hours of Le Mans, but they were disqualified after only 12 laps because of illegal refueling. 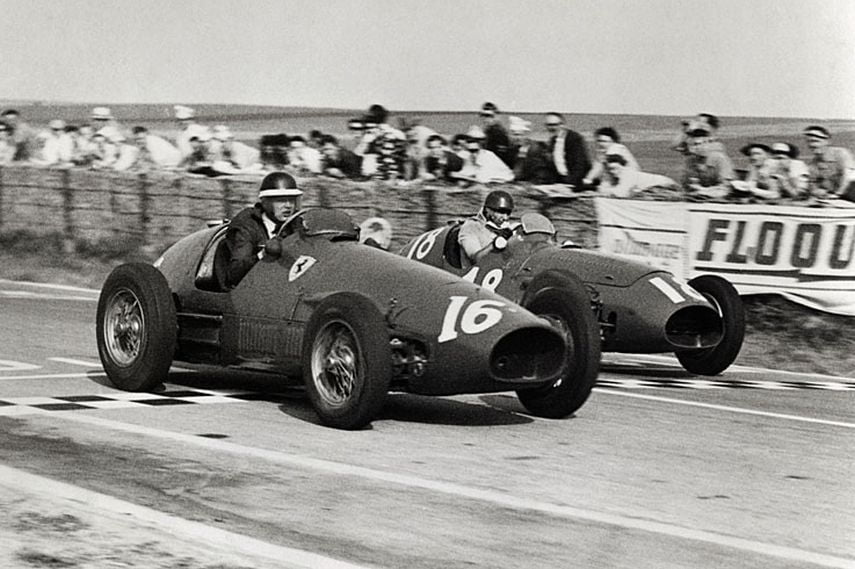 Third in the championship despite problems

In the opening race of the 1954 season, Argentine Grand Prix, Hawthorn got disqualified because of a push start. At the non-championship race Gran Premio di Siracusa he received bad burns in a crash. Despite all of those problems, Hawthorn finished third in the championship standings, with three podiums and one victory (Spanish Grand Prix).

After his father’s death, Mike moved to Vanwall

After the death of his father later in 1954, Hawthorn quit the Ferrari team to race for Tony Vandervell’s Vanwall team, as he needed to spend more time at the family garage. He was driving for Vanwall at the 1955 Monaco GP and the 1955 Belgian GP, but after two races, he decided to return to Ferrari. His F1 season wasn’t successful, because he earned practically no points, but 1955 brought him a victory and celebration at Le Mans, on the same event which became the the worst day ever in the history of racing. 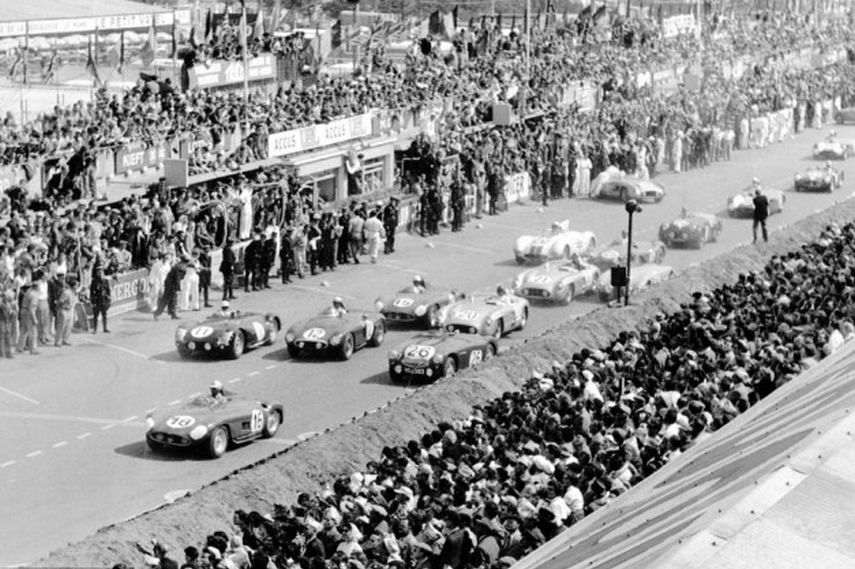 Hawthorn, riding in a Jaguar D-Type, was fighting for the lead with Fangio who was in Mercedes 300 SLR when the terrible accident happened. On Lap 35, Hawthorn passed Lance Macklin‘s Austin-Healey 100S while entering the final straight before the pits. Seeing the Jaguar crew signaling him for a pit stop, Hawthorn moved across Macklin’s path and braked hard to enter the pits.

Attempting to avoid Hawthorn, Macklin’s car swerved across the center of the track; Pierre Levegh‘s Mercedes-Benz 300 SLR came on and hit Macklin. The Mercedes went airborne into the crowd, killing 84 and injuring more than 200 people. Later in the race, while in the lead, the Mercedes-Benz team manager Alfred Neubauer called his cars into the pits and they retired. They asked the Jaguar team to do the same, but the Jaguar team manager Lofty England declined. Mike Hawthorn and Ivor Bueb securely won five laps ahead Aston Martin’s Peter Collins and Paul Frere. 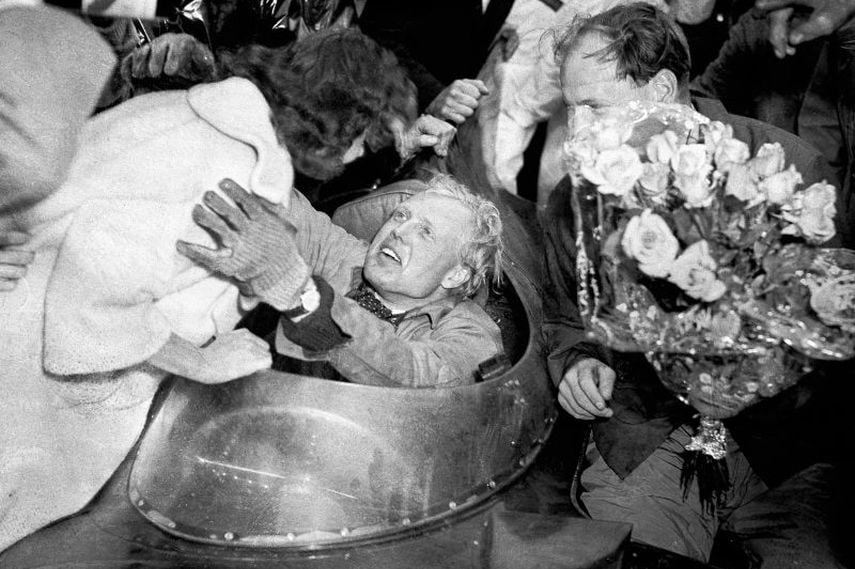 Hawthorn and Bueb participated at 24 Hours of Le Mans in 1956, securing the third place in class finish and sixth overall. In the Formula One 1956 season, Hawthorn drove just three races with three different cars – Maserati 250F, BRM P25 and Vanwall. He scored a third place finish at the Argentine Grand Prix and finished 12th in the championship standings.

For 1957, Hawthorn again teamed up with Scuderia Ferrari. He became friends with his teammate Peter Collins and they started a big rivalry with their third teammate Luigi Musso. After six races and two podiums, Hawthorn finished fourth in the standings, one place behind Musso. Two of them competed together for Ferrari at the 1957 Le Mans, but hadn’t reached the finish line. At the 1958 Le Mans, Hawthorn partnered up with Collins, but again retired. 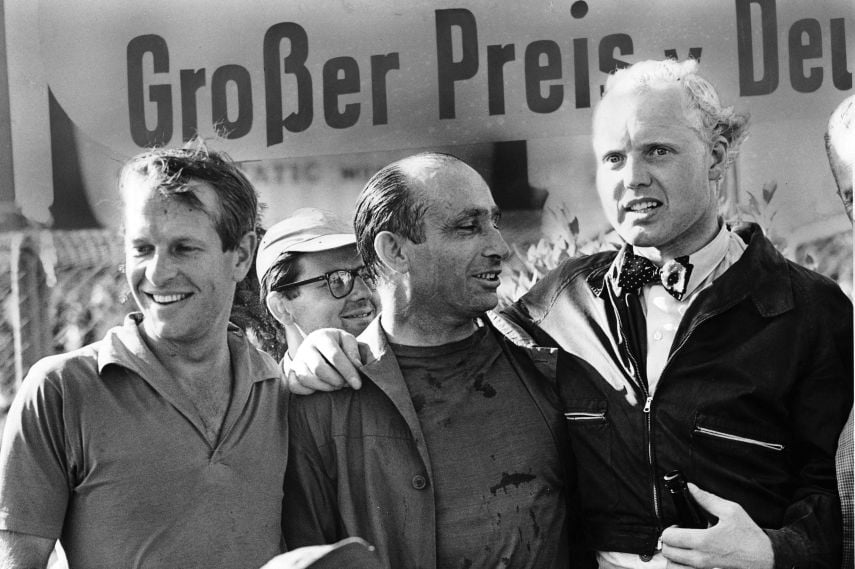 In the 1958 Formula One season, rivalry of the three Ferrari drivers continued, and their races sometimes went a bit overboard. Unfortunately, it resulted with the deaths of both Hawthorn’s teammates – Musso was killed at the French Grand Prix in July, while Collins died after a crash at the German Grand Prix in August.

Consistent results brought him a title

Hawthorn won the 1958 F1 title despite achieving only one win against four wins made by Stirling Moss. Hawthorn was consistent during the season and scored six more podiums, so at the end of the season he collected one point more than Moss.

Hawthorn’s last race, the 1958 Moroccan Grand Prix, was also marked by a fatal casualty. The victim was Stuart Lewis-Evans. He was the fourth driver who lost his life in the 1958 season, after Musso, Collins and the American Pat O’Connor at Indianapolis 500. 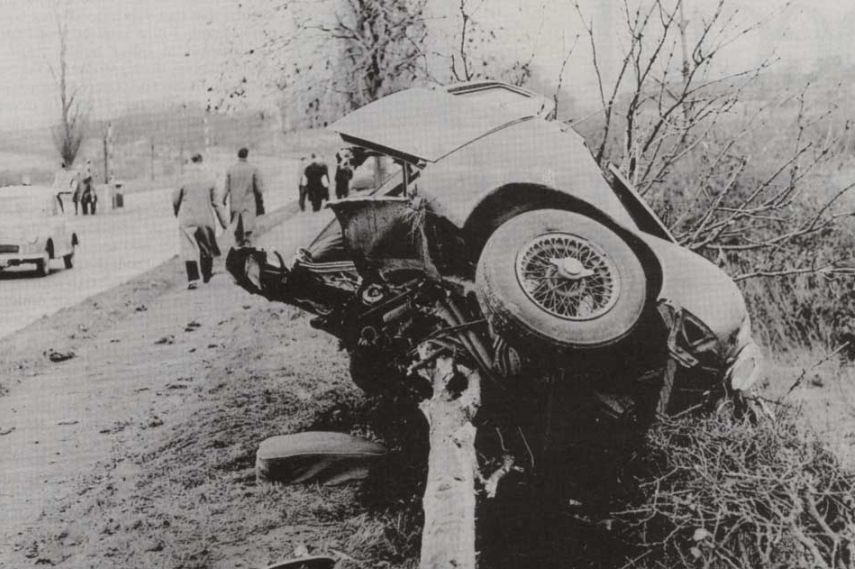 After winning the title, Hawthorn immediately announced his retirement from Formula One. He escaped from the dangers of racing circuits, but ultimately, couldn’t escape the danger of road racing. On January 22nd, 1959, he was driving his Jaguar 3.4 MkI and raced against a known team manager Rob Walker in Mercedes-Benz 300 SL. Hawthorn lost control of the car and crashed. Hawthorn’s injuries were fatal.

Hawthorn suffered from illness, died in a crash

In the time of death, Hawthorn had been very ill, because in 1955, he lost one kidney and had begun to suffer problems with the other kidney, and the doctors gave him only a few more years.

Although his Le Mans and Formula One titles were controversial (according to some), Hawthorn was adored in the UK and The Hawthorn Memorial Trophy has been awarded to the most successful British or Commonwealth F1 driver every year since 1959. 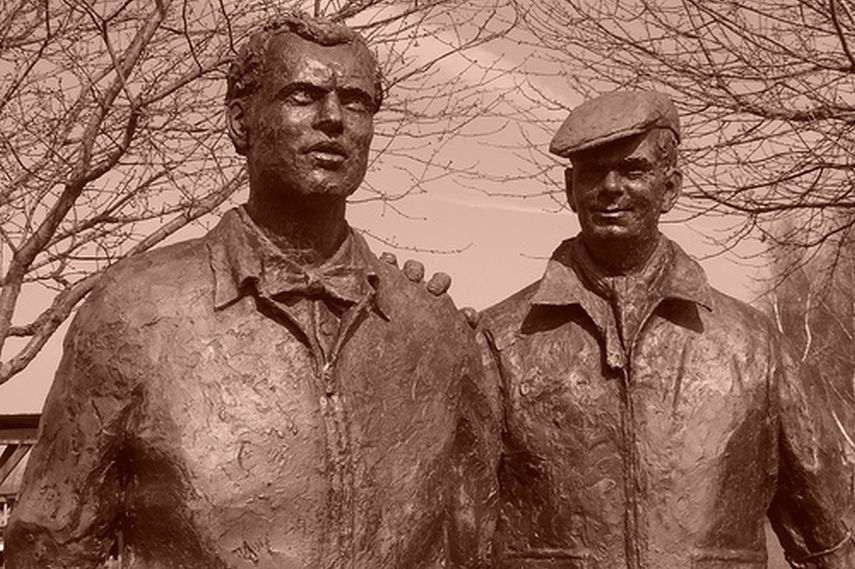 Statue of Mike Hawthorn and Lofty England at Goodwood

Video : A complete Le Mans lap with Mike Hawthorn in 1956!