The Mitsubishi Lancer Evolution III (or shorter Evo III) is a Group A rally car which brought the first World Rally Championship title to Mitsubishi, in 1996, when Tommi Mäkinen became the drivers’ world champion. That year, Mäkinen scored five WRC wins with Lancer Evo III and took his first out of four consecutive championship titles. Lancer Evo III debuted during the 1995 WRC season and it was in use for the season and a half in the WRC and then it was replaced by Lancer Evo IV in 1997. 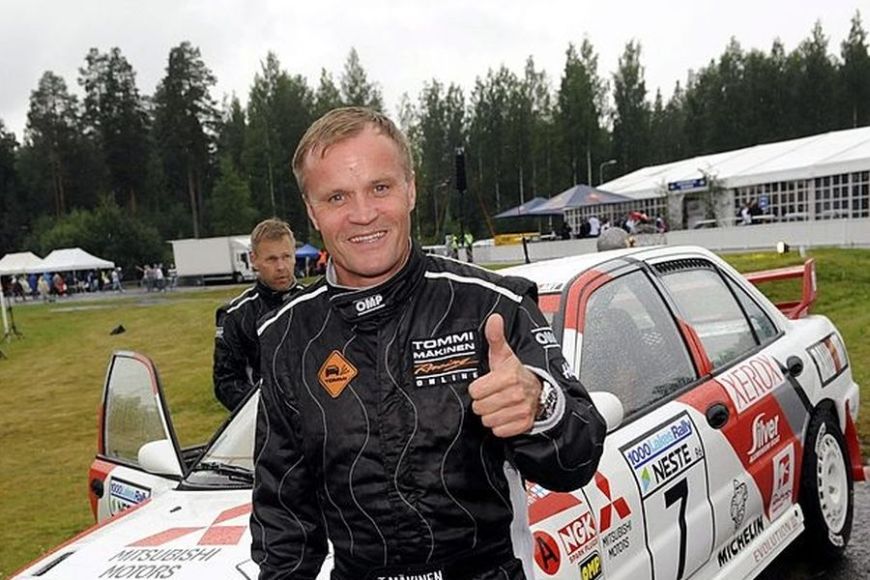 The first Lancer Evo came to WRC in 1993

All Evolutions had the same engine

Lancer Evo I was using AWD drivetrain from Galant, in combination with a 2.0L 4-cylinder turbocharged engine (factory name 4G63T) and 5-speed manual gearbox. In 1993, Eriksson scored only one podium and Mitsubishi finished fifth (out of five) in the manufacturers’ points. The Evolution II participated in the 1994 WRC season and then came the Evolution III in 1995. 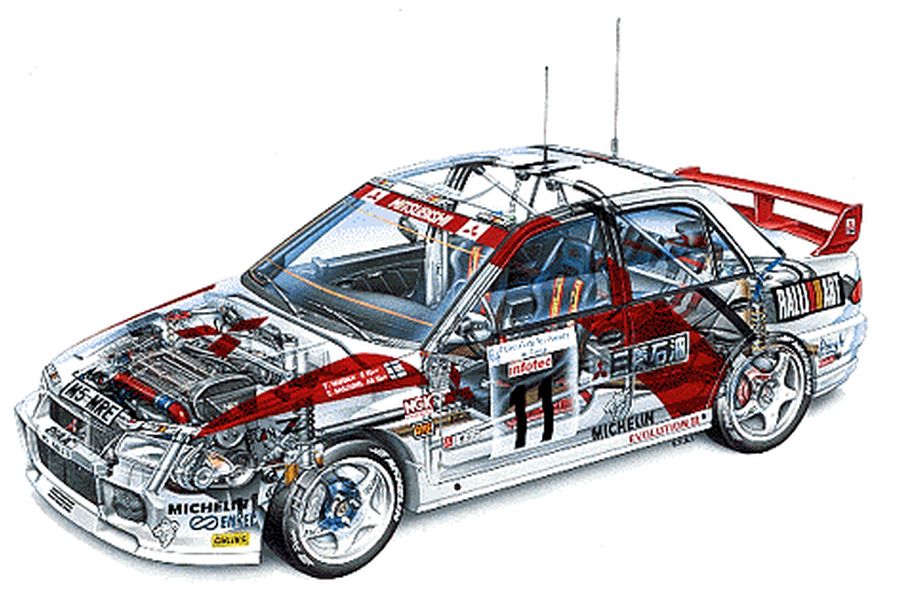 The third Evolution debuted in rallying in 1995

The Mitsubishi Lancer Evo III had several improvements in comparison to previous generations, including a more aggressive design with a big rear wing and a new nose/front bumper, which allowed better air supply, intercooler and brakes. The engine was the same (2.0L 4G63T), but it was improved and had more power than before, with 270 hp of power and 450 Nm of torque. The Group A rally car had the same power, but of course, it was much lighter than a street version.

Manufacturers’ and drivers’ APRC titles for Mitsubishi in 1995

In that period of time, the Japanese manufacturer was concentrated on Asia-Pacific Rally Championship, so the new Lancer Evolution III had its debut in the first round of the APRC, the Rally Indonesia in July, with Kenneth Eriksson and Staffan Parmander in the car. They finished in second place in debut race. Later in the season, Eriksson scored three APRC wins and brought both manufacturers’ and drivers’ titles to Mitsubishi. 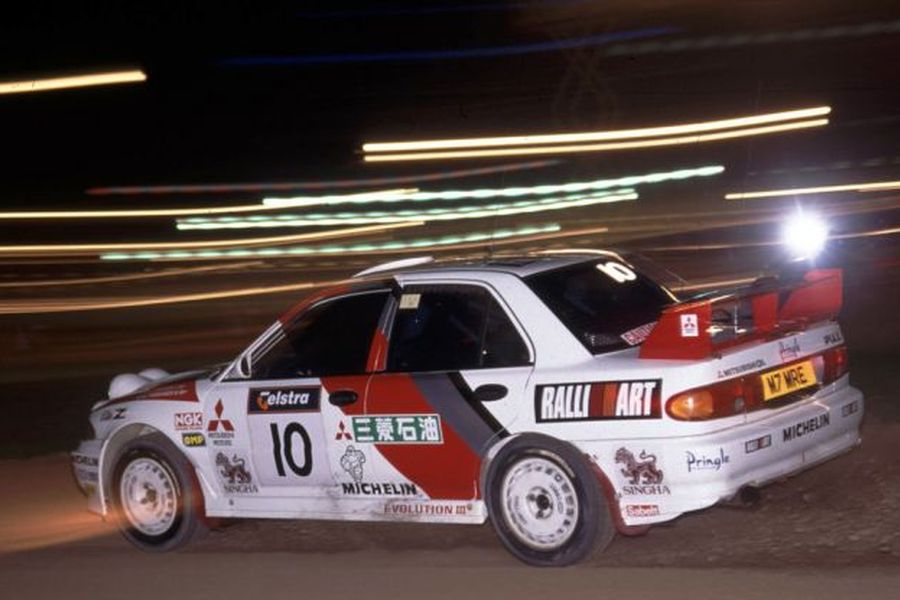 In the World Rally Championship, Lancer Evo III debuted at 1995 Rally New Zealand in July, with Eriksson finishing in fifth place and Tommi Mäkinen retired after an accident. The first victory came in the next round, at the Rally Australia. Kenneth Eriksson won the event, Makinen finished in fourth place.

In August, Mäkinen won the 1000 Lakes Rally, but it wasn’t a part of the WRC calendar, it counted for 2-Litre Championship only. The Australian victory was the only one for Mitsubishi in the controversial 1995 WRC season, which ended with Toyota’s exclusion from the race because of illegal turbo restrictors. Mitsubishi was second in the manufacturers’ points, Eriksson third and Makinen fifth in drivers’ standings. 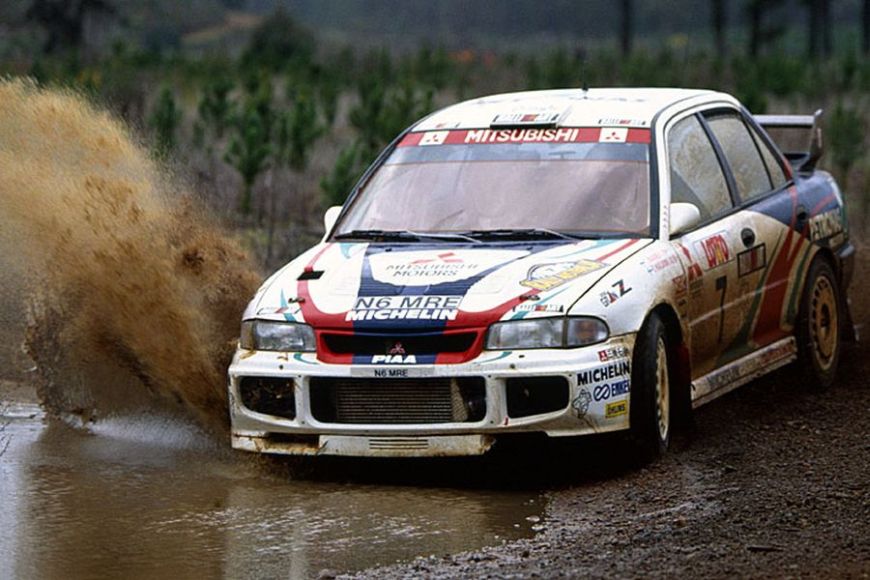 The #7 Mitsubishi Lancer Evo III of Tommi Makinen in 1996

The other Mitsubishi Ralliart’s driver, in the #8 Lancer, was Richard Burns, who participated in four WRC events, contributing to second place in the manufacturers’ standings. Burns was more successful in the Asia-Pacific Rally Championship, where he scored one victory and two podiums, bringing one more APRC manufacturers’ title to Mitsubishi. Burns finished in second place. 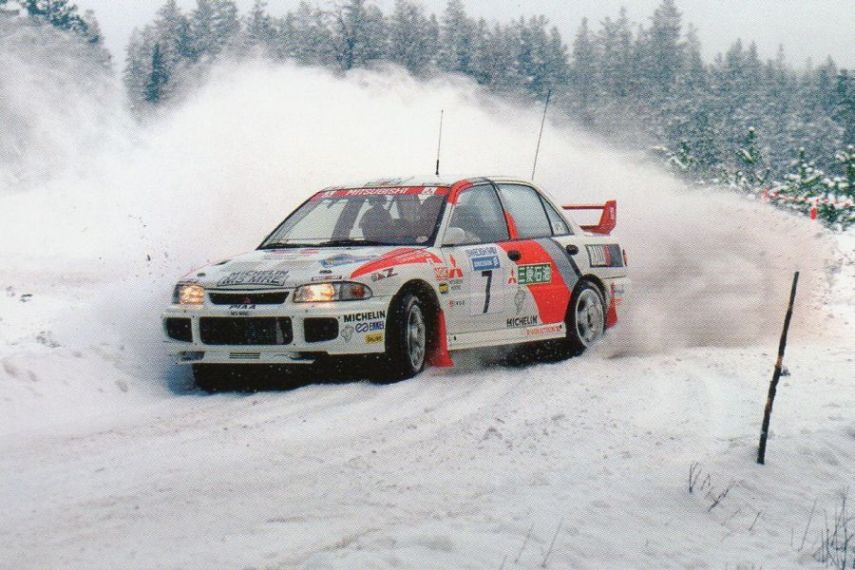 In 1996, Makinen has won five WRC events, including Swedish Rally

Three more titles with other Evolutions

With six WRC wins on its account, the competitive life of the Mitsubishi Lancer Evo III came to an end after the 1996 season, when Japanese manufacturer introduced the Evolution IV for the 1997 WRC season. A new car had a completely different layout, with an engine and transaxle that rotated 180 degrees.

Until 1999, Tommi Mäkinen captured three more world rally titles with three different evolutions of Lancer, but the Evo III will always be remembered as the first Mitsubishi that climbed on the top of the rallying world.