Mitsubishi Lancer WRC Remained in the Shadow of Its Predecessor

Mitsubishi Lancer WRC is a rally car which was in use in the World Rally Championship between 2001 and 2007 by Mitsubishi Motors and its motorsport division Ralliart.

The Lancer WRC is a successor of the extra successful Group A Lancer Evo rally car, which captured four WRC drivers’ titles in the hands of Tommi Makinen between 1996 and 1999, plus one manufacturers’ championship in 1998. On the other side, Lancer WRC wasn’t successful at all, scoring only three WRC podiums in seven seasons. 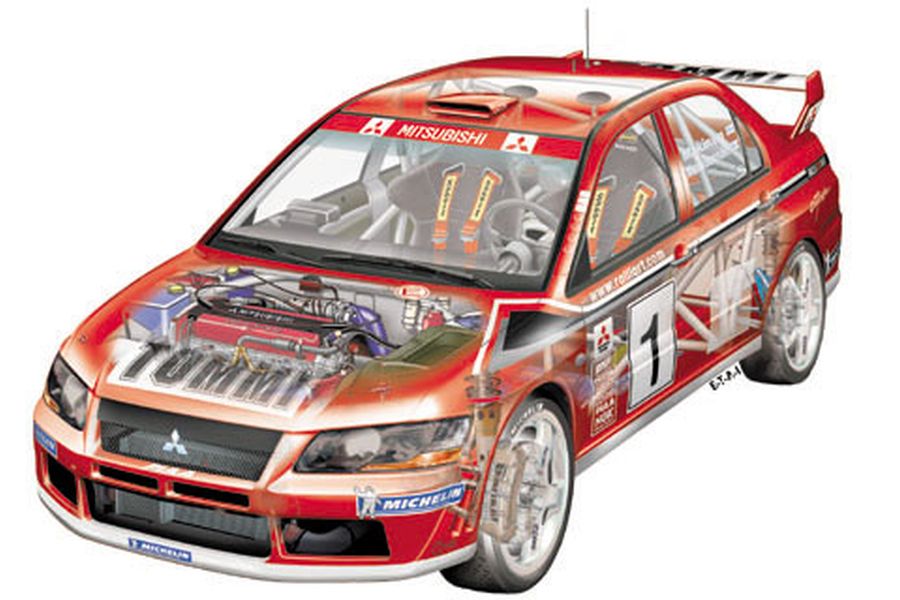 When the World Rally Car rules became active in 1997, Mitsubishi made an agreement to continue running the Group A Lancer Evolution against new WRC machines. Tommi Makinen won four consecutive drivers’ titles with different versions of the Lancer Evolution rally car. The last championship-winning car was the Lancer Evo VI in 1999. That car was also in use during 2000, being replaced by Lancer Evo 6.5 in 2001. Lancer WRC debuted in October 2001 at Rallye Sanremo, in the 11th round of the World Rally Championship. 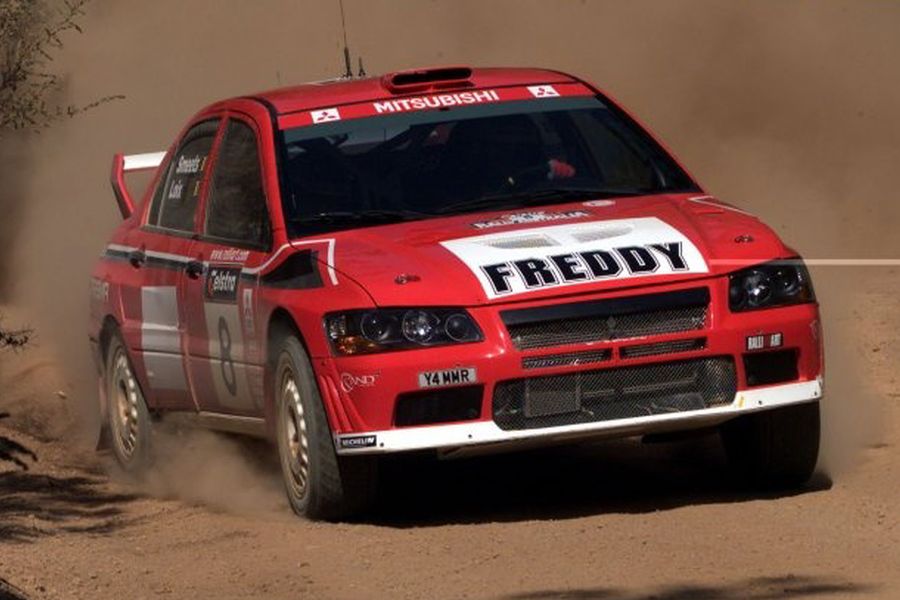 Freddy Loix was one of Mitsubishi’s drivers in 2001

Lancer WRC was using the same engine as Group A Lancer

The Lancer WRC was using the same 2.0-liter 4G63 engine that has been used in Group A rally car, with a power increased to 300 hp. Compared to Group A car, changes included modifications to the engine, new turbo, new exhaust system, lighter parts, optimized weight distribution and completely new front and rear suspension (McPherson). However, the drivetrain remained the same as before, with the 6-speed sequential gearbox and limited slip differentials.

Sixth place as the best result in debut season

Mäkinen managed to win three times in 2001 with Lancer Evo 6.5 before he debuted at Rallye Sanremo with #7 Lancer WRC. He lost a wheel and retired at the last special stage. Freddy Loix was driving the #8 car, finishing in the 12th place.

At the next event, Tour de Corse, Makinen had a heavy accident in which his co-driver Risto Mannisenmäki was injured, so he participated in the last two events with another two navigators. Makinen ended a race only at Rally Australia, finishing in the sixth place. Freddy Loix was 12th at Tour de Corse and 11th at Rally Australia. 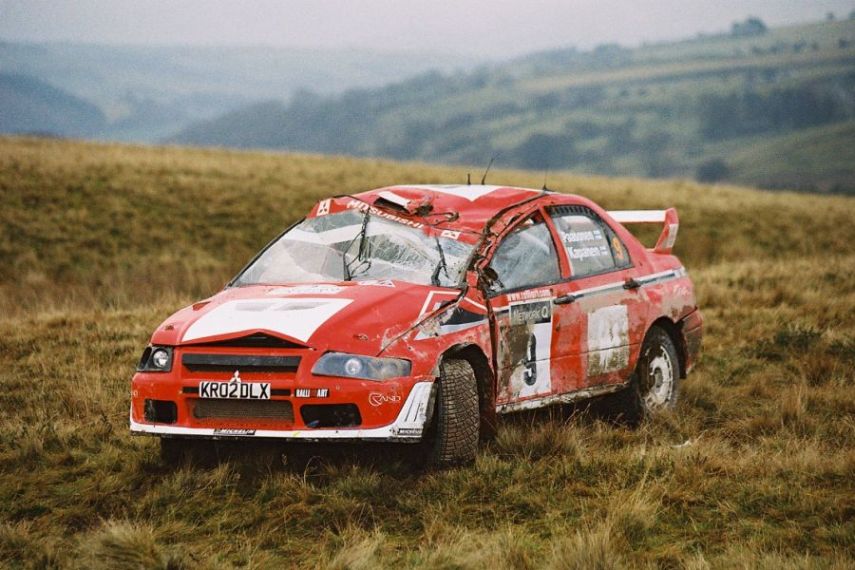 2002 – struggling season for Delecour and McRae

In 2002, both Makinen and Loix left the team, so Mitsubishi signed Francois Delecour and Alister McRae to drive two Lancer WRCs for points, with Jani Paasonen as a part-time driver in the third car.

Both Delecour and McRae struggled with the car, with McRae’s fifth-place finish at Rally Sweden as the best result. Those were the only two points they would score all season and Mitsubishi finished last in the manufacturers’ standings. 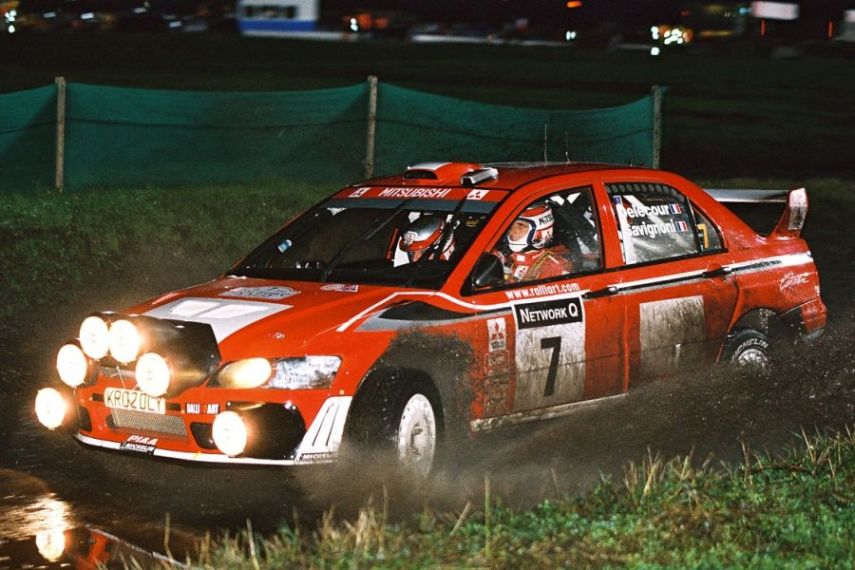 Lancer WRC2 was introduced during the 2002 season

During the season, at Rally Finland in August, Mitsubishi introduced improved car, the Lancer WRC2. It features the same 4G63 engine and 6-speed sequential gearbox, distributing power to all four wheels via front-, center- and rear- active differentials. 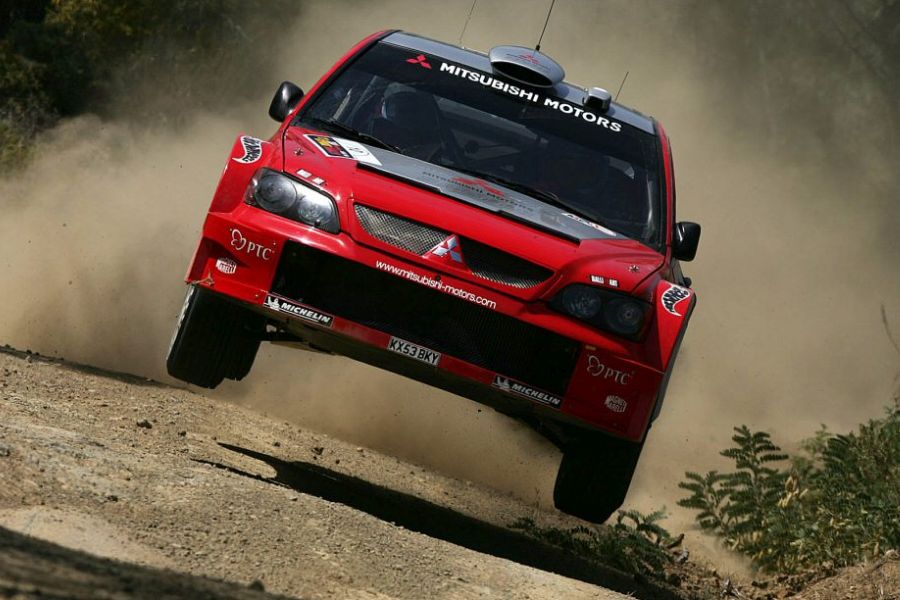 Lancer WRC04 came after a year off

Mitsubishi pulled out of the WRC at the end of 2002 season, to restructure their motorsports activities. During the 2003 WRC season, the Lancer WRC2 was used as a development car at selected events, with Alister McRae and Kristian Sohlberg as drivers. The best result was McRae’s sixth place at Rally New Zealand.

Mitsubishi returned to the championship in 2004, introducing the Lancer WRC04. Around 6000 changes were made compared to the Lancer WRC2. The engine stayed the same, mounted to a 5-speed semi-automatic transmission and a new all-wheel-drive system co-developed by Ricardo and MMSP (Mitsubishi Motors Motorsports). The bodywork was completely new, developed through the extensive aerodynamic testing in the wind tunnel. The most impressive was the rear spoiler. 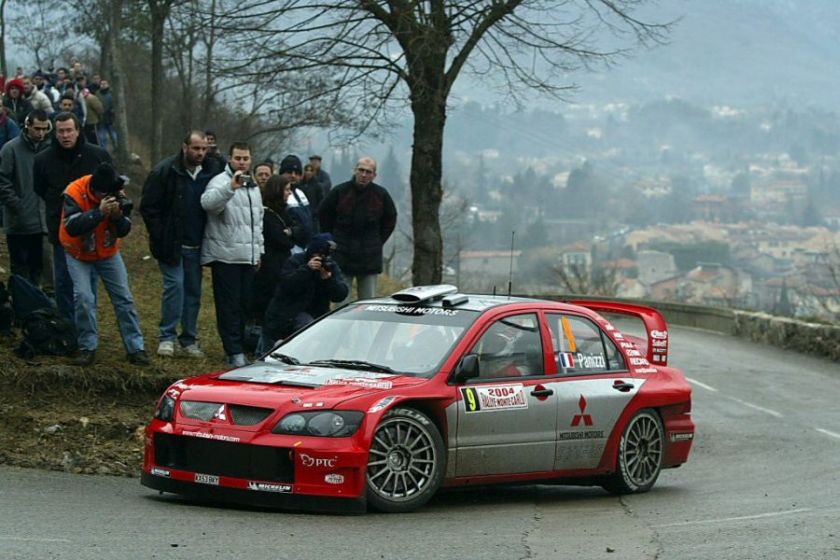 Promising results in the 2004 WRC season

For the 2004 WRC season, Mitsubishi signed Gilles Panizzi as leading driver in the #9 car, with Gigi Galli, Kristian Sohlberg and Daniel Sola sharing the #10 car. Panizzi managed to score points in three events before the team reduced its programme after ten rounds, switching their focus to developing a new car. 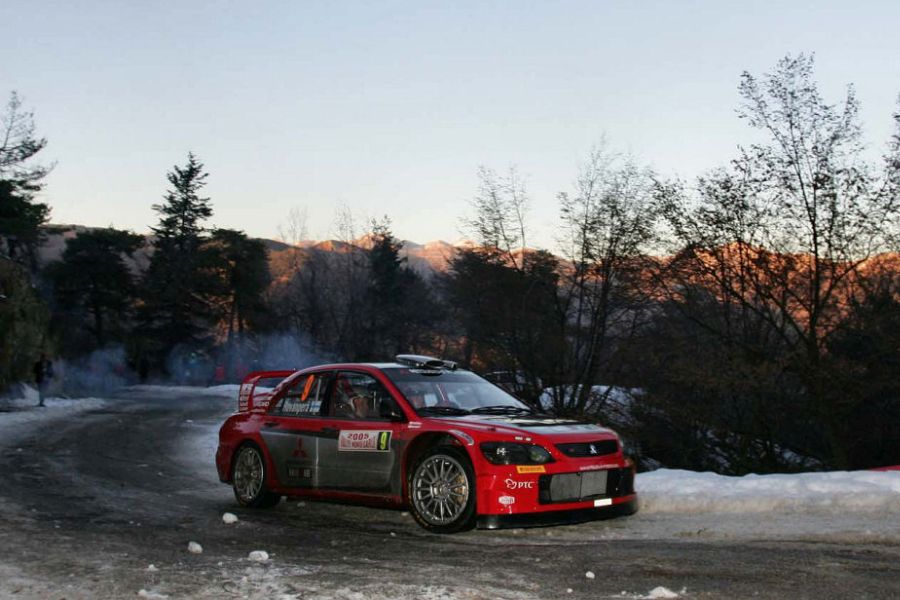 The Lancer WRC05 was the next evolution of a car. The car’s width was increased by 30 mm due to a change in the WRC regulations. The engine remained the same, but the ECU and the turbo wastegate were updated.

The bodywork was aerodynamically improved, while suspension links and driveshafts were lengthened. Steering-mounted gearshift paddles were also introduced, and longer ratios were adopted for first, third and fourth gears. 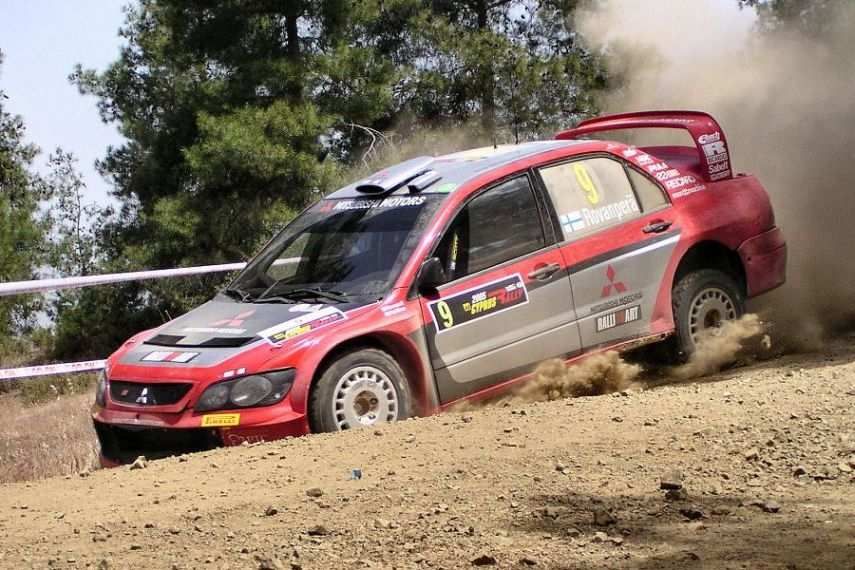 Harri Rovanpera scored one of two Mitsubishi’s podiums in 2005

Two podiums in the 2005 WRC season

For the 2005 WRC season, Mitsubishi signed Harri Rovanpera as the main driver in the #9 car, with Gilles Panizzi and Gigi Galli as other two drivers. At the season-opening Rallye Monte-Carlo, Panizzi scored a maiden podium for a car, finishing in the third place.

Harri Rovanpera was fast on gravel events, adding one more podium at the season-closing Rally Australia, where he finished in the second place. For Gigi Galli, the best result was fifth place in Germany and Australia. At the end of the season, Mitsubishi was fifth in the manufacturers’ standings. 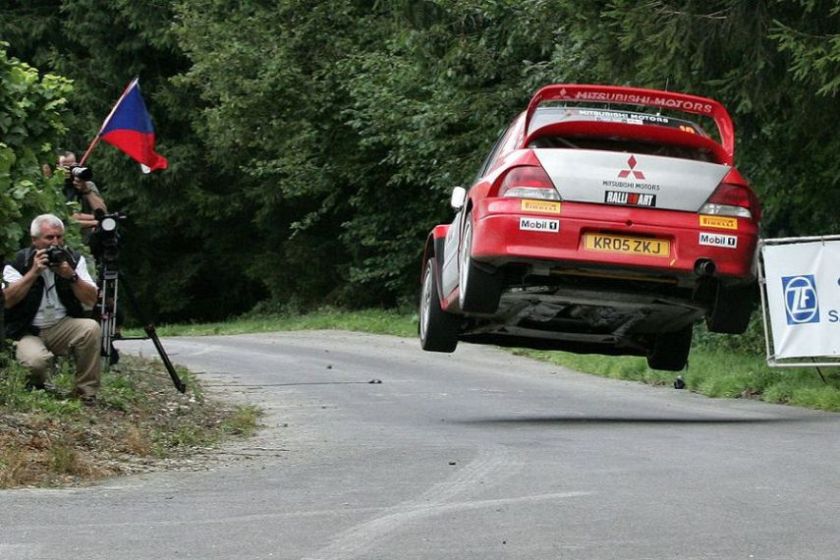 One more podium at 2006 Swedish Rally

Although results were better than ever before, Mitsubishi decided to pull out of the WRC at the end of 2005. This time, that was a definitive decision and Mitsubishi never returned to the World Rally Championship as a manufacturer’s entry.

During the 2006 season, Mitsubishi was supporting private or semi-works entries of Gigi Galli, Daniel Carlsson, Jussi Valimaki and Juho Hanninen. The highlight of the season was the Swedish Rally, where Galli finished fourth while Carlsson scored a podium with Mitsubishi Lancer WRC05, finishing in the third place. It was the third and the last podium for Mitsubishi’s World Rally Car. 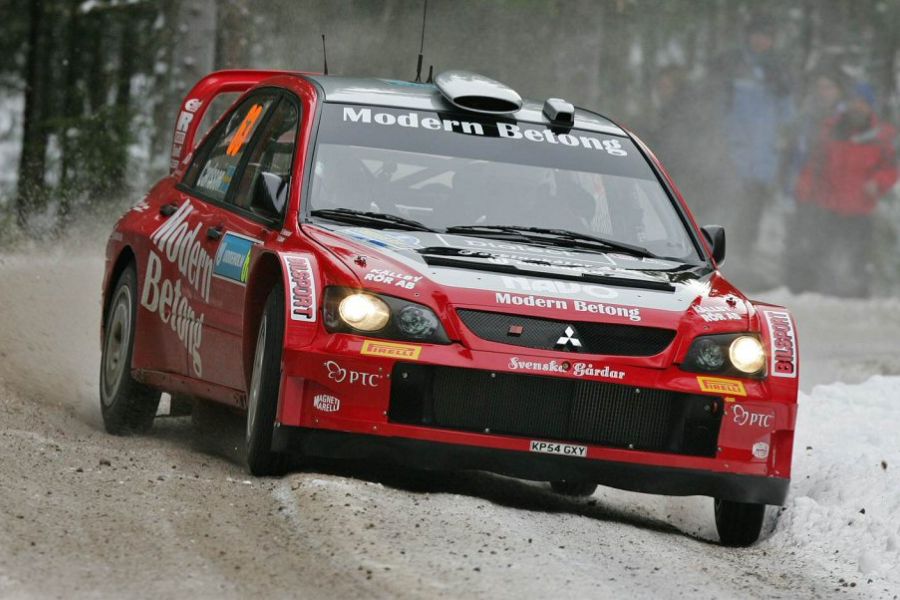 No less than seven drivers were using Lancer WRC05 in the 2007 World Rally Championship, with Toni Gardemeister, Juho Hanninen, Urmo Aava and Xavier Pons participating in more than one event. Gardemeister was the best one, scoring championship points in three occasions.

It was the last year for Lancer WRC in the World Rally Championship. Since then, a car remained in use in many national and regional championships.