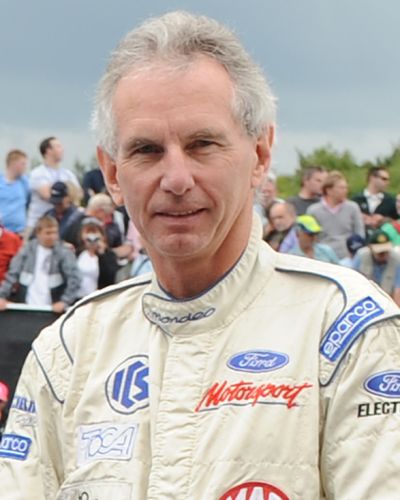 Rouse competed when BSCC rounds had approximately one race per weekend, so his 60 wins is worth more than Jason Plato's record-holding 96 wins. Rouse's winning percentage is 25,75%, compared to 17% of Plato.

Andrew Rouse was born on December 2, 1947, in Dymock, Gloucestershire. As a teenager, he started racing with self-built autocross cars and then entered Formula Ford in 1971. At the same time, he was working for Broadspeed, British automobile tuning and engineering company founded by Ralph Broad.

Rouse made his first steps in the touring car racing with Broadspeed's Ford Escort RS 1600 in 1972, competing in England and few races of the European Touring Car Championship. On home soil, he became the winner of the Ford Escort Mexico Series, while in the European competition his most notable result was class victory at 6 hours of Paul Ricard.

In 1973, Andy debuted at the British Saloon Car Championship, driving Broadspeed-prepared Ford Escort RS 1600 for the Team Esso Uniflo. In his debut season Rouse won the C class championship title and finished 4th overall in the BSCC classification. In the European competition, he tried Ford Capri RS 2600 at RAC Tourist Trophy at Silverstone, but retired.

In 1974 BSCC season, Rouse switched to Class B Triumph Dolomite Sprint and he won one more class title, finishing second overall. During that season he scored his first overall BSCC victory at Mallory Park and one more win later at Snetterton. Rouse also competed in ten races of the British Formula Atlantic Series, driving March 73B powered by Broadspeed's Ford engine.

First overall title for Rouse in 1975

In 1975, Rouse's Triumph was championship-winning car. He dominated in the championship, scoring six wins and five more podiums in 15 races. He was tied in the points with Win Percy, the best Class A driver, but the title went to Rouse.

In the 1976 BSCC season, Rouse was driving Triumph and finished 7th in the overall standings. During 1976, Broadspeed ran the works Jaguar XJ12C cars, for which Andy Rouse was both driver and race development engineer. The results were under expectations, so British Leyland stopped the racing program after 1977 season. His best result was second place in the ETCC race at Nurburgring, while sharing the car with Derek Bell, but other results were disappointing.

Rouse skipped the 1977 BSCC season and returned in 1978, driving BMW 520i and Ford Capri III 3.0s, but without notable results. In 1979, he participated in only one BSCC race, driving Ford Capri at Silverstone.  In 1980, the BSCC comeback followed, with Gordon Spice Racing's Ford Capri.  Rouse scored three wins and five more podiums and finished fourth overall in the championship standings.

In June 1980, Andy Rouse participated for the first time at 24 hours of Le Mans, sharing the Porsche 924 Carrera GT with Tony Dron. They finished 12th overall and fifth in GTP class.

In 1981, Rouse founded his own company Andy Rouse Engineering, taking many of ex-Broadspeed's workers with him. In the British Saloon Car Championship, he was driving Ford Capri III 3.02 for CSH Racing. With two wins, he finished 8th in the points.

During 1981, Rouse participated in few endurance races with Porsche 924 Carrera GTR, inluding 24 hours of Le Mans. This time he was sharing the car with Manfred Schurti. They finished 11th overall and first among IMSA GTO cars.

In 1982, one more season with Gordon Spice Racing followed, but Ford Capri was no longer victorious car. Rouse scored eight podiums, to finish ninth in the BSCC championship points. He continued to combine touring car and sports car racing, participating again in few races World Endurance Championship with Porsche 924 Carrera GTR.  In his third participation at Le Mans, Rouse's partner was Richard Lloyd, but they retired early in the race.

In 1983, Andy won his second BSCC title without scoring any victory with #34 Alfa Romeo GTV6. The initial champion was Steve Soper, who was driving TWR-prepared Rover Vitesse, but after he and the team were disqualified due to technical infractions, Rouse was declared the champion.

In 1984, Rouse was a dominant driver, taking seven wins and three more podiums in eleven races with #7 Rover Vitesse. In the 1985 season, Rouse was even better, scoring nine wins with #1 Ford Sierra XR4Ti and taking his fourth BSCC title. Ford Sierra XR4Ti was Rouse's car for one more season. In 1986, with five wins he finished third in the points, behind Chris Hodgetts and Richard Longman.

New car for the new championship

He was using the same cars in the World Touring Car Championship, driving under the banner of his own team and for Allan Moffat Racing. In ten races, his best result was second place at Fuji Speedway. He finished 25th in the points. Rouse also debuted at Bathurst 1000 with Ford Sierra RS500, but he didn't finish the race.

In the BTCC, Rouse competed mostly with Fords

Ford Sierra RS500 was Rouse's car for three more seasons, in which he finished third overall three years in a row, but took the Class A titles in 1988 and 1989. In those three seasons, Rouse scored 19 BTCC wins, but the rules prevented him from winning the overall titles.

The season 1990 was the last year of the multi-class format, in 1991 the Super Touring era started. Rouse was driving #3 Toyota Carina for Kaliber ICS Team. He won two races at Donington Park and one race at Brands Hatch, to finish third in the points for the fourth year in a row.

Last BTCC victory in 1992 at Silverstone

Rouse stayed one more season with Toyota, finishing fifth in the 1992 BTCC season. He won two times, at Oulton Park and Silverstone. His triumph in the last championship round at Silverstone was also his last BTCC victory.

In 1993, Rouse switched to Ford factory team, driving Ford Mondeo. His teammate Paul Radisich won three times and finished third in the points while Rouse grabbed only two podiums and finished 11th. In 1994 BTCC season, the number of double header events were increased from three to eight, so the whole championship had 21 races. Rouse participated in 19 races with #33 Ford Mondeo Ghia, scoring his only and last podium with third place at Brands Hatch. He finished 11th in the points.

After retiring from racing, Andy Rouse was building race cars and ran racing teams, including Nissan's semi-work team, but without notable results.