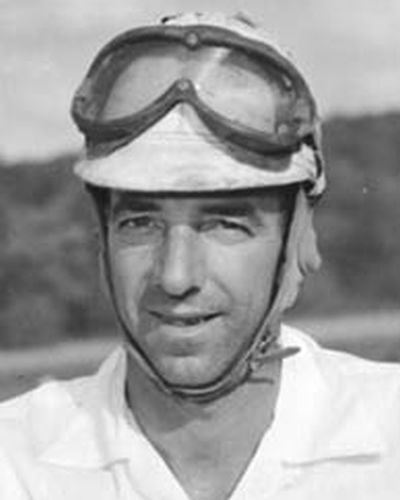 Herb Thomas was an American racing driver and one of the heroes of the early days of the American stock car racing. He is NASCAR's first two-time champion, taking the Grand National titles in 1951 and 1953. He was second in the points three times (1952, 1954 and 1956).

The highest win percentage of all drivers

Thomas recorded 229 starts in the NASCAR's premier series between 1949 and 1962, picking 39 pole positions and winning 48 races. His rate of victories rate is 21 percent, which is the highest win percentage of all-time among the drivers with 100 or more career starts.

Herbert Watson Thomas was born on April 6, 1923, in Olivia, North Carolina. He died at the age 77 on August 9, 2000. During a life, he was named of NASCAR's 50 Greatest drivers and inducted into the International Motorsports Hall of Fame. In 2013, he was an inductee into the NASCAR Hall of Fame.

Born in the small town of Olivia, Thomas originally worked as a farmer and owned a sawmill, supplying the military with lumber during the World War II. When the NASCAR Strictly Stock Series was formed in 1949, he was there.

The first season had eight races on seven dirt ovals plus Daytona Beach track, Herb Thomas participated in four races driving his own Ford. He had numbers #93 and #9 on his car in first two races, then switched to #92 in the third race. That number became his trade mark over a career.

In 1950, Thomas made thirteen appearances in the 19-race championship, now renamed the Grand National division. He started with Ford but later switched to Plymouth. His first victory came on October 15 at Martinsville Speedway. He scored three more Top 5 results in other races, finishing 11th in the points.

The 1951 NASCAR Grand National season saw the biggest expansion of stock car racing, as a racing calendar featured 41 races throughout a year. Thomas started a season with #92 Plymouth but scored the first win of the season in the #2 Oldsmobile of Hubert Westmoreland.

Soon after that, Thomas switched to a Hudson Hornet, at the suggestion of fellow driver Marshall Teague. On September 3, 1951, Thomas won the Southern 500 at Darlington Raceway, starting a legendary story about the "Fabulous Hudson Hornet". Until the end of the season, Thomas added five more wins on his account and became the first owner/driver to take the championship.

One more championship title in 1953

In 1952, the Fabulous Hudson Hornet was the race winner eight times but Thomas lost the title to Tim Flock, who also won eight races in his Hornet.

In 1953, Herb's vengeance was spectacular, as he won twelve races in 37 starts, dominantly taking a championship title ahead of Lee Petty. Thomas became the first two-time champion with 27 top 5 finishes during a season.

The #92 Motoramic Chevrolet is another famous car of Herb Thomas

The end of the Hudson Horner story came in 1955 when  Thomas started to drive the #92 Motoramic Chevrolets and Buicks. He crashed heavily with a Buick at Charlotte Speedway on May 1, missing the next three months of the season. He returned to score his third Southern 500 win in his Motoramic Chevy, one of three wins during the season. He finished 5th in the championship.

The season 1956 was the longest of all, with 56 races in a calendar. After starting a season with his own #92 Chevrolet, Thomas started to drive for other owners. The first was Smokey Yunick, the other was Carl Kiekhaefer. Thomas eventually returned to his car in the final part of the season.

He scored one victory with his Chevrolet, one win with Yunick's Chevrolet and three wins with Kiekhaefer's Chrysler. Herb's last ever NASCAR victory was at Merced Fairgrounds on June 3, 1956, in the #300B Chrysler. At the end of the season, Thomas finished second behind Lee Petty.

Herb Thomas was severely injured in a crash at Cleveland County Fairgrounds in Shelby, North Carolina, on October 23, 1956. That wreck effectively ended his NASCAR career, though he had two starts in 1957 and one in 1962.

In 1957, Thomas returned to race track two times with #92 Pontiac, at Raleigh Speedway and Lincoln Speedway in New Oxford. His last ever NASCAR race was the Gwyn Staley 400 at North Wilkesboro Speedway on April 15, 1962, where he was driving the #91 Chevrolet for Stoney Johnson.