From moonshiners to millionaires - a look inside NASCAR history

Though NASCAR of today is the American national motorsport, its earliest days were not as magnificent and romantic as those in Europe where car races attracted the blue-blooded and the otherwise rich. In the beginning, NASCAR was closely entangled with one clear, highly flammable and potentially poisonous liquid. And no, it’s not gasoline, but moonshine, whiskey’s unaged, unlicensed and frowned-upon cousin.

To understand NASCAR’s beginnings, we must travel back to 1920, when Eighteenth Amendment went into effect, prohibiting the use, production, importation and transportation of alcohol beverages. In the South, though, prohibition didn’t end in 1933production and distribution of liquor were legal, the taxes were extremely high, so spirits were not affordable to the majority of Southerners. 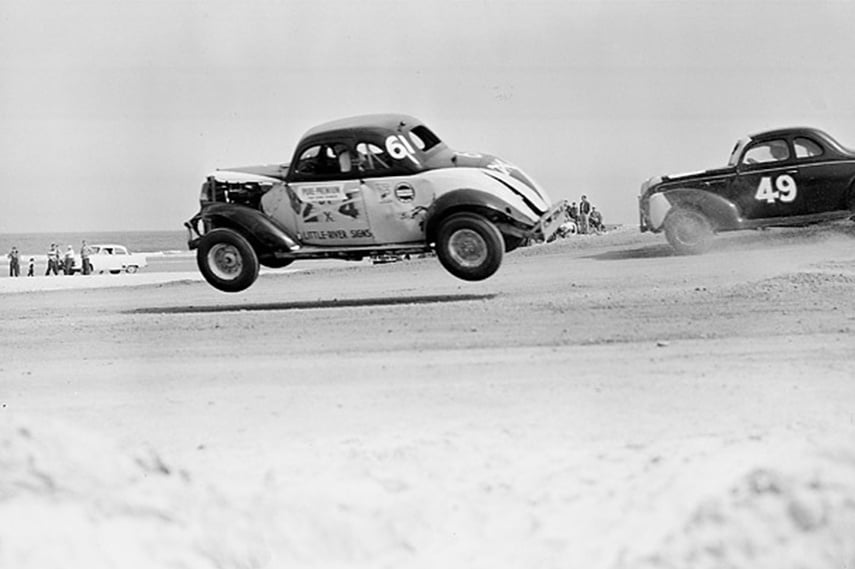 NASCAR racing was far different from what we see today

From moonshining to racing on weekends

With that in mind, local distilleries turned to the production of moonshine and young guys who were in charge of its transportation were the pioneering drivers of NASCAR. Their task was to outrun and outsmart the police while thundering through the backwoods, delivering liquor to the bars all the way from Louisiana to Virginia.

All that one driver needed to become a transporter was calmness, bravery, good knowledge of the terrain and a cheap car with a potent motor that was hard enough to handle the unpaved, bumpy and muddy Southern roads.

The choice was obvious: the 1940 Ford Deluxe Coupéa cheap, small and durable two door automobile with the famous Flathead V8 engine producing up to 100 horsepower, a short wheelbase that could ensure sharp turning and a decent trunk for all that moonshine.

As soon as the police started upping their game, the dangers of moonshining suddenly became even greater and drivers were often arrested, serving prison sentences instead of racing during the weekends. To continue operating, both distillers and drivers had to resort to various modifications to ensure that their cars were still getting to the bars faster than the police. 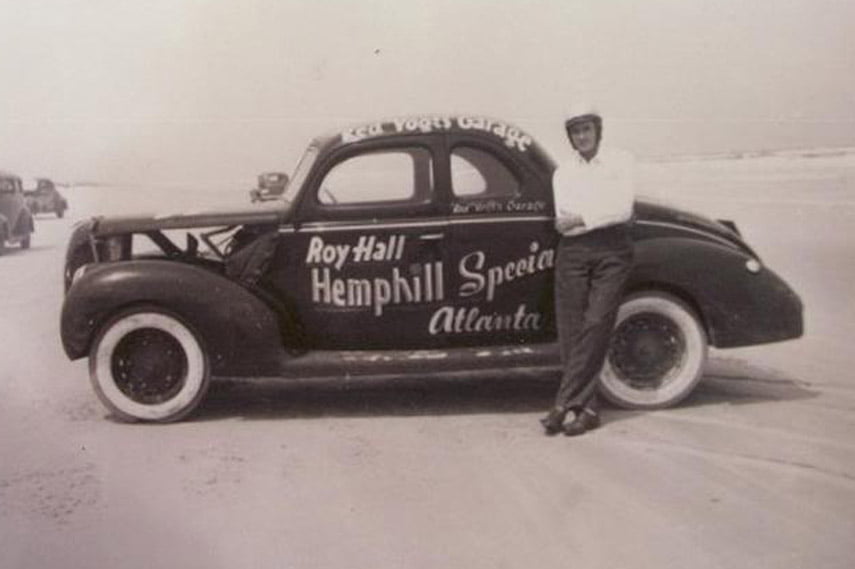 Staying ahead of the law with upgrades

The earliest upgrades were of course all about horsepower and they later went as far as installing huge Cadillac engines. Very soon, they became even more ingenious, like brakes which could enable cars to corner even more swiftly by stopping just one side of the car, or switches that could turn off rear lights in the dark. That way, the moonshiner counterculture gave birth to the American hot rod. 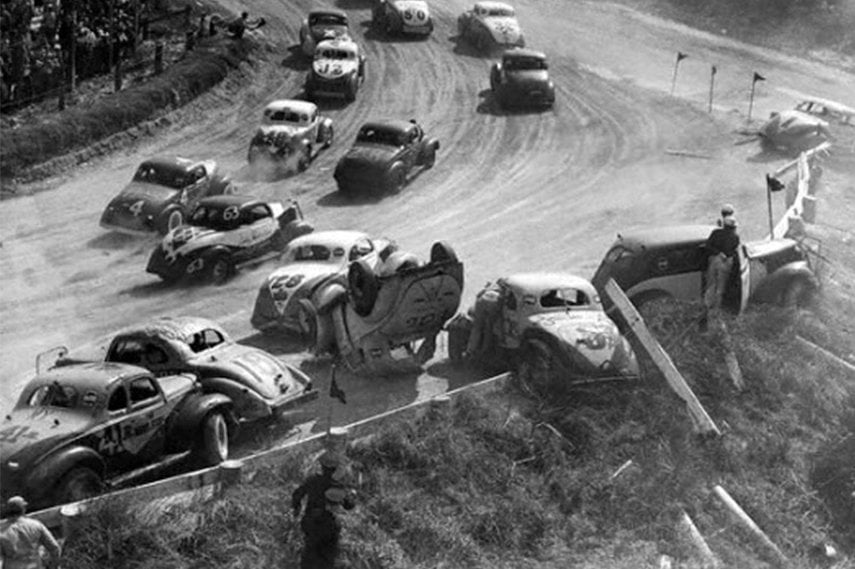 Crash at a Daytona Beach race, one of the early NASCAR races

The greatest proof of driver’s quality was his freedom, but drivers soon found the need to distinguish themselves from their other moonshining colleagues. So, dirt oval races were the best weekend past-time and a chance to earn some extra money. The races quickly started gaining popularity both with the moonshiners and the crowds, and many races were organized throughout the South, often without any clear rules and highly variable prize money given away by shady promoters.

One of the guys that drove around the ovals was William Bill France, a D.C. racer and mechanic who moved to Florida. He felt the need to organize the sport and after a driver meeting in December of 1947 at the Streamline Hotel in Daytona Beach, the National Association for Stock Car Auto Racing, better known as NASCAR, was born. That way, the sandy beach in Florida became the home of NASCAR. 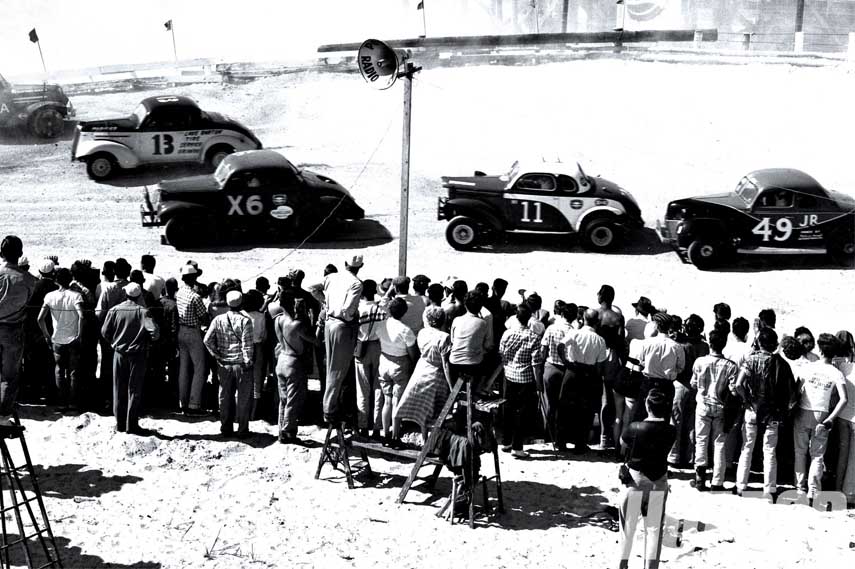 NASCAR history is written by moonshiners

The first NASCAR sanctioned race took place on Daytona Beach on February 15, 1948, while the first Strictly Stock race was held on June 19, 1949, in North Carolina, at the Charlotte Speedway. The first main series champion was Red Byron.

With NASCAR as the organizing body came the first sponsors, and the prizes were getting bigger, but the best drivers still held onto their perilous jobs in Southern backwoods. The pay of a moonshiner was still higher than the prize of a NASCAR race winner, so many ambitious racers still risked their freedom, often missing races because they served jail sentences.

The practice stretched all the way to the fifties, despite the fact that NASCAR was already an established organization. NASCAR legend and six-time Winston Cup owners’ championship winner Junior Johnson was a second generation moonshiner himself, and he is the most successful bootlegger-turned-racer. As he once stated, all the best racers on the dirt ovals were, in fact, moonshiners. 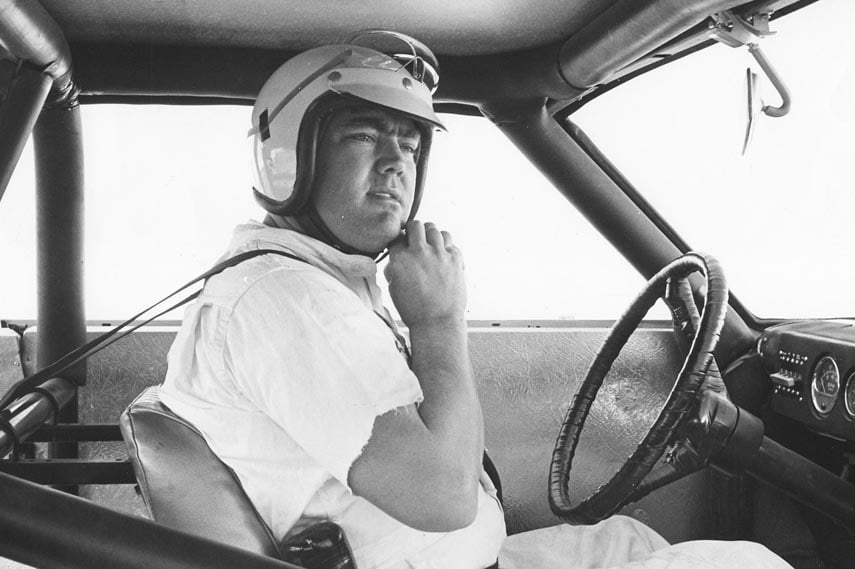 At first, the cars were strictly stock, but NASCAR Series allowed modifications through history

Very quickly, little Flathead Fords weren’t fast or agile enough to outrun the more-and-more powerful police cars, so, many moonshiners started switching to bigger cars with stronger V8 engines. That trend was mirrored on the tracks as well, where both the drivers and the racing fans benefited from the booming automotive industry. Full-size two door sedans were soon dominating the tracks, and one of the most iconic cars of that era was Hudson Hornet.

Driven by Marshall Teague, Herb Thomas and several other drivers including the Fonty Brothers, The Fabulous Hudson Hornet dominated the NASCAR ovals with 13 wins in 1951, 49 in 1952, and 46 in 1953.

The only early NASCAR requirement for entering the cars was that it had to be sold to the general public, and that’s how many strange cars ended up racing the ovals. With Detroit producing more and more powerful engines, the speed threshold was getting higher, so the cars started getting their first rulebook aftermarket modifications, mainly to improve durability and safety. 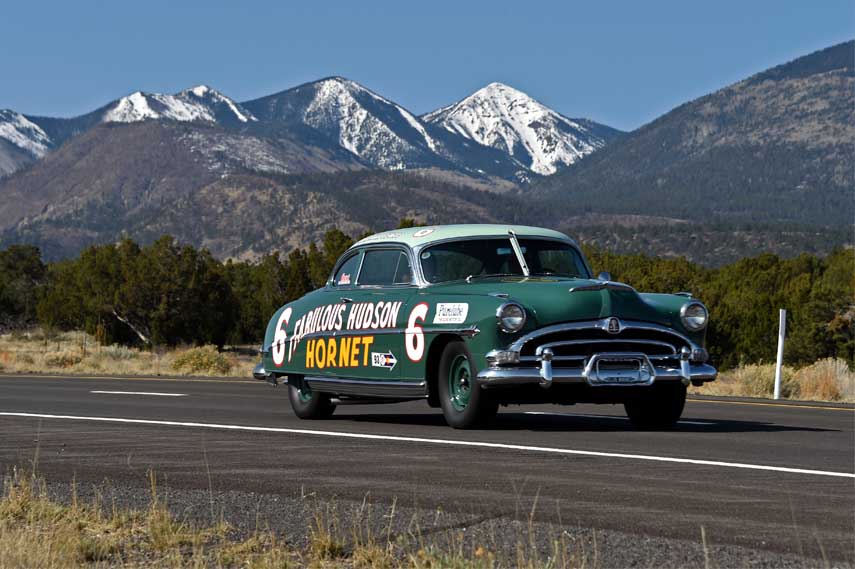 With the stakes being risen higher and higher, the oval race cars soon became mere platforms and bodyshells upon which various improvements were made. That moment occurred in 1966 when Holman Moody grafted a Ford Galaxie onto a Ford Fairlane. The following step was welding a tubular frame onto the Fairlane unibody, and the move was emulated by Petty’s team as well. That started the trend which evolved into a highly regulated platform system we know today.

The next big NASCAR moment came with the closer involvement of Detroit’s automotive companies which started purpose-building homologation vehicles for Grand National series. The most extreme evolution in the early NASCAR years was reflected in the so-called Aero Warriors, four heavily modified muscle cars with extreme aerodynamics built for the 1960 and 1970 seasons. Mopar built two of them, Dodge Charger Daytona and Plymouth Superbird while the other two came from Ford Motor Company: Ford Torino Talladega and Mercury Cyclone Spoiler II. 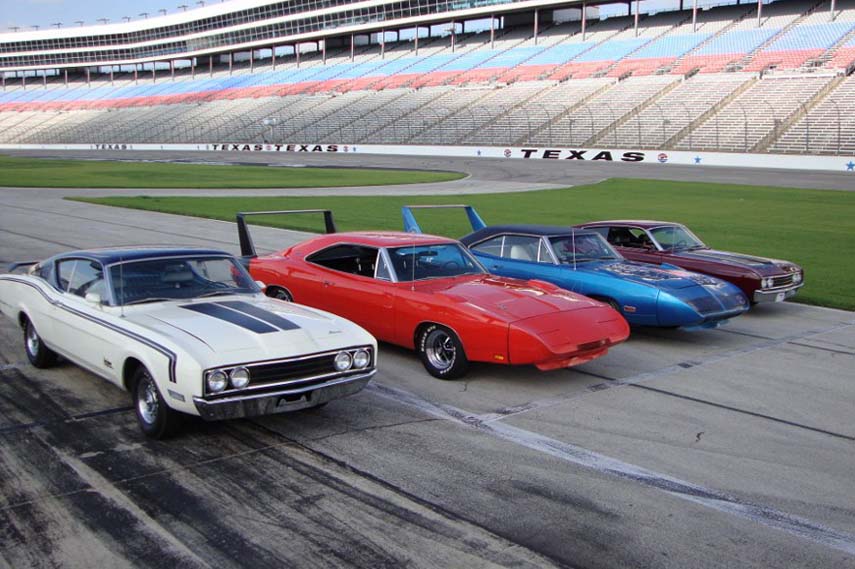 By the late eighties, the cars stopped being specifically made for NASCAR by Detroit’s Big Three, and cars gradually became simple, highly modified bodyshells with visual cues taken from the current production models. The cars’ mechanics of the newest generations stock cars have been purpose-built and developed for NASCAR with no homologation needed to enter the competition.

One of the biggest upsets in NASCAR came in the 2000s when Toyota joined the series. So far, Toyota hasn’t won any manufacturers’ championships, but the 2015 Sprint Cup champion Kyle Busch drove a NASCAR Toyota Camry to the championship victory. 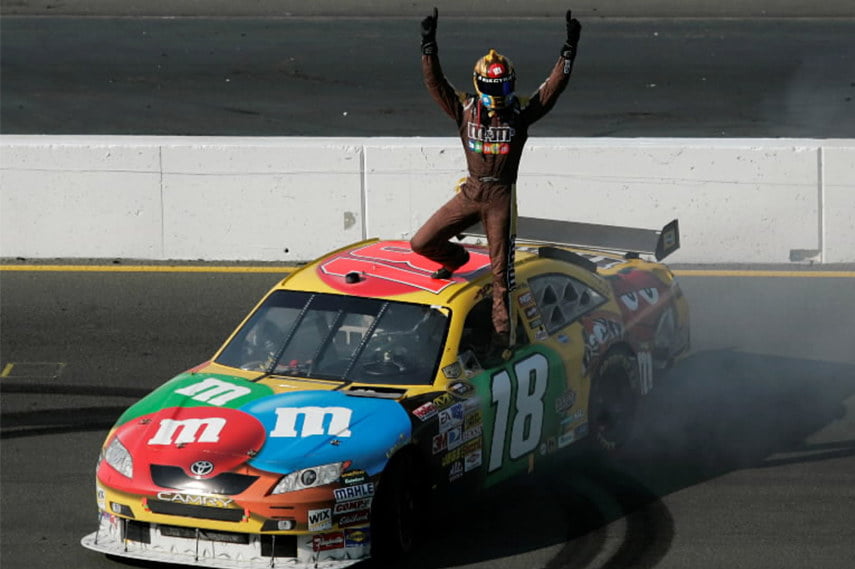 Kyle Busch drove a Toyota Camry to victory in 2015

The tracks have evolved from dirt ovals to monumental stadiums

The first NASCAR-based track was the Darlington Raceway, an egg-shaped track built by Harold Brasington and the first asphalt track to host the NASCAR event in 1950.

After Darlington, many more speedways followed, but the birthplace of NASCAR had to wait for its asphalt track until 1959 when Daytona International Speedway was opened. The track was built by Charles Moneypenny and NASCAR founder Bill France, and the inaugural race at the new track was held on February 22, 1959. The winner of the race was Lee Petty, father of Richard Petty, who later became known as The King of NASCAR and seven-time Daytona 500 winner. Ever since that February in 1959, it has been the season-opening NASCAR event.

Year by year, stock racing became more and more popular. As the prohibition was finally over in the South, moonshiners could become professional racers with decent pays provided by growing sponsor pools and crowd-packed speedway grandstands. 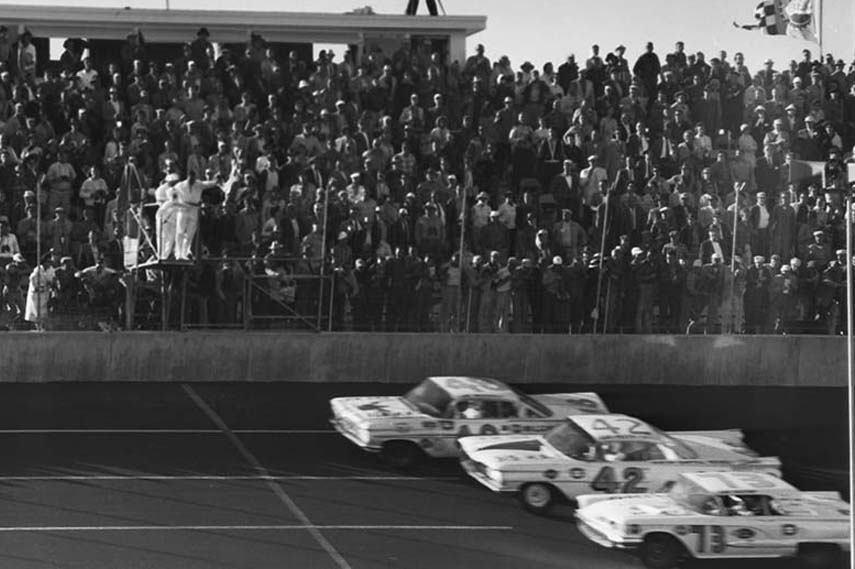 Sponsors came and went, but the France family was always in charge of NASCAR

The main NASCAR series had several name changes from 1949 to today. At first, it was named Strictly Stock Series but changed its name to Grand National Series in 1950.

The name stuck until the first big sponsor came in 1971. It was R. J. Reynolds Tobacco Company who got the naming rights and the series became known as Winston Cup from 1971 to 2003. The longtime sponsorship ended with the wireless provider Nextel buying the naming rights for the 2004 season, renaming the NASCAR series to Nextel Cup. Nextel was acquired by Sprint Corporation in 2005, but the series was renamed Sprint Cup in 2008. 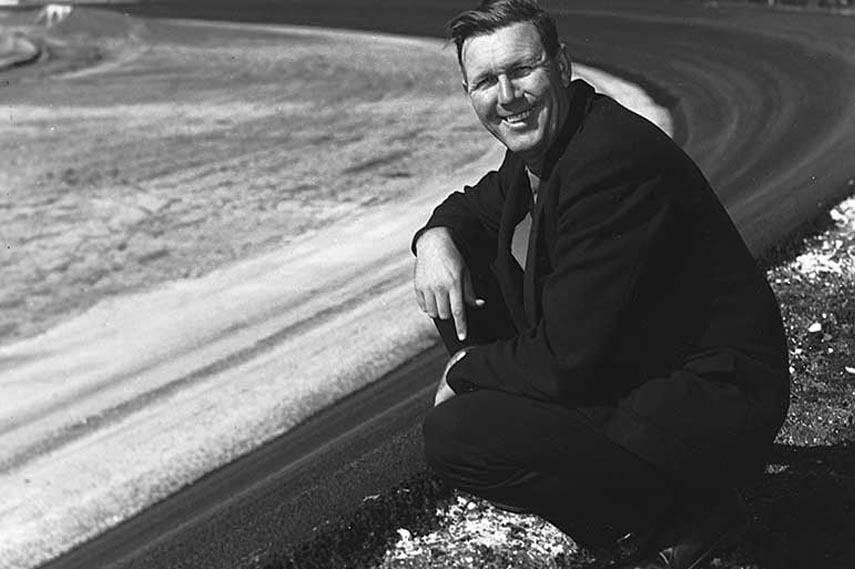 In 1969, Bill France Sr. opened the Lincoln, Alabama-based Alabama International Motor Speedway, or as it’s best known, the Talladega Superspeedway. The track was longer and faster than the Daytona International Speedway and since its opening, Talladega has been among the most popular NASCAR venues.

One of the biggest NASCAR milestones was in 1972, the second year of Winston Cup era, when dirt tracks fell out from the schedule (although the last main series dirt event was held two years earlier, on September 30, 1970, and was won by Richard Petty), which marked the beginning of modern NASCAR.

In 1974, Bill France Senior passed the baton to his oldest son Bill France Junior. The new CEO commissioned Bob Latford to design a new point system, with equal points awarded for all races no matter their prize money or duration. The newly developed point system ensured that drivers had to run all the races to become champions, and it was used without change from 1975 until the Chase was instituted for the 2004 Nextel Cup season.

The France family is still in charge of NASCAR, with Bill’s son Brian France as its CEO since 2003, after a short presidency of Mike Helton, who was put in charge by Bill France Jr. after he was diagnosed with cancer in 2000 and resigned the position.

The day that put NASCAR in the spotlight

However, the big breakthrough had to wait until the 1979 Daytona 500, the first flag-to-flag covered NASCAR race. A brawl between Cale Yarborough, Bobby and Donnie Allison that followed the end of the race crash really put NASCAR in the spotlight. That event was the defining moment in NASCAR history, drawing national attention to what would become the most popular American motorsport series.

The race winner was the six-time champion Richard Petty who claimed his seventh NASCAR main series title by the end of 1979, a record unmatched until 1994 by the late Dale Earnhardt. NASCAR’s popularity has significantly risen in the early and mid-nineties, which coincided with the demise of IndyCar.

The most popular drivers of the era, if not ever, were Dale Earnhardt and Jeff Gordon, two of the most accomplished racers besides Richard Petty. In the mid-2000s, NASCAR’s popularity started stagnating and slowly declining, but the new generations of drivers keep it alive, interesting and very well watched. 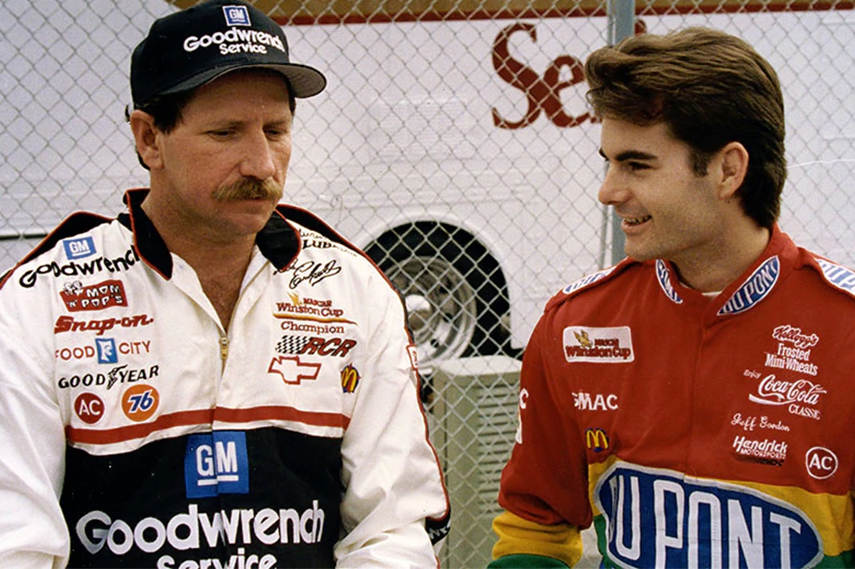 Continuing the legend of the American motorsport

NASCAR’s rise to national and international fame is the definitive automotive rags-to-riches story. It proves that all you really need to succeed are the people ready to drive the hell out of dirt ovals and the rumble of V8 engines to capture the ears and hearts of the rapidly expanding crowds. Simple, yet exciting as it is, NASCAR stock racing was, is, and forever will be the bona fide American motorsport and one of defining American sports in general. 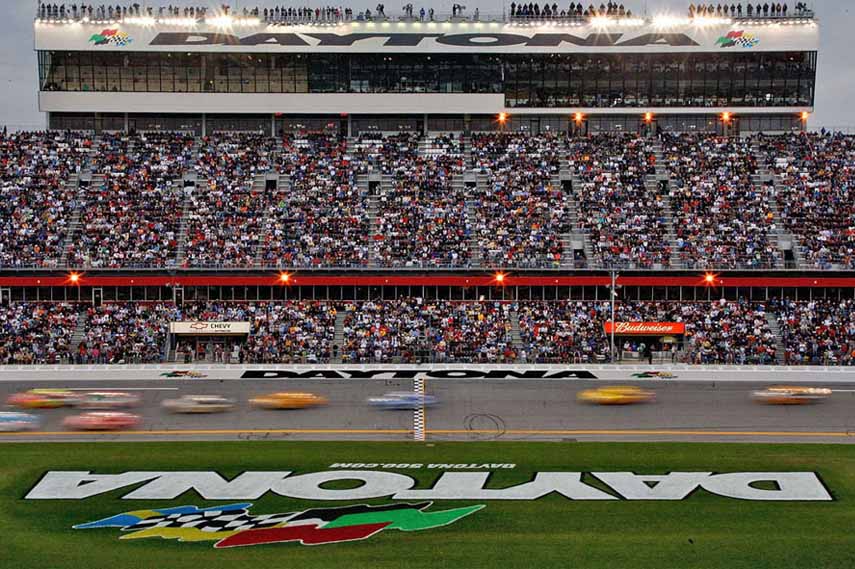