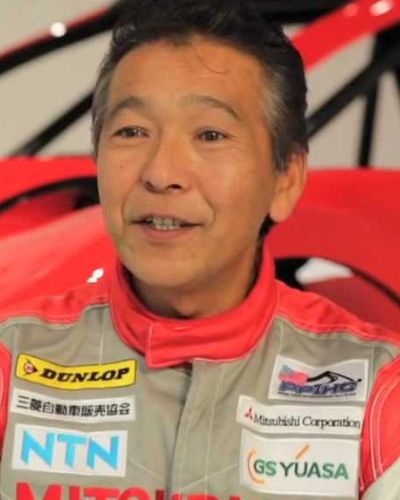 The former racing driver Hiroshi Masuoka is one of only two Japanese racers who won the Dakar Rally. Masuoka did that two times in a row, driving the factory-entered Mitsubishi Pajero in 2002 and 2003. He also finished on a podium two times, in 2001 and 2004. In total, Masuoka participated twenty-one times at Dakar Rally, always driving for Mitsubishi.

Masuoka retired from rally-raid racing in 2009, following Mitsubishi's withdrawal from competition. Since then, he had several different duties inside the company. In recent years, he participated few times at the Pikes Peak International Hill Climb with electric Mitsubishi prototypes. He is also involved in various driver trainings organized by Mitsubishi.

Hiroshi Masuoka was born on March 13, 1960. He started off-road racing in 1979. He debuted at Paris – Dakar Rally in 1987, surprisingly winning two stages during the 20-stage event, driving the Mitsubishi Pajero. At the end of the race, he finished in the 29th place.

In the following years, except in 1989, Masuoka continued to return to the Dakar Rally with Mitsubishi. He finished 10th overall in 1990 but the first big success came in 1994 when he was fifth in the overall classification. For the next ten years, until 2004, Masuoka became the regular Top 10 finisher.

He was closest to victory in 2001, at the historical event which was marked by the victory of Masuoka's teammate Jutta Kleinschmidt, the first and only win of the female driver at Dakar Rally. Masuka and Kleinschmidt were fighting for the victory until the very last stage. After 6,180 kilometers of special stages, the margin was just two minutes and 39 seconds. After leading for nine of twenty stages, Masuoka lost the lead on the final day.

Maiden Dakar victory for Masuoka in 2002

Hiroshi Masuoka and his navigator Pascal Maimon finally clinched a victory at 2002 edition of Dakar Rally, which started in Arras in northern France. Masuoka took the lead at the sixth stage and remained in front until the end. In total, he won five stages and crossed the finish line with 22-minute advantage over Jutta Kleinschmidt. Kenjiro Shinozuka finished third, to score all-Mitsubishi podium. In a fact, the first eight places were taken by Mitsubishi drivers.

2003 - Peterhansel  handed a victory to Masuoka

In 2003, the races started from Marseille. Masuoka was the main driver for Mitsubishi, with Stephane Peterhansel for the first time in a team. Peterhansel was the leading driver for the most of the race, but he lost almost two hours on the penultimate stage, handing the victory to Masuoka. His navigator was German Andreas Schulz.

Retirement after 21 participations at Dakar Rally

Peterhansel clinched his maiden win in a car category a year later (2004), with Masuoka finishing second. The Japanese driver participated in three more events on the African soil, finishing best in the 5th place in 2007. After the Dakar Rally was moved to South America in 2009, Masuoka participated for the last time, failing to reach the finish line.

After retiring from rally-raid racing, Masuoka remained the Mitsubishi employee. He was working for the Public Relations department for a while, but his main duties were always among cars. He was involved in a development of electric cars and then returned to race track in 2012, participating in the Pikes Peak International Hill Climb with electric Mitsubishi MiEV Evolution. He returned to Pikes Peak two more time, with two evolutions of the electric prototype.

In 2014, Mitsubishi shattered all records for electric vehicles at the event. Greg Tracy was the winner of electric modified class, setting a time of 9:08.188, just four seconds ahead of Mitsubishi's teammate Masuoka in the second place. In the overall classification, they finished second and third, behind Romain Dumas.

Masuoka proved that, at the age 54, he was still fast and competitive against much younger drivers. Although he isn't a regular race car driver, Mitsubishi uses his experience in the various driving trainings and presentations, both on the circuits and off-road tracks.