The Pikes Peak International Hill Climb (PPIHC) is one of the oldest and most popular races in the history of motorsport. The first race to the summit of the Pikes Peak Mountain in Colorado, USA, was held in 1916. Since then, the race was a part of various racing competitions, but mostly it was the self-sanctioned non-championship event that attracted some of the most popular racers from all over the world. 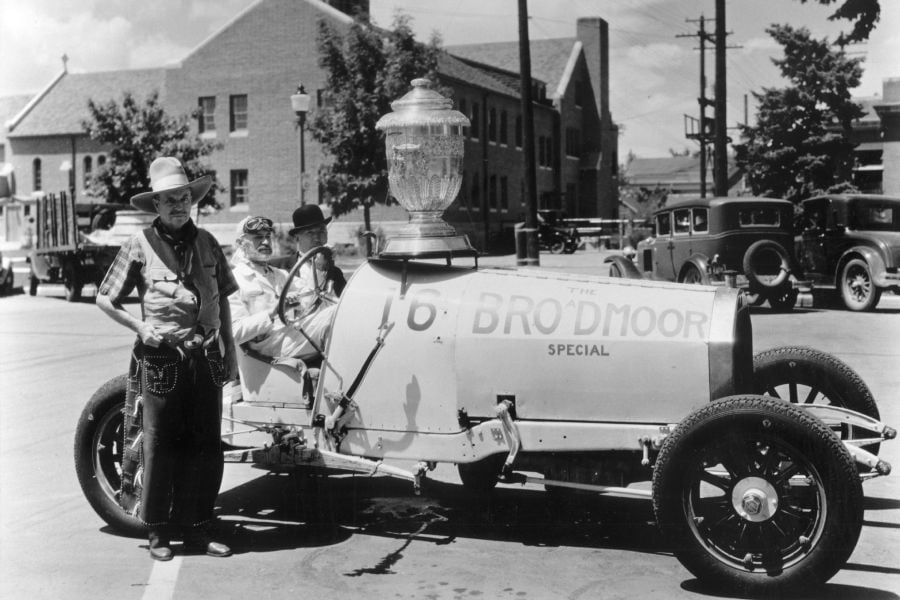 Spencer Penrose and the Penrose Trophy

All kinds of vehicles are welcome at Pikes Peak

The race was founded in 1916 by Spencer Penrose, who was also the founder of The Broadmoor Hotel, Pikes Peak Highway and El Pomar Foundation. The traditional date for the race is the last Sunday of June. The race is one of the most diverse motorsports events among similar races because all kinds of vehicles are able to compete: from sidecars, motorcycles and semi-trucks to the usual race cars with no limits in the power output. On June 26, 2016, The Broadmoor Pikes Peak International Hill Climb celebrated the 100th Anniversary of the race, although it wasn’t the 100th edition because the race was not held from 1917 to 1919 and from 1942 to 1945 due to World Wars I &ampII.

Spencer Penrose built the highway for tourists and racers

The story about the Pikes Peak race started in 1915, when the Colorado Springs’ businessman, entrepreneur and philanthropist Spencer Penrose converted the narrow carriage road into the wide Pikes Peak Highway, investing $500,000 from his pocket. The Pikes Peak’s summit was a popular touristic spot and Penrose wanted a proper road. In 1916, the first race was organized. In fact, it was a racing event with three races. The first overall winner was Rea Lentz, who needed 20 minutes 55.6 seconds to get to the top with his Romano Special.

The race resumed after World War I and from 1920 to 1924, there have been three races as a part of each event. In 1925, Charles H. Myers was the first who broke the 18-minute mark, climbing to the top in 17 minutes 48.4 seconds in his Chandler Special. 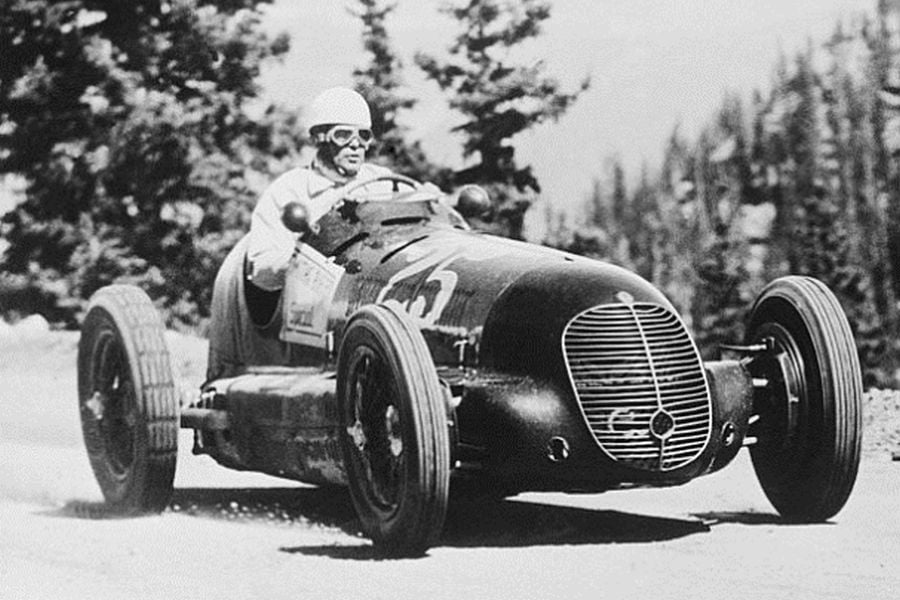 In 1934, the first member of Unser family took the overall victory at Pikes Peak. It was Louis Unser, who was driving the Stutz Special. In the next couple of years, Louis Unser scored eight more overall wins, including three wins at the AAA Championship. In his last victory, in 1953, he set the record time of 15 minutes 15.4 seconds.

From 1946 to 1970, the Pikes Peak Hill Climb was a part of the main American open-wheel racing series, sanctioned by the AAA (American Automobile Association) until 1955 and by the USAC (United States Auto Club) until 1970.

During the AAA/USAC period, the next Unser who ruled at Pikes Peak was Bobby Unser. He won nine times between 1956 and 1968, becoming the first driver who broke the 12-minute mark. In 1968, he set the record time 11 minutes 54.9 seconds, driving the Rislone Special. His brother Al Unser was the winner two times, in 1964 and 1965.

In 1969, the winner was Mario Andretti and it was the only Pikes Peak victory of the four-time IndyCar champion. The last winner of the USAC-sanctioned race was Ted Foltz in 1970. In the next couple of years, the race was again a non-championship race but some of the famous open-wheel drivers regularly visited the Colorado’s race. Rick Mears had won at Pikes Peak in 1976 before he became the four-time Indy 500 winner. In 1983, Al Unser Jr. won the race, driving the Wells Coyote Chevy and setting the record time 11m 38.3sec. 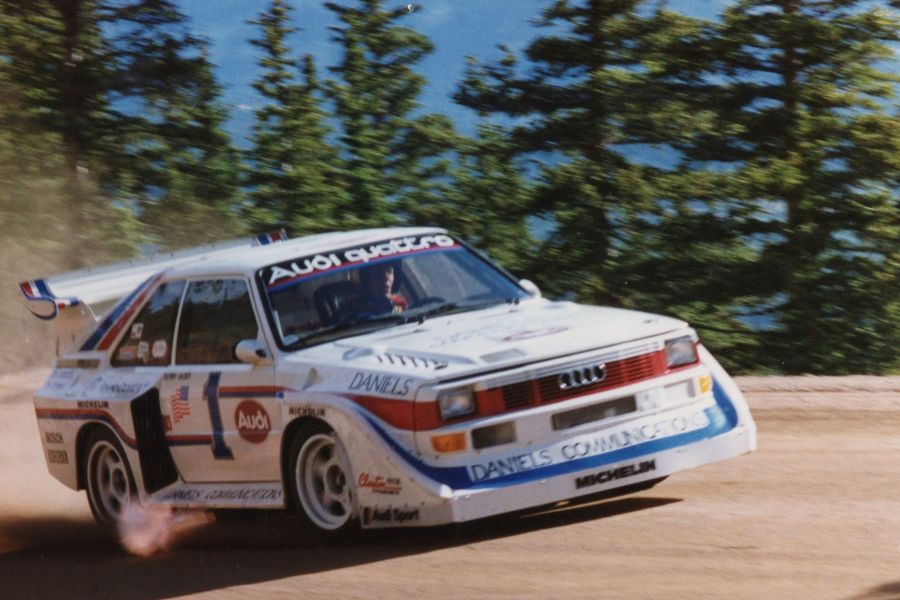 In 1986, Bobby Unser added one more win, his tenth, driving Audi Sport Quattro. He wasn’t the last Unser who won at Pikes Peak because Robby Unser took four overall wins between 1989 and 2004. In total, Unsers collected 26 overall wins and because of that, many suggested renaming the peak into Unser’s Peak.

One of the milestone years for the race was 1984 when the first notable European racers visited Pikes Peak, including the Norwegian racing driver Martin Schanche with Ford Escort Mk3 4×4, and the French rally driver Michele Mouton with Audi Sport Quattro. The overall winner was Bill Brister in the open-wheel Wells Coyote while Michele Mouton won the Open Rally category.

It was the record for only one year until Ari Vatanen came in Peugeot 405 Turbo 16. He needed 10min 47.220sec for his climb to the top, which was pictured in the award-winning film Climb Dance. In 1989, Robby Unser scored one more victory for Peugeot and his first out of four wins.

An age of Rod Millen and Monster Tajima

In 1993, Paul Dallenbach broke the record with Davis Chevrolet open-wheeler, setting the time of 10.43.630. A year later, the era of Rod Millen and Nobuhiro ‘Monster’ Tajima began. In the 1993 race, the New Zealanders set the sensational new record with Toyota Celica Super Sport Turbo. He climbed to the top in 10 minutes 4.060 seconds. In 1994, Tajima took his first victory and then Millen won four more times in a row.

In the next couple of years, nobody was able to break Millen’s record time until Nobuhiro Tajima constructed the monstrous Suzuki XL8 for the 2007 race. He set the new record time 10.01.408. Between 2006 and 2011, Tajima took six consecutive wins and became the new King of the Mountain. In 2011, he finally broke the 10-minute mark and set the record time 9.51.278. 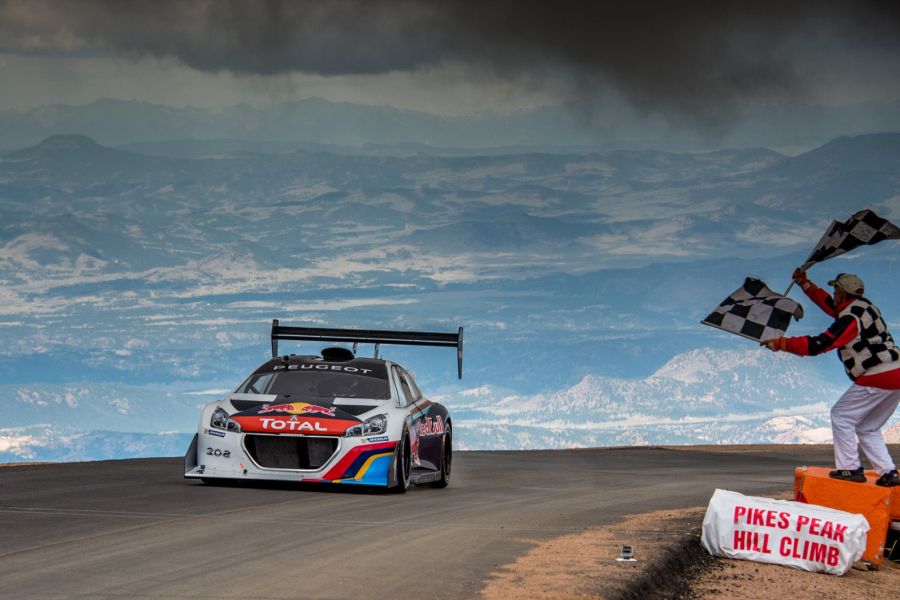 Sebastien Loeb smashed the record in 2013

It was the last race on the track that was partially paved and partially dirt. The City of Colorado Springs began to pave the highway in 2002 and they paved approximately 10 percent of the route each year. The job was done in October 2011, and for the 2012 event, the complete track was paved.

The 2012 event saw the biggest ever starting field, including numerous electric vehicles. The new record (9.46.16) was set by Rhys Millen (Rod Millen’s son) in the Hyundai Genesis Coupe.

In 2013, the nine-time world rally champion Sebastien Loeb came to the Pikes Peak for the first time, in the specially prepared 875hp/875kg Peugeot 208 T16. He set the record time of 8 minutes 13.878 seconds, becoming the first driver who drove under nine minutes.

In 2014, another Frenchman Romain Dumas scored his first out of two wins with Norma M20 RD Limited prototype. The second win followed in 2016, when he also broke the 9-minute mark, setting the time 8.51.445. 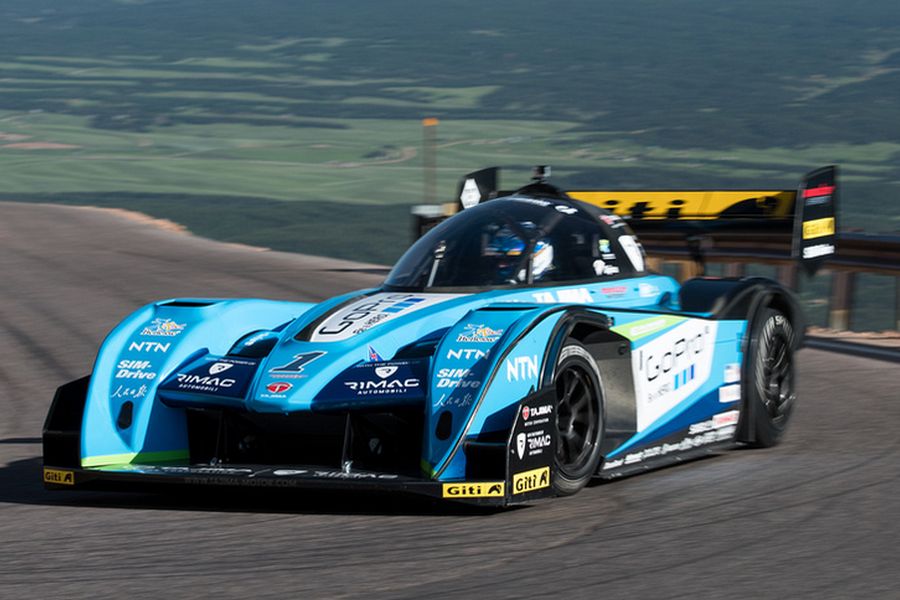 2015 – first ever overall win for the electric car

The 2015 race saw the first ever overall victory for an electric car, with Rhys Millen in the Latvian-built Drive eO PP03. His main opponent Nobuhiro Tajima was driving the Croatian-made Rimac E-Runner Concept_One.

In 2016, Rhys Millen finished second overall and was the fastest in the Electric Modified division, becoming the third driver with ‘under 9 minutes’ time. He reached the finish in the eO P100 electric prototype in 8 minutes 57.118 seconds.

The future of hill climb racing is electric

After a hundred years of racing at the Colorado’s mountain, the Pikes Peak International Hill Climb shows that the motorsport is following the current technology trends, incorporating more and more electric vehicles to the starting grid.

Compared to other racing disciplines, the Pikes Peak race is specific because of big altitude that causes the loss of power (up to 30 percent) for the internal combustion engines, while the electric cars have no loses at all. So, the future of racing at Pikes Peak is certainly looking electric. 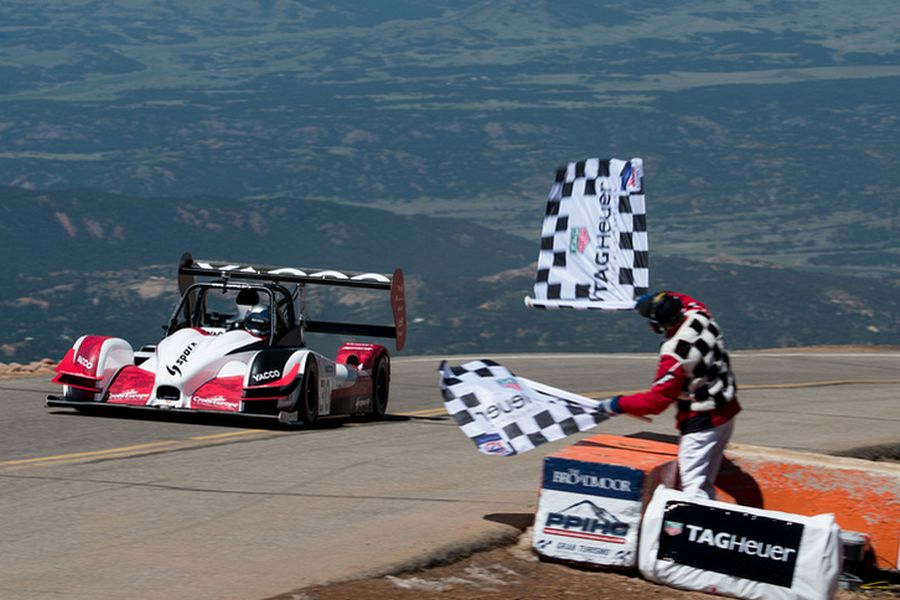 For people who simply want to remember the past of this glorious race, the Pikes Peak Hill Climb Museum Hall of Fame was founded with a mission to honor and preserve the achievements of individuals and organizations that have left an indelible mark on the Race to the Clouds. The Hall of Fame is located in the Pikes Peak Hill Climb Experience of The Penrose Heritage Museum, across the street from The Broadmoor Hotel in Colorado Springs.