The Japanese Grand Prix is a race that is an integral part of the Formula 1 World Championship since 1987, taking place at Suzuka Circuit except for two events at Fuji Speedway (in 2007 and 2008).

The Japanese Grand Prix was held for the first time back in 1963 at Suzuka Circuit as a sports car race. After ten editions as a non-F1 race, the event became a part of F1 Championship in 1976 and 1977 and then dropped out from F1 calendar between 1978 and 1986. For many years, Japanese Grand Prix was the fixture late in the F1 season, becoming the place of some epic title-deciding battles and some of the most memorable races in F1’s history.

The record holder with six wins in Japan is Michael Schumacher. Among active drivers, Lewis Hamilton and Sebastian Vettel have four wins each. Among constructors, McLaren won nine times in Japan, two more times than Ferrari. 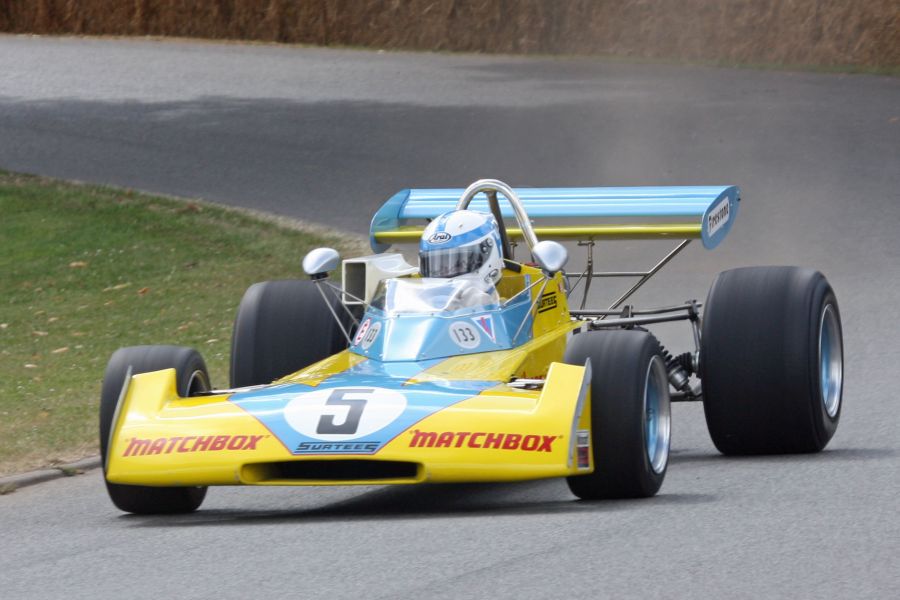 British winner of the first ever Japanese Grand Prix in 1963

The first ever Japanese Grand Prix was organized in May 1963 as a non-championship sports car race at Suzuka Circuit. The Briton Peter Warr took the victory in a Lotus 23-Ford, ahead of Michael Knight and Arthur Owen in same cars. In 1964, the race event returned to Suzuka and then, in 1966, it was moved to Fuji.

At Fuji, the Japanese Grand Prix was organized eight more times under different rules, mostly as a sports car race but also as a Formula Libre race. The most famous winner was John Surtees, who won in 1972 in Surtees TS10-Hart. The last pre-F1 race was held in 1975 when Masahiro Hasemi took the victory in a March-Nissan. 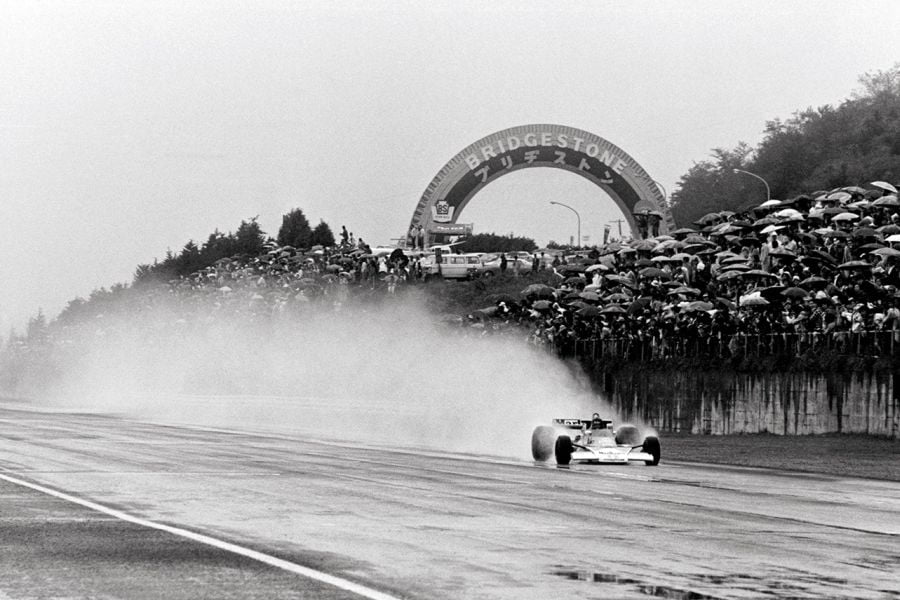 The finale of the epic 1976 Formula 1 season

In 1976, the Japanese Grand Prix at Fuji Speedway became the part of the Formula 1 World Championship as the 16th and the last race on a calendar. It turned to be one of the most epic seasons in the history of Formula 1, including a duel between James Hunt and Niki Lauda, and Lauda’s near-fatal crash at Nurburgring.

Recovering from injuries, Niki Lauda (Ferrari) came to Japan as the championship leader, having three points more than James Hunt (McLaren). On October 24, under the heavy rain, Mario Andretti started from pole in the #5 Lotus 77. Hunt was second on the grid, Lauda behind him on P3.

Lauda withdrew from the race after just one lap, saying that weather conditions were too dangerous. Hunt stayed in the race, finished third and took the championship title. The race winner was Andretti. This epic season was described in a movie ‘Rush’.

In 1977, the Japanese Grand Prix was again the final round of the championship. Niki Lauda already secured championship title and he didn’t come to Japan. The race at Fuji Speedway took place on October 23. Unlike the previous year, the weather conditions were perfect.

Mario Andretti was the fastest qualifier again. McLaren’s James Hunt took the lead at the start and won the race, ahead of Carlos Reutemann (Ferrari) and Patrick Depailler (Tyrrell). The race was marred by the fatal accident on lap 5 when Ronnie Peterson and Gilles Villeneuve had a contact at the end of the straight. Villeneuve’s Ferrari flew into a crowd that was standing in a restricted area, killing a marshal and a photographer and injuring several others. 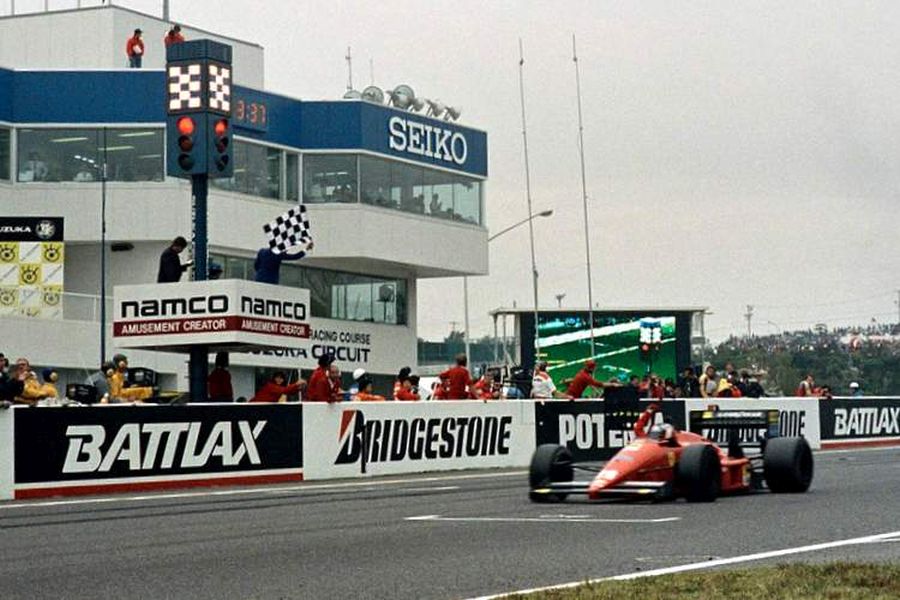 The Japanese Grand Prix came to Suzuka in 1987

The season was marked by a duel of Williams teammates Nelson Piquet and Nigel Mansell. The British driver suffered back injuries in a crash during the practice for the Japanese Grand Prix, prematurely ending a season and handing a title to Piquet. The fastest qualifier and the race winner was Gerhard Berger (Ferrari).

In 1988, the Japanese Grand Prix was the penultimate round of the season and the race was a title decider again. This time, McLaren-Honda teammates Ayrton Senna and Alain Prost fought for the title.

Senna was the fastest qualifier but he stalled on the grid and Prost took the lead. After dropping to 14th place, Senna made a heroic progress on the wet track and finally took the lead on Lap 27. He won the race in front of his teammate Prost and, thanks to the points system that counted the best 11 results, he secured enough points for his first championship title. 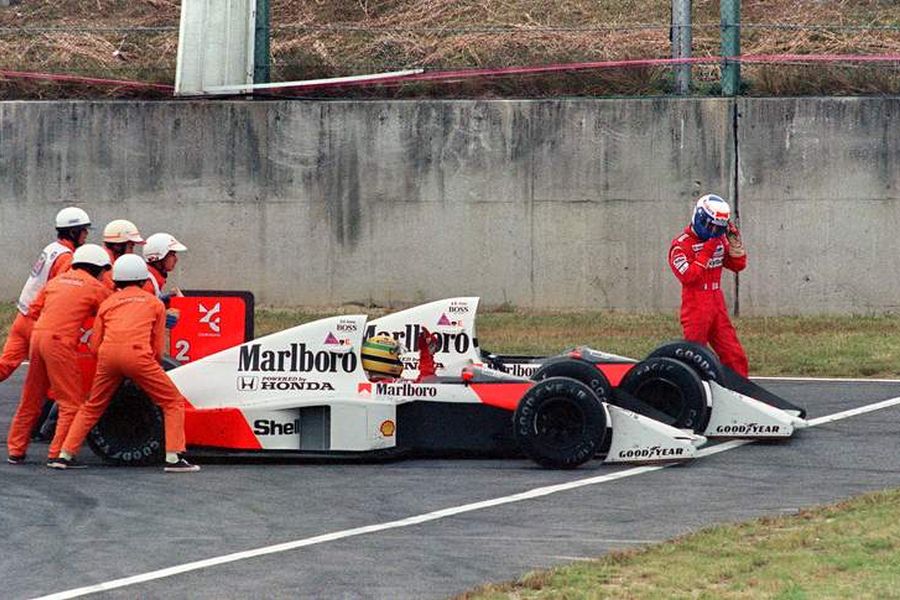 The 1989 Japanese Grand Prix also deserved a place as one of the most controversial races in the history of Formula 1. McLaren-Honda dominated in the championship again, with Alain Prost and Ayrton Senna scoring ten of fourteen wins before they came to Japan. Their rivalry was like the inner-team war and Prost had 16 points more than Senna, so Senna had to win to stay in the title fight in the season’s finale in Australia.

He started from pole but Prost took the lead at the start. On lap 47, Senna tried to pass Prost and they collided, sliding off the track. Prost came out of a car, knowing that Senna’s retirement would give him the title, but Senna received a help from track marshals and he rejoined the race. He stopped to change the nose of a car and he still managed to cross the finish line as a winner. However, Senna was disqualified after the race, handing a victory to Alessandro Nannini (Benetton) and the championship title to Alain Prost. 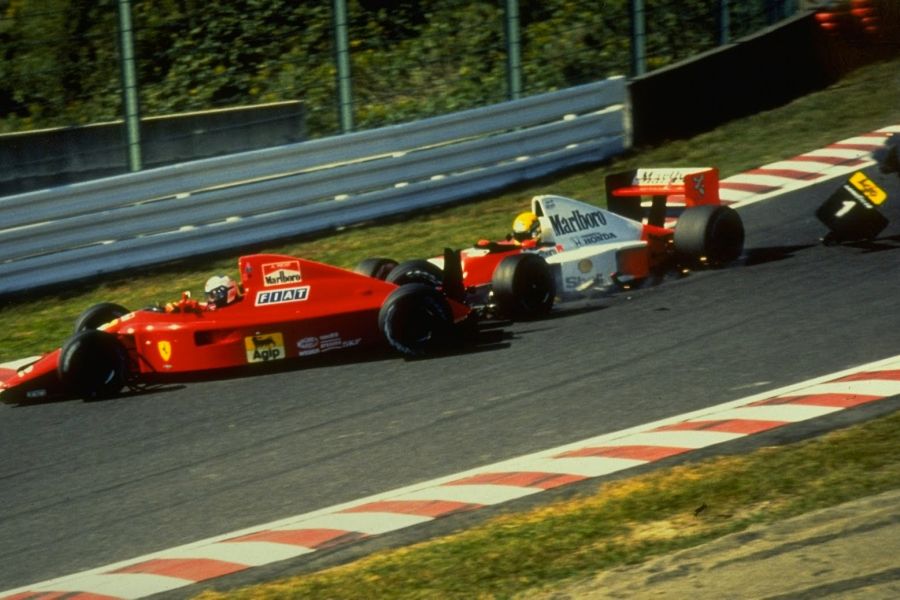 The 1989 race was not a peak of controversy between Senna and Prost because in 1990 they crashed again. This time, McLaren driver Senna was the championship leader, nine points ahead of Prost who was driving for Ferrari. Senna was the fastest qualifier and he started the race from pole, on the dirtier side of the track, so he lost an advantage over Prost and they came together to the first corner.

The crash occurred and both cars went to a gravel trap and then hit into the tyre wall. This accident meant that Senna won his second championship title because Prost could not catch up him in the season’s finale in Australia. In a shadow of the title-deciding crash, Nelson Piquet (Benetton) won the race ahead of his teammate Roberto Moreno and Aguri Suzuki (Lola).

Senna handed a victory to teammate Berger in 1991

In 1991, McLaren’s Gerhard Berger became the first two-time winner of the Japanese Grand Prix, thanks to his teammate Ayrton Senna who let Berger win as a ‘thank you’ gesture for his support over the season. Senna finished second in the race and secured his third championship title even before season’s finale. His main title rival Nigel Mansell retired early in the race.

A year earlier, in October 1992, Riccardo Patrese gave the first win to Williams at Suzuka and scored his last F1 win. Another man who won in Japan driving Williams was Damon Hill, scoring two wins at Suzuka in 1994 and 1996. 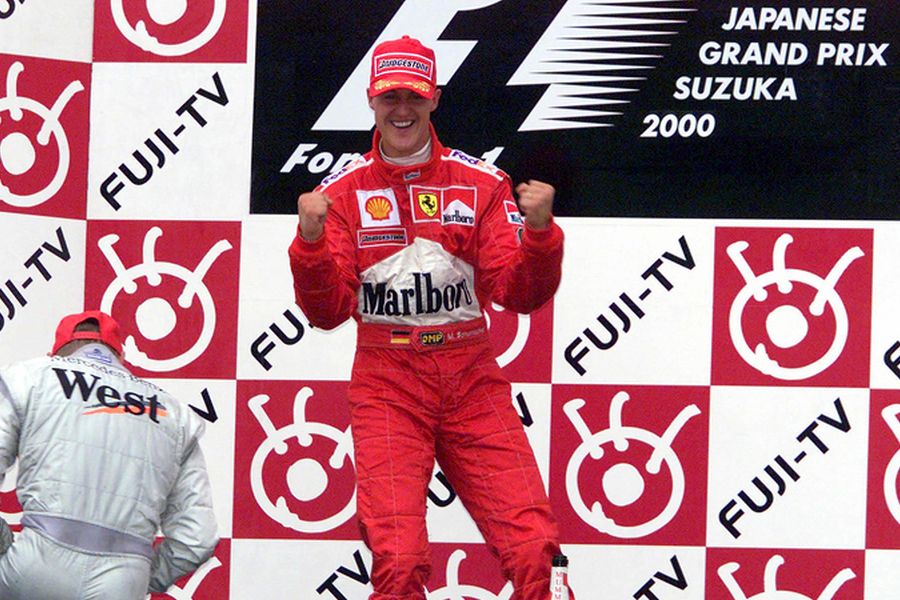 Michael Schumacher on a podium of the 2000 Japanese Grand Prix

Michael Schumacher scored his first victory in Japan in October 1995, driving the #1 Benetton-Renault. It was his ninth win of the season, matching the record set by Nigel Mansell in 1992. Schumacher dominantly won the championship that year. He returned to the top podium spot at Suzuka in 1997. This time, he was driving for Scuderia Ferrari, beating Heinz-Harald Frentzen (Williams) and Eddie Irvine (Ferrari).

After two Japanese wins of Mika Häkkinen (McLaren-Mercedes) in 1998 and 1999, Michael Schumacher became the first three-time winner in 2000. He triumphed again in Japan in 2001 and 2002, and the sixth win followed in 2004. In 2003, the winner was Schumacher’s teammate Rubens Barrichello. 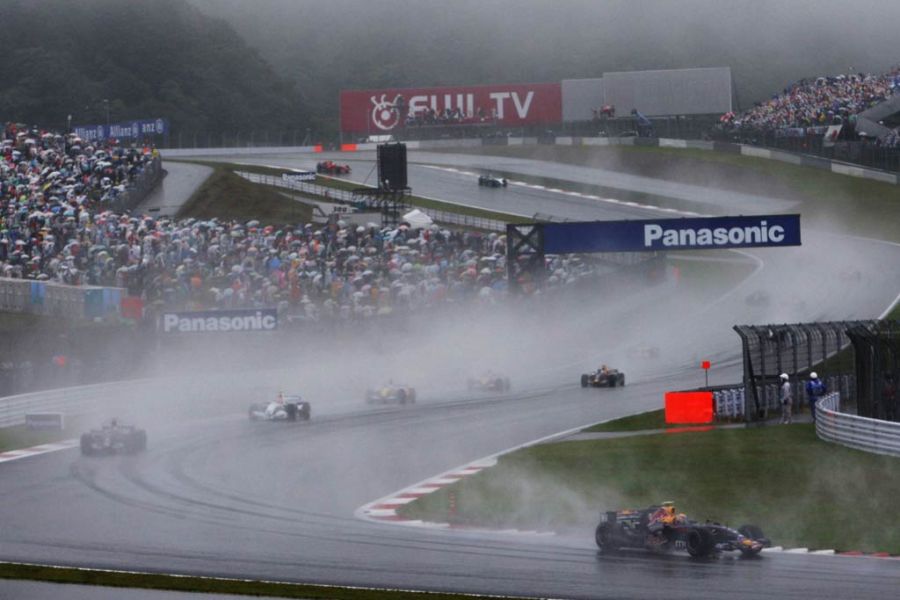 Japanese Grand Prix at Fuji in 2007

In 2005, Kimi Raikkonen won the Japanese Grand Prix for McLaren. A year later, Fernando Alonso triumphed at Suzuka and won the championship. Then, in 2007, the Japanese Grand Prix returned to Toyota-owned and rebuilt Fuji Speedway. The event was marked by treacherous weather and was started behind the safety car. The pole-sitter Lewis Hamilton (McLaren) survived an early brush with Robert Kubica to win the race ahead of Heikki Kovalainen (Renault) and Kimi Räikkönen (Ferrari). 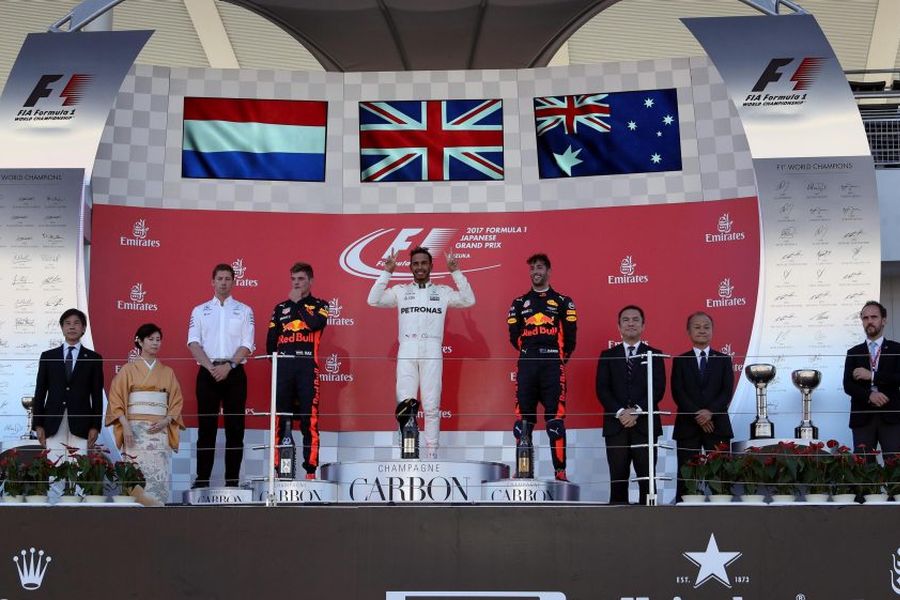 Suzuka has a deal for Japanese Grand Prix until 2021

There was a deal that Fuji and Suzuka would share hosting duties from 2009 and the Japanese Grand Prix returned to Suzuka in 2009. However, due to an economic crisis, Toyota pulled out and Fuji didn’t host the race in 2010. Suzuka was hosting all events since then. Currently, Suzuka has a contract for the Japanese Grand Prix until 2021. 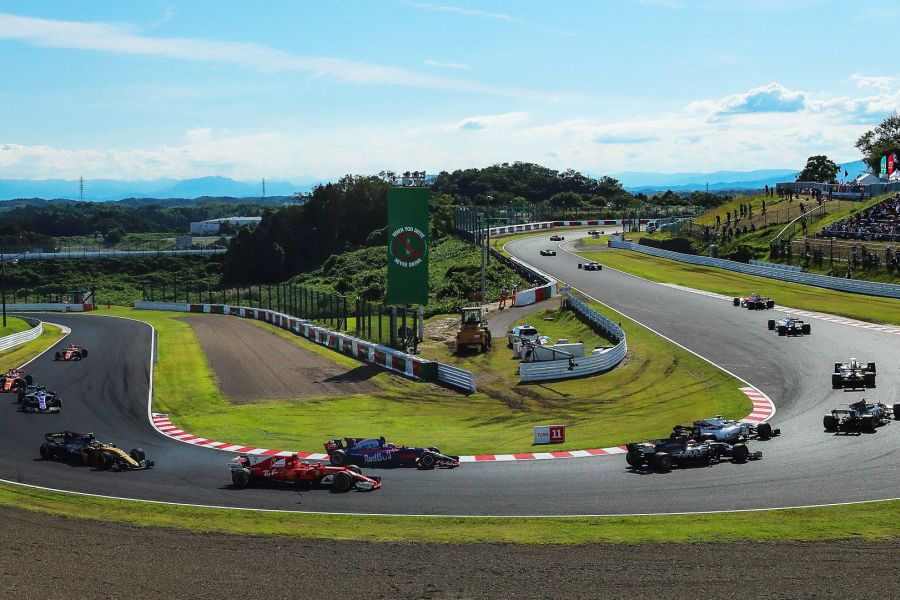 Jules Bianchi died after  a crash at Suzuka

The 2014 Japanese Grand Prix is unfortunately marked as the last F1 event related to the death of some driver. On October 5, 2014, Marussia driver Jules Bianchi crashed out into the tractor crane which was helping to move Adrian Sutil’s car. The race was stopped and shortened to 46 laps instead of planned 53 laps.

Bianchi sustained severe head injuries from which he died in France on July 17, 2015, becoming the first F1 driver to lose a life in an accident after Ayrton Senna’s death in 1994. 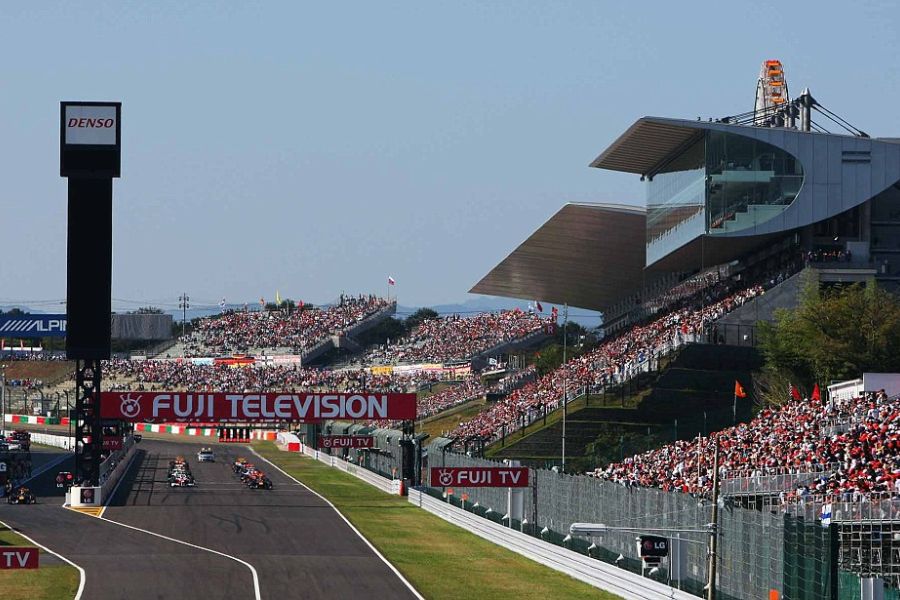