Lime Rock Park, situated in Lakeville, Connecticut, is one of the most significant historic road racing circuits in North America, along with Road America, Laguna Seca, and Watkins Glen. All of these famous tracks were opened in a short period of time in the mid 1950s – Road America in 1955, Watkins Glen in 1956, Laguna Seca and Lime Rock in 1957. Obviously, it was the golden age of road racing in America. 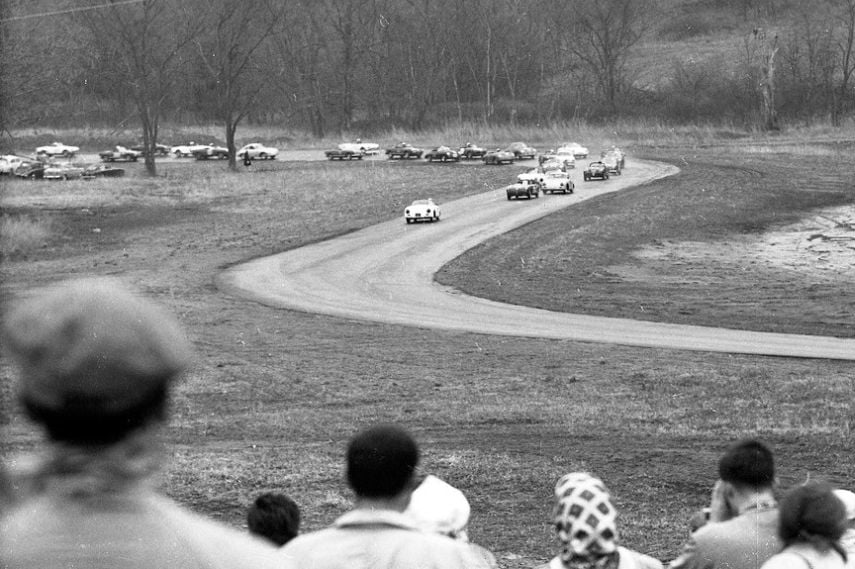 Lime Rock Park circuit pictured in 1959. The track still has the same layout

Jim Vaill is the ‘father’ of Lime Rock Park

The 1.5-mile Lime Rock track was born thanks to the local racing enthusiast Jim Edward Vaill. According to Rich Taylor, an author who chronicled the history of the track, in the spring of 1955, Jim Vaill often raced an MG-TC owned by his friend Jack Fisher, in a gravel pit on Vaill family property in Lime Rock. He was approached by people from SCCA (Sports Car Club of America), who proposed to Vaill to build a permanent road racing course.

The layout of the track was dictated by nature

Using an aerial survey of the 325-acre park in a valley owned by his family (and with his father’s blessing), Vaill laid out a plan for a 1.5-mile circuit and the construction began. Although Vaill had to redirect a small river, the track’s shape was otherwise dictated by nature, including the thick woods that surround it and its rolling hills, which provide an automotive amphitheater ideal for picnickers. 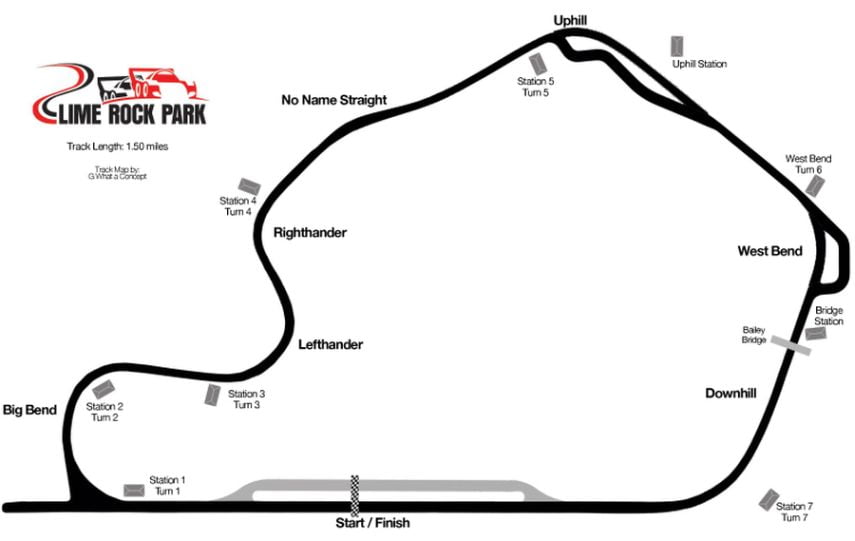 Racing is forbidden on Sundays

After the track was opened in April 1957, Vaill faced another challenge. Although the community of Lime Rock approved the track, a group of local residents, supported by Trinity Episcopal Church, filed a suit against it. In May 1959, a judge ruled that the racing could continue at Lime Rock Park, but with two key restrictions that are still in effect: not on Sundays, and if the cars’ engines were unmuffled for only 10 weekends a year.

Skip Barber is the current owner

In 1963, Jim Vaill sold the track and focused on real estate business. The current owner of the circuit is the former driver Skip Barber, who started a chain of high-performance driving schools, including the one based at Lime Rock Park. It is interesting that it has the same layout as in April 1957 when it was opened. 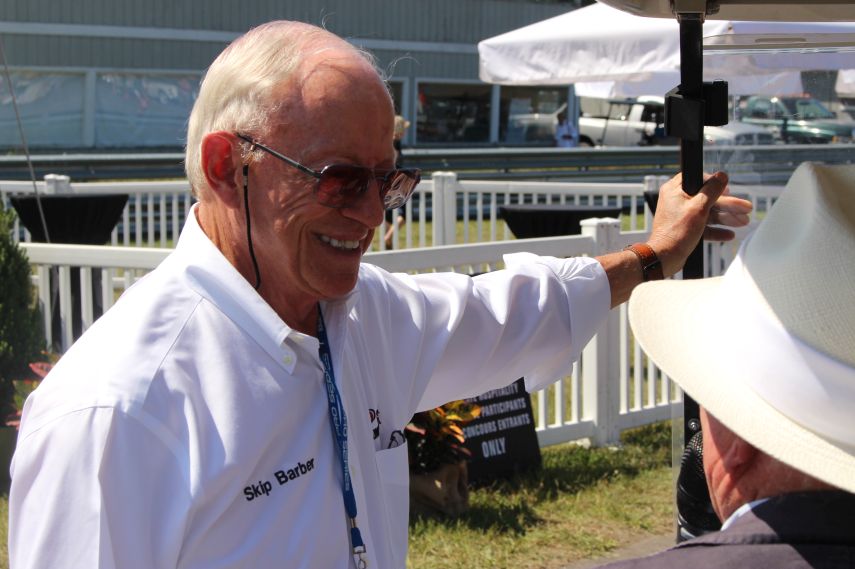 The track is 1.5-mile (2.41 km) long, although for years, the track was listed as being 1.53-mile long. The story says that right after it was built, someone used the odometer in a Chevy to measure the length of the track, and 1.53 was written as the official number.

Following the 2008 reconstruction, Lime Rock’s officials measured all four possible configurations and as it turns out, each was 1.5 miles long, plus or minus a few hundred feet. The classic configuration of the track has seven turns, while three optional layouts can be set. 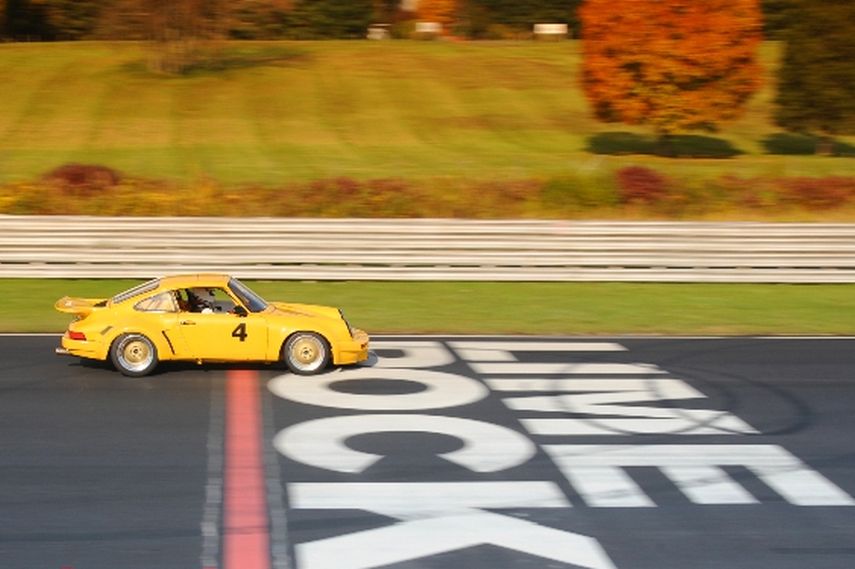 The first race on the new circuit was held on April 28, 1957. It was a mix of the G-Production class and MG class. As it was recorded, the first ever winners at Lime Rock Park were Ted Sprigg in Alfa Romeo Giulietta and Charles “Skip” Callanan in MG TC.

In 1959, Lime Rock Park was the venue hosting the most famous Formula Libre race in the United States. It was a race that had a significant influence on the American motorsport because of the major media coverage and the fact that lots of world famous drivers competed. The sensational winner was Rodger Ward, who was driving a midget and won ahead of much more powerful F1 and sports cars. 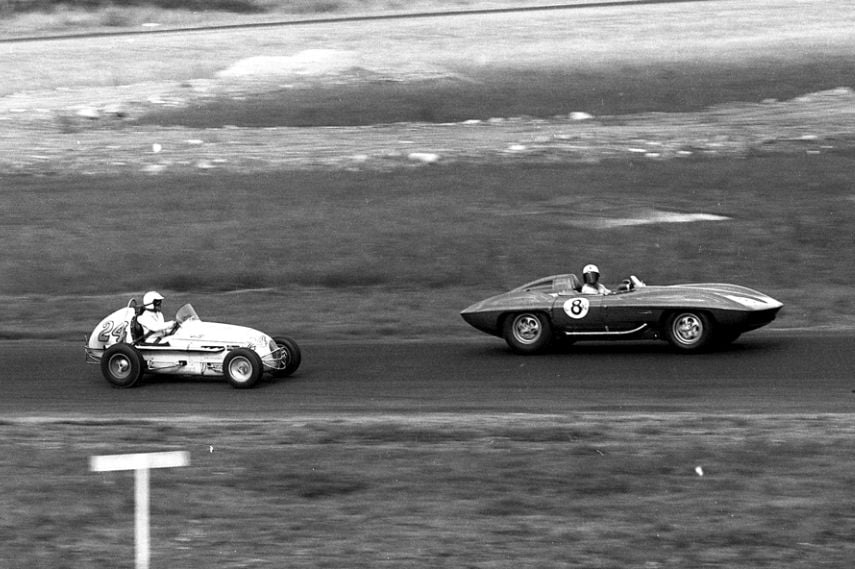 Paul Newman was an honored guest at Lime Rock

The track became popular because many famous drivers loved it, but one of the best promoters was an actor, racer, and a team owner Paul Newman who lived in Connecticut. Almost all of the American motorsport’s greats have raced at Lime Rock Park since its opening.

During the 1960s, SCCA organized championship races at the Park, whilst the 1970s and 1980s were marked with Can-Am, F5000, Trans-Am, Atlantic, Camel GTP, and ALMS championships. From the mid-1990s onward, Lime Rock hosted NASCAR racers and IMSA prototype drivers. 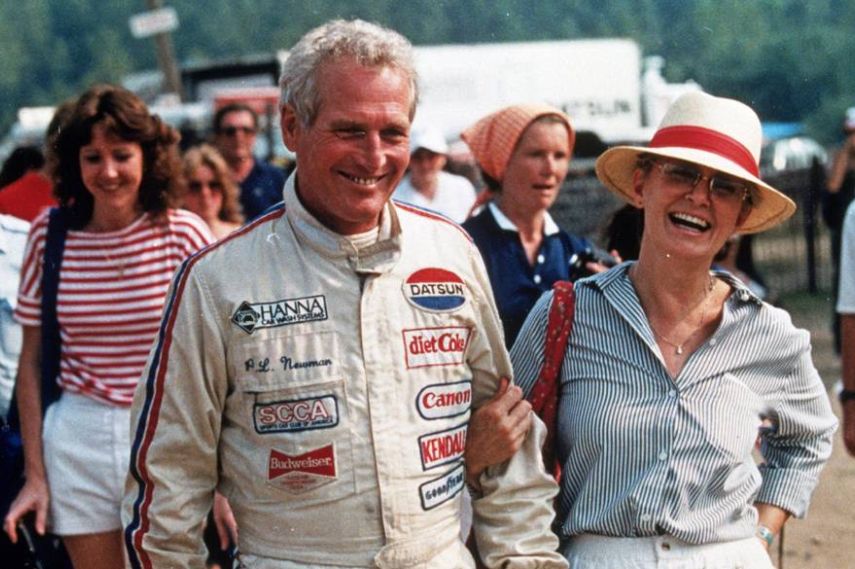 Between 1958 and 1964, multiple winners of SCCA races were Roger Penske and George Constantine. From 1986 to 1992, the race was a part of the IMSA GT Championship. The only two-time winner was the New Zealander Steve Millen, but the most famous winner was Hans-Joachim Stuck in 1989, driving Audi 90 quattro. 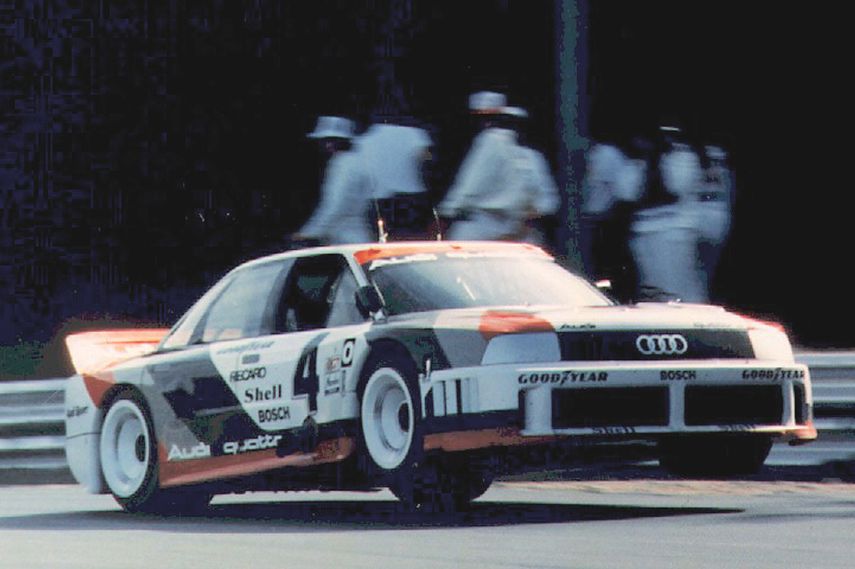 From 2004 to 2013, the race was a part of the American Le Mans Series. The former F1 driver JJ Lehto and his partner Marco Werner took the victories driving the Audi R8 prototype in 2004 and 2005. Two-time winners were also Germans Lucas Luhr and Klaus Graf, who won in 2012 and 2013 driving HPD ARX-03a, a prototype of Muscle Milk Pickett Racing. 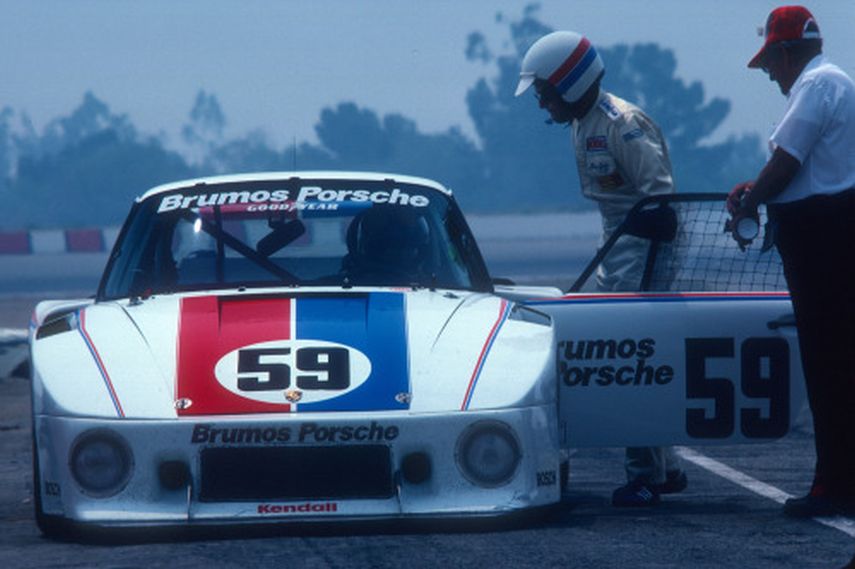 The record holder with most wins is Peter Gregg who won five times between 1973 and 1979, scoring fantastic results in Porsche Carrera RSR and Porsche 935. Al Holbert collected four wins between 1975 and 1987, while Max Angelelli scored four consecutive victories from 2010 to 2013. It’s interesting that Angelelli partnered Ricky Taylor three times, while the co-driver in his fourth victory was Ricky’s brother Jordan. 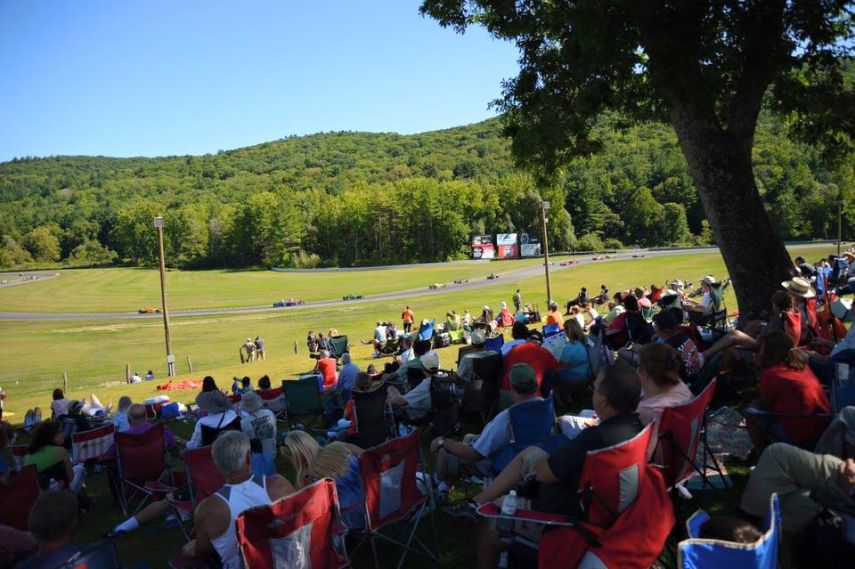 Lime Rock Park is a racing circuit ideal for picnickers

The track is ideal for picnickers

Lime Rock Park is also popular among motorsport fans because it offers great spectator view without grandstands. As its name says, this racing circuit is actually a park, so spectators can sit under a tree, have a picnic and watch races.

Under Skip Barber’s ownership, Lime Rock has been serviced by two major multi-million dollar renovations. The first was in 2008, when the entire track surface was repaved and a number of safety elements were brought to the latest standards. Crucially, the project was engineered with an intention not to change any aspect of its original track design and layout, making today’s final look of the circuit similar to its initial one. The braking, turn-in, apex and track-out points a driver experiences today are the exact same as those Mario Andretti, Dan Gurney, Skip Barber, Sam Posey and dozens of other legends navigated back in the day. 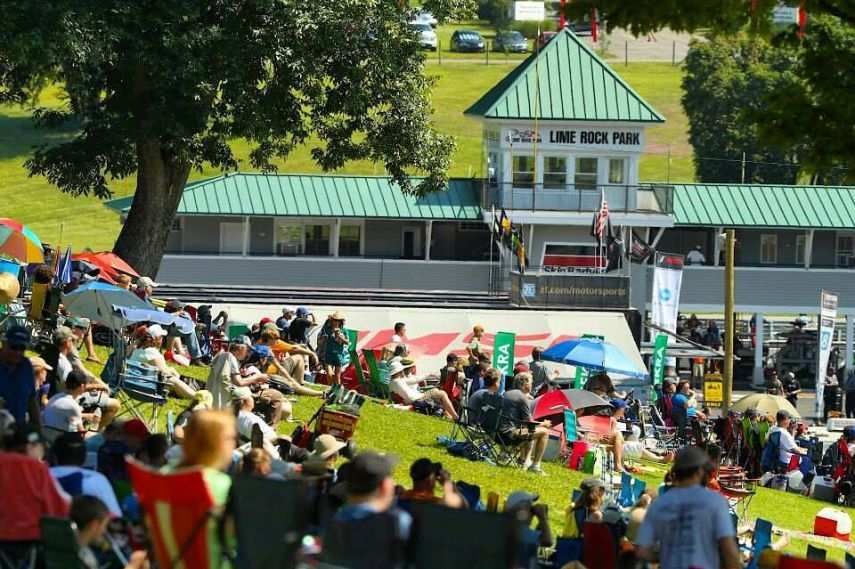 One more renovation ahead of the 60th anniversary

The second major renovation, named Road to 60 Project, got underway in late 2014. As Lime Rock prepares to celebrate its 60th anniversary in 2017, millions of dollars have been invested in upgrading every part of Lime Rock that is not the racing surface itself – spectators areas, walkways, paddocks, restrooms, gardens, ponds, and landscaping.

So, after almost 60 years of its existence, Lime Rock Park is a renewed modern racing facility, but in fact, it is the same old historic Lime Rock as it was in 1957.