Laguna Seca Raceway - One of The Most Popular American Race Tracks

The track was opened in 1957 near Monterey, California, and since then it hosted many premier car and motorcycle series, for instance, the Champ Car/IndyCar, American Le Mans Series and Rolex Sports Car Series, US Road Racing Championship, Can-Am, Trans-Am and Moto GP. In the past couple of years, the main racing series at Laguna Seca are the World Superbike Championship, IMSA SportsCar Championship, Indy Lights and Pirelli World Challenge. 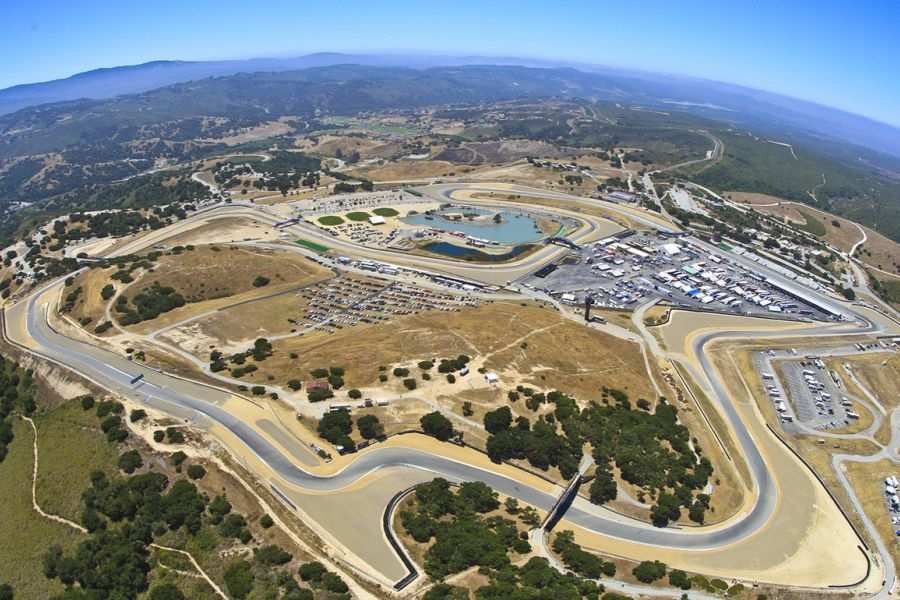 The 2.238-mile (3.6-km) race track is located in the area where once was a lake, which is how this track got its name. Laguna Seca means ‘dry lake’ in Spanish. The idea of constructing the race track in the place of the former Fort Ord US Army base was born in 1956, when racing was forbidden near the Pebble Beach’s street course. So, in 1957, the Laguna Seca Raceway was opened near the famous Laguna Seca Ranch.

The cost of construction of the original road racing course was $1.5 million, and it was raised by some local organizations and individuals. The layout of the new Californian racetrack was designed to look like a 1.9-mile (3.05-km) circuit with nine turns, driven in the anti-clockwise direction. 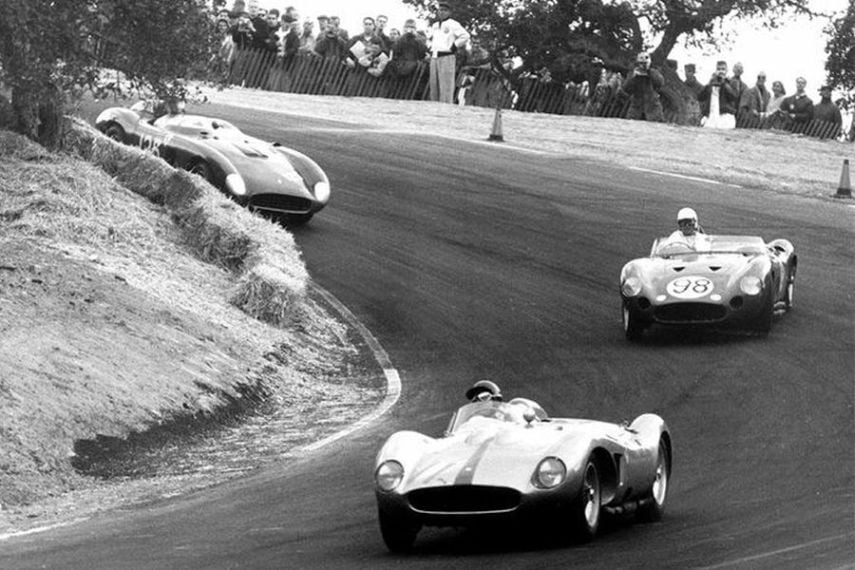 Victory for Ferrari in the first race at Laguna Seca

The first event on the new race track was held on November 9, 1957. It was a sports car race as part of the SCCA National Sports Car Championship. The first ever Laguna Seca winner was Pete Lovely, who was driving a Ferrari 500 TR.

After five years, the Laguna Seca 150 event was held again in 1963, as part of the US Road Racing Championship. It stayed in the USRRC calendar for almost 50 years, with some of the world’s famous drivers entering the winners list, like Chuck Parsons, Jim Hall or Mark Donohue.

During those years, the Californian racetrack became very popular, especially its combination of turns 8 and 8A, named the Corkscrew. In the next couple of years, it became one of the most popular turns in the world and the signature turn for Laguna Seca. The Corkscrew is special because of its elevation drop of 59 feet and due to blind crest and apex. The whole circuit has 180 feet (55m) of elevation difference. 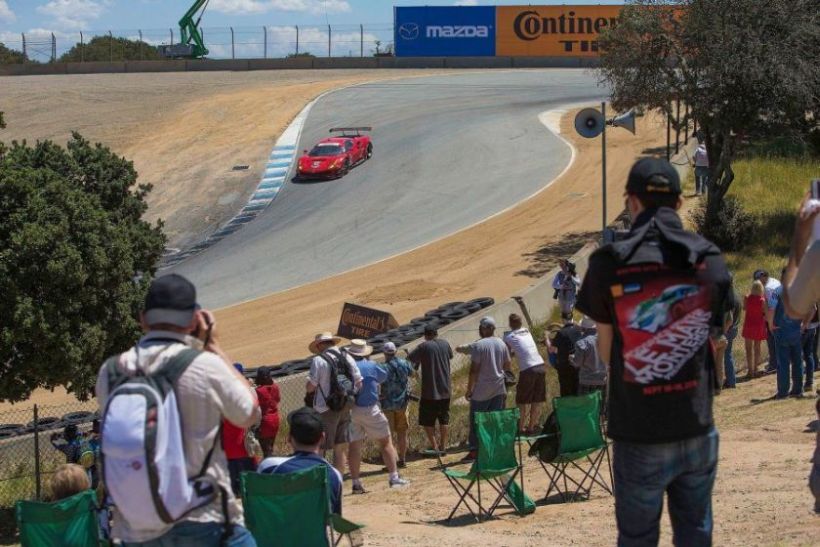 Spectator’s view of the Corkscrew

In 1973, the Monterey Triple Crown race became a part of the IMSA GT Championship. The race stayed in the calendar until the last season of the championship was converted into American Le Mans Series in 1999. The Laguna Seca Raceway was the regular host of the ALMS races until 2013 and the inauguration of the new IMSA United SportsCar Championship in 2014.

Le Mans-winning prototypes were regulars at the Laguna Seca

As one of the main racing venues for sports cars in America, Laguna Seca has witnessed some of the most amazing battles of the most sophisticated prototypes and glorious victories of cars that were also winning 24h Le Mans, for instance, Porsche 962, Audi R8 or Audi R10 TDI. During the 1970s and 1980s, the multiple winners at Laguna Seca were Al Holbert, Hans-Joachim Stuck, Peter Gregg and Klaus Ludwig. In the ALMS period, during the Audi domination, the drivers with most wins were Frank Biela, Allan McNish and Rinaldo Capello. 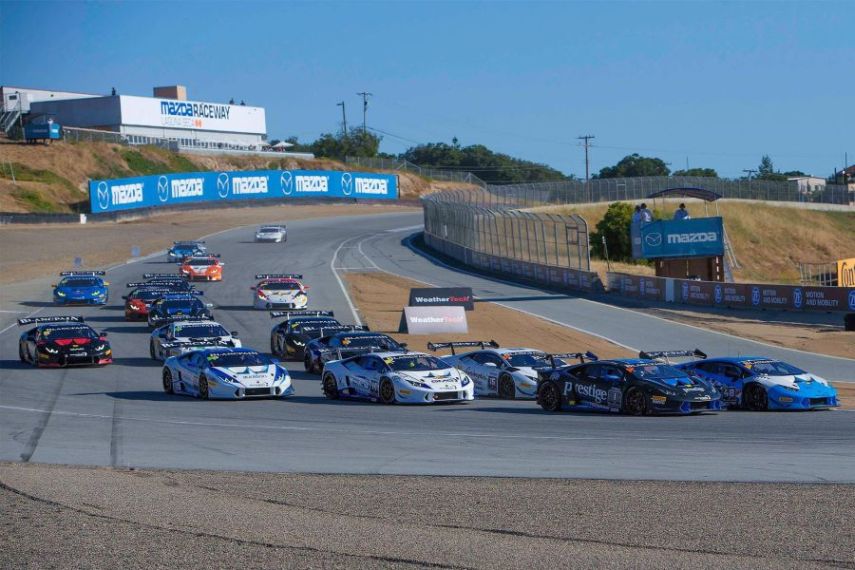 Although Laguna Seca was the mecca of sports car racers, many open-wheel racing series visited the Californian racetrack in the past, for example, the USAC Road Racing Championship, Can-Am, Formula 500 or A1 Grand Prix Series, but the major competition was the Indy Car Series between 1983 and 2004. Prior to the first visit of the Indy Car machines, some of the world’s motorsport legends left their victorious trails at Laguna Seca, winning the single-seater races. Stirling Moss, Roger Penske, Phil Hill, Bruce McLaren, Denny Hulme, Peter Revson, Brian Redman, Mario Andretti, Bobby Rahal, Al Unser and Al Unser Jr are names etched into the asphalt of Laguna Seca.

Record-holder Bobby Rahal has his own part of the track

The first winner of the CART Indy Car race at Laguna Seca held in 1983 was Teo Fabi. In the next four events, Bobby Rahal was the winner. With one victory in the Can-Am Series, Bobby Rahal is the record holder with five wins at Laguna Seca. That’s why one part of the track between turns 6 and 7 was renamed to Rahal Straight. The other two former racers who have turns named after them are Mario Andretti (Turn 2, Andretti Hairpin) and Wayne Rainey (Turn 9, Rainey Curve).

The track was lengthened in 1988

The major change in the track layout happened in 1988. To meet the demands of the FIM MotoGP events, the inner section between Turns 2 and 3 was added. The length of the track was increased to 2.2 miles (3.5 km). 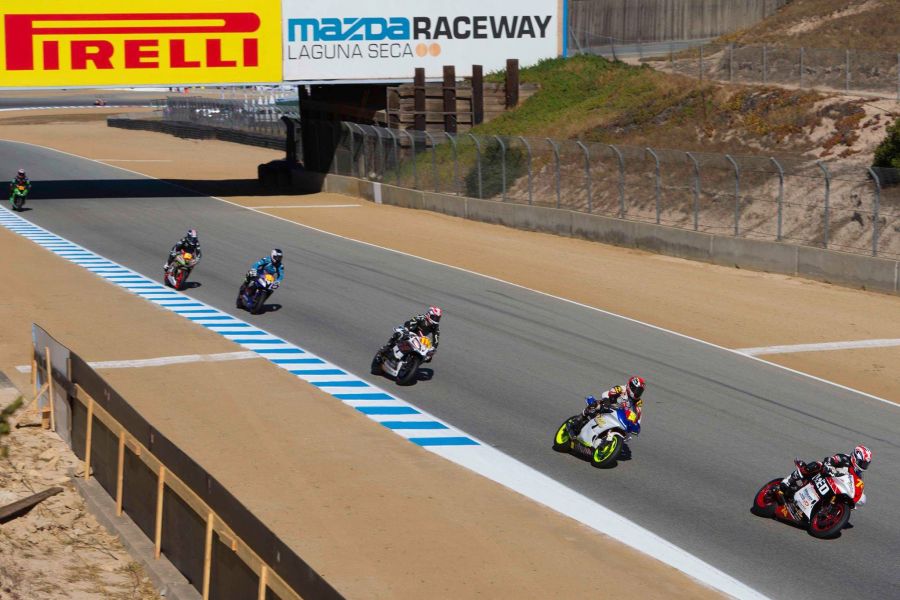 Laguna Seca hosted the United States Motorcycle Grand Prix for the first time in April 1988. The first winner was the American racer Eddie Lawson. In the next couple of years, three Americans won the American GP (Wayne Rainey, John Kocinski and Nicky Hayden). The last MotoGP race was held at Laguna Seca in 2013. The Superbike World Championship came to Laguna Seca in 1995 and the race is still marked on the calendar.

Following the 1988 improvements, the new track was taken into consideration for the Formula One Grand Prix, after the race was moved from Detroit in 1989. However, Phoenix got the F1 Grand Prix and Formula One cars have never officially run at Laguna Seca. 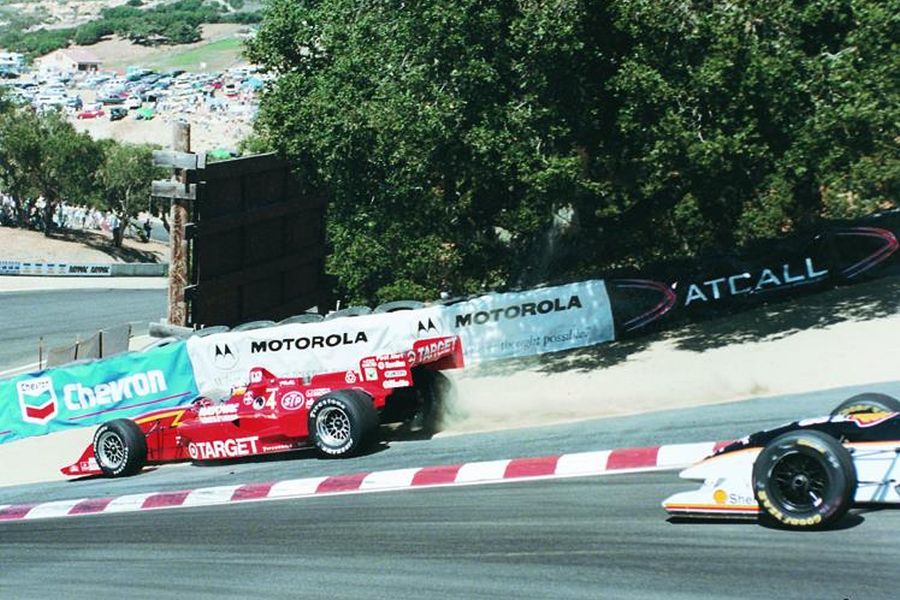 Alex Zanardi in the most epic pass at the Corkscrew

Californian round of the Champ Car season was moved to San Jose in 2005 and the American premium open-wheel series didn’t return to Laguna Seca. In 2007, the return was announced for 2008, but the eventual merger of Champ Car and Indy Racing League resulted in canceling the race.

In 2007, during the Champ Car training, Sebastien Bourdais broke the lap record of Helio Castroneves, setting the time of 1.05.880. In 2012, Marc Gene set the absolute and unofficial record of 1.05.786 with the Ferrari F2003 F1 car, during the Ferrari Racing Days event. 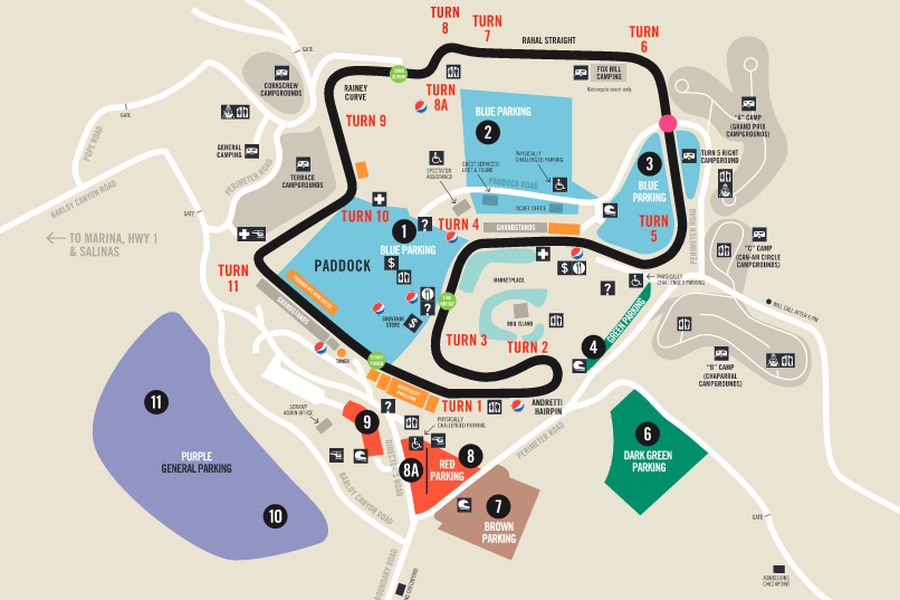 The schedule is full of special events

Laguna Seca is the venue of many events similar to Ferrari Racing Days because many manufacturers and other corporations have organized various anniversary celebrations and historic meetings there.

The most popular event is definitely the annual Monterey Motorsports Reunion. It was established by Steve Earle in 1974 as the Monterey Historic Automobile Races. The event is a part of the Monterey Car Week, which includes the Pebble Beach Concours d’Elegance and other events.

Video : Zanardi and Herta at Mazda Raceway Laguna Seca in 1996