Road America, located near the Elkhart Lake in Wisconsin, is one of the most popular road racing courses in the United States. The 4.0-mile (6.5-km) race track was opened in 1955, and since then it hosted the all-American premium racing series. The current schedule of races features IndyCar Series, IMSA WeatherTech SportsCar Championship and NASCAR Xfinity Series.

The story of Road America is similar to another popular road course, the Watkins Glen International, because both circuits originated from races which were originally held on the public roads in and around villages. In 1950, races were organized on the 3.3-mile course around the Elkhart Lake, while the 5.3-mile course was in use since 1951. 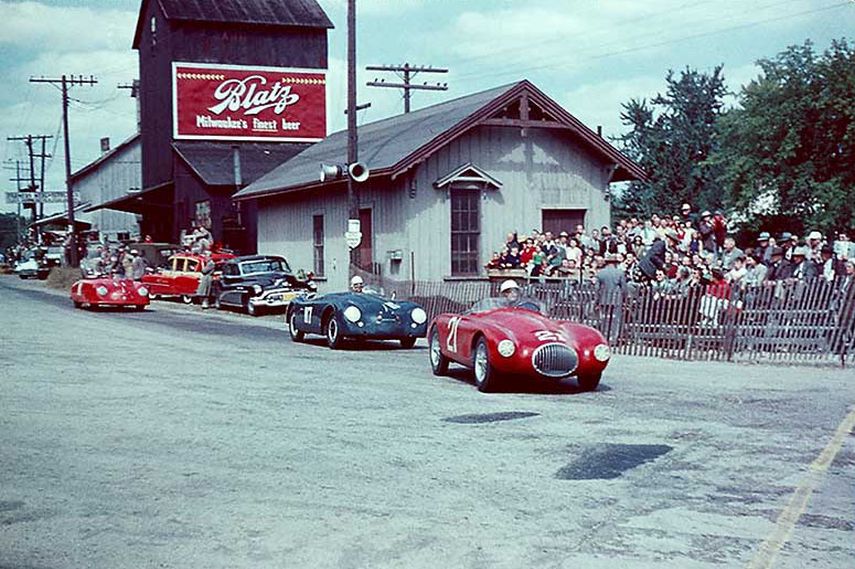 Public roads were replaced with the permanent circuit in 1955

After a few accidents at Watkins Glen, including one in which the child was killed, the state legislature banned racing on public roads, so motorsports enthusiasts had to find a solution. Watkins Glen had Cameron Argetsinger, and the Elkhart Lake had Clif Tufte.

He organized a group of locals and suggested the construction of a permanent race course to the Chicago Region of the Sports Car Club of America (SCCA). Tufte chose 525 acres of farmland, a few miles south of the village, and the idea became reality in 1955. 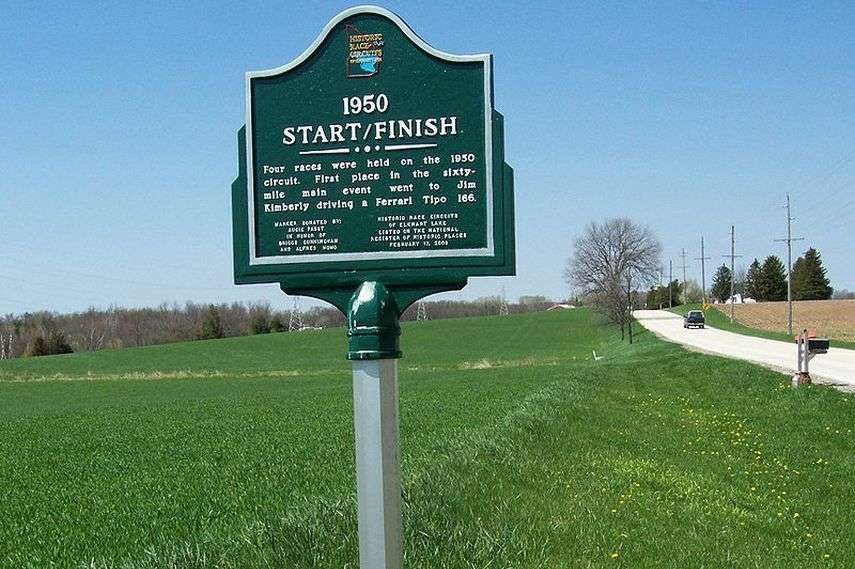 Four-mile track is unchanged for 60 years

The new 4.048-miles long track, with 14 turns, was officially opened on September 10, 1955. It’s interesting that the current track, more than sixty years later, has the same layout as the original circuit.

It’s the proof that Clif Tufte and his partners did a fantastic job, constructing the circuit which sweeps around hills and ravines, with turns offering everything that racing drivers needed. For many of them, the Road America is the best road course in the US. 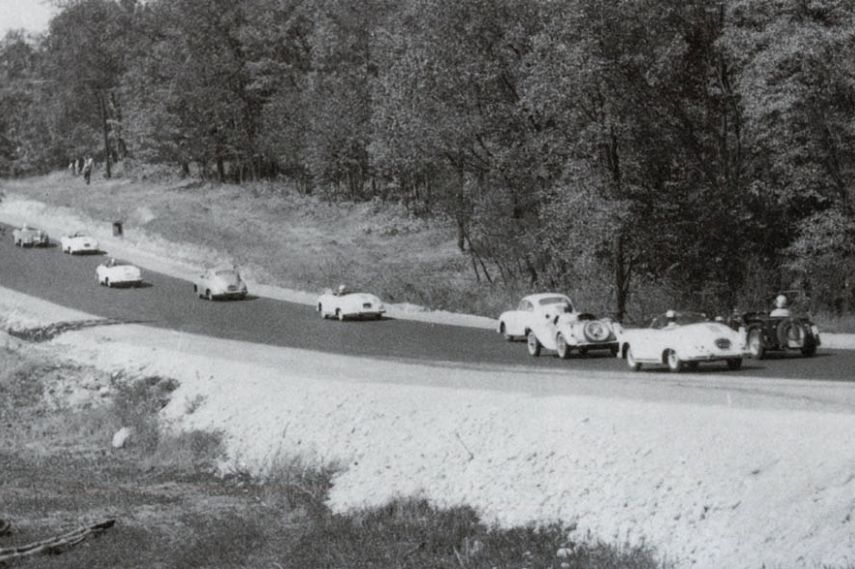 The first race at Road America in 1955

The first winner at Road America was Phil Hill

The hero of the first race at Road America was Phil Hill, at the time a 28-year-old Californian and a rising star of the American racing scene. After a fierce battle in the 148-mile race against Wisconsin’s best driver Sherwood Johnson, who was driving a D-Type Jaguar, Hill’s Ferrari 750 Monza crossed the finish line just a few inches ahead of Johnson’s Jaguar.

In August 1956, the NASCAR Grand National Series (now Sprint Cup Series) came for the first and only time to the Road America. At the time, NASCAR wasn’t so popular and just 10,000 spectators attended the two-day event. The winners were Paul Goldsmith (Jaguar Mk. VII) on Saturday and Tim Flock (Mercury) on Sunday.

In the following years, the race at Road America had a regular place in the SCCA National Sports Car Championship. In 1957, the race distance was 500 miles, so the official name of the race was Road America 500. The first winner of the 500-mile race was Phil Hill with Ferrari 315 Sport. 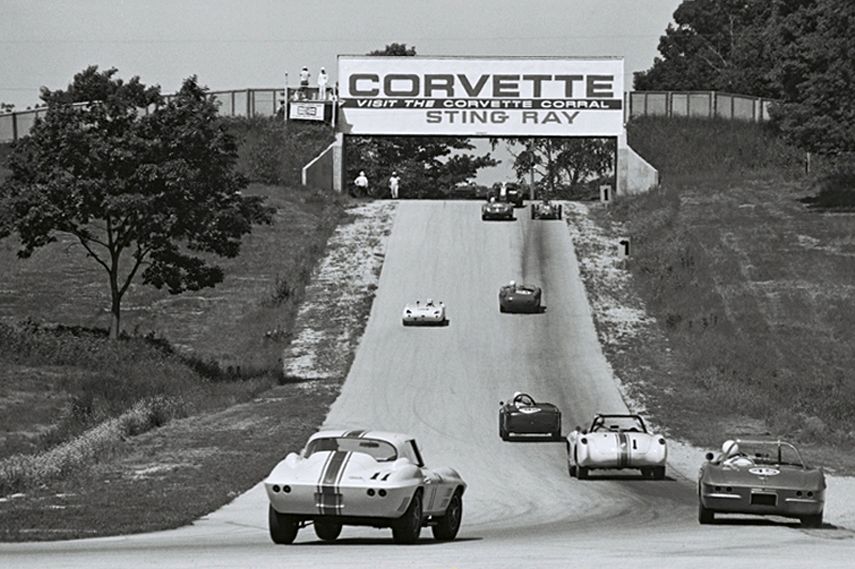 In 1962, which was the last race under the SCCA, Jim Hall and Hap Sharp won with Chaparral 1. It was the beginning of the story about unique Chaparral cars. Since 1963, Jim Hall started to build his own Chaparrals and in 1965, his Chaparral 2A was victorious at Road America. Between 1963 and 1968, the Road America 500 race was a part of the US Road Racing Championship.

After an 11-year hiatus, between 1968 and 1979, IMSA GT Championship came to Elkhart Lake in 1979. The first winners were David Hobbs and Derek Bell in McLaren North America’s BMW 320i Turbo. IMSA-sanctioned races were held at Road America since 1993.

The most successful manufacturer was Porsche with eight wins, including five victories of the fantastic Porsche 962. The most successful driver was Geoff Brabham, who scored three consecutive wins between 1988 and 1990, driving Nissan GTP ZX-T or Nissan NPT-90. Some other famous winners were Al Holbert, Al Unser Jr., Klaus Ludwig, Rolf Stommelen, Harald Grohs, Bobby Rahal, and Johnny Dumfries, among others.

The 500-mile race was canceled in 1994 and it was again revived in 2000, as a part of the Grand American Road Racing Championship. For two years in a row, the winning car was Ferrari 333 SP-Judd, driven by Didier Theys, Mauro Baldi and Freddy Lienhard. 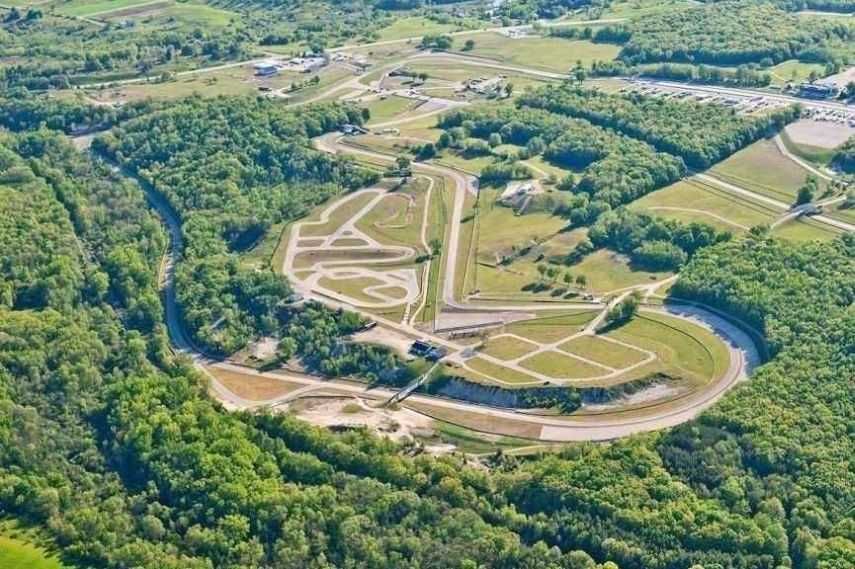 Audi was dominant in the ALMS series at Road America

From 2002 to 2013, the race was a part of the American Le Mans Series, running at varying distances of either 2 hours 45 minutes or 4 hours. In 2014, the race joined the schedule of the IMSA United SportsCar Championship after the merger of the ALMS and the Rolex Sports Car Series.

In recent years, Muscle Milk Pickett Racing’s drivers Lucas Luhr and Klaus Graf scored two wins (2011 and 2013), while Action Express Racing was the winning team in 2014 and 2015 with two different crews. In 2016, the renamed series IMSA WeatherTech SportsCar Championship will continue to race at Road America. 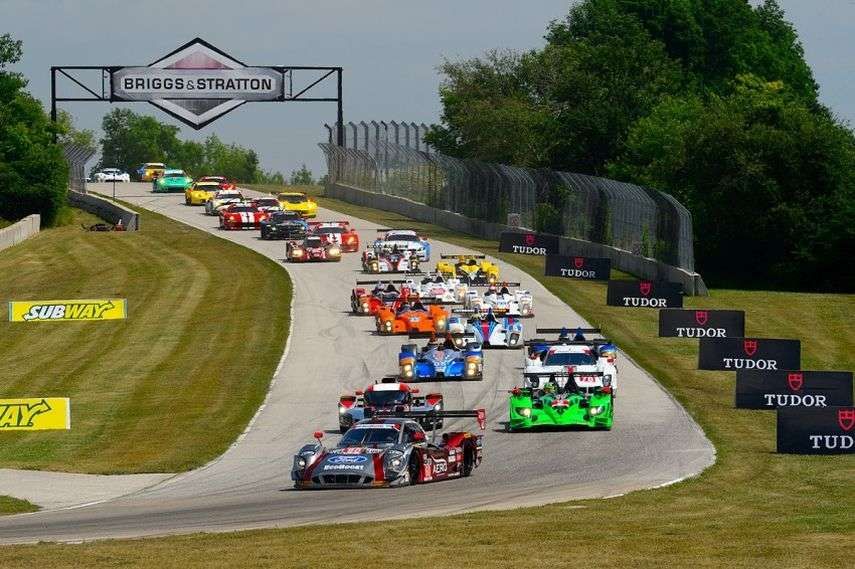 Road America is the venue of sports car races since 1955

IndyCar returns to Elkhart Lake in 2016

Of other American racing series, Champ Car and Indy Car Grand Prix races were regularly held at Elkhart Lake between 1982 and 2007, with the exception of 2005. After an 8-year hiatus, IndyCar Series returned to Road America in 2016.

Mario Andretti has a special place in the Road America Hall of Fame, not only because of five wins (two in Formula 5000 and three in the Indy Car Series) but also because of his role in the 2003 crisis, when CART officials and track owners filed lawsuits against each other. Andretti stepped in to mediate between two opposite sides and the race was held. The race was renamed the ‘Mario Andretti Grand Prix‘ in his honor. 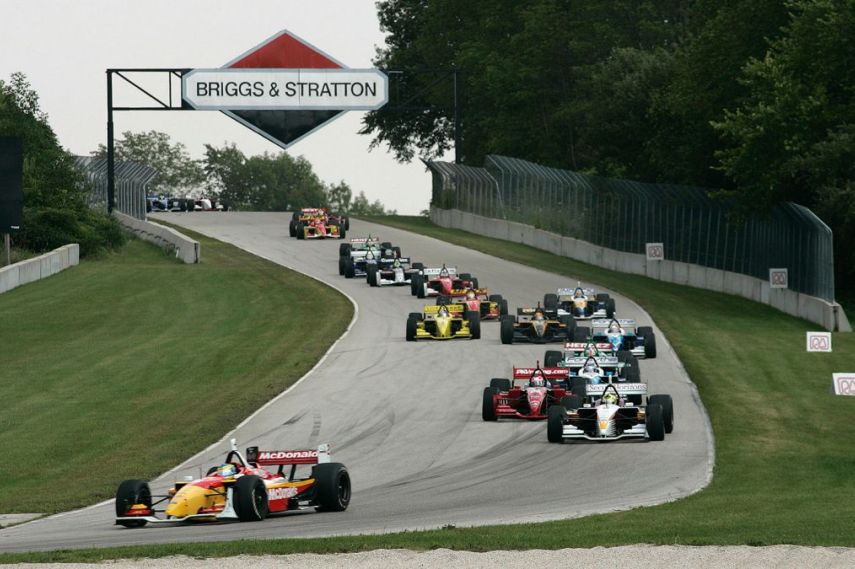 Jinxes and deers at Road America

On the list of the winners, there were no Unsers, although they ruled for many years in the American single-seater series. Some said that there is a jinx against Unsers, because both Al Unser Sr and Al Unser Jr led many times at Road America, but never won, losing in the last laps, crashing out or running out of fuel.

The racing circuit in Elkhart Lake was also the place of a few big crashes. The most unusual of all was the accident of Cristiano da Matta during the Champ Car test session in 2006, when he hit a deer and suffered severe head injuries. 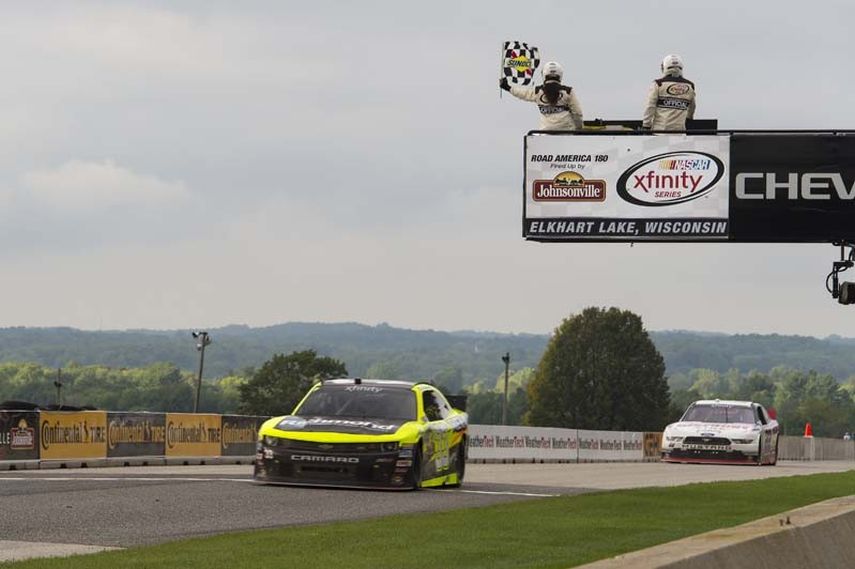 NASCAR was among the first competitions at Road America in 1956 and then left Elkhart Lake. The venue of stock car races in Wisconsin was the Milwaukee Mile, but in December 2009, it was announced that Road America would be the new location for NASCAR Nationwide Series (now Xfinity Series).

The first race was held on June 19, 2010, with Carl Edwards scoring the victory. In the following years, the winners were Reed Sorenson, Nelson Piquet Jr., AJ Allmendinger, Brendan Gaughan, and Paul Menard. 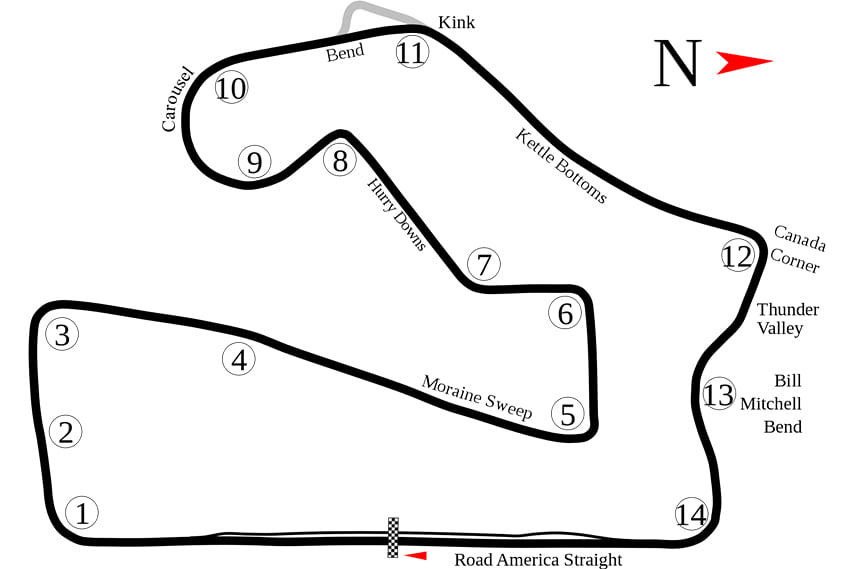 Road America layout is unchanged since 1955

The 4.0-mile layout of Road America’s racing circuit is basically unchanged since the opening. The track features many elevation changes. At the frontstretch, speeds of 200 mph (320 km/h) can be reached, but the most known part is the high-speed turn 11 named The Kink.

During the years, the main changes were made in the pit lane, paddock facilities and spectators area. The track had the open seating policy, so the spectators can walk around the circuit. Grandstands were constructed at a few locations, and together with permanent hillside seats it can accommodate more than 150,000 spectators. For the sake of better safety, changes on the track included enlargement of run-off areas and gravel traps, particularly at turn 1.

In 2007, the major construction projects included removing of the old Billy Mitchell bridge at turn 13 and replacing it with a new tunnel, which is now the main entrance to the paddock. 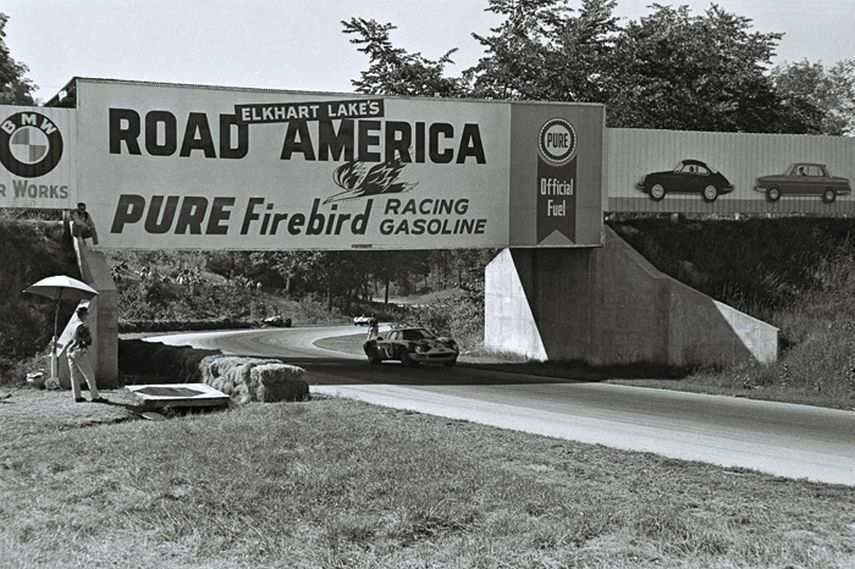 Mitchell’s Bridge was removed in 2007

In addition to the main course, Road America includes a 0.8-mile (1.3 km) karting track called Road America Motorplex, inside the Carousel turn. Before the karting track, there was an off-road racing circuit in the same place.

With activities on the main course, at the Motorplex and on the beautiful grounds surrounding the facility, Road America is hosting more than 400 events annually, attracting more than 800,000 visitors every year.

Video : Onboard lap around Road America