Yas Marina Circuit - The Most Expensive Race Track in The World

Yas Marina Circuit in the United Arab Emirates, the venue of the Abu Dhabi Formula One Grand Prix, is the most expensive racing circuit in history. The cost of construction is estimated to $1.322 billion. The circuit, designed by Hermann Tilke, was opened in 2009. The Abu Dhabi Grand Prix was the last round of the Formula One calendar in 2009 and 2010, then again from 2014 to 2016.

Yas Marina Circuit is the most most expensive F1 race track in the world, with the estimated cost of $1.322 billion.

Two years from idea to the grand opening

The idea about the racing circuit in Abu Dhabi was born in 2007, three years after the first Grand Prix Circuit in the Middle East was opened in Bahrain. The success of the Bahrain International Circuit and Bernie Ecclestone‘s everlasting search for the new F1 venues, in countries that can put some cash in his pockets, speeded up a birth of an idea. 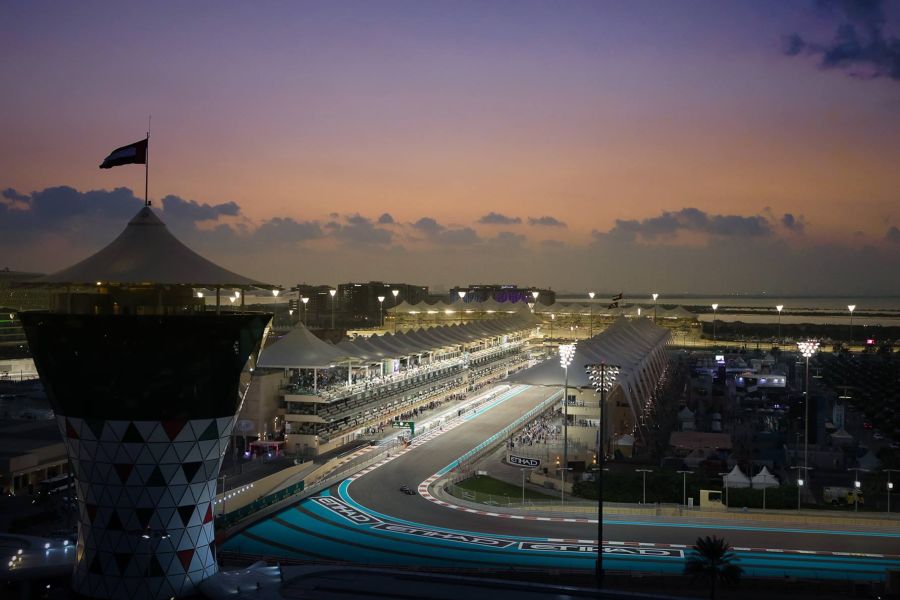 The newly-constructed artificial island, named Yas Island, about 30 minutes away from the United Arab Emirates capital Abu Dhabi, was chosen as the place for the new circuit. The Government of Abu Dhabi recognized an opportunity to put their town and country to the world’s motorsport map, so they started the project without asking about the price.

After two years of intensive construction, involving more than 14,000 workers, the new facility opened its doors to the world in October, getting the final approval from FIA and Grade 1 license. The total cost speaks for itself, everything that Hermann Tilke imagined became the reality and much much more.

Since the circuit was constructed in the Yas Marina area, it became some kind of rival track to the famous Monte-Carlo street circuit, with boats and yachts parked near the track. The central place is luxurious and futuristic Yas Viceroy Abu Dhabi Hotel.

To ensure visibility during the night races, the circuit features a permanent lighting system provided by Musco Lighting, similar to the system installed at the Losail Circuit in Qatar. Because of that, Yas Marina Circuit became the largest permanent sports venue lighting project in the world, taking that honor from the Losail.

With the seating capacity slightly over 41,000, the circuit has five grandstand areas (Main Grandstand, West Grandstand, North Grandstand, South Grandstand and Marina Grandstand). All of them are covered to protect spectators from the desert sun. The state-of-the-art pit building has 40 air-conditioned garages. 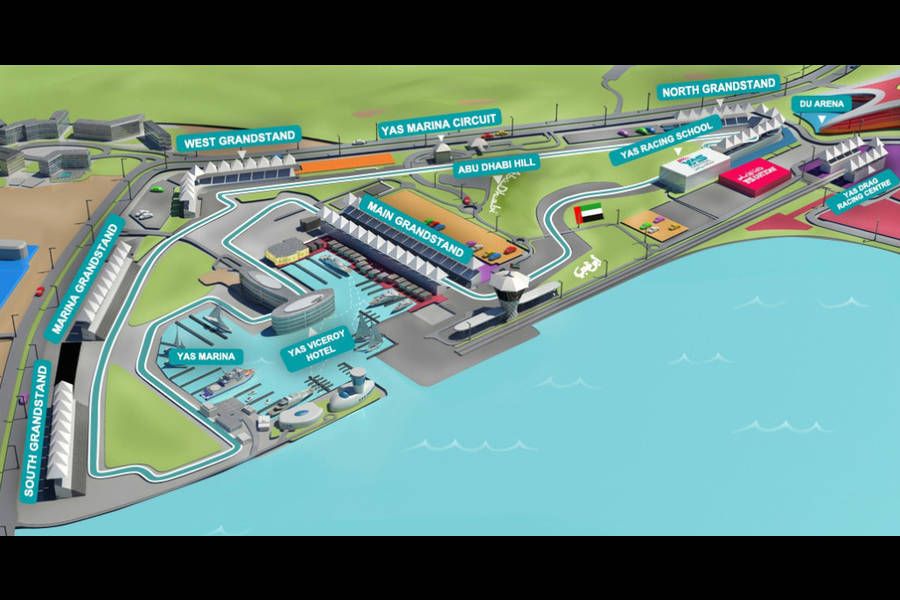 Unique pit road is passing through a tunnel

Another unique feature at Yas Marina Circuit is the pit lane exit. Because of the limited space on the outside of Turn 1, the pit road passes underneath the circuit and exits on the opposite side of the track. The 5,555m race track itself is also unique, with 21 turns. The circuit is running anti-clockwise, and most of the corners are medium or slow speed.

After receiving a final FIA approval on October 9, 2009, the circuit was ready for the inaugural Abu Dhabi Grand Prix on November 1. A week before the race, the circuit hosted a two-day GP2 Series test, which was the first official event there.

The 2009 Abu Dhabi Grand Prix was unique because it was the first Formula One’s day-night race. It started at 17:00 local time, under the daylight, but during the night the expensive lighting system was switched on. 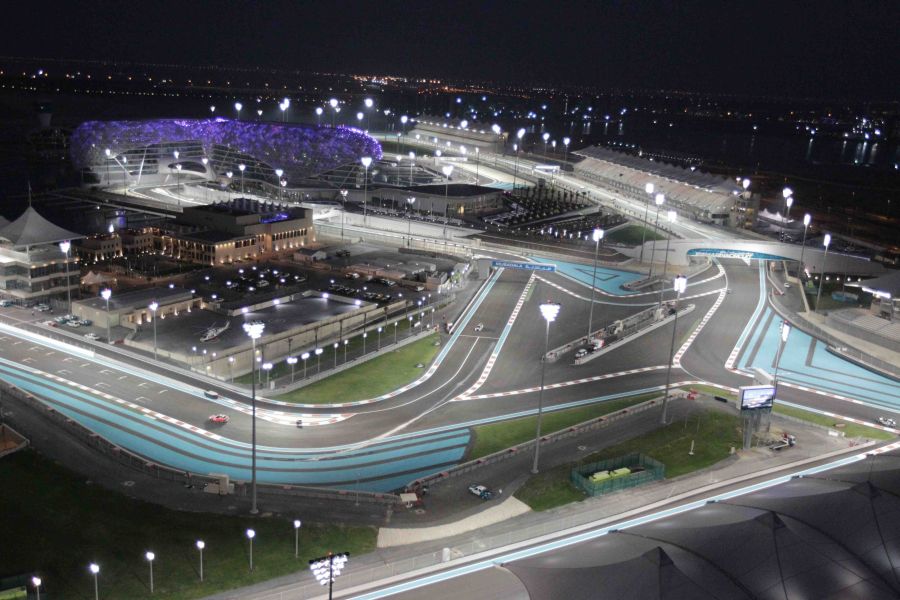 The winner of the inaugural race was Red Bull’s Sebastian Vettel, ahead of Mark Webber and Jenson Button. Since both championship titles (drivers and manufacturers) have been sealed in the previous round in Brazil, Abu Dhabi’s race was not decisive in the championship fight.

In 2010, the championship was held in Abu Dhabi, with four drivers in a contention for the title (Sebastian Vettel, Mark Webber, Fernando Alonso and Lewis Hamilton). Vettel has won the race for the second time and sealed his first title, becoming the youngest Formula One champion. Lewis Hamilton and Jenson Button completed the podium. 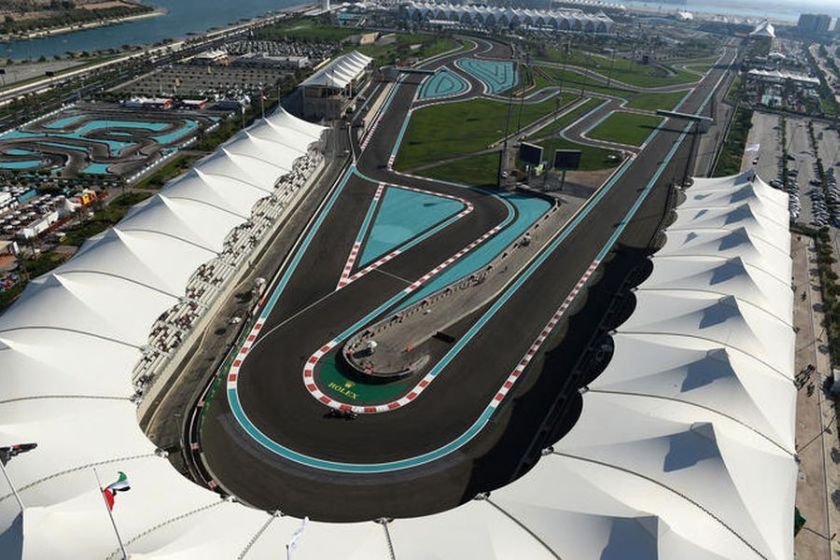 In 2011, the Abu Dhabi Grand Prix was the penultimate race of the championship. Lewis Hamilton has won the race, ahead of Fernando Alonso and Jenson Button.  In 2012, Kimi Raikkonen scored a victory. In 2013, Abu Dhabi Grand Prix was the 17th round (out of 19) but the race winner Sebastian Vettel and his team Red Bull already secured their titles.

The 2014 Abu Dhabi Grand Prix was unique because double points were awarded. It was the last championship round again. Lewis Hamilton won the race and took his second title. The point-system was back to normal in 2015 when Nico Rosberg scored his first Abu Dhabi victory.

There were more much more events besides Formula 1

Besides Formula One, the circuit is currently hosting single-seater series (GP2 and GP3). Previously, it hosted overseas rounds of the Australian V8 Supercars Championship (2010-2012), the short-lived FIA GT1 World Championship and many other GT races. The first Gulf 12 Hours was held in January 2012 and two more times after that.

Video : A lap around Yas Marina Circuit with Sebastian Vettel