The Alex Job Racing is an American racing team, founded by Alex and Holly Job in 1988, which currently competes in the IMSA SportsCar Championship. Since its foundation, AJR was running mostly Porsche GT cars, gaining greatest success in the American Le Mans Series between 2002 and 2013, with five drivers’ titles and four teams’ titles in GT category. 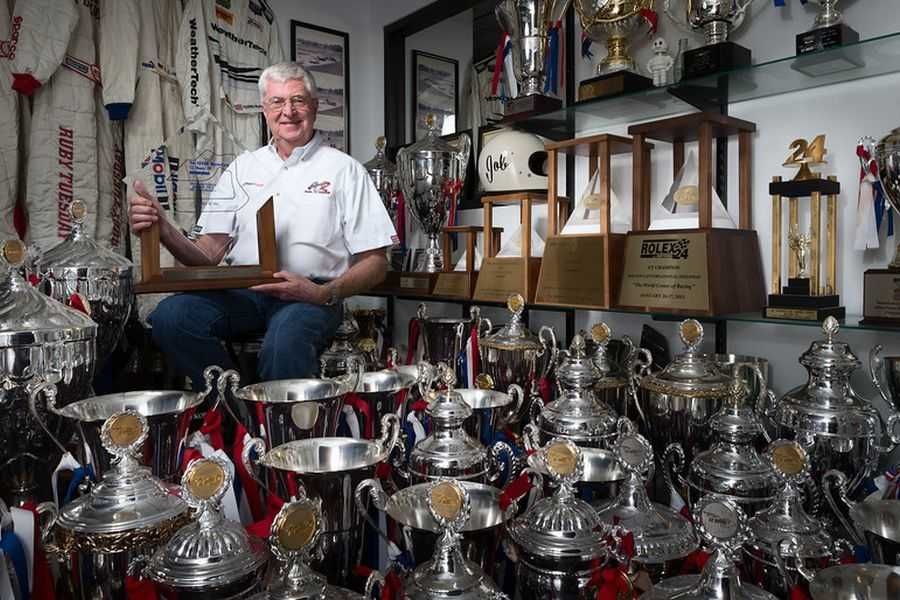 Alex Job and his trophies

The story of the team, located in Tavares, Florida, began more than 40 years ago. Team owner Alex Job spent 20 years in the retail automobile business, primarily with Porsche. For him, racing has always been a motivating factor.

In the 1970s, he raced part-time while keeping his day job, including participations at Daytona 24h and Sebring 12h in 1976, driving the Porsche 914/6 for Spirit Racing. Job retired from racing in the late ’70s, but it was just a temporary retirement. 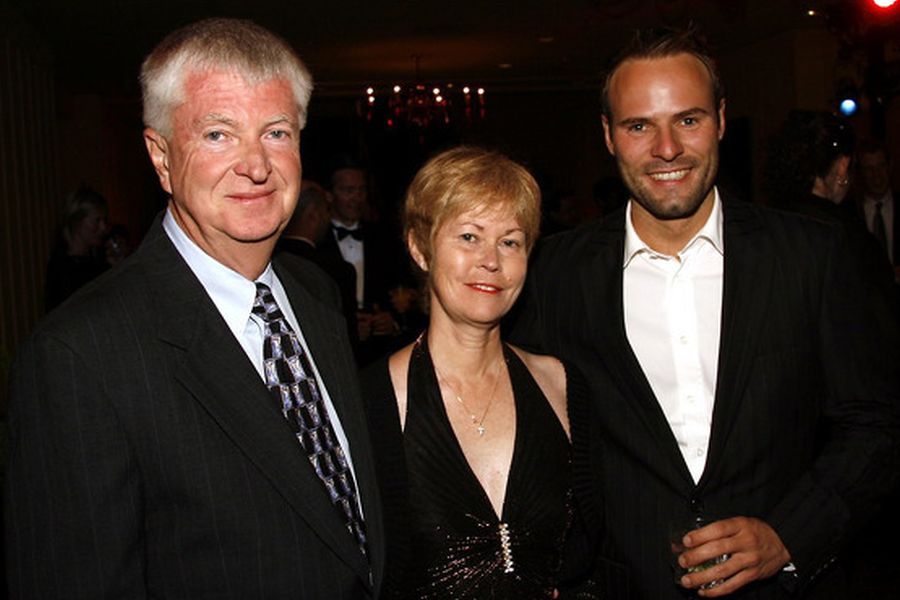 Alex and Holly Job pictured in 2006

Alex and Holly Job founded a team in 1988

Alex and his wife Holly Job founded Alex Job Racing in 1988, with the goal of building a team that would be capable of winning championship titles. The team was initially run out of the two-car garage at Alex and Holly’s house. At the time, customer cars were not available from Porsche, so Alex built his own racing Porsche 911s.

Class podiums for Alex at Daytona and Sebring

In 1989, he participated at Daytona 24h and Sebring 12h for the first time with his own #62 Porsche 911, sharing a car with Chris Kraft, Rusty Bond and Terry Wolters. In 1990, the team began racing full time and Alex Job Racing moved to their first commercial warehouse shop in 1991. Alex’s greatest results as a driver were second place in GTU class at 1990 Daytona 24h and second place in GTU class at 1991 Sebring 12h.

Driving retirement for Alex in 1992

In 1992, Alex decided to retire from driving duties recognizing that it would be more effective if he focused on a role of team manager and engine builder.

Job’s second retirement from driving began to pay off in 1995 when AJR began to collect notable wins, including a GTS-2 class victory at Sebring 12 Hours with Charlie Slater, Joe Cogbill and Bill Auberlen in the Porsche 911 or the New Orleans IMSA finale victory for Bill Auberlen.

In 1996, Alex Job Racing was involved in the Team Seattle program, an association between AJR and a group of Seattle businessmen, with an intention to help raise money for the Children’s Hospital of Seattle. Money was pledged based on the performance of the cars in the race.

The first year only had one car involved. The program was continued in 1998 and 1999. The total amount raised during the program was approximately a half a million dollars.

The season 1998 was a milestone year for Alex Job Racing. While scoring victories all over America, with Darryl Havens and Cort Wagner as AJR’s drivers, Alex Job made a connection with Porsche Motorsports North America. PMNA started to build all of the engines for AJR.

The season 1998 was also the first year with the proper funding for a two car team, in the form of sponsorship from Aerofab Aluminum and Darryl Havens. Alex Job, himself, would win the Professional Sports Car Racing Mechanic of the Year award. 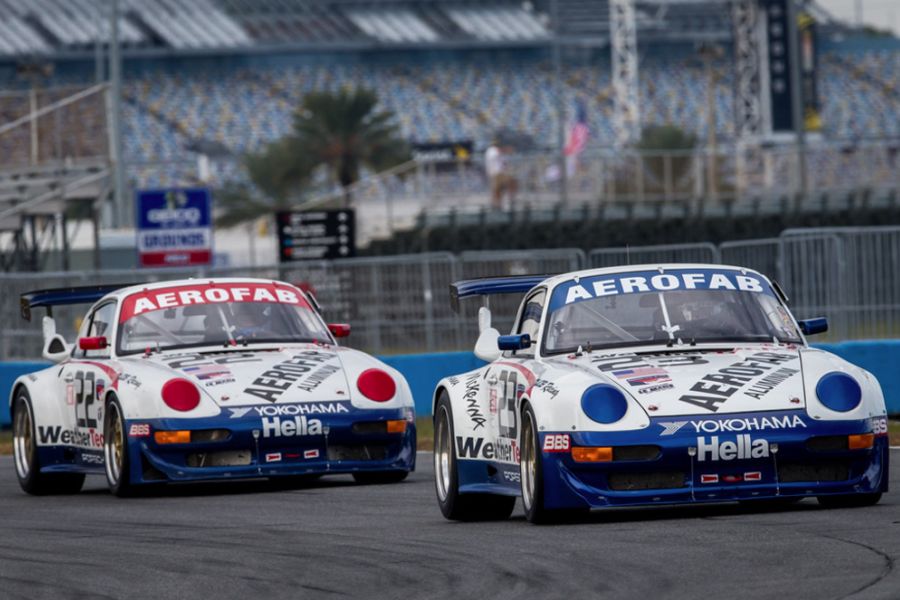 Another milestone year was 1999 when Alex Job Racing entered the inaugural season of the American Le Mans Series. In the following 14 years, AJR became one of the most successful ALMS teams.

Before starting ALMS campaign, AJR scored GT3 class win at the Daytona 24 hours with #23 Porsche 911 Carrera. Drivers were Kelly Collins, Cort Wagner, Anthony Lazzaro and Darryl Havens.  After that, a class victory at Sebring 12 hours followed, with Collins, Wagner and Havens in a car. One more great win, at Petit Le Mans, followed later in a season.

Second place for three years in a row

AJR was the first US team to receive the new 911 GT3-R. With Cort Wagner and Dirk Muller driving, they won three races with that car (Portland, Petit Le Mans and Las Vegas). Cort Wagner won the ALMS GT Class Drivers Championship, as well as the Porsche Cup. AJR finished second in the teams’ championship.

In 2001, AJR received Porsche factory support and finished in the second place for the third year in a row. This time, BMW Motorsport beat them. AJR drivers Lucas Luhr and Sascha Maassen finished third and fourth in the Drivers’ Championship. 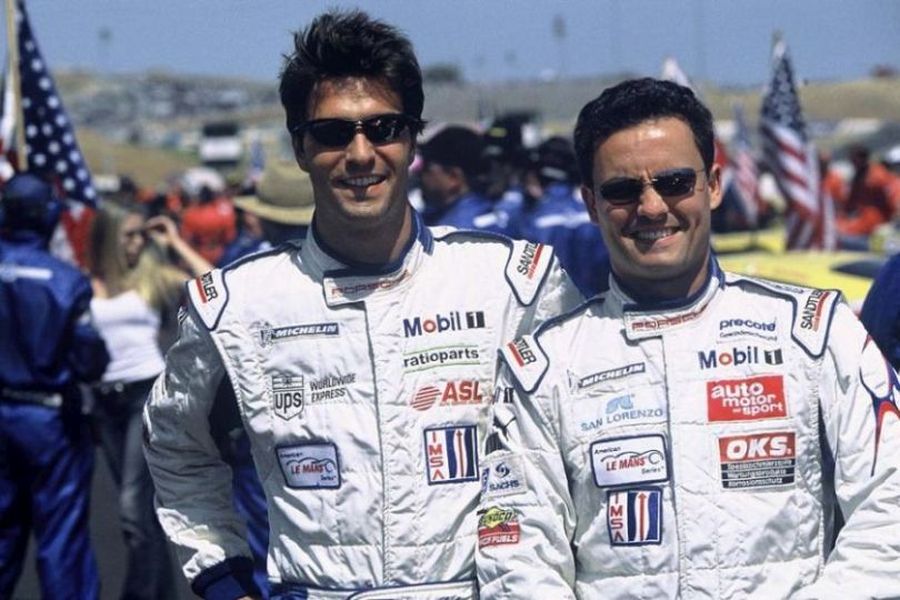 Repeated success in the 2003 ALMS season

Third championship title in a row

In 2004, the driver line-up was refreshed with Romain Dumas and Marc Lieb in the #24 car. Timo Bernhard and Jorg Bergmeister were sharing the #23 Porsche. With seven wins in nine races, Alex Job Racing took the third consecutive ALMS championship title in GT class. Timo Bernhard was a sole champion in drivers’ standings. 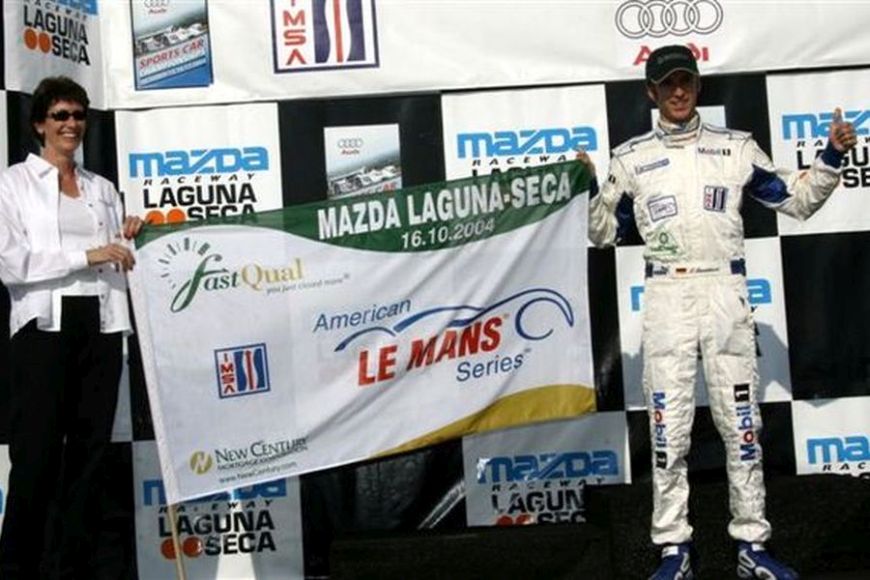 Championship-winning streak came to an end in 2005

The championship-winning streak came to an end in 2005, when AJR was running only one factory-supported car for Timo Bernhard and Romain Dumas. The second car was driven by Ian Baas and Darren Law. With four wins, AJR finished second in GT Teams’ Championship, behind Peterson/White Lightning team, which was also using a Porsche 911 GT3 RSR. 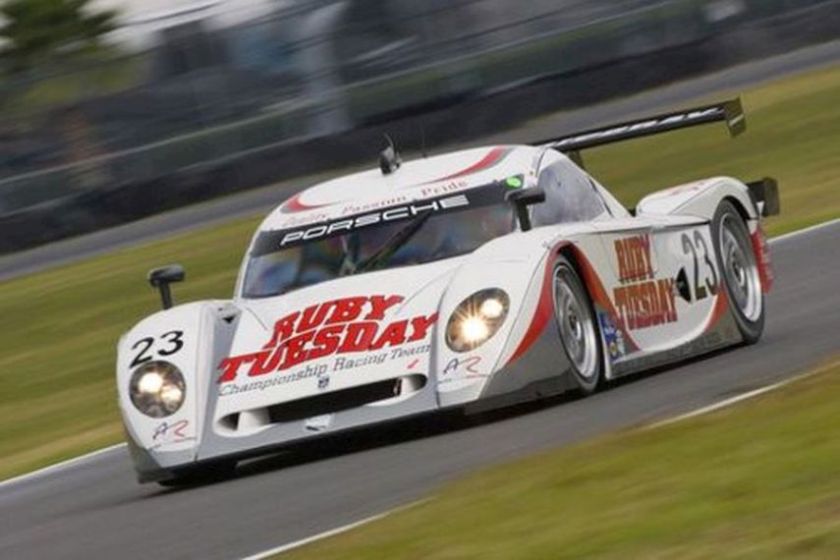 In 2007, the team was competing only in the Grand-Am Series, again fielding Crawford-Porsche. Drivers were Patrick Long and Jorg Bergmeister, who scored one victory during a season, at Laguna Seca. Patrick Long finished seventh in the final standings. The season 2008 was the first year after a long time without wins. Bill Auberlen and Joey Hand scored only two podium finishes, ending a year in the 13th place. 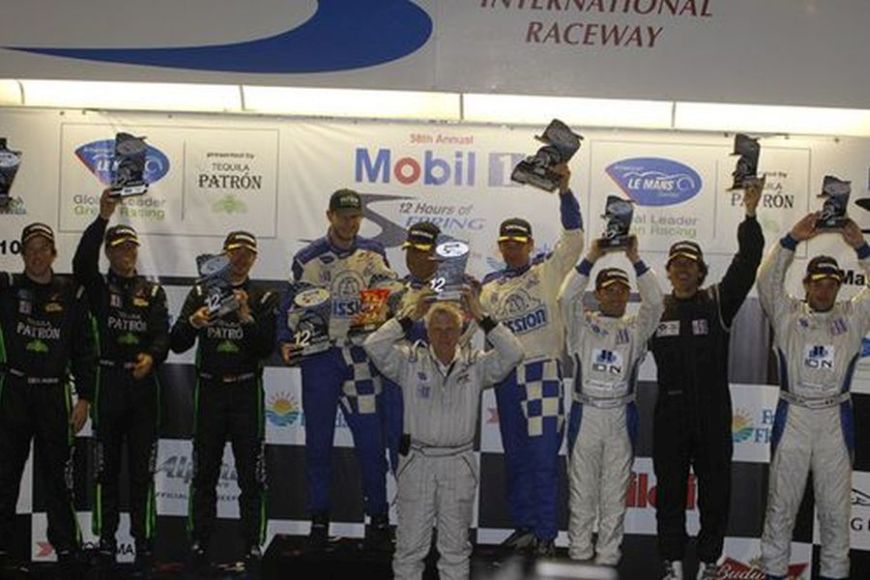 After skipping major competitions in 2009, participating in the Patron IMSA GT3 Challenge, Alex Job Racing returned to the American Le Mans Series in 2010. The team continued to run Porsche cars as a customer team in the newly formed GTC class.

Butch Leitzinger, Juan Gonzalez and Leh Keen opened a season with a class victory at Sebring 12 hours. Leitzinger and Gonzalez repeated a win in the second round at Long Beach. The team finished in the second place in the GTC Teams’ Championship with full-season drivers Bill Sweedler and Romeo Kapudija fifth and sixth in the Drivers’ Championship.

In 2011 ALMS season, the team scored no wins in GTC class, finishing third among teams. Bill Sweedler was fourth the Drivers’ Championship. 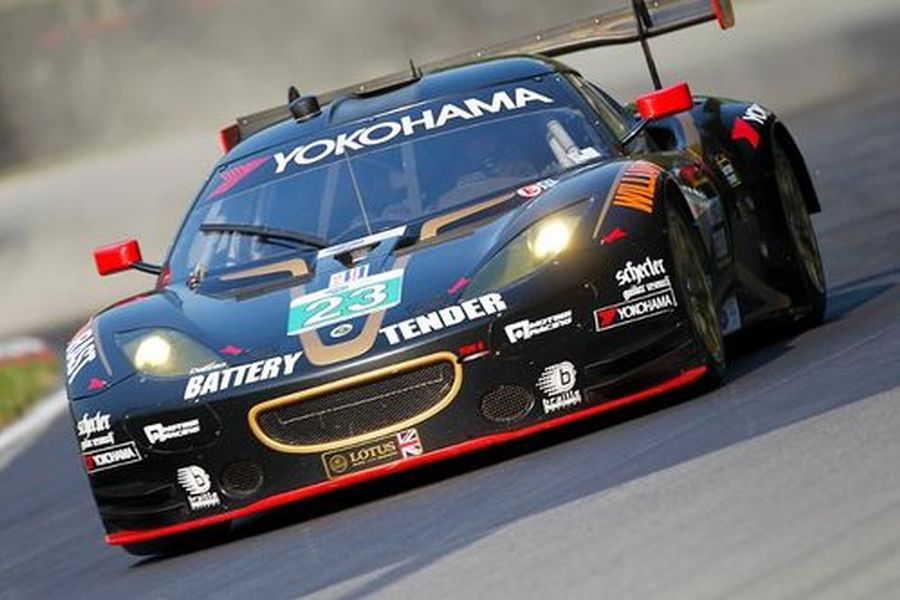 In 2012, AJR was runnng Lotus Evora GTE in the ALMS

Claiming four GTC class victories, including 1-2 at Sebring, Alex Job Racing earned its fourth teams’ championship title, eight years after the previous triumph. In the GT class, results were disappointing. Without factory support, an experiment with Lotus wasn’t successful, the team was 7th in the points, with drivers in the 17th place. 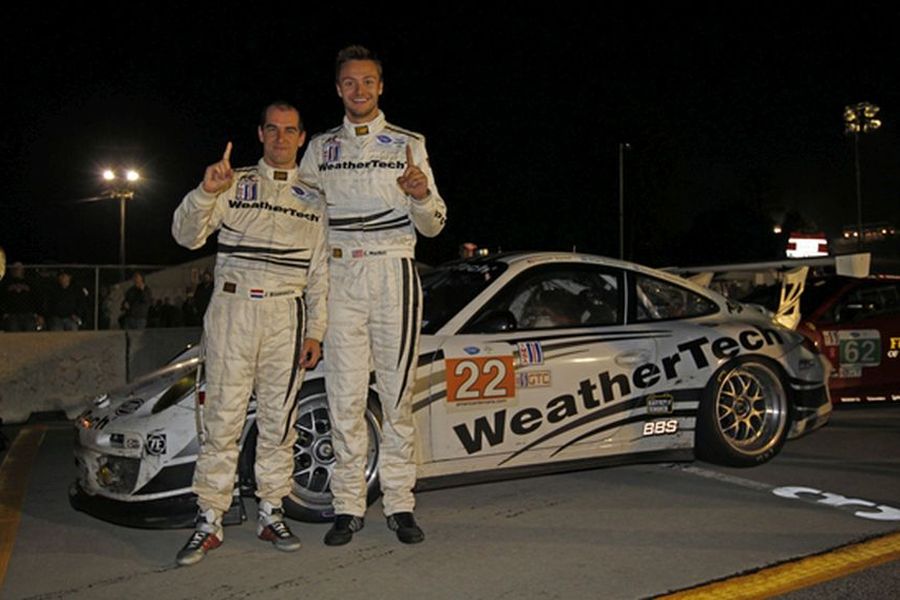 Jeroen Bleekemolen and Cooper MacNeil in 2013

For the 2013 ALMS season, the last one before merging with Rolex Sports Car Series, Alex Job Racing replaced Lotus with Ferrari 458 GT2 in the GT class, running a team together with West Racing. Results weren’t better, the team finished 8th in the points.

In the 2014 IMSA United SportsCar Championship, Alex Job Racing fielded two Porsche 911 GT America cars in the new GTD (GT Daytona) class. Leh Keen and Cooper MacNeil were driving the #22 WeatherTech Porsche while Mario Farnbacher and Ian James were the full-time drivers in the #23 Heart of Racing Team Seattle Porsche. For both cars, the second place was the best result. The #22 crew finished third in GTD standings. 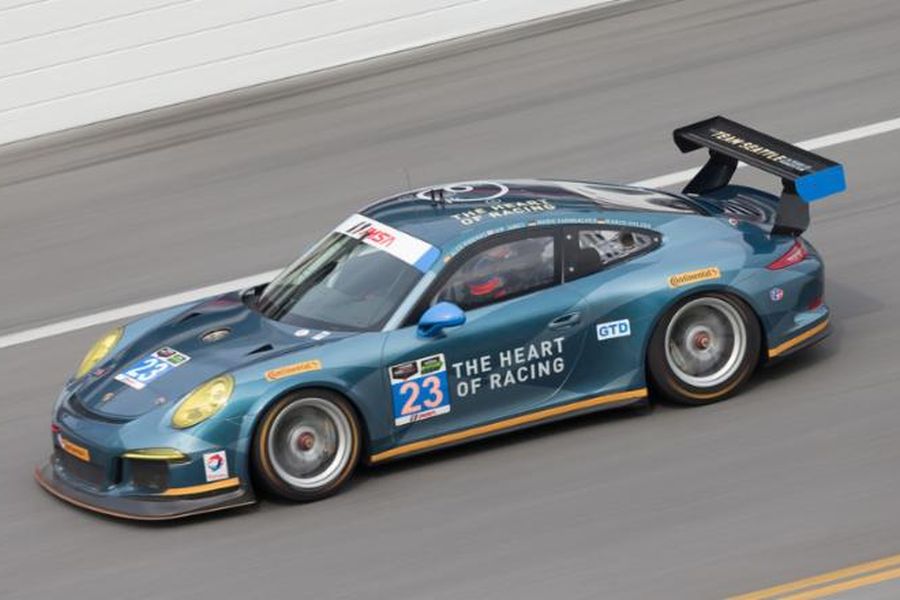 Alex Job Racing entered the 2015 IMSA season with unchanged driver line-up. This time, results were better. The first win came at Sebring, where the #23 was a winning GTD car, driven by Mario Farnbacher, Ian James and Alex Riberas. The #23 crew scored one more win (Belle Isle) to finish fourth in the final GTD standings.

Single victory for AJR in 2016 season

In 2016, Alex Riberas became a full-time driver in the #23 car alongside Mario Farnbacher, with Ian James in the endurance races only. Cooper MacNeil and Leh Keen stayed in the #22 Porsche. The #23 scored only one win, at Laguna Seca, finishing fifth in the points. The #22 car was without wins for the third year in a row. 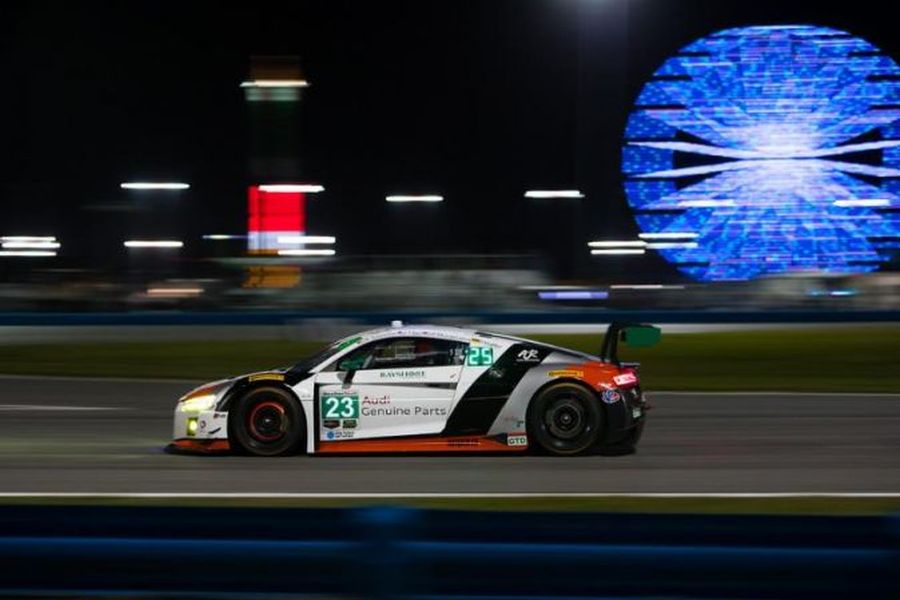 The major changes happened in 2017 IMSA SportsCar Championship season. Alex Job Racing completely changed its driver and switched to another German manufacturer – Audi. The team is running only one car, the #23 Audi R8 LMS, with Townsend Bell, Bill Sweedler and Frank Montecalvo in it. At 2017 Rolex at Daytona, Pierre Kaffer joined them as the fourth driver. They finished sixth in GTD class.

Alex Job Racing is not a racing team only. Alex Job’s company has been also involved in vintage/historic cars restoration. They specialize in Porsches, but not exclusively, and it deals with everything from ground up restorations to anything in between.