Hideo Fukuyama is a Japanese former racing driver who was active from the 1970s to 2007. His greatest achievement in a career is a GT class victory at 24 Hours of Le Mans in 2000 when he was driving a Porsche for Team Taisan. On his home soil, Fukuyama was two-time GT300 Super GT champion (1997, 2000) and one-time Japanese Touring Car champion.

Fukuyama also earned a special place in a motorsport history as the first ever Japanese driver to compete in the premier division of the American NASCAR stock car championship with four starts in 2002 and 2003.

Racing in Japanese Formula 3 until 1987

Born in Suzuka City on August 13, 1955, Fukuyama started a career during the 1970s in Japanese single-seater competitions. His first success was a title of the 1979 Formula Libre 500 champion. In 1981, he progressed to the Japanese Formula 3, staying in that championship until 1987.

In 1988, Fukuyama expanded his program with British Barn Racing Team to full season in the Japanese championship but also participated in the World Sports Prototype Championship. His full-time co-driver in the JTK 63C-Ford prototype was Jiro Yoneyama.

In June 1988, Fukuyama and Yoneyama debuted at 24 Hours of Le Mans, driving the #115 ADA 03-Ford prototype for British ADA Engineering. Their teammate was Ian Harrower. They finished 18th overall and second in the C2 class.

Two seasons with BMW in the touring car championship

Parallel to his prototype racing commitments, Fukuyama also participated in the Japanese Touring Car Championship, driving a BMW M3 for Hitotsuyama Racing. In July 1990, Fukuyama participated in the 24 Hours of Spa. He was driving a Nissan Skyline GT-R for Team Zexel, finishing in the 12th place. In 1991, he scored one victory with BMW M3 to finish 13th in the JTCC standings.

For the 1992 Japanese Touring Car Championship season, Fukuyama joined Hasemi Motorsport to drive the #1 Nissan Skyline GT-R together with team owner Masahiro Hasemi. With two wins in eight races, at TI Circuit Aida and Mine Central Circuit, they won the championship title.

Besides racing in the JTCC, Fukuyama occasionally participated in other championships, such were World Sportscar Championship (Suzuka 1000), Formula 3 or Formula 3000.

In 1993, Fukuyama and Hasemi continued to drive #1 Nissan GT-R in the Japanese Touring Car Championship. They were the race winners one time, at Suzuka Circuit.

On the other side, Fukuyama debuted with Nissan in the inaugural season of the All-Japan Grand Touring Car Championship (today Super GT). He was driving Nissan Skyline GT-R for Beldear Corporation at Suzuka 1000 km and Nissan Silvia for Nismo at season's finale at Fuji Speedway.

In the following years, Fukuyama occasionally participated in the GT championship with different teams and cars – Blitz Racing (Toyota Supra), Team Nakaharu (Nissan Skyline GT-R) or Makiguchi Engineering (BMW M3). In the 1995 Suzuka 1000 km, he joined Gulf Racing to drive a McLaren F1 GTR. He also returned to the JTCC to drive a Toyota Corolla for Dandelion Racing.

The highlight of the season was Fukuyama's return to Le Mans. He was a part of Nismo's two-car attack in the GT1 class, driving the #22 Nissan Skyline GT-R LM together with Masahiko Kondo and Shunji Kasuya. They finished 10th overall and 5th in the GT1 class.

In 1996, Fukuyama finished sixth in the GT500 class of the All-Japan GT Championship, driving a Nissan Skyline GT-R for Nismo Team Zexel. His teammate was Aguri Suzuki. In 1997, Fukuyama switched to GT300 class to drive the #19 Nissan Silvia for RS-R Racing Team with Bandoh. He and Manabu Orido won two races and won the championship title with just one-point gap ahead closest rivals.

Fukuyama was driving Nissan Silvia for Team Daishin in 1998 and 1999, not scoring wins. His teammate was Nobuyuki Ooyagi. For the 2000 GT season, Fukuyama joined Advan Team Taisan to drive the #26 Porsche 996 GT3 R along to Hideshi Matsuda. Fukuyama was the race winner three times and he took his second GT300 title. 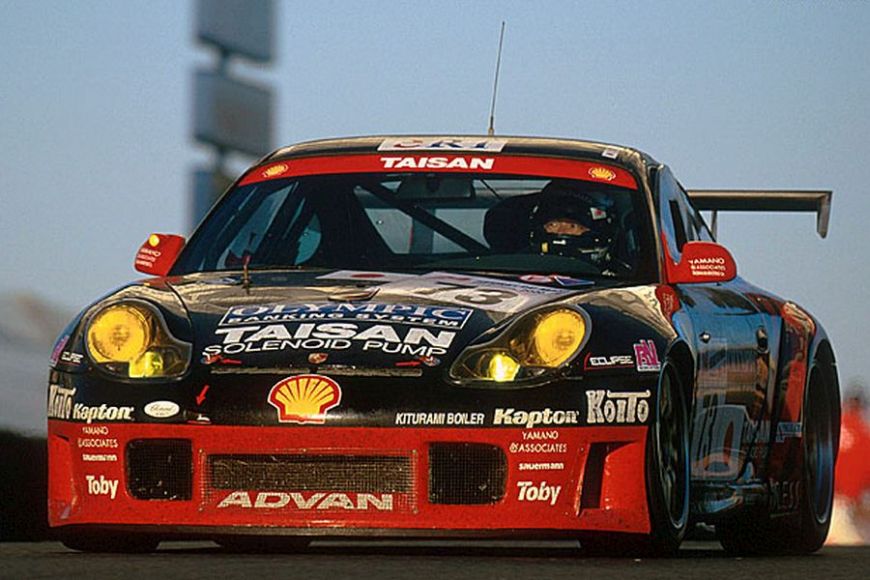 In June 2000, Fukuyama returned to Le Mans for the third time. He was sharing the #73 Advan Team Taisan Porsche 996 GT3-R with Atsushi Yogo and Bruno Lambert. After 310 laps of racing, they finished 16th overall and the winners of the GT class, six laps ahead of nearest rivals.

Fukuyama spent two more seasons with Team Taisan, finishing 6th in the points in 2001 and fourth in the final standings in 2002. At 2001 Le Mans, he was sharing a Porsche with Atsushi Yogo and Kazuyuki Nishizawa, finishing 5th in the GT class.

During the late 1990s, Fukuyama experienced stock racing in NASCAR's exhibition events in Japan. He participated in three NASCAR Thunder Special events, two times at Suzuka (1996, 1997) and one time at Twin Ring Motegi (1998).

Fukuyama was out of stock car racing for few years and then, in September 2002, he made a history becoming the first ever Japanese driver to qualify for the race in the NASCAR's premier division, the Winston Cup Series. Fukuyama made a debut at Dover International Speedway's All-American Heroes 400, driving the #66 Ford for Haas-Carter Motorsports. Transmission failure stopped him after 243 laps and he was classified 39th. Fukuyama started again at Martinsville Speedway in October, crashing out after 400 laps. He failed to qualify for the race at North Carolina Motor Speedway.

In 2004, Fukuyama returned to native Japan and joined Team Gaikokuya to drive a Porsche in the GT300 class of the Japanese GT Championship. For the 2005 season, he joined A&S Racing to drive a Chevrolet Corvette C6, but without notable results.

Fukuyama skipped racing in 2006 and then returned to participate in just one Super GT race in 2007, driving a Ford GT for DHG Racing at Suzuka 1000 km. During 2007, he was driving Porsche 997 GT3 RSR for Hitotsuyama Racing in four rounds of the Japan Le Mans Challenge, ending a career with GT2 class victory in season's finale at Okayama International Circuit.