Sonoma Raceway (formerly known as Sears Point Raceway and Infineon Raceway) is a road racing course and drag race facility located on the Sears Point in the southern Sonoma Mountains in Sonoma, California.

The track was opened in 1968, it has been hosting NASCAR races since 1989 and currently is one of the two remaining road courses in the NASCAR Cup Series schedule. From 2005 to 2018, Sonoma has been hosting the IndyCar races. Between 2015 and 2018, the Grand Prix of Sonoma served as IndyCar season’s finale. 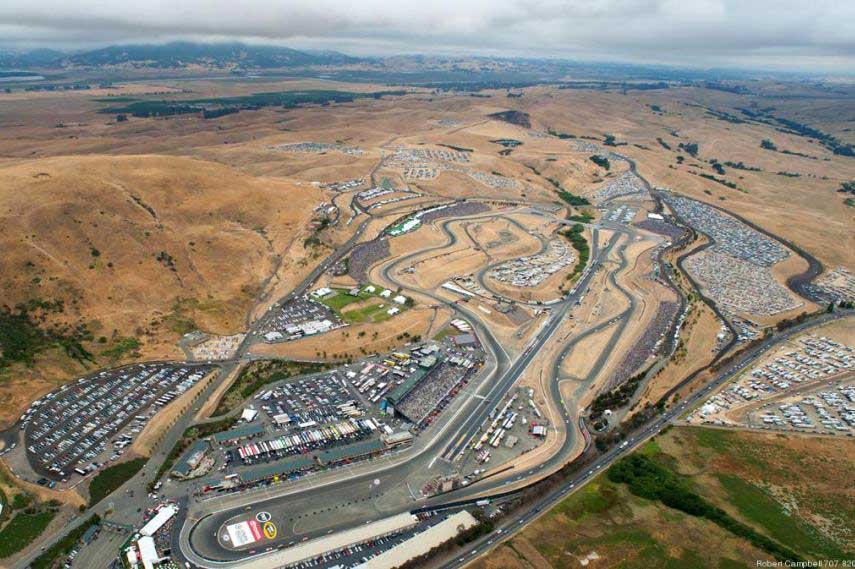 Sears Point Raceway was opened in 1968

The First race at Sears Point in December 1968

The 2.52-mile (4.06 km) road racing course was constructed in 1968 by Marin County owners Robert Marshall Jr., an attorney from Point Reyes, and a land developer Jim Coleman of Kentfield. The ground was broken in August 1968 and paving of the surface was completed in November. The track was named Sears Point Raceway and the first official event was the SCCA Enduro, held on December 1, 1968.

During its first few years, Sears Point hosted Formula 5000 and Trans-Am races, but the biggest event was the 150-mile USAC Indy Car race on July 4th, 1970. Dan Gurney won the race against some of the most popular American racers, such as Mario Andretti, Mark Donohue, and Al Unser. 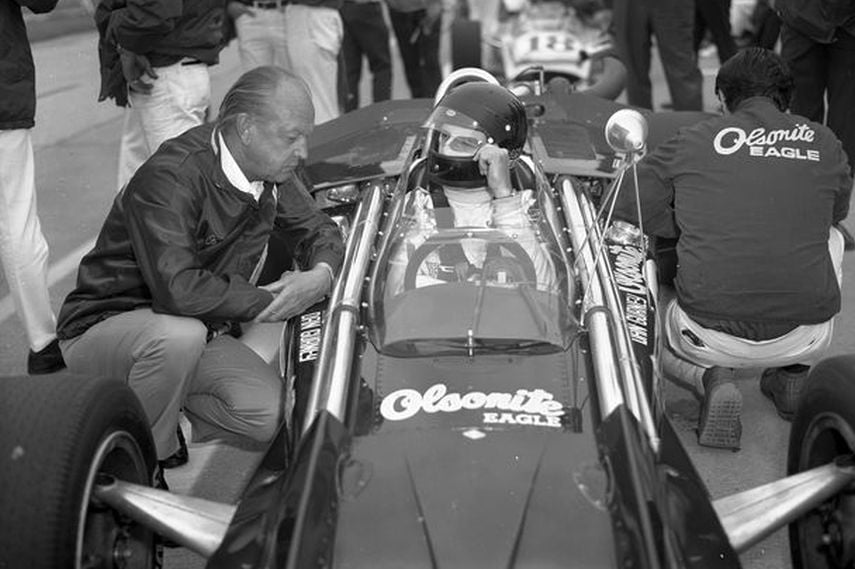 Racing circuit as a business

The raceway changed a lot of owners since its opening. The first business transaction was made in 1969 when the track was sold to Filmways Corp., a Los Angeles-based entertainment company. The following year, the track was closed and became a tax shelter for Filmways after financial losses were reported. During the 1970s, a few privateers leased the track and finally, Black Mountain Inc. purchased the track from Filmways.

In 1981, Filmways regained ownership of the track after a financial dispute with the Black Mountain group. Jack Williams, Rick Betts, and John Andersen had purchased the track from Filmways at an auction and had started the reconstruction in 1985. The track was completely repaved, in part with funds donated from the “Pave the Point” fund raising campaign. The first shop spaces (buildings A, B, C, and D in the main paddock area) were built. 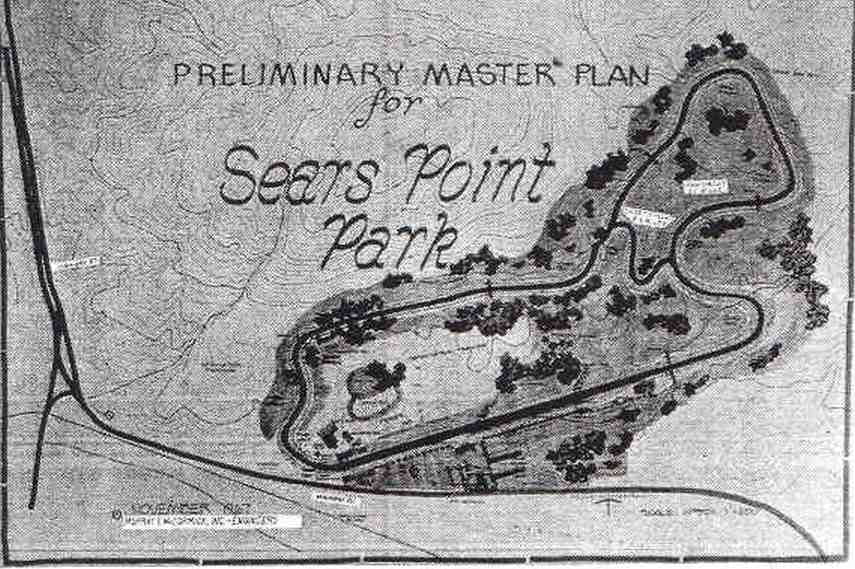 A map of the original Sears Point racing circuit

In 1986, Harvey “Skip” Berg took control of the track and became a major stockholder in Brenda Raceway Corp., which controlled the track until 1996. Additional buildings were constructed during 1987. In 1988, Sears Point hosted the first NHRA drag race and in 1989, NASCAR came to the track for the first time.

In 1994, more than $1 million was spent on a beautification project and the construction of a 62-foot-high four-sided electronic lap leader board in the center of the road course. In the following years, a major $3 million renovation plan included VIP suites and a two-story driver’s lounge as well as the emergency medical facility.

In 1996, the owner Skip Berg sold the track to O. Bruton Smith, the chairman of Speedway Motorsports. Major renovations began at the Sears Point Raceway in 1998 with the creation of “The Chute”, an 890-foot (270 m) high-speed stretch. The Sonoma County Board of Supervisors approved a $35 million Modernization Plan that included 64,000 Hillside Terrace seats, repaving of both the road course and drag strip, and increased run-off around the entire track.

In 2002, Infineon Technologies bought the naming rights, renaming the course to Infineon Raceway. After the agreement with Infineon had expired, the track was renamed to Sonoma Raceway. 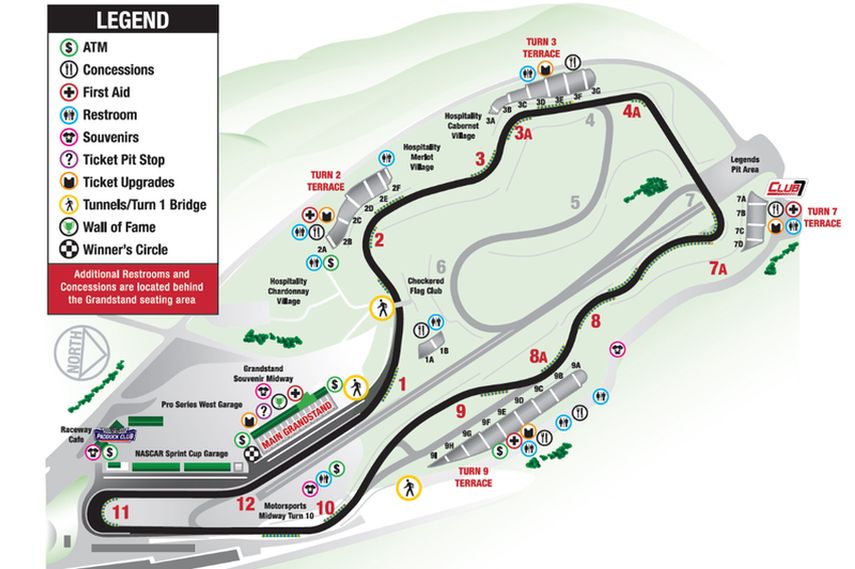 The standard, full-length road course at Sonoma Raceway is a 2.52 miles (4.06 km) 12-turn course with 160 feet (49m) of elevation change. Most races, including the Grand Prix of Sonoma, use the full course. The raceway also has a 440-yard (402.3 m) dragstrip used for NHRA drag racing events. 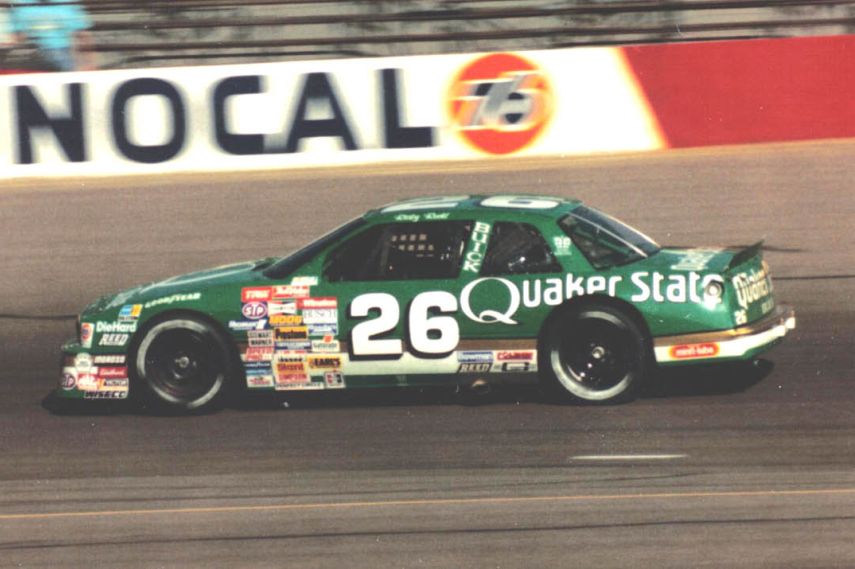 Ricky Rudd was the first NASCAR winner at Sears Points

The major races at Sonoma Raceway are the IndyCar Series’ Grand Prix of Sonoma (by its name) and NASCAR Sprint Cup Series’ Save Mart 350 (by its longevity). The first ever NASCAR race was held at Sears Point in 1989, and Ricky Rudd took the inaugural victory, driving the King Racing’s Buick. From 1989 to 1997, NASCAR races were held at the full course. Since 1998, the 1.95-mile modified course, with the addition of the Chute, was used. One more modification was made in 2001 and since then, NASCAR has been using the 1.99 miles long layout.

Jeff Gordon is the record holder with five wins 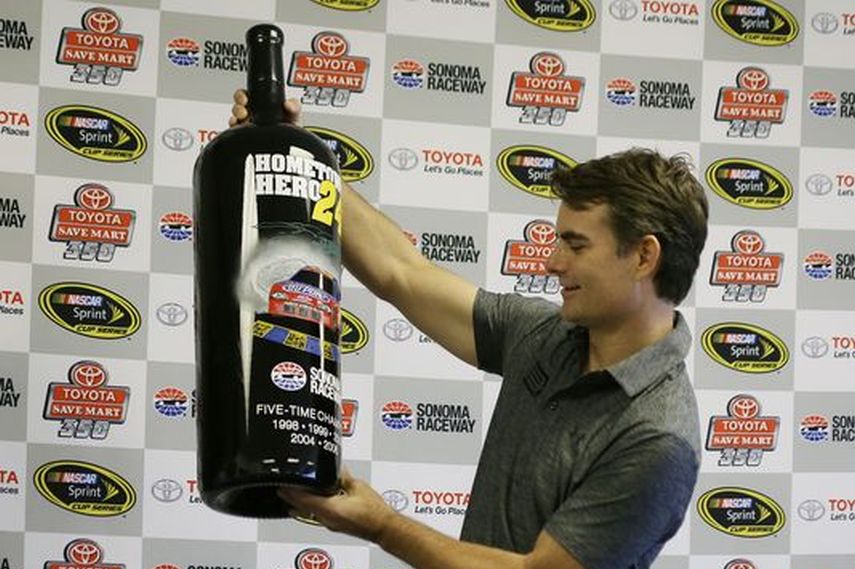 Jeff Gordon is the most successful NASCAR driver at Sonoma Raceway

The pit road was too small

It’s interesting that from 1989 to 2001, the pit road at the Sonoma Raceway could only accommodate 34 pit stalls. In the early years, some teams were required to share the pits, but after a few years, a makeshift auxiliary pit road was constructed inside the hairpin (turn 11). It was nicknamed Gilligan’s Island because it was landlocked by the racing course and nobody could leave ‘the island’ until the race was over. In 2002, the main pit road was expanded to 43 cars and the Gilligan’s Island was abandoned.

One more interesting phenomenon connected with Sonoma Raceway, as one of the two road racing courses in the Sprint Cup, was the appearance of the so-called ‘road course ringers’. It’s the team that participated in NASCAR events only at the road course races.

In 1995, Sonoma Raceway was a part of the inaugural season of the NASCAR Truck Series which stopped appearing at Sonoma in 1999. The winner of the 1995 race was Ron Hornaday Jr. In the following three seasons, the winners were Dave Rezendes, Joe Ruttman, and Boris Said. One more NASCAR series appeared at Sonoma: it was the NASCAR West Series, with the combination race from 1989 to 2007 and the standalone race between 2006 and 2009. 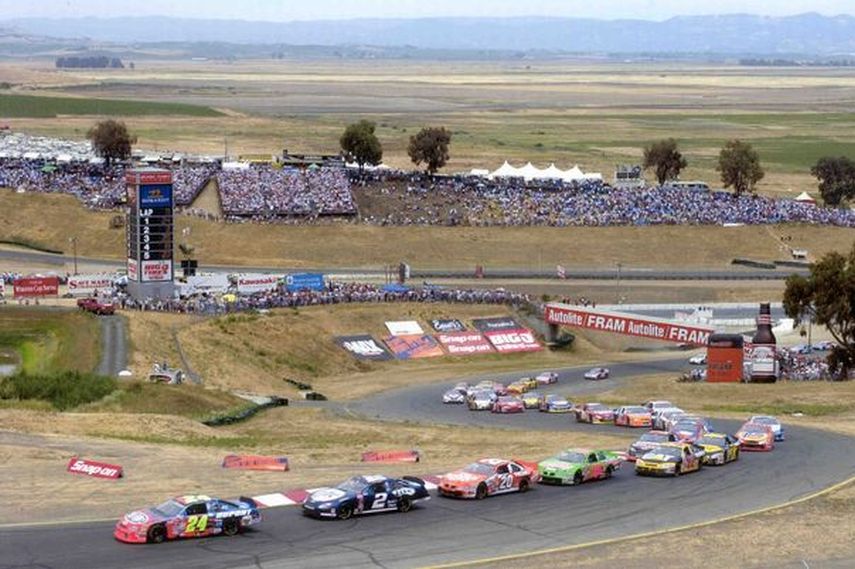 IndyCar Series returned to Sonoma Raceway in 2005, 35 years after the first USAC open-wheelers raced there. Tony Kanaan claimed the inaugural victory, driving Andretti’s Honda, and did push-ups in the Wine Country Winner’s Circle.

In 2006, the rookie Marco Andretti became the youngest ever winner of an IndyCar race. He was 19 years, 5 months and 14 days old. It’s interesting that in 2005, Marco won an Indy Lights race at Sonoma.

For the 2019 IndyCar Series season, Sonoma dropped out from a calendar. 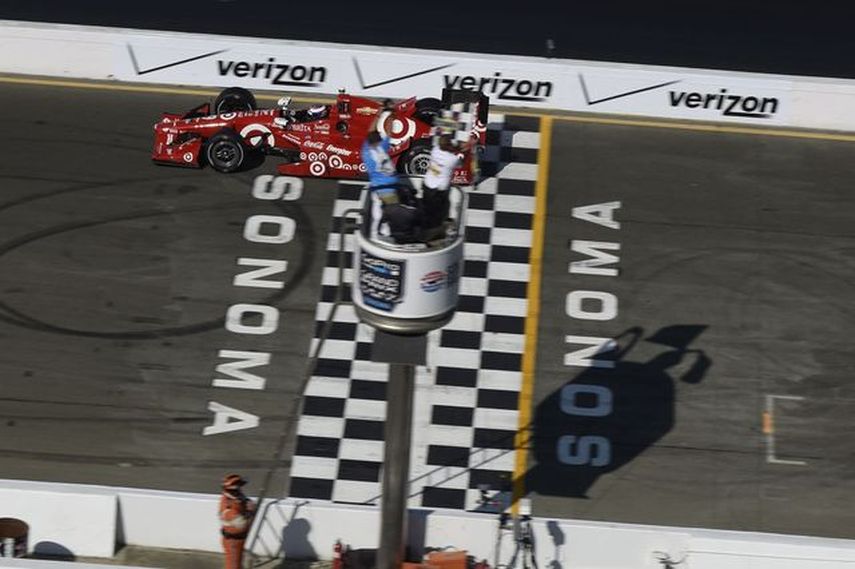 Grand Prix of Sonoma was a decisive race of the 2015 IndyCar season. Scott Dixon won and took the title

As we mentioned, Sonoma hosted various American series in the pastsome of the most important were Can-Am (until 1984), Trans Am (until 2001), IMSA GT Championship, American Le Mans Series, and Grand-Am Rolex Sports Car Championship. 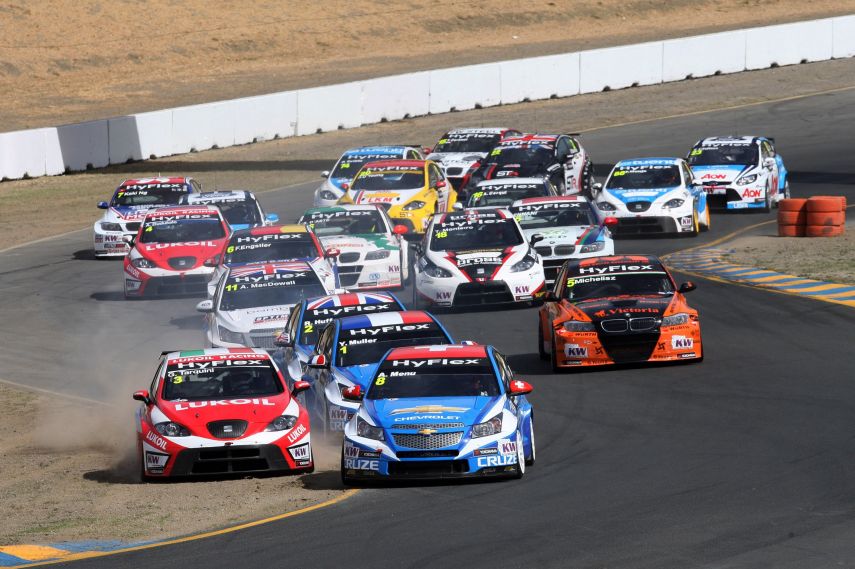 Touring cars came to Sonoma in 2012. FIA World Touring Car Championship had an American round for the first time. The winners of two races were Chevrolet drivers Rob Huff and Yvan Muller. The next year, WTCC reappeared at Sonoma. Honda’s Gabriele Tarquini and Chevrolet’s Tom Chilton took the victories. The race was originally included in the schedule for the 2014 WTCC season but was dropped from the calendar due to logistical issues, to be replaced by an additional round in China.

The track is always full

Video : A lap around Sonoma Raceway with Anthony Lazzaro