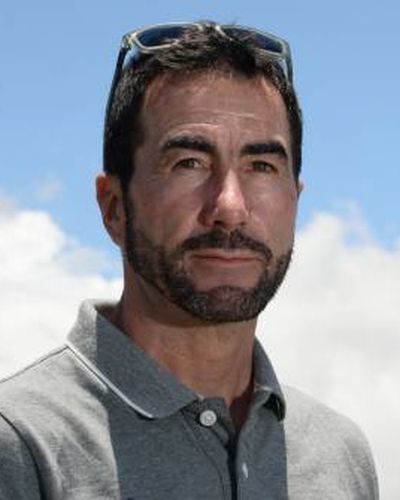 The Frenchman Luc Alphand is definitely one of the most interesting personalities among race car drivers. Before switching into the cockpit of a race car in 1997, Alphand was the best alpine skier in the world. In 1997, he was the overall winner of the FIS Alpine World Cup. In his racing career, Alphand recorded eleven Dakar Rally participations and nine participations at 24 hours of Le Mans. At Dakar, he was the overall winner in 2006, driving for Mitsubishi. At Le Mans, his best result was a podium in GT1 class in 2006.

Luc Alphand was born on August 6, 1965, in Briançon, Hautes-Alpes, France. He started his skiing career as a teenager, becoming the junior world downhill champion in 1983. A year later, he made his FIA World Cup debut. He specialized in the speed disciplines, taking six French championships in Downhill and Super G between 1985 and 1994.

His first international success came in 1995 when he was World Cup winner in Downhill. He repeated that in 1996, adding bronze medal from the World Championship in Sierra Nevada, Spain. In 1997, Alphand was the best skier in two disciplines (Downhill and Super G), taking the overall title in the FIS World Cup. With that trophy in his pocket, he decided to retire from skiing and began his motorsport career.

Luc Alphand as Dakar rookie in 1998

One of Alphand's Dakar vehicles was Renault Kangoo

Jean-Louis Schlesser was the winner of 1999 Granada – Dakar Rally and Alphand joined Schlesser's team for 2000. Alphand was driving the Renault Kangoo but he retired early.

Except driving in the desert, Alphand expanded his racing career to GT races, participating full season in the 2000 French GT Championship. He was driving the Porsche 996 GT3 R for Scorp Motorsport, scoring eight wins and finishing third in the points. His co-driver was Luis Marques.

One more retirement with Schlesser's car followed at 2001 Paris – Dakar Rally, so Alphand decided to rejoin Mitsubishi in 2002 event. The season 2001 was marked by his debut at Le Mans 24 hour race.

He formed his own team Luc Alphand Aventures to run the Porsche 996 GT3 RS at the famous endurance race, together with Luis Marques and Michel Ligonnet. They finished 17th overall and 8th in GT class.

At 2002 Dakar Rally, Luc Alphand was driving the Mitsubishi Pajero, scoring his best result so far. He finished in the 7th place. In the same year, he again participated in the French GT Championship, driving the Porsche 996 GT3 RS for his team and finishing 21st in the points. At 2002 Le Mans 24h, he finished 5th in GT class, sharing the car with Christian Lavieille and Olivier Thevenin.

For 2003 Dakar Rally, which started in Marseille and finished in Sharm El Sheikh, Alphand switched to X-Raid's diesel-powered BMW X5 and scored his first special stage victory in the 14th stage. At the end, he finished ninth in the final standings. For 2003 Le Mans 24h, Alphand's team switched to Ferrari 550 Maranello, finishing fifth in GTS class. Alphand's co-drivers were Jerome Policand and Frederic Dor.

In 2004, Alphand was among front-runners at Dakar Rally, being fastest in two stages and finishing fourth in the overall standings, again driving X-Raid's BMW X5. His navigator was Henry Magne. At 2004 Le Mans 24h, Alphand's team was again running with Porsche, scoring a fifth place in GT class.

Victory at 2006 Dakar Rally with Mitsubishi

And then the most successful year in his racing career came. Luc Alphand and Gilles Picard were in the #302 Mitsubishi Pajero. The main rival Stephane Peterhansel lost a lead after hitting a tree on the 12th stage. Alphand took the lead and remained in front until the end, taking his first Dakar Rally victory with a 17.53-minute advantage over Volkswagen's Giniel de Villiers.

For 2006 GT racing season, Luc Alphand Aventures switched to Chevrolet Corvette C5-R, participating in three races of the Le Mans Series. The highlight of the season was the 24 hours of Le Mans.

Two Dakar podiums and one victory with Mitsubishi

The 2008 Dakar Rally was canceled and replaced with Central Europe Rally, where Alphand/Picard finished fourth in the Mitsubishi Pajero Evolution. That year was successful for Alphand in the Le Mans Series, with two wins and a third-place finish at the end of the season. At Le Mans 24h, the #72 Corvette didn't reach the finish.

The 2009 Dakar Rally, first ever in South America, was the last event for Alphand. It was also the last event for Mitsubishi. The manufacturer switched to diesel-powered cars for the event but three drivers (Alphand, Masuoka, Peterhansel) retired. Alphand also retired in his last Le Mans participation, sharing the #72 Corvette C6.R with Patrice Goueslard and Stephane Gregoire.

It was the last ever race for Alphand, as he suffered severe back injuries in an accident on the Rand'Auvergne off-road motorcycle race on June 27. He recovered from injuries but never returned to racing.