Robby Unser is an American former racing driver and a member of the famous Unser racing dynasty. His greatest achievement in a career is a record of nine wins at Pikes Peak International  Hillclimb which makes him one of the most successful drivers in a history of the race.

Like his father Bobby, uncle Al Unser and cousin Al Unser Jr., Robby also tried to compete in the North American open-wheel championships, spending two seasons in the Indy Lights Series and three seasons in the Indy Racing League but without any notable success. He participated two times at Indianapolis 500, finishing fifth in 1998.

A son of three-time Indianapolis 500 winner

Robby Unser was born in January 1968 in Albuquerque, New Mexico, as a son of Bobby Unser and his second wife Norma. In 1968, Robby's father captured his first of three Indianapolis 500 wins and also won the USAC National Championship. Bobby Unser repeated championship victory in 1974 and Indy 500 victory in 1975, influencing on his son to become a race car driver.

Robby Unser started his racing career in 1976, at the age of 8, entering go-kart competitions. When he was 13, in 1981, he won the New Mexico International Karting Federation road-racing and dirt division titles. He raced stock cars in 1983-84, sprint cars in 1985 and the Skip Barber Pro-Saab Series, Formula Fords and sprint cars in 1986. In 1986, Robby also made a debut at Sebring 12 Hours, driving a GTO-class Pontiac Firebird for Highlands County Racing. 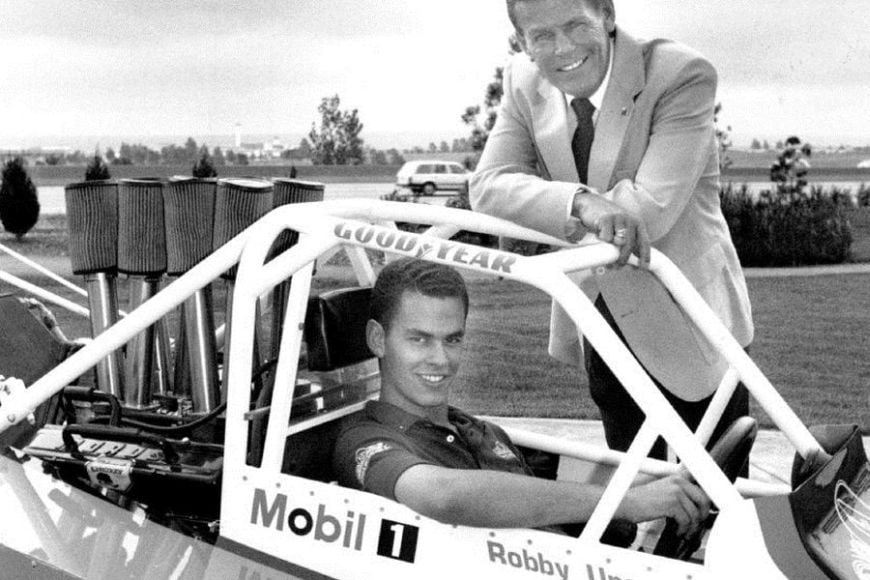 Robby Unser and his father Bobby

In 1988, Robby Unser made a debut in the Valvoline Machinists Union American IndyCar Series, finishing fourth in the championship won by Buddy Lazier. During a season, Unser scored one victory and four podiums. He was a race winner at Mountain View Motorsports Park in Mead, Colorado. In 1989, Unser was a dominant driver in the Machinists Union American IndyCar Series, winning twelve races in a Lola-Chevrolet.

In 1989, he also tried to make a debut in the CART Indy Car World Series, driving for Hemelgarn Racing at Laguna Seca. Driving the #91 car, he failed to qualify for the race.

In 1989, Robby Unser recorded his maiden victory at Pikes Peak International Hillclimb. He was an overall winner of the race in a Peugeot 405 Turbo 16, climbing to the summit of the mountain for 10 minutes 48.340 seconds.

He became a two-time winner in 1990, climbing to the mountain in the specially-prepared Unser Chevy. Over the years, Robby Unser became known as a racer who was driving self-built cars and trucks.

In February 1990, Robby made a debut at Daytona 24 Hours, driving the #17 Dauer Racing Porsche 962C. His teammates were Al Unser Jr. and Raul Boesel. They didn't finish the race due to an expired engine.

In February 1991, Robby returned to Daytona as a member of the all-Unser crew in the #0 Dauer Racing Porsche 962C. His co-drivers were Al Unser, Al Unser Jr. and his father Bobby. They didn't finish the race due to an accident.

The third overall victory at Pikes Peak came in 1992 when Robby was driving an Unser Bros Chevrolet in the Open Wheel class. He waited twelve years for the fourth overall win, conquering the mountain in 2004 with Subaru Impreza STI.

In the meantime, he scored five more Pikes Peak victories in different classes, such were Super Stock, Truck or Open Wheel.

In 1996, Robby Unser returned to North American open-wheel racing, joining PacWest Lights team to drive in the Indy Lights Series. He scored just one top 5 to finish 15th in the points.

Unser stayed with the team for one more season, not improving his results in 1997. He was among top 10 drivers six times, finishing again 15th in the final standings.

Robby Unser and his father ahead of 1998 Indianapolis 500

Later in the season, Unser scored his maiden Indy Car podium, finishing second at Texas Motor Speedway, behind John Paul Jr. At the end of the season, he was 16th in the points.

In 1999, Unser spent the IRL season with Team Pelfrey, driving the #81 Dallara-Oldsmobile. At Indianapolis 500, he started 17th and finished 8th, three laps behind race winner Kenny Brack. The highlight of the season was the second-place finish at Atlanta Motor Speedway, where Unser lost a race to Scott Sharp. At the end of the season, Unser was 10th in the points.

In 2000, Unser made three IRL starts with two different teams, failing to qualify for Indianapolis 500 in the #30 Riley & Scott-Oldsmobile of Byrd-McCormack Racing. His last IRL race was at Pikes Peak International Raceway in June 2000.