Indianapolis 500 – The Greatest (American) Race in the World

The history of Indianapolis 500 is closely connected with a history of the Indianapolis Motor Speedway because that race was the only annual event for decades, until 1994 when NASCAR came to Indianapolis. The IMS opened its doors in 1909, the first 500-mile race at 2.5-mile oval was held in 1911.

The first Indianapolis 500 was a result of a new marketing strategy which reduced the number of races from sixty in 1910 to only one main event in 1911. The last racing event besides 500-mile race was the Harvest Classic in 1916. Since then, until 1994 and NASCAR’s appearance at IMS, Indianapolis 500 was the only race at the world’s greatest race course. 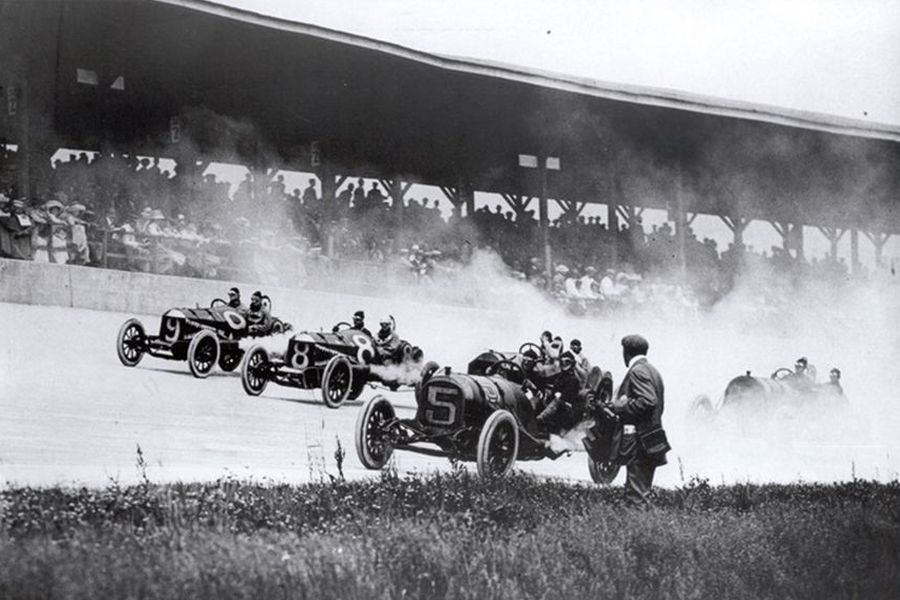 A picture from the first ever Indianapolis 500 race

40 participants in the first ever Indianapolis 500

The first 500-mile race held on Memorial Day on May 30th, 1911, was attended by 80,000 spectators. Forty cars started the race, led by the Stoddard-Dayton pace car, driven by IMS owner Carl Fisher.

It’s interesting that grid positions were determined by the date of filling the official entry form. Forty-six cars were on the list, forty of them qualified for the race by sustaining 75 mph (121 km/h) at the quarter-mile long main straight. 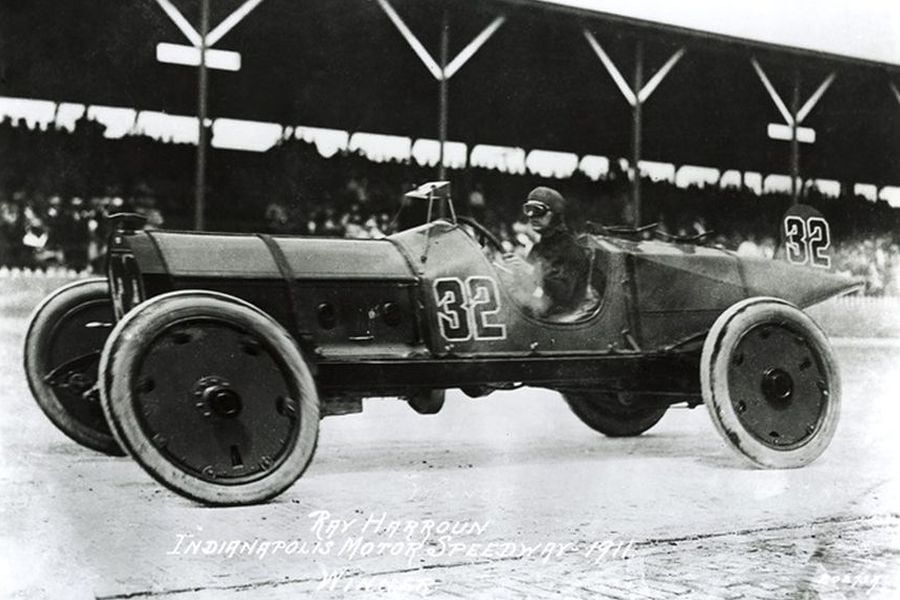 Ray Harroun was the first ever Indy 500 winner

Ray Harroun, an engineer for the Marmon Motor Car Company, came out of retirement to compete and he won the race. After the race, he retired from racing completely. Harroun was driving the #32 Marmon Wasp car equipped with 7.8-litre 6-cylinder Marmon engine. After 200 laps and more than 6 hours and 42 minutes of racing, he won with the average speed of 74.6 mph (120 km/h). Most of the drivers were racing with a riding mechanics in their cars, Harroun was racing alone. He was relieved by another driver Cyrus Patschke for approximately 35 laps at the halfway point of the race.

Unfortunately, the first ever Indianapolis 500 didn’t pass without fatal victims. On lap 12, Arthur Greiner’s Amplex hit the wall on turn 2 and his riding mechanic Sam Dickson was killed.Of forty starters, 14 didn’t finish the race. Only 12 cars completed all 200 laps. 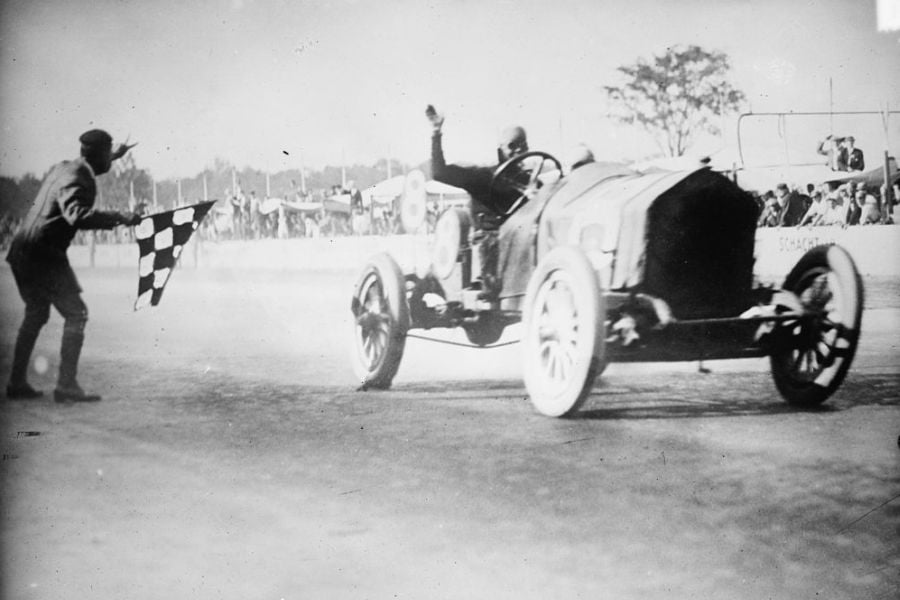 Since 1912, the number of entrants was limited to 33 and that number remained until today. In 1912, American Joe Dawson won the race and then, in 1913, the Frenchman Jules Goux became the first international winner, driving a Peugeot. Three more races were held before World War I stopped the racing activities in 1917 and 1918. All winners were non-American: Rene Thomas (France, Delage), Ralph DePalma (Italy, Mercedes) and Dario Resta (UK, Peugeot).

After the World War I, until new interruption due to World War II, all the winners except one were the Americans. The only non-American winner was the Frenchman Gaston Chevrolet in 1920. He was the younger brother of Louis Chevrolet, a founder of the Chevrolet company.

Shaw and Hulman saved the speedway and the race

During World War II, the track was abandoned and fell into disrepair. The owner Eddie Rickenbacker wasn’t interested in continuing the races, so, the three-times Indy 500 winner Wilbur Shaw started the campaign to find a new owner who would save the track.

Indianapolis 500 was a part of F1 championship

The races were continued and the track’s reputation grew so much that the Indy 500 became a part of the Formula One World Championship during a course of 10 years (1950–1960).

Although the race counted towards the F1 championship, non-American drivers refused to travel to the US, so the only one who competed was the 1952 F1 champion Alberto Ascari. In the season when he became the world champion, Ascari raced at Indy’s oval with Ferrari but retired after 40 laps. 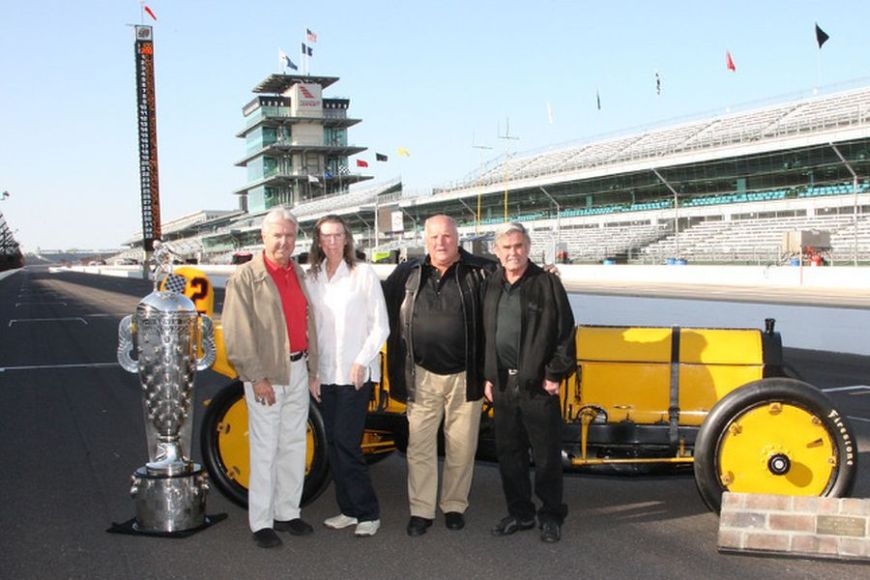 Championships were changing, the race was always there

In 1983, after four years of conflict and organizational disputes between USAC and CART, the Indianapolis 500 became the part of the CART Indy Car World Series and remained in that status until 1995. In 1996, the race became the part of the USAC-sanctioned Indy Racing League. In 2008, after an open-wheel unification of Indy Car and Champ Car, the race is the highlight of the season in the IndyCar Series. 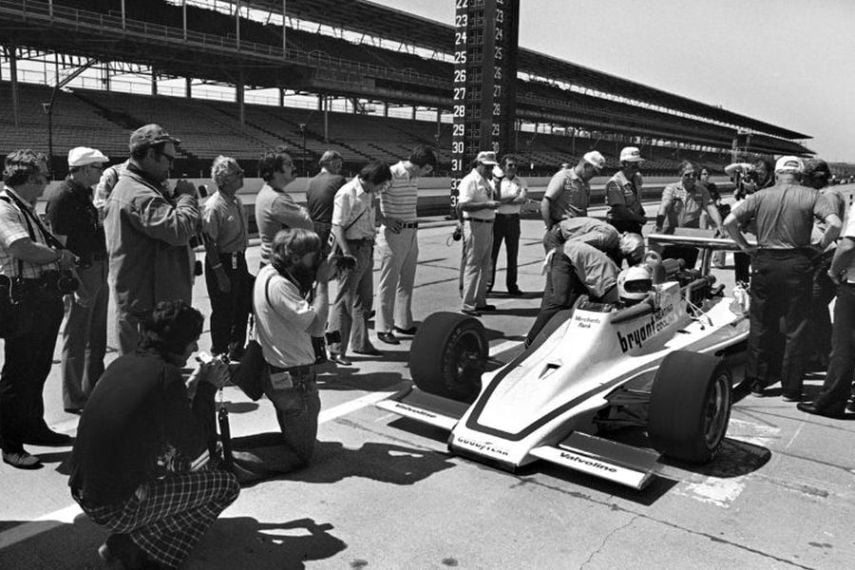 Janet Guthrie was the first female driver at Indy 500

For many decades of competition at Indianapolis Motor Speedway, the race organizers had a chauvinistic attitude against women, even forbidding female reporters to enter the pit lane area until 1971. In 1977, Janet Guthrie broke the gender barrier, becoming the first women to qualify for the Indy 500. In the race, she retired after 27 laps.

Graham Hill was only to win the Triple Crown

As one of the oldest and the most significant races in the world, the Indianapolis 500 is considered as a part of the Triple Crown of Motorsport, together with the 24 hours of Le Mans and Formula One Monaco Grand Prix. Seventeen drivers have competed in all three races but only one man in a history managed to win the Triple Crown – Graham Hill. 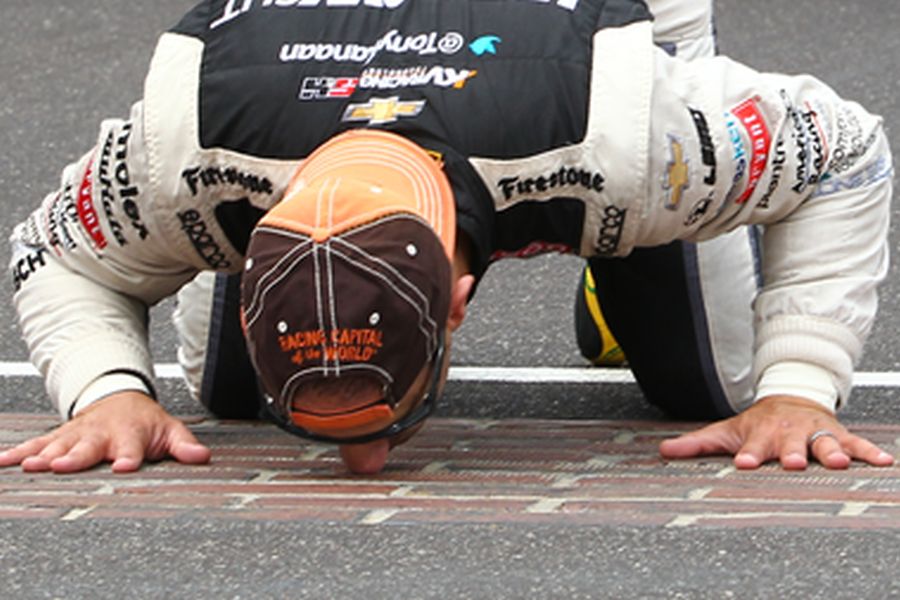 Kissing the Bricks is a privilege of winners

Indy 500 traditions: a bottle of milk, kissing the bricks…

Ladies and gentlemen, start your engines

The Indy 500 also has a traditional starting command in which someone from IMS management says „Gentlemen, start your engines!“ In 1977, following Janet Guthrie’s successful qualifying attempt, a controversy began to surround the famous starting command. The IMSA management didn’t want to change a command but they gave up under pressure. So, the command was „In company with the first lady ever to qualify at Indianapolis, gentlemen, start your engines.“ 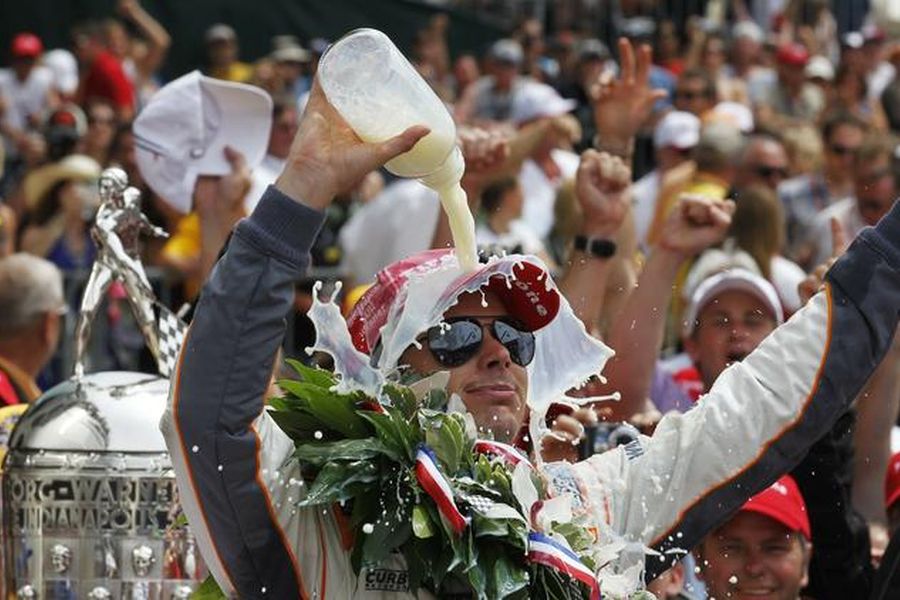 The main prize for the Indianapolis 500 winner, since 1936, is the Borg-Warner Trophy. It is named for and was commissioned by automotive supplier BorgWarner. The trophy features names and faces of race winners. It is permanently housed at the Indianapolis Motor Speedway Museum, winners get a replica. The amount of cash for the winner is also huge, a couple of million. The prize for the first ever winner back in 1911 was $14,250. 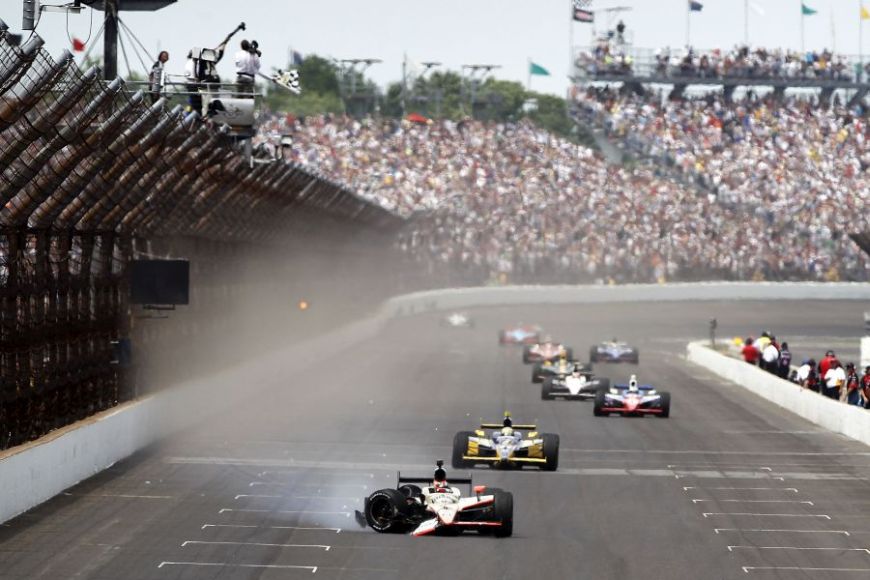 Unfortunately, such speeds are dangerous and Indianapolis 500 has a long list of fatal casualties during its centennial history, which placed the IMS among the most dangerous race tracks in the world. Eight years after the inaugural race and the first fatal victim, two drivers and one mechanic lost their lives in the 1919 edition of a race.

The 1931 edition also took three victims. During the practice, one driver and his mechanic lost their lives but the most unusual accident ever happened during the race. The rear tire from one car went off the track, jumped over the fence and killed the 11-year-old boy in a neighborhood. The 1930s were the worst decade in a history of race, with 23 fatal victims between 1930 and 1940.

In the following decades, deadly accidents weren’t so common but some famous drivers lost their lives during the Indy 500. After winning the race in 1953 and 1954, Bill Vukovich lost a life in a crash while leading the 1955 race. In 1959, Jerry Unser Jr., brother of Al and Bobby, was killed in a practice crash. Some other notable victims were Tony Bettenhausen (1961) and Mike Spence (1968). Scott Brayton was the last driver who lost his life during the Indianapolis 500. He won the pole position for the 1996 race and lost his life a few days later during the practice for the race.