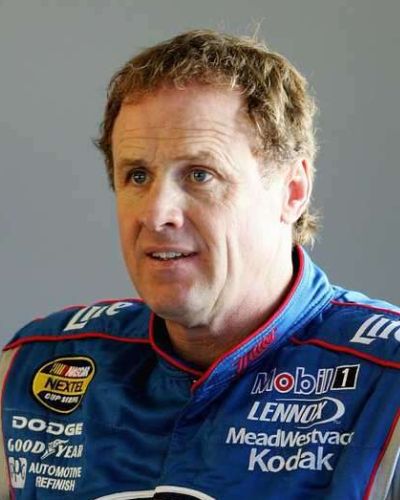 An American former stock car racing driver Rusty Wallace, who was active in NASCAR between 1980 and 2005, is one of the most charismatic individuals in the American premium stock car racing.

He participated in more than 700 races of the Winston/Nextel Cup Series, winning 55 times and taking the 1989 Winston Series title.

When he retired, his 55 wins put him in the eighth place on the all-time winners list. Most of those wins (34) were taken at short tracks, so Wallace is considered among the best short track drivers in the NASCAR's history.

In 1984, Rusty founded the RWI (Rusty Wallace Inc.) and that company is still in business. At the time of his racing retirement, Rusty's earning in races reached almost $50 million.

Member of the racing family

Russell William 'Rusty' Wallace was born on August 14, 1956, in St.Louis, Missouri. During the 1970s he raced on the short tracks, switching to the USAC Stock Car championship in 1979. He was the rookie of the year, finishing third overall in the points. Two years later, he was the USAC Stock Car runner-up, behind Joe Ruttman.

The #16 Penske Chevrolet was Rusty's first NASCAR car in 1980

1980 - Wallace debuted in NASCAR with Penske

Rusty debuted in NASCAR Winston Cup Series in March 1980 at Atlanta International Raceway, driving the #16 Chevrolet of Roger Penske and finishing second, behind Dale Earnhardt, who was later his biggest rival during his career. After a fantastic NASCAR debut, Rusty participated in eight more races in the next three years but also competed at the ASA (American Speed Association) Championship, winning the 1983 title.

Rusty's first full-season in NASCAR Winston Cup Series followed in 1984 when he joined Cliff Stewart Racing to drive the #88 Pontiac.  With four Top 10 finishes, Rusty finished 14th in the points and took the Rookie of the Year award. He stayed with Cliff Stewart's team for one more season, still missing the victories.

The maiden NASCAR victory came in 1986 when Rusty was driving the #27 Pontiac for Blue Max Racing team of Raymond Beadle. Wallace was the winner of Valleydale 500 at Bristol International Speedway. Later in the season, he scored one more victory at Martinsville Speedway, and finished sixth in the points.

In 1987, Rusty again won two times, at Watkins Glen and Riverside, and finished fifth in the points. In 1988, Wallace increased the number of season's victories to six and he finished second in the championship, 24 points behind Bill Elliott. Besides Winston Cup Series, Rusty competed occasionally in the Busch Series, collecting 25 races in four seasons with three different teams, including his own team.

And then, the 1989 season came. Rusty was again victorious in six races, but this time, it was enough to clinch his first and only Winston Cup title. Rusty won races at Rockingham, Richmond (twice), Bristol, Watkins Glen and Michigan, and took the title with just 12 points advantage over Dale Earnhardt. Wallace was also the winner of The Winson race (current Sprint All-Star Race), in which he spun out Darrell Waltrip in the last lap.

Since 1989, Wallace was the regular competitor in the International Race of Champions. After finishing 3rd in 1989 and 8th in 1990, he was the IROC winner in 1991. In the NASCAR, after the championship-winning season, Wallace spent one more year in the #27 Blue Max Racing's Pontiac, moving to the #2 Penske Racing's Pontiac in 1991. The #2 car remained Rusty's vehicle for fifteen seasons, until the end of his career.

Joining Penske in 1991 until the end of the career

In his first year with Penske, Wallace continued to win races, reaching the Victory Lane at Bristol and Pocono. He finished 10th in the points in 1991 and then 13th in 1992. The season 1993 was the most successful by the number of wins because Rusty won ten times (!), but it wasn't enough to win the championship, as Dale Earnhardt took his sixth title.

Rusty's victory at Bristol in April was the saddest one because his friend and 1992 champion Alan Kulwicki was killed in the airplane crash while traveling to the race. After winning the race, Wallace did a 'Polish victory lap' in respect to Kulwicki, turning his car and driving around the track the wrong way, because that made Kulwicki famous. Later in the season, every time Wallace won that year he did a 'Kulwicki victory lap'.

In 1994, Rusty was the winner eight times, but Dale Earnhardt again took the title, his seventh. Rusty finished third in the points. In the next couple of years, Rusty Wallace has always been near the top but never so close to the title as in 1993 and 1994. His best season result was 4th place in 1998. In every Winston Cup Series he participated between 1986 and 2001, Rusty won at least one race, he managed to set the streak of sixteen consecutive years with victories in the premium NASCAR series.

In the Busch Series, he competed occasionally with his own team until 2005, collecting 42 participations in total, but he never won a race. His best Busch Series result was the second place at 1989 Goody's 300 at Daytona International Speedway. In the Craftsman Truck Series, Rusty had only one participation during his career. He raced with Penske's #22 Ford at Nazareth Speedway in June 1996, finishing ninth.

Rusty celebrates his last victory at Martinsville in 2004

After sixteen consecutive years of scoring victories in the NASCAR Winston Cup Series, Rusty was without wins in 2002 and 2003. His last win in a career came in April 2004, in the Advance Auto Parts 500 at Martinsville Speedway. Rusty led for 45 of 500 laps before he crossed the finish line as the winner, ahead of Bobby Labonte and Dale Earnhardt Jr.

The season 2005 was the last for Rusty in the #2 Miller Lite-sponsored Dodge. In his last season, Wallace was eight times among top 5 finishers and he finished 8th in the final points.

Rusty's career was marked also by few major crashes, most of them at Daytona International Speedway. In 1983, he was hospitalized after a crash during a qualifying race for Daytona 500. The next major accident happened at Bristol Motor Speedway in 1988 when his car flipped out to the wall.

In 1993, he crashed at Daytona and Talladega. In both races, his car went airborne and flipped several times. The last airborne crash happened during a qualifying race for Daytona 500 in 2005.

After retiring from stock car racing, Rusty started working as TV commentator but returned to the race track one more time, to compete at 2006 Rolex 24 at Daytona. He raced the #2 Crawford-Pontiac prototype for Howard-Boss Motorsports, partnered by Jan Lammers, Danica Patrick and Allan McNish. They didn't finish the race due to overheated engine. Wallace's last competitive appearance happened in April 2015, when he participated in the truck races at X Games in Austin.

In 2005, Wallace became the first driver in recent history to design a professional racing facility. He was hired to draw Iowa Speedway in Newton, which was opened in 2006. Wallace is also a board member of The NASCAR Foundation.