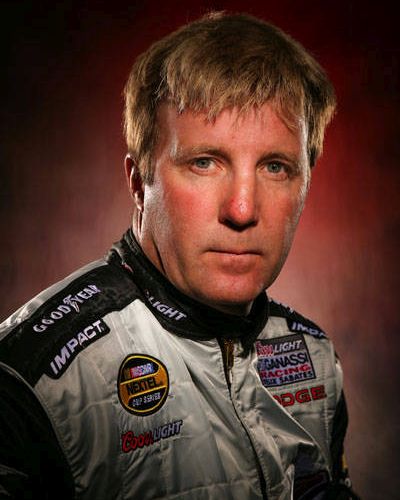 Sterling Marlin is an American stock car racing driver who spent more than 30 years in NASCAR, recording 825 starts in two national series between 1976 and 2009. He won twelve times, including two victories at Daytona 500 in 1994 and 1995. His career-best seasons were 1995 and 2001 when he was third in the final championship standings of Winston Cup Series.

Sterling Marlin was born on June 30, 1957, in Columbia, Tennessee. His father Clifton Coo Coo Marlin (born 1932) was also the stock car racer who recorded 165 Grand National and Winston Cup Series starts between 1966 and 1980.

Starting a career as a replacement for father

During the high school years, Sterling was playing basketball and football and wasn't interested in racing. His racing debut came unexpectedly when he jumped into H.B. Cunningham's  #14 Chevrolet Monte Carlo which his father was usually driving. Due to Coo Coo's injuries the team was looking for a replacement at Nashville Speedway's Music City USA 420 race.

In his first race, Sterling Marlin started 30th on the grid and retired after 55 laps due to broken oil pump. Sterling returned to the race track with #14 Chevrolet two times in 1978 and one time in 1979.

In February 1980, Sterling debuted at Daytona 500, bringing the #14 Chevrolet to 8th place. Later in the season, he recorded four more Winston Cup Series starts with three different cars. His best result was the 7th place in the Busch Nashville 420 race, where he was driving the #40 Chevrolet for Ulrich Racing.

Marlin also competed regularly in the Nashville Speedway track championship, becoming the champion for three years in a row, from 1980 to 1982.

Sterling was the 1983 Winston Cup Series rookie of the year

The first full NASCAR season followed in 1983 when Sterling Marlin was hired by Roger Hamby to drive his # 17 Hesco Exhaust-sponsored Chevrolet or Pontiac. In 30 races, Marlin scored one Top 10 finish, at Dover Dover International Speedway. At the end of the season, he was 19th in the points and took the Rookie of the Year award.

In February 1983, Marlin had his sports car racing debut, participating at Daytona 24 Hours. He was sharing the #72 Chevrolet Corvette with Gary Baker. They didn't finish the race because of an accident.

Marlin returned to Daytona 24h two more times. In 1984, he and Baker were driving Corvette again, finishing in 38th place (11th in GTO class). In 1988, Marlin was driving Tiga GT286 prototype for Brown Racing, sharing the car with Bobby Brown, Ron Nelson and Billy Hagen. They didn't finish the race.

In 1984, Marlin started the season driving the #10 Chevrolet for Hamby Racing at Daytona 500, finishing in 15th place. Later in the season, he spent most of the time in the #95 Chevrolet/Oldsmobile of Sadler Brothers Racing. His best result was the 8th place at Bristol International Speedway.

In 1985, Marlin had eight starts, seven of them with Sadler Brothers. His best finish was the 12th place at Talladega Superspeedway. In 1986, Sterling participated in ten races with #1 Chevrolet owned by Hoss Ellington. At Daytona's Firecracker 400, he finished in second place, behind Tim Richmond.

Sterling Marlin returned to full-time driving duties in 1987 when he was hired by Billy Hagan to drive the # 44 Piedmont Airlines-sponsored Oldsmobile. In his first season with Hagan Racing, Marlin recorded four Top 5s and finished 11th in the points. He stayed one more season in the #44 car, finishing 10th in the points in 1988.

On October 6, 1990, in the All Pro 300 race at Charlotte Motor Speedway, Marlin scored his maiden NASCAR victory, after leading 54 of 200 laps. After winning the race in the Busch series, Marlin had to wait for his maiden Cup Series win until 1994 Daytona 500.

In the meantime, between those two wins, Sterling Marlin spent two seasons with Junior Johnson's team and one season with Stavola Brothers Racing. He was driving Junior Johnson's #22 Ford Thunderbird in 1991 and 1992, scoring thirteen Top 5 results and finishing 7th (1991) and 10th (1992) in the points. Marlin scored his first pole position at Daytona's Pepsi 400, adding six more poles with #22 car.

In 1993, Marlin's car was the #8 Raybestos-sponsored Ford. With that car, he had just one top-five finish, dropping to 14th place in the final standings.

Sensational victory for Marlin at 1994 Daytona 500

For the 1994 season, Sterling Marling joined Morgan-McClure Motorsports to drive the #4 Kodak-sponsored Chevrolet. In his first race with the team, he sensationally won Daytona 500. Ernie Irvan was leading for most laps (84) but Marlin beat him.

Marlin finally won a Winston Cup race in his 279th start, after being in the second place eight times. He broke Dave Marcis' previous record for most starts before his first Cup win (227 starts). It remained Marlin's only win in 1994 and he finished 14th in the points.

At 1995 Daytona 500, Marlin won again, becoming one of only three drivers who won consecutive Daytona 500s. The other two are Richard Petty and Cale Yarborough. Marlin was also the only driver who had his first two career wins at Daytona 500.

Marlin won two more times during the 1995 season, at Darlington Raceway and Talladega Superspeedway, scoring a career-best finish in the point standings. He finished in third place in the Winston Cup Series, behind Jeff Gordon and Dale Earnhardt.

In 1997, he did not return to victory lane and dropped to 25th place in the final standings. After four seasons with Morgan-McClure Motorsports, Marlin left at the end of 1997 season.

For the 1998 season, Felix Sabates hired Marlin to drive the # 40 Coors Light-sponsored Chevrolet for SABCO Racing. He failed to qualify for the fourth race of the season, the Primestar 500 at Atlanta Motor Speedway, which was Marlin's first DNQ since 1986.

A time spent with SABCO Racing wasn't so successful, as Marlin scored only three Top 5 results in three years. He was closest to victory in the 2000 Save Mart/Kragen 350 at Sonoma Raceway, finishing second behind Jeff Gordon.

In 2001, Chip Ganassi purchased the majority of ownership of SABCO Racing. Marlin stayed in the #40 Coors Light-sponsored car, but Chip Ganassi Racing replaced Chevrolet with Dodge Intrepid. The start of the season was marked by Marlin's win in the Gatorade 125 qualifying race at Daytona and his participation in the fatal accident of Dale Earnhardt at Daytona 500.

In the next couple of days, Marlin and his family received death threats from angry fans who felt that Marlin was responsible for Earnhardt's death. He was publicly defended by Earnhardt's son and teammate Michael Waltrip and was also cleared by NASCAR.

Later in the season, Marlin won two races with #40 Dodge, at Michigan International Speedway and Charlotte Motor Speedway. He finished third in the final standings, repeating his career-best finish from 1995.

In 2002, the season started again with a crash at Daytona 500. This time, Marlin and Jeff Gordon were involved. Marlin finished second in the next race at Rockingham and then won the race at Las Vegas Motor Speedway. Two rounds later, Marlin won the Carolina Dodge Dealers 400 at Darlington Raceway, which would be his final Cup Series win in a career.

The 2002 season ended prematurely after Marlin suffered serious injuries at Kansas Speedway's crash. Before that, he was in a fight for a title, but after he missed seven races he finished 18th in the points.

Driving for Chip Ganassi until 2005

Marlin missed one race in 2005, in August at Watkins Glen, because he attended the funeral of his father who died of lung cancer one day before the race.

Number 14 on a car in tribute to father

For 2006 season, Marlin joined MB2 Motorsports. In tribute to his late father, Marlin managed to have #14 on his Waste Management-sponsored Chevrolet. He had only one Top 10 result, the 9th place at Richmond and he finished 36th in the final standings.

In 2007, Marlin switched #14 to Ginn Racing, participating in 19 races. Marlin's run in the #14 Chevrolet ended in July when Ginn Racing announced Regan Smith would replace him. At the end of the season, Marlin managed to qualify Phoenix Racing's #09 car at Phoenix International Raceway and Homestead-Miami Speedway.

Retiring from professional racing in 2010

In the next two seasons (2008 and 2009), Marlin had many unsuccessful qualifying attempts with Phoenix Racing's #09 and Chip Ganassi Racing's #40. However, he recorded 16 more Cup Series starts in those two seasons. His last race was the TUMS Fast Relief 500 at Martinsville Speedway on October 25, 2009, where he was driving Phoenix Racing's #09 Dodge.

Marlin announced his retirement from racing in March 2010. He focused on his business, leading a Dodge dealership in Dickson, Tennessee. However, he occasionally participated in some racing events, such as Pro Late Model Division races or Jegs/CRA All-Star Tour.