Currently, Hendrick Motorsports is running four Chevrolet Camaro ZL1 cars in the Monster Energy NASCAR Cup Series – the #9 for Chase Elliott, the #24 for William Byron, the #48 for Jimmie Johnson and the #88 for Alex Bowman. 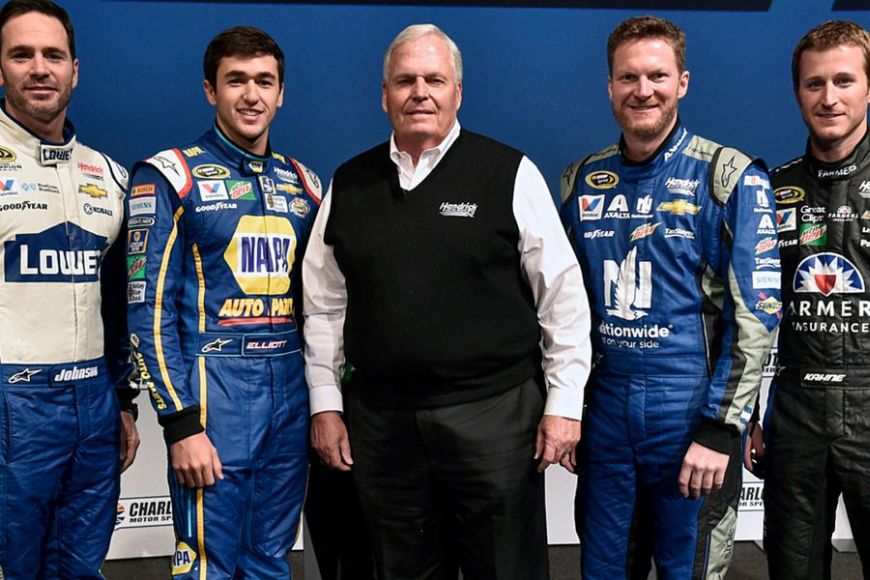 Rick Hendrick and his drivers in the 2017 NASCAR season

Joseph Riddick “Rick” Hendrick III was born on July 12, 1949, in Warrenton, North Carolina. He started a racing career at the age 14 and quickly became a speed record holder at a local drag strip with a self-built 1931 Chevrolet. Two years later, he won the Virginia division of the Chrysler-Plymouth Troubleshooting Contest, a competition for engine builders.

From car dealership to 10,000-employee company

The next project was an opening of a small used-car lot with Mike Leith, an established dealer in the area. The 23-year-old Rick soon became the general sales manager. In 1976, Hendrick took a chance by selling off his assets to purchase a struggling franchise in Bennettsville, South Carolina, thus becoming the youngest Chevrolet dealer in the United States. Once troubled location soon became the region’s most profitable. Bennettsville’s success was a precursor to Hendrick Automotive Group, which still operates today, employing more than 10,000 people.

As his automotive business steadily grew, Hendrick was entering different motorsports competitions. In the late 1970s, he founded a drag-boat racing team that won three consecutive national championships and set a world record of 222.2 mph with the boat “Nitro Fever”.

In the auto racing, Hendrick sponsored and co-owned a limited number of NASCAR Late Model Sportsman Series (now Xfinity Series) entries. One of his drivers was Dale Earnhardt, who won the race at Charlotte Motor Speedway with Hendrick’s car. 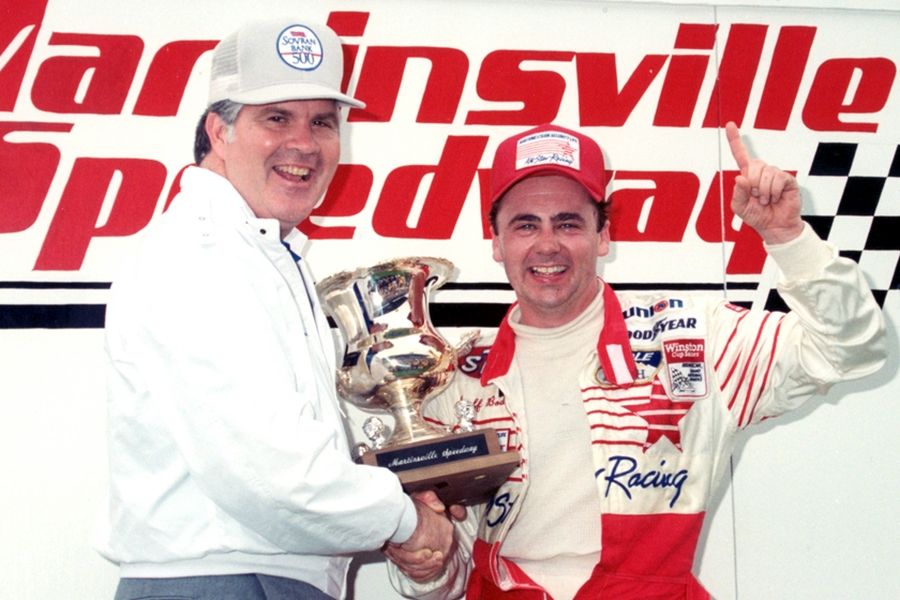 All-Star Racing was founded in 1984

Geoff Bodine was Hendrick’s first driver, who participated in the 30-race season of the NASCAR Winston Cup Series with unsponsored #5 Chevrolet Monte Carlo. Bodine earned three poles and scored three wins and finished ninth in the championship points. The team’s maiden victory came at Martinsville Speedway in March, saving the team from bankruptcy. Thirty years later, Hendrick admitted: „If we hadn’t won that race, then literally the next Monday we were going to shut it down“. 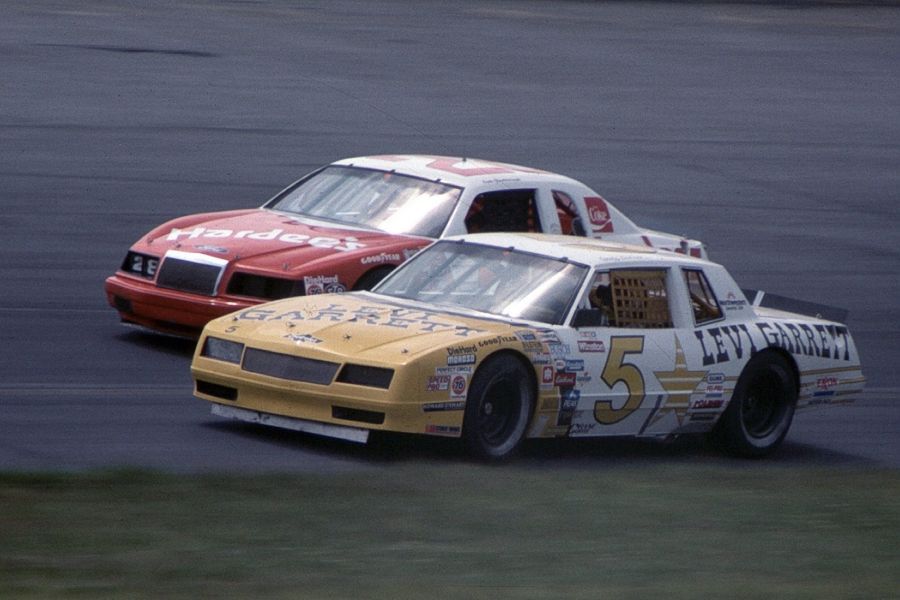 Renaming to Hendrick Motorsports in 1985

The team started to use Hendrick Motorsports name in 1985, continuing to run #5 Chevrolet for Geoff Bodine and signing a multi-year sponsorship deal with Levi Garrett tobacco brand. Despite not winning the race that year, Bodine earned three poles and improved to fifth in final standings.

Hendrick expanded into a multi-car team full-time in 1986, with Geoff Bodine in the #5 and Tim Richmond in the #25 car. The #25 was owned for many years by Rick Hendrick’s father, the late Joe “Papa” Hendrick.

Tim Richmond won seven races in 1986 and finished third in points. Bodine won twice in the #5 and finished 8th in the points. One of his wins was at Daytona 500, which was the first win for the team at the greatest NASCAR race. 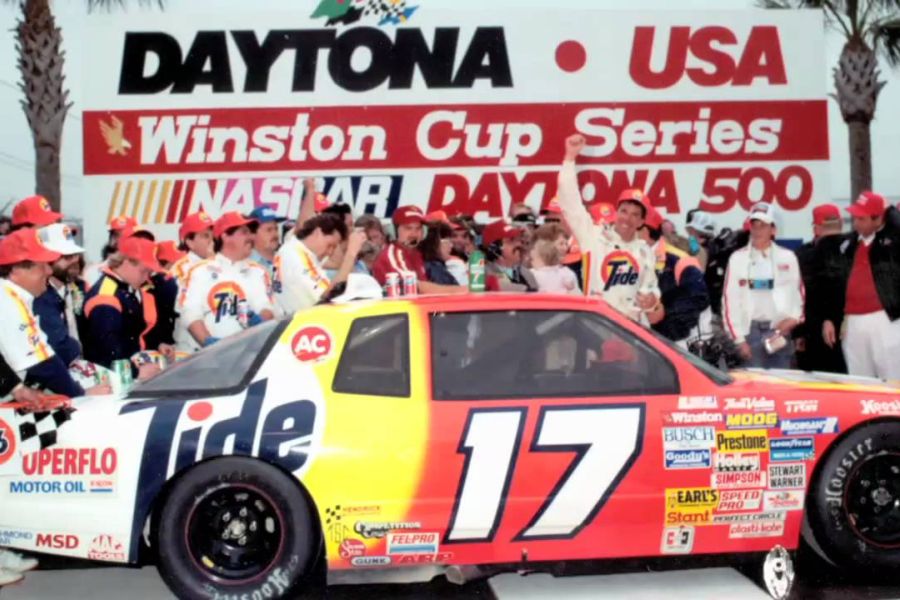 For the 1987 NASCAR Winston Cup season, Hendrick Motorsports expanded to three cars. The third car was the #17 Chevrolet, which came to the team when Darrell Waltrip left Junior Johnson’s team at the end of 1986. Waltrip chose to join Hendrick Motorsports with Tide as his sponsor. In his first season with Rick Hendrick, Waltrip won one race and finished 4th in the points.

Tim Richmond missed the beginning of the 1987 season due to HIV/AIDS, but he was saying that he was suffering from pneumonia. Benny Parsons drove the first 11 races of the season, with the car renumbered 35. Richmond returned in the mid-season, participating in eight races and winning two times. The third driver, Geoff Bodine, scored no wins in 1987.

Tim Richmond left the team after eight races in 1987, because of a bad health. He died in August 1989. He was replaced in the #25 car by Ken Schrader, who spent nine seasons with the team, until 1996. In that period, he scored four wins.

Darrell Waltrip was successful in the #17 car, winning two races in 1988 and six races in 1989. One of his wins in 1989 was at Daytona 500. At the end of 1990, Waltrip decided to start his own team, so he left Hendrick Motorsports, taking the #17 with him. The Tide sponsorship moved to the #5 team with Ricky Rudd as the driver.

Ricky Rudd and Terry Labonte in the #5 car

Ricky Rudd replaced Geoff Bodine in the #5 car in 1990, staying with the team for four seasons. He won one race each year. His best result in the championship was the second place at the end of 1991.

In 1994, Terry Labonte joined Hendrick Motorsports to drive the #5 Chevrolet. He spent eleven seasons driving that car. In 1996, he captured his second Winston Cup Series title and the second title for Hendrick’s team. The first Hendrick’s champion was Jeff Gordon one year before. 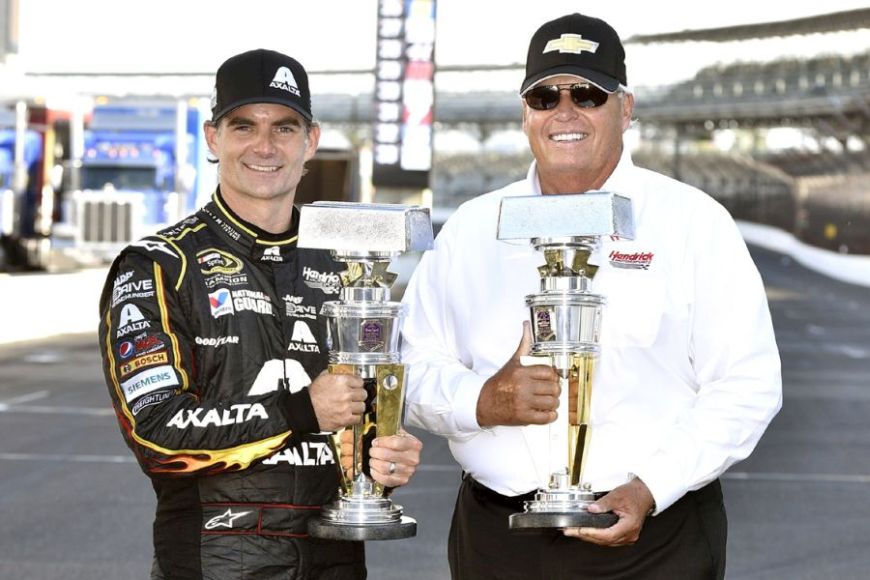 Jeff Gordon joined Hendrick Motorsports in 1992, debuting at Hooters 500 with DuPont-sponsored #24 Chevrolet. Gordon’s first full season was in 1993 when he earned his first pole. The maiden victory came in 1994 at Coca-Cola 600. Later in the season, Gordon won the inaugural Brickyard 400 at Indianapolis.

The first championship title for Jeff Gordon followed in 1995 after seven race wins. In 1996, Gordon won ten times but lost a title to teammate Labonte. Then, in the next couple years, Gordon was again the best driver, taking two consecutive titles, scoring 10 wins in 1997 and 13 wins in 1998. Gordon’s fourth championship title came in 2001. 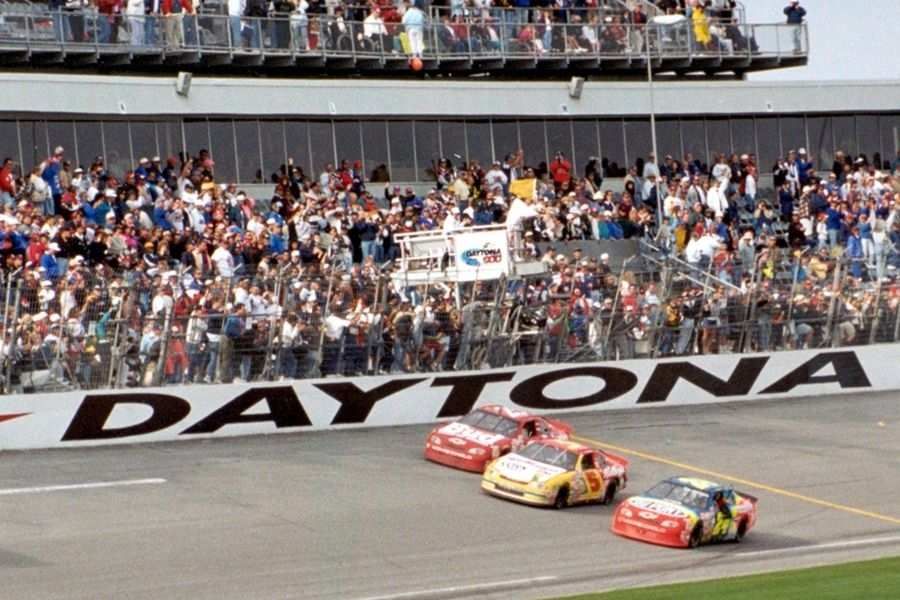 The season of 2001 was the year when Jimmie Johnson joined Hendrick Motorsports, participating in three races with #48 Chevrolet. The first full season followed in 2002. Johnson was immediately among the front-runners, winning three races and finishing 5th in the points. Johnson lost Rookie of the Year award to Ryan Newman.

Johnson was a championship runner-up two times, in 2003 and 2004. Matt Kenseth was a champion in 2003, despite winning only one race, against Johnson’s three wins. In 2004, Johnson had eight wins but he lost the championship by only eight points to Kurt Busch. 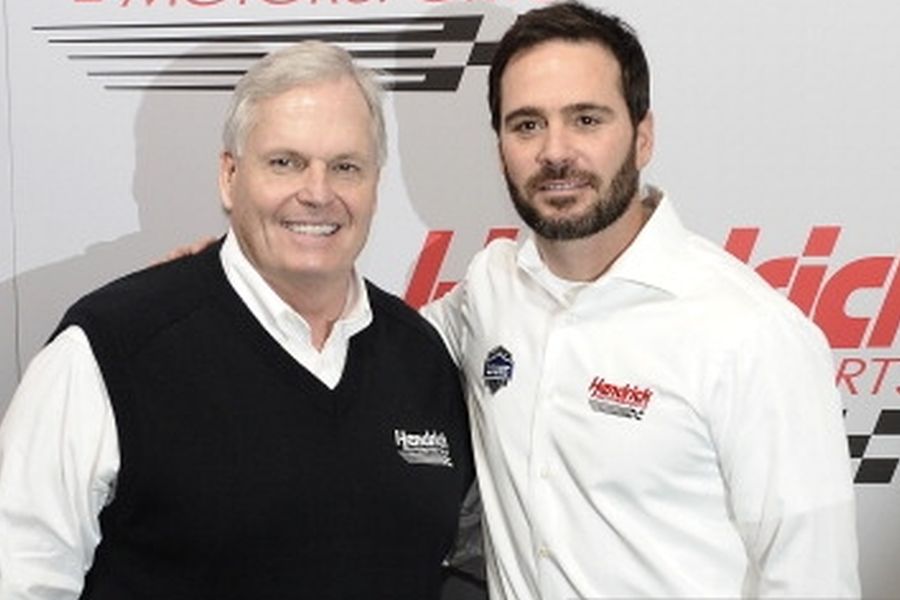 In 2002, Hendrick expanded for the first time to four cars, fielding the #60 Chevrolet jointly with Gene Haas. In 2003, the #60 returned as R&D car. In 2004, Kyle Busch took over the car and selected the number 84. In the next two seasons, Terry Labonte was driving part-time schedule with #44 car. 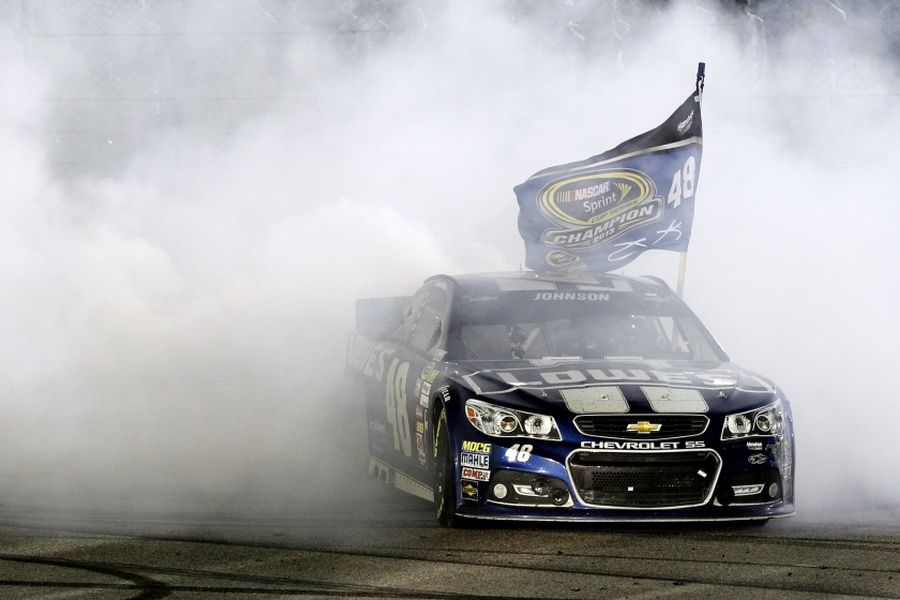 Jimmie Johnson took all his seven titles with Hendrick Motorsports

After being close to the top for four seasons, Jimmie Johnson finally captured his first championship title in 2006. He won five races that season. In 2007, Johnson doubled up his number of wins, finishing ten times in the Victory Lane and taking the back-to-back title. Johnson’s fantastic streak continued with three more Sprint Cup titles from 2008 to 2010. In that period, he won 12 races.

In the next two season, Johnson was watching how Tony Stewart and Brad Keselowski were winning the titles. In 2013, Johnson was the winner again, the sixth time in a career. After two more years of waiting, the seventh title came in 2016. With that triumph, Johnson tied Richard Petty and Dale Earnhardt on the top of the all-time winner’s list. 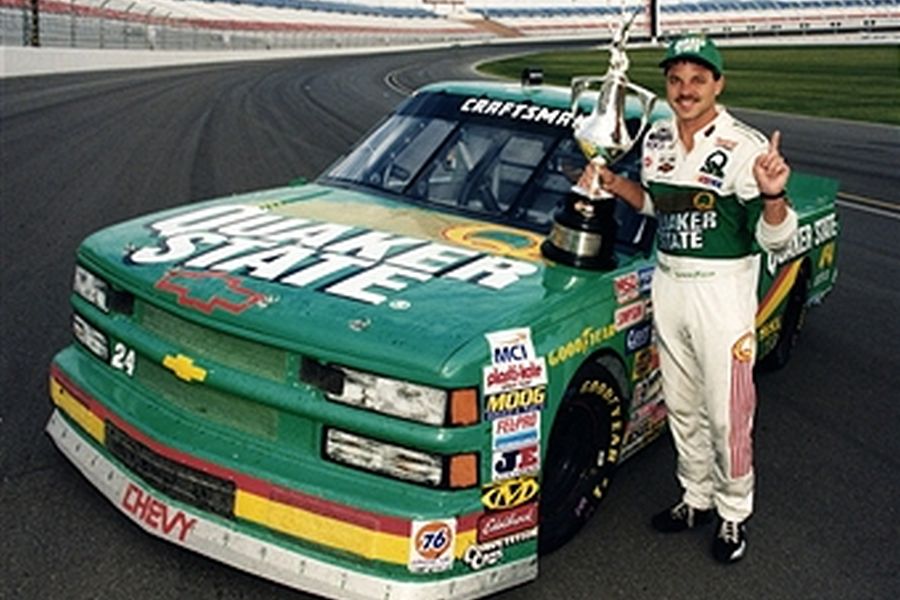 Besides having three champions with 12 Cup Series trophies, Rick Hendrick also led two drivers to the top in other two NASCAR’s national competitions. In 1997, Jack Sprague captured his first Truck Series title with #24 Chevrolet. In 1999, he won the championship again. The same driver won 2001 Truck Series, moving after that to the Busch Series.

In the Busch Series, the 19-year-old Brian Vickers scored three wins with #24 Chevrolet and won the only title in that series for the team.

The history of Hendrick Motorsports is full of happy moments but one tragedy overshadowed all that. In October 2004, ten people associated with Hendrick Motorsports lost their lives in a plane crash traveling from team base in Concord to Martinsville Speedway. The plane crashed in heavy fog into Bull Mountain, seven miles from the Blue Ridge Airport in Stuart, Virginia. 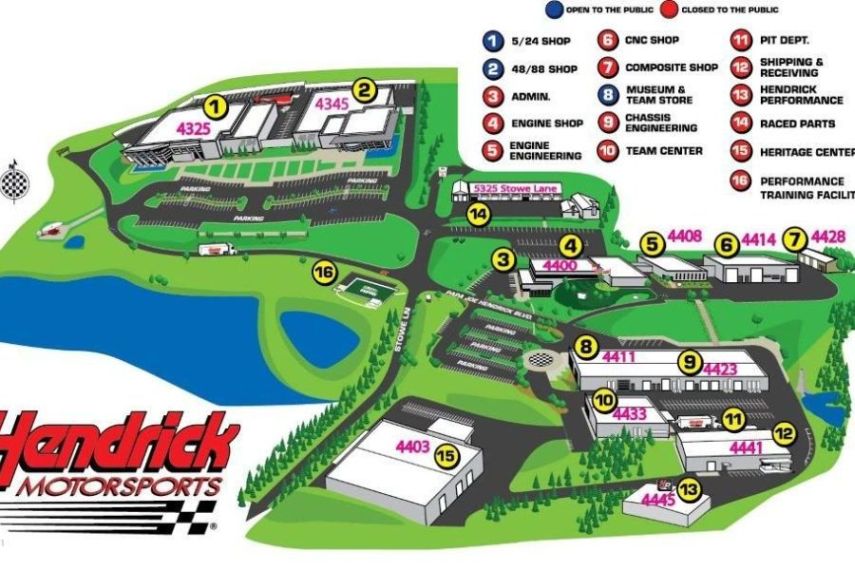 Hendrick’s HQ and museum are worth to visit

Hendrick Motorsports welcomes visitors at no charge, and fans are encouraged to view their race shops during normal hours of operation. Also open to the public is the Hendrick Motorsports Museum &ampTeam Store, showcasing many years of the team’s history.