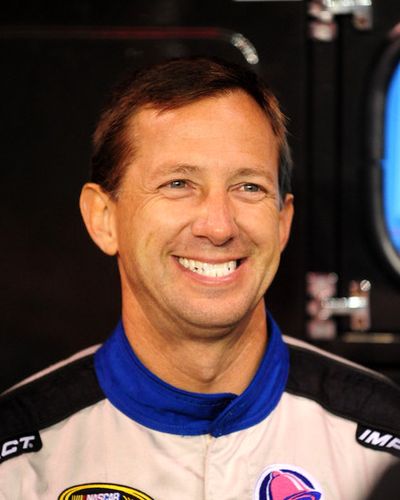 The Andretti racing dynasty is the most recognizable because of F1 champions Mario Andretti and his son Michael, the Indy Car champion and the team owner, but there were six more Andrettis who left a trace in the America's motorsport history. When comparing the numbers and career results, John Andretti is the third most successful racer among all Andrettis.

John was also the most versatile among them because he competed in all forms of racing, including midgets, stock cars, open-wheel cars, sports cars and dragsters. He recorded the most races in NASCAR, scoring two wins in more than 430 starts. He also scored one victory in the Indy Car series.

Under the influence of his father and uncle, but also Godfather AJ Foyt, John Andretti entered his first race at the age of 9. One of the main rivals in the go-karts was his cousin Michael. John's first competition with big cars was the 1983 USAC National Midget Series. He became the rookie of the year and won the regional midget championship.

John showed diversity since the beginning

Even in his early days, John Andretti showed that diversity is going to be his main characteristic. He competed in the Formula Vee, Can-Am Series, USAC Sprint Car Series, but his main focus laid in the IMSA GTP Championship in which he debuted in 1984, driving the A-B Engineering's Argo JM16-Ford. In the next two years, he was driving the March-BMW prototypes, claiming the biggest success at 1985 Watkins Glen 500-km race, winning the race together with Davy Jones.

In 1987, John Andretti entered the first league of the American open-wheel racing, the CART Indy Car World Series. He was driving for Curb Racingin the last five rounds of the championship, finishing four times in the Top 10. Together with cousin Michael, he had a one-off appearance in the IMSA GTP race at Mid-Ohio, driving the Chevrolet Corvette GTP for Hendrick Motorsports.

Michael, Mario and John at the 1988 Le Mans race

Andrettis competed together a lot, but the best of their joint performances was recorded at the 1988 24 hours of Le Mans. Mario, Michael and John Andretti were driving the #19 factory-entered Porsche 962C. They finished sixth overall, which remained John's best result at Le Mans.

In the 1988 Indy Car season, John continued to drive for Curb Racing and participated for the first time in the Indianapolis 500 race. The mechanical issues forced him to retire. The whole season was full of retirements and he finished 31st among 36 drivers who collected points.

The 1988 season was also marked by John's trip to Australia to compete in the famous Bathurst 1000 race. He partnered Garry Rogers in the GRM's #33 Holden, but the pair retired after just 37 laps.

One of John's greatest victories followed in February 1989, at the Daytona 24-hour race. He partnered Bob Wollek and Derek Bell in the Miller High Life/BF Goodrich-sponsored #67 Porsche 962 and they won ahead of the Castrol Jaguar Racing's XJR-12. For the rest of the IMSA GTP season, John competed with Busby Racing's Porsche 962 and finished fifth in the points. In the Indy Car Series, he was driving Lola-Buick for Vince Granatelli, but without notable results.

In 1990, John Andretti joined Porsche North America team to drive the #41 car in the CART Indy Car World Series. He finished fifth in two races, at Cleveland and Vancouver, and for the first time, he was among top 10 drivers.

The season of 1991 started one more time with three Andrettis competing together: Mario, Michael and John were sharing the Jochen Dauer Racing's Porsche 962 C at February's Daytona 24h. They didn't finish the race due to overheating, but they were classified as fifth.

One and only IndyCar victory for John

The highlight of John's Indy Car career came in March 1991 at the Surfers Paradise Street Circuit in Australia. It was the opening round of the 1991 Indy Car Series and John claimed his maiden victory, driving the #4 Lola-Chevrolet for Hall-VDS Racing.

It's interesting that four Andrettis were participating in that race (John, Jeff, Mario and Michael). Michael started from pole and finished 14th, Jeff was 7th, Mario was 17th.

Later in the season, John scored his career-best result at Indianapolis 500, finishing fifth. He scored one more podium, finishing second at Milwaukee Mile, and took the 8th place in the final classification. The race at Milwaukee Mile was, as known, the only race in history when three members of one family swept the podium in some premier competition: Michael was first, John second and Mario third.

The 1992 Indy Car season ended with John's seventh place in the final standings, which was his career-best result. He didn't score any wins or podiums, but eleven Top 10 finishes earned him a high place. The season of 1992 was John's last in the open-wheel racing, and since then, he switched the focus to stock car racing, returning to Indianapolis 500 seven more times between 1993 and 2011.

Among all other competitions, John also tried drag racing. He participated in a few races of the 1993 NHRA Winston Drag Racing Championship, reaching the semifinals in his first event at Atlanta. He set the top speed of 299 mph (481 km/h).

The NASCAR Winston Cup Series debut followed in October 1993 at North Wilkesboro Speedway, in the Tex Racing's #72 Chevrolet. John participated in the last five races of the season, then switched to the #14 Hagan Racing Chevrolet for the full 1994 season.

On May 29, John became the first driver in history who raced in both the Indianapolis 500 and the Coca-Cola 600 on the same day. He finished 10th in the Indy Car race and 36th in the NASCAR race. In the last eleven races of the NASCAR season, John was driving the #43 Ford for Richard Petty. His best result was 13th place in the season-closing race at Atlanta Motor Speedway.

In 1997, John clinched his maiden NASCAR victory, finishing first in the Pepsi 400 race at Daytona International Speedway. Other results weren't so good and he finished only 23rd in the points.

In 1998, John again joined Petty Enterprises, and drove the #43 Pontiac, and it became his career-best NASCAR season. He finished 11th in the points, collecting ten finishes among ten fastest drivers. In 1999, he was again ten times among Top 10 drivers, including his second NASCAR win. It was in April at Martinsville Speedway.

John Andretti stayed with The King (Richard Petty) until 2003. He left the team in the mid-season 2003, changing three more teams and four cars until the end of the season.

Full season in the 2006 Busch Series

In the next two years, John competed part-time with different teams in the Nextel Cup and Truck Series. He returned to compete full-time in the 2006 Busch Series with Greg Pollex's #10 PPC Racing Ford. In 35 races, John finished four times among top 10 finishers and took the 12th place in the final classification.

In 2007, John collected 15 races in the NASCAR Nextel Cup Series with three different teams, then joined Front Row Motorsports for the 2008 season. He failed to qualify in seven races and participated in three races, finishing at the back of the field. In 2009, the results with the #34 Front Row's Chevrolet were slightly better, as he reached top 20 three times. John's last NASCAR Sprint Cup race in his career was Daytona 500 in February 2010.

John Andretti competed at Indianapolis 500 until 2011

In 2007, John returned to Indianapolis 500 for the first time since 1994. He drove for Panther Racing and finished 30th. In 2008, he was driving for Roth Racing at Indy 500 and four more races of the IndyCar Series.

John competed at Indianapolis for the last time in 2011, driving the #43 Dallara-Honda for the joint team of Richard Petty and Michael Andretti. John started 17th and finished 22nd.

In recent years, John Andretti had two participations at Daytona 24h. In 2008, he was a member of the Vision Racing's crew in the Crawford DP03-Porsche prototype. In 2012, he competed in GT class with Yellow Dragon Motorsports' Mazda RX-8. John retired in both races.

John died in January 2020, losing a battle with cancer.